Lebanon is Falling. Can Russia save the country?

“Moscow and Beirut are involved in energetic talks as the country, now a failed state, adds to the chaos of the region,” says Simon Baldock, an Israeli security expert.

“Russia fears the potential for Lebanon to fall into the hands of multiple terrorist factions, much the same as parts of Syria did during the civil war, such as the Islamic State which still has a foothold in Lebanon. Meanwhile multinational surrogates are all activated to both assist but also to see if they can seize the country to avert more trouble and for other reasons which vary. Among the Americans, French, British and Iranians there is a confluence of interest. It’s not healthy. The growing presence of Russia is strongest and  the Bashar al Assad regime shores up the Russian influence,” the former Israeli defence forces intelligence expert adds.

“Russia has a centuries old relationship with Lebanon and in the past five years it has been arming the Lebanon military and also Hezbollah,” he notes. “The apocalyptic mushroom cloud over Beirut on 4 August 2020 has been noticed worldwide, but Russia is already there in a big way.”

Note: FPMag writers and team members report from Beirut that if any humanitarian workers  are near the catastrophe site in Beirut, or headed there, they should please read: Wear a mask. Wear a NIOSH N95 & be climate conscious and do the included tutorial and online course on wearing a respirator. Apparently the environment can at times be quite toxic.

This is a mess, far worse than the apocalyptic disaster that meets the eye.

“The Treaty of Adrianople concluded the Russo-Turkish War of 1828–29, between Russia and the Ottoman Empire. The terms favored Russia which gained access to the mouths of the Danube and new territory on the Black Sea. The Treaty opened the Dardanelles to all commercial vessels, granted autonomy to Serbia, and promised autonomy for Greece. It also allowed Russia to occupy Moldavia and Walachia until the Ottoman Empire had paid a large indemnity; those indemnities were later reduced. The Treaty was signed on 14 September 1829 in Adrianople by Count Alexey Fyodorovich Orlov of Russia and by Abdülkadir Bey of the Ottoman Empire,” according to  the Atlas series by Hans H.A. Hötte (Atlas of Southeast Europe: Geopolitics and History. Volume Three: 1815-1926).

This recent blast in Beirut could mean the end for Lebanon. The country is in a state of chaos and the people are angrier than ever and in the streets in violent skirmishes with Lebanese police and soldiers.

“The tragedy is unbearable,” says Grace Edwards, a medical practitioner in Syria who has cousins living in Beirut, some of whom were injured in last Tuesday’s blast.

“The worst of this disaster is what is happening to the children and their dear moms. Schools were already closing because they had no money when COVID-19 hit the country. Families were unemployed and scrounging for food at foreign-supplied food banks. We gave the poor babies and moms everything we had and people were coming to us for every form of free medical assistance and our clinic was dispensing more free OTC and free chronic meds than we use for injuries in the war of Syria,” said Edwards in a messaging application.

‘Nobody in Beirut trusts the government and that is not without good reason’, notes all sources. It is a corrupt, incompetent and obviously careless government that is self-serving and cares nought for its constituents,

The biggest story lately besides Lebanon’s economic collapse and utter government failure is the recent devastating explosion involving some six million pounds of explosive ammonium nitrate fertilizer. But there are other ticking time bombs in Lebanon. 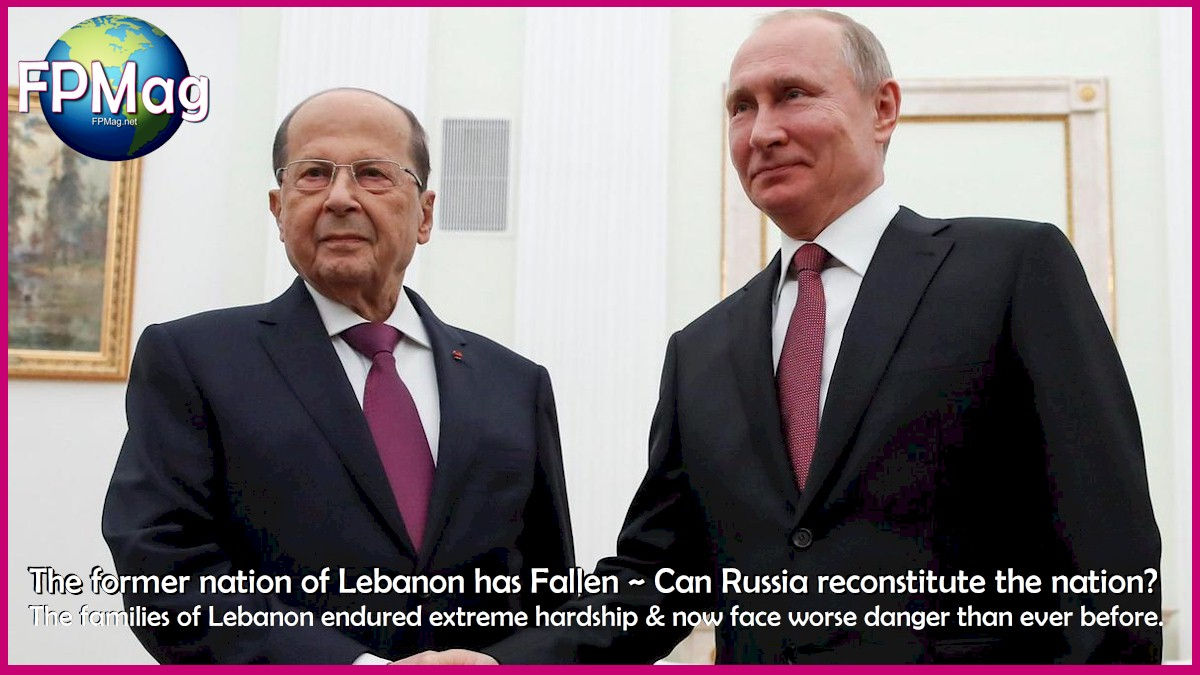 Whatever the Lebanon government creates as an investigation report, it has no credibility whatsoever, confirm dozens of sources who speak in whispers. An unbiased third party investigator would be nearly impossible to find, as most of the world has players in the Lebanese card game. Herein is what FPMag writers and sources know from years in the region, close to the information, about the apocalyptic explosion a week ago in Beirut.

Fertilizer Blast Accident due to incomprehensible carelessness despite warnings from everyone including Russia over a period of seven years.

“This seems to be just one more example of many government failings and it’s total disregard for the safety of children and their families in Lebanon, says FPMag writer Behar Abbasi who is now in Beirut to assess the damage at a clinic she supervises near the city of Beirut.

Despite dozens of warnings, including from Russian experts, “maybe hundreds of letters and memos”, say sources, the Lebanese government did not move the nearly 3000 tons of ammonium nitrate to a remote and safe area.

“This is a statement about the level of incompetence and complete disrespect for the safety of families to whom they are responsible in Lebanon,” says Katie Alsop, a founder and now Middle East Director of The RINJ Foundation, a civil society humanitarian group that specializes in the safety of women and children in troubled nations. 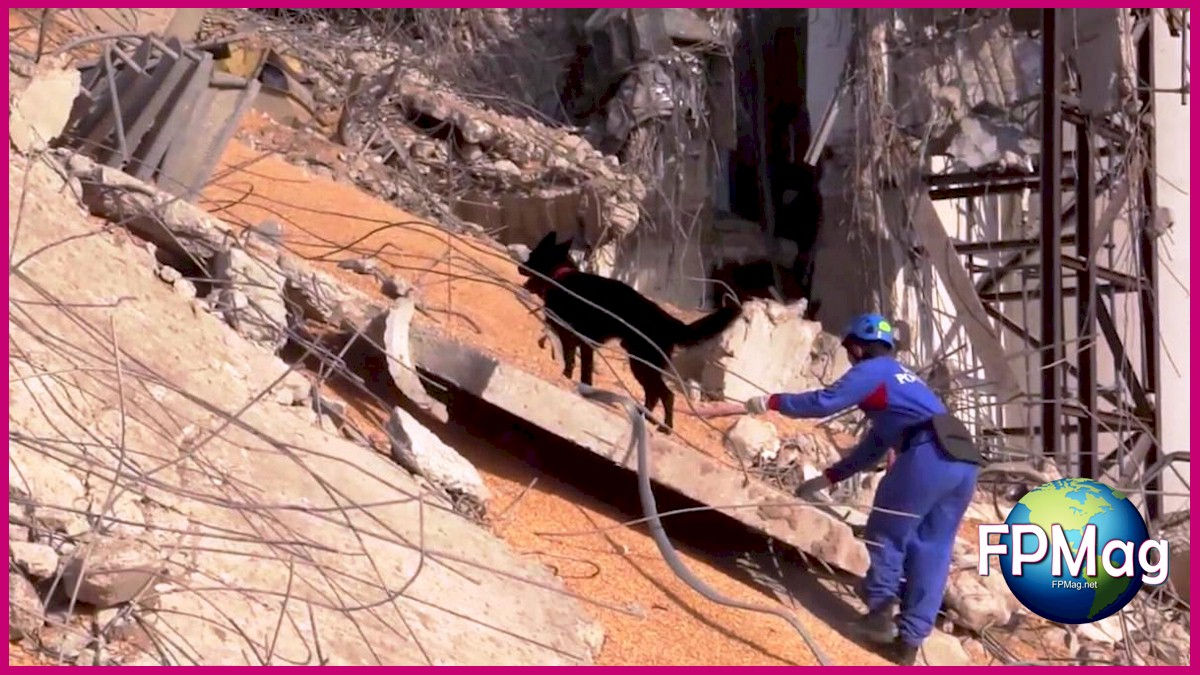 “The Lebanese had confiscated 2,750 metric tons of ammonium nitrate from a Moldovan ship called the MV Rhosus,” explains Baldock.  “That ship owned by a cash-strapped shipping company was transiting Beirut after stopping to pick up a cargo of heavy machinery.”

“The cargo contract failed to complete and the ship-owner could not pay the harbour fees plus the shipper of machinery filed a lawsuit when the carrier refused the shipment because it was overweight, hence the Lebanese authorities seized the vessel. This despite its captain, Boris Prokoshev, telling the authorities about the cargo and pleading with them to allow him to remove the dangerous cargo from Beirut. The Lebanese side of this story may never be known but given the corruption that is epic and renown in this sector, it’s just one more fail of the Lebanese government bureaucracy and leadership which has led the country into a deep black hole of economic collapse.” 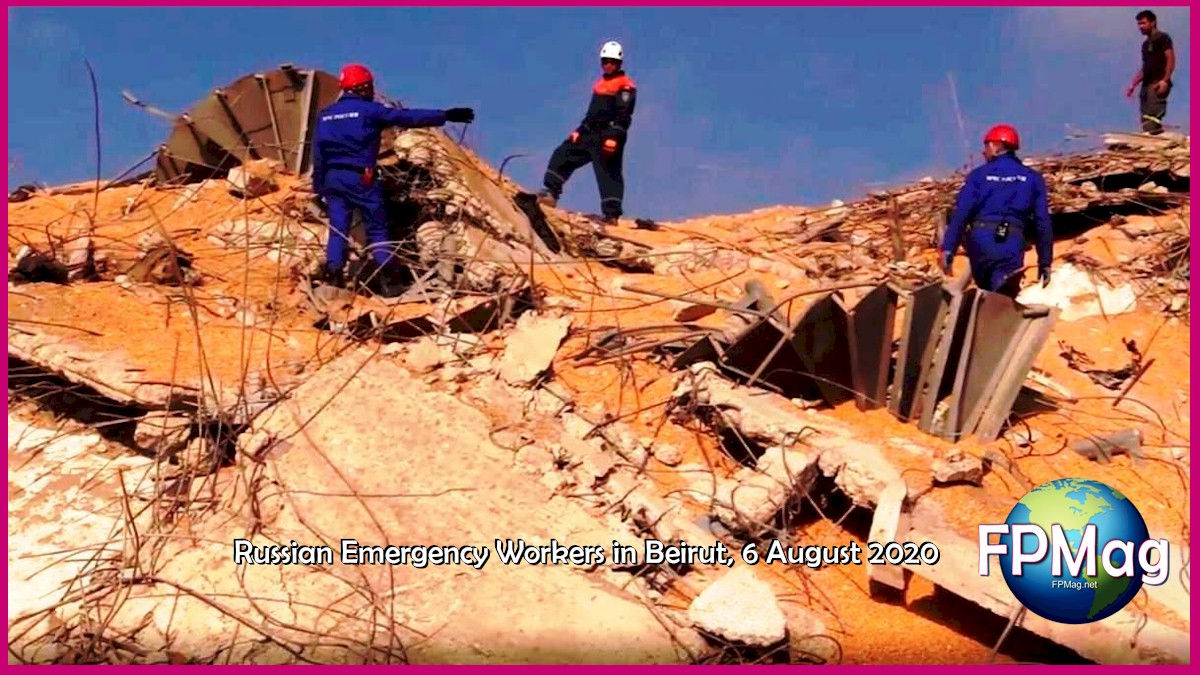 Russian Emergency Situations personnel walk on the site of the explosion in the port of Beirut, Lebanon, on Thursday, 6 August 2020. Russia’s officials say the country sent five planeloads of aid to Beirut after an explosion in the Lebanese capital’s port killed at least 160 people and injured thousands a week ago.
Photo Credit: Russian Emergency Situations Ministry press service, Art/Cropping/Enhancement: Rosa Yamamoto FPMag

It seems to be that this haphazard seized stockpile of dual use chemical (explosives) ignited when a small fireworks facility caught fire and began to exude exploding fireworks. Something flew and ignited the ammonium nitrate. Investigation reports by Lebanese government officials are at best murky.

Notes Alsop, “The list of the deceased included 19 young children who were in the Oklahoma building’s day care center at the time of the explosion in Oklahoma City, so one would think that government officials in Lebanon would have brain power enough to realize, since 20 November 2013 , the inherent dangers in storing 6 million pounds of this hazardous material in the densely populated port city of Beirut.”

This anger is a reflection of the feelings of other women FPMag spoke with.

Gracie Edwards, a doctor currently in Syria but with family in Beirut says that her cousins say “people are walking around the ruins of their homes in a stunned state of mind, picking up precious things and throwing them down realizing there is too much to carry, that the situation is hopeless, like their  lives are over.”

Ms. Alsop refers to the fact that, according to 1995 media archives at history.com, “more than 650 people were injured in the Oklahoma bombing” of 1995, which “damaged or destroyed over 300 buildings in the immediate area” when 2000 pounds of ammonium nitrate exploded.

“Lebanese officials should not have allowed the storage of these materials in the city of Beirut,” says Baldock.

Did somebody start the fire intending to blow up the ammonium nitrate?

“The fire is too distant to be deliberate but might have been independent arson without intent or even knowledge of the stored fertilizer,” says the Israeli security expert. 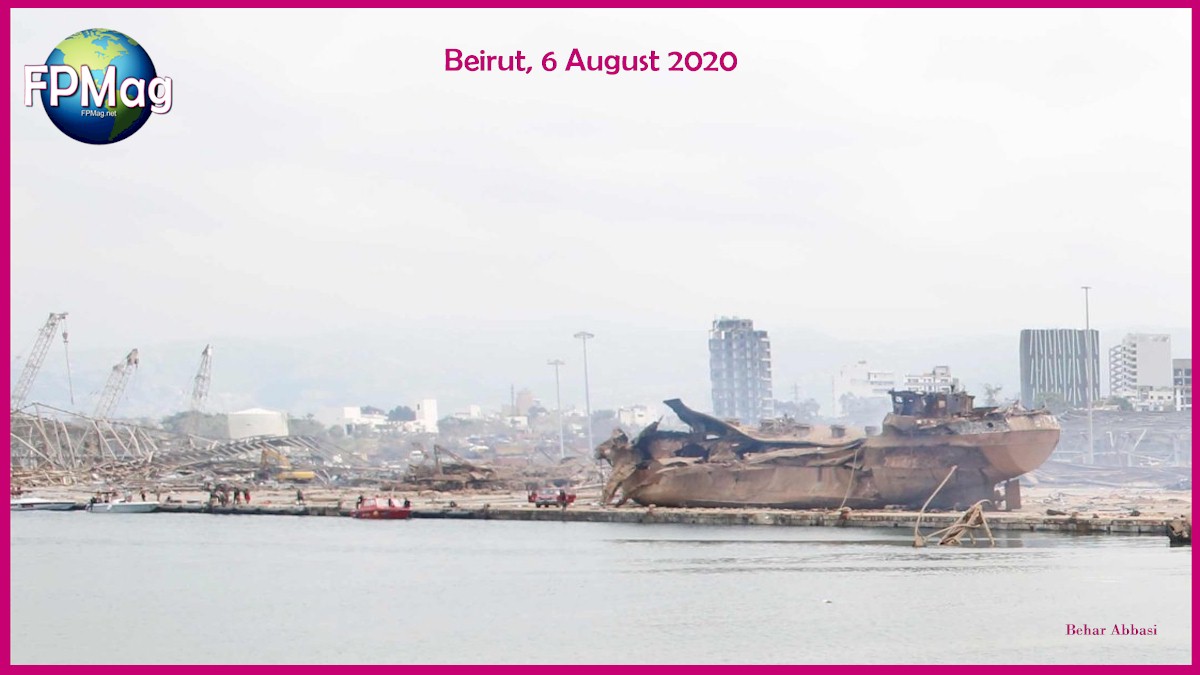 “It’s easy and safe to carry igniters to the fertilizer warehouse site if one wanted to ignite the explosives carelessly stored by the water. These devices are very safe for transport. So there are so many easier ways to set that fertilizer off that the accidental fire in a fireworks factory is plausible. It is actually surprising the fertilizer had escaped detonation over the six years it was stored in such a dangerous manner near residential and business high-density districts,” added the Israeli intelligence expert.

“But I must add,” he said, this happened in Lebanon, a failed state owing to the worst incompetence and corruption anywhere on Earth, hence anything is possible.”

The Skipper of the Vessel that the fertilizer was seized from, blames the Lebanese Government

Lebanon’s Foreign Minister Charbel Wehbe told French radio that his government had given an investigative team until today to come up with some answers. Meanwhile Boris Prokoshev, the former captain of the MV Rhosus that brought the nearly 3,000 tonnes of ammonium nitrate to Beirut, said Lebanese authorities had been warned and he confirmed other sources that estimate hundreds of letters and memos had been circulated to the government as a warning.

“It’s the government of Lebanon that brought about this situation,” Prokoshev told the Associated Press news agency.

Says Baldock, “it matters little who brought this on, it’s the straw that broke the camel’s back. Lebanon is a failed state, Beirut is a destroyed city,  and the turmoil that is erupting is an enormous danger to the region.”

“The struggle that Russia is having with other issues makes this problem a very difficult one to solve but if it isn’t tackled now it will only get worse.”

Talks are underway among nations about what to do next, meanwhile Russia has reportedly sent additional consultants and advisors to work with Lebanese military officials and to support Russia’s personnel in country as the nation explodes in domestic violence.

Russian President Vladimir Putin said that the possibility of sending additional aid to Lebanon amid the recent Beirut blasts will be discussed during a meeting of the Security Council of the Russian Federation, in Moscow, on Friday.

“We all see the tragedy in Lebanon. We know that on my order, the EMERCOM group was formed with the group of Healthcare Ministry attached to it.”

“Our colleagues began their work in the Lebanese capital after the blast in the port. We will think about what other steps we can take to help people in Lebanon,” said Putin.

Moreover, President Putin underlined that the UN Security Council will review the situation “in the world in general,” with special attention given to post-Soviet countries.

Lebanon: Following the deadly blast that hit #Beirut on Tuesday, food prices are expected to skyrocket.@WFP is providing support to the country, which is already reeling from a weakened economy & #COVID19. https://t.co/dWFgdLBdY1 pic.twitter.com/ne6GrfiZH5