Fifteen SARS2-infected Americans between 26 January & 26 February 2020. Could the American catastrophe have been stopped then?  Watch the video, “Fifteen“.

There were more than 15 but Trump didn’t want that revealed because, “it would look bad.” Those cases led to millions of infections by the ferocious SARS-2 virus.

It is estimated a million Americans will have died from this disease by the end of March 2021. 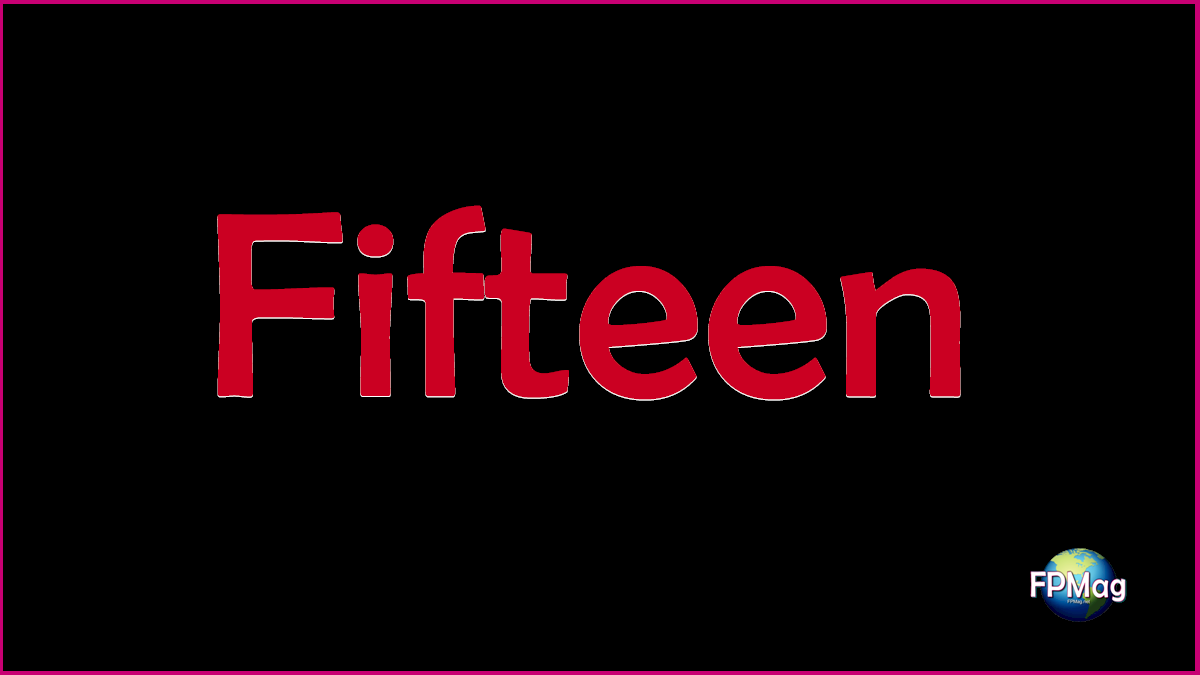 Fifteen. The number of ultra-contagious respiratory disease cases caused by the ferocious SARS2 virus Trump claimed were in the USA by 26 February. But there were more cases he knew about. Medical officials never got the chance to test, trace and isolate. Obfuscation and outright lies set a catastrophe for America in motion. Trump killed America as the world knew it to be. Photo Art/Cropping/Enhancement: Rosa Yamamoto FPMag

Trump & Pence knew of the Fifteen USA COVID-19 cases. As Trump said on another occasion, “it only took one”.

Instead of doing what Europe & Asia did, developing test/treat/trace/isolate protocols using the genomics supplied by China in the week of 5 January 2020, Trump & Pence downplayed all danger from COVID-19 despite the dire warnings of Dr. Tedros of the World Health Organization.

On 10 January, WHO published a comprehensive package of guidance documents for countries, covering topics related to the management of an outbreak of a new disease: 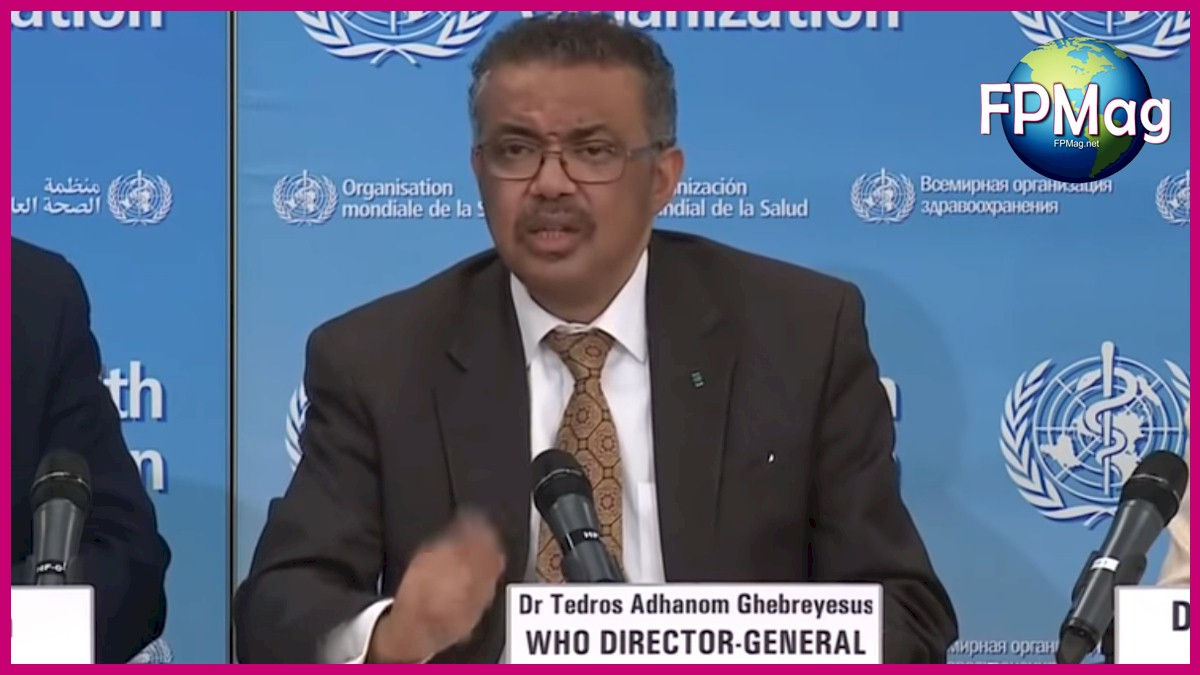 But the world Health Organization already had standardized procedures for the care and management of severe acute respiratory infections. Read if you wish, Interim Guidance Clinical ManagementNovel Coronavirus.

In this 26 February video Donald Trump understates the number of COVID-19 cases as fifteen. But on 17 February 2020, another 14 were flown to California aboard an aircraft with hundreds of healthy passengers from the Diamond Princess Cruise ship at Daikoku Pier in the Japanese port of Yokohama in Japan. Within a few days of arrival another 46 were infected.

Why did Trump not start a deep investigation of contacts of the infected Americans and begin isolation of those potentially infected compatriots? He said it was “because it would look bad” if more cases were found. 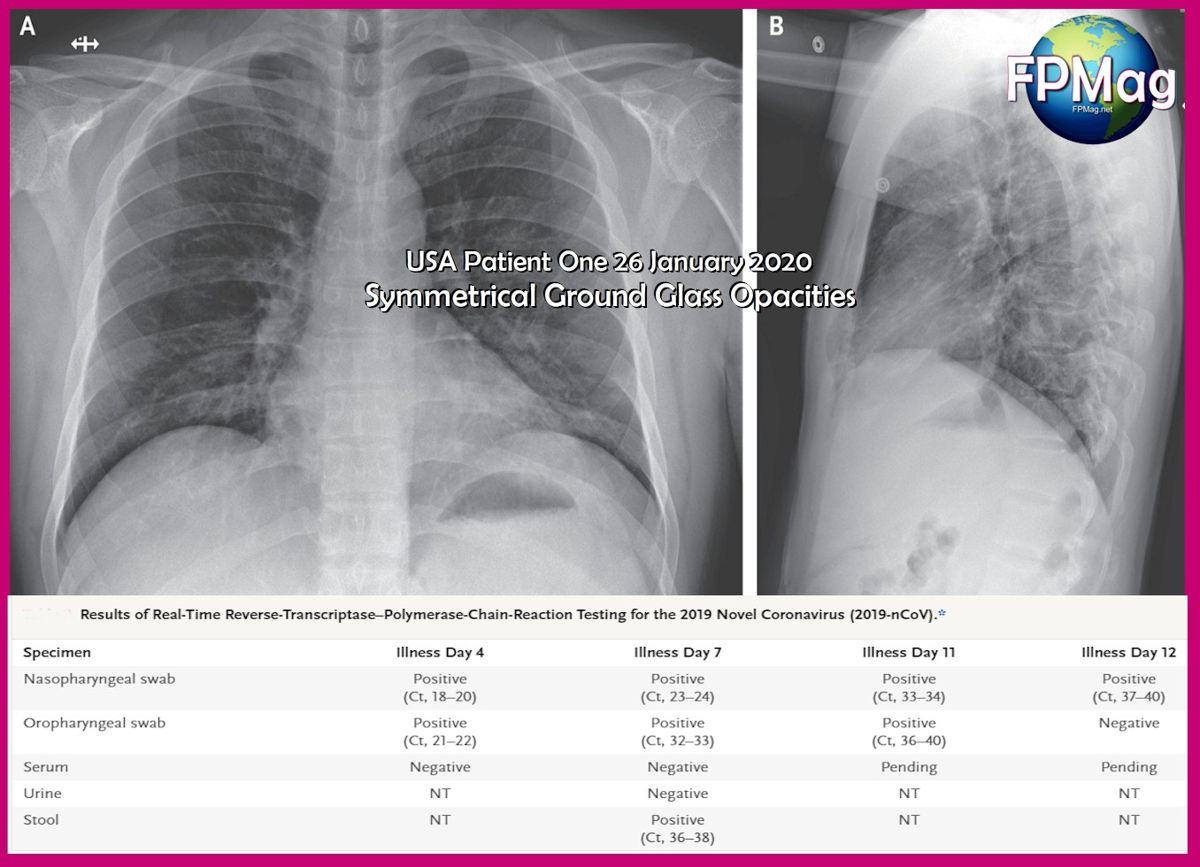 Click to Enlarge and read. Patient One, discovered on 26 January in Washington State.

It took one case to spread to thousands as per the Wuhan experience known to everyone in the world by 26 Feb.

Not just one initially discovered case in America, but fifteen according to Trump. That fifteen led to millions of infections in an unfettered catastrophe in America.

Note: India's reported death sum and cured data are widely seen among epidemiologists and biostatisticians as unreliable. For example, 3,045,620 is CSPAC estimated sum of deaths while India reports 525,116, creating the largest discepency in the world. India might only report hospital tested cases. Sources among hundreds of nurses and other medical practitioners provide a picture that in summary concludes most cases never present in a hospital especially in northern provinces where health care is less available and utilization is low anyway because of poverty, hence most people die at home in India. This theory could explain discrepancies between reported data and algorithmic estimates.

In order to avoid letting countries that refuse to report the sum of case recoveries, thus skewing global calculations, Burundi, Belarus, Belgium, Bosnia and Herzegovina, Britain, most provinces of Canada, Ecuador, FaeroeIslands, Falklands, Finland, France, French Polynesia, Hong Kong, Iceland, Mongolia, Laos, Netherlands, Norway, Peru, Portugal, Puerto Rico, Ukraine, South Korea, Tunisia, Sierra Leone, Sudan, Spain and Sweden 'recoveries' are estimated based on the current reported global recoveries as a percentage of all cases. (([reported recoveries]) divide (551,481,502 [Global Reported Sum of All Cases] less 30,029,819 [France Sum of Cases] less 909,882 [Ecuador Sum of Cases] less 12,734,038 [Spain Sum of Cases] less 8,177,667 [Netherlands Sum of Cases] less 2,519,199 [Sweden Sum of Cases] less 3,620,801 [Peru Sum of Cases])) = 96% a coefficient which is then adjusted according to the number of cases in the past 30 days and the new coefficient is applied to the sum of each of these nation's cumulative cases to estimate the missing recoveries data. In the case of France some additional hospital-sourced recovery data is factored.

The United States still does not know how many COVID-19 cases there were on 26 February 2020. Trump said it was fifteen, but it was far more than that.

The Trump administration has swept the real data under the rug in a blur of obfuscations and outright lies, denying medical officials an opportunity to do their jobs and to isolate cases and their contacts from the start of the outbreak.

Under the US Criminal Code, this is a crime of negligence causing deaths.

Donald Trump says he knew it only took one case to cause a disastrous epidemic. He jokes about “one from China”.

“WHO also issued its first Disease Outbreak News report. This is a public, web-based platform for the publication of technical information addressed to the scientific and public health communities, as well as global media. The report contained information about the number of cases and their clinical status; details about the Wuhan national authority’s response measures; and WHO’s risk assessment and advice on public health measures. It advised that “WHO’s recommendations on public health measures and surveillance of influenza and severe acute respiratory infections still apply”.

Trump said he had fifteen cases on February 26.

But we know 14 had come back from The Diamond Princess cruise ship in the early part of the year docked at Daikoku Pier in the Japanese port of Yokohama. It was also determined that because of the comingling of infected persons with healthy patients, in the flight to America from Yokohama another 46 cases emerged in February. 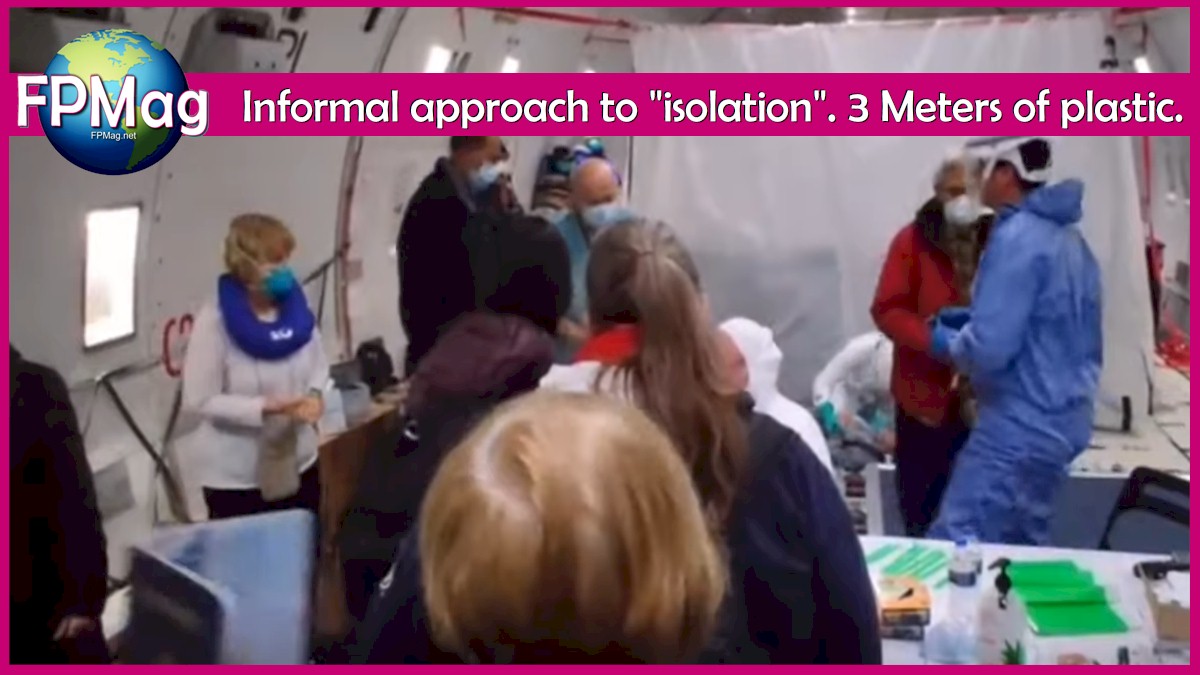 According to Fred Harris, a biostatistician tracking the COVID-19 pandemic, “the US State department flew non-infected passengers from the Diamond Princess often comingled with fourteen COVID-19 patients who were behind a plastic sheet divider in a recycled-air cabin of a cargo B-747 once airborne.

The outcome has been at least 46 COVID-19 confirmed infected passengers, FPMag has learned from reliable sources inside the CDC and within other US medical institutions. All records of the initial 14 COVID-19-Positive Patients co-mingled and infecting 43 healthy passengers have vanished. FPMag continues to report those cases having been told by witnesses who advocated the CDC position present at the material time that a crime of at least reckless endangerment was being committed by the US State Department Officials and would wait until the pandemic ended.

“Donald Trump was “rescuing” Americans from the Diamond Princess, a floating pandemic incubator.”

“The cruise liner’s circumstances including commingling of non-infected with COVID-19 infected persons, have been also experienced in Wuhan, China; South Korea; and in Italy. Those four experiences have indicated that close confinement of the public with COVID-19 infected patients is a guaranteed outbreak of catastrophic proportions,” says nurse Michele Francis in a WhatsApp interview from Venezuela to Hong Kong.

“Of these special infectious circumstances, it is statistically possible that the outcome will be immediate infection of most persons in the same space. Eventually there will be two mortally ill patients out of every ten serious infections,” she added after consulting with peers in Shenzhen, southeastern China who then consulted with health care workers in Wuhan; and then in South Korea.

“CDC did weigh in on this and explicitly recommended against it,” principal deputy director, Anne Schuchat reportedly wrote on behalf of CDC officials.

(Excerpted from a previous report.)

“We should not be mentioned as having been consulted as it begs the question of what was our advice.” She wrote that the infected passengers could pose “an increased risk to the other passengers.”

“…close confinement of the public commingled with COVID-19 infected patients is a guaranteed outbreak of catastrophic proportions… ” say experts.

You can watch the video report by extraordinary citizen reporter Cheryl Molesky who was aboard the flight.
Something happened when the US Centers for Disease Control (CDC) was faced with a dilemma. Japanese authorities reported to CDC that fourteen passengers tested positive for the colloquially dubbed SARS-CoV-2 (COVID-19) among those persons the US had already removed from the Diamond Princess cruise liner in Yokohama, Japan and boarded onto buses or were in the process of boarding on buses. From Centers for Disease Control Sidelined…

Charging documents drafted against these two powerful White Supremacists, Pence and Trump, theorize Trump inevitably crafted an election strategy to kill off Black American Democrats by not stopping the Novel Coronavirus in the partly correct belief COVID-19 killed the poor & Black “Democrats” who would never be Trump supporters.

An angry but just world will probably show mercy and let them live in a prison somewhere till the end of their natural lives. 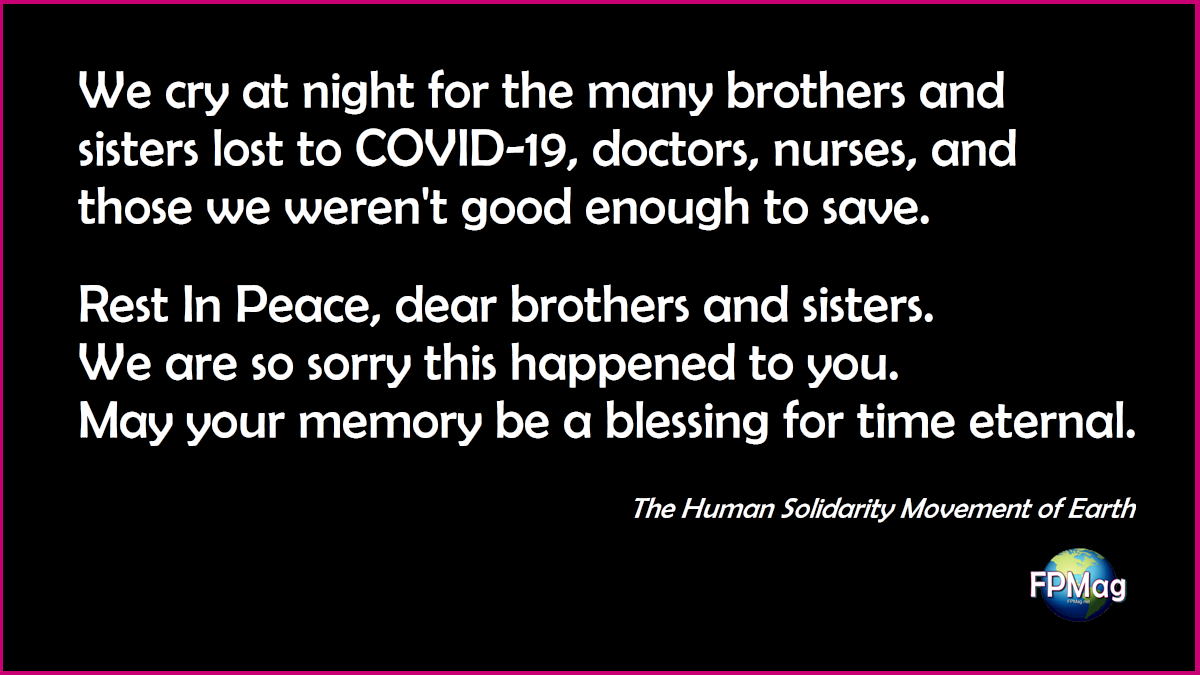