This is why I cry.

Donald Trump doesn’t feel Jordan’s three babies’ agony, overwhelming fear and despair that they have not seen their mom in three days. He doesn’t get how they miss their gentle daddy who normally comforted them when mom was busy, reassuring babies she was close by.

What in Hades has infected America? by Melissa Hemingway

The case of Jordan and Andre Anchondo, school-supplies Walmart shoppers near the Cielo Vista Mall in El Paso should suffice for staff and family of the sick dog in the White House to take action.

Why did they not already walk into the Oval Office, grab the man and haul him off to an asylum and commit him indefinitely as non compos mentis? 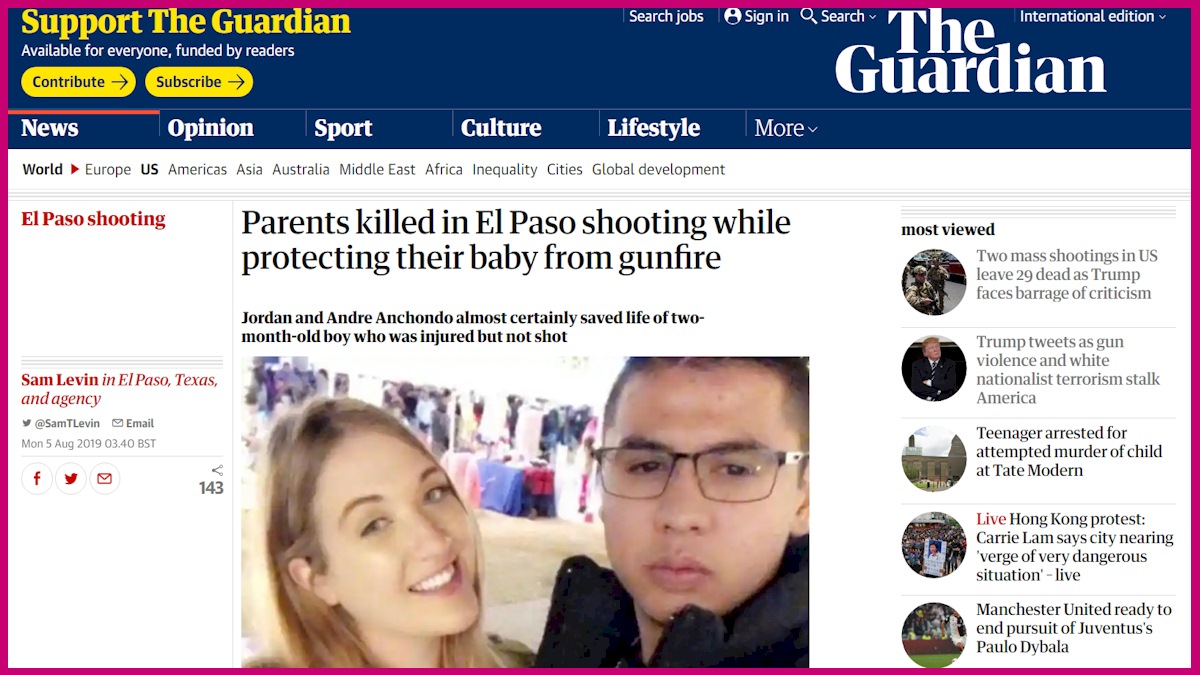 Motivational speaking to killers makes their murder yours, Mr. Trump.

For three years Donald Trump has pumped up the American volume and brought virtue to racial hatred and bloodiness.

Winning elections at the cost of constituent families is still murder.

Bloody racial resentments stoked by a rabid-minded sociopath are needed by the Donald John Trump electioneering puppeteers to keep their power. They believe this will bring the American white-right Electoral College votes to the ballot box in the 2020 election and thus retain their power.

They do this willfully at a cost paid in American lives and global heartache.

Proof of America’s valence for bloody racism could be in the decades-long history of black shootings but racially motivated mass murder has been exacerbated.

The murder of Trayvon Martin and many other black children is welcomed by a certain type of white-supremacist in the United States.

The killer in this case targeted “Hispanics invading Texas” he told an 8chan audience.

The killer was on a killing spree because Donald Trump sent him.

The article " This is why I cry. " was written by Author: Katie Alsop (Biography, Email) Staff Writer Feminine Perspective. FPMag correspondent for the Middle East and Europe.
Contact Katie Alsop on Twitter ~ Facebook ~ Find on YouTube