Philippines better off on good side of China.

A little past 11pm Beijing time, Philippines President Rodrigo Duterte arrived, last night, in Beijing, for talks with the President of the People’s Republic of China, Xi Jinping.

Filipinos are looking for good things to come from a series of many meetings across four days. China is a neighbour and not a very good one, lately. China brought terrible gambling and crime to Manila today and every day for months now. That is hard to overlook for families. Chinese are not allowed to do that in their own country and they should not do this to Filipinos.

Only the already-rich dynasties of Manila will benefit. Poor, vulnerable Filipinos will lose their everything on false hopes of fortune. 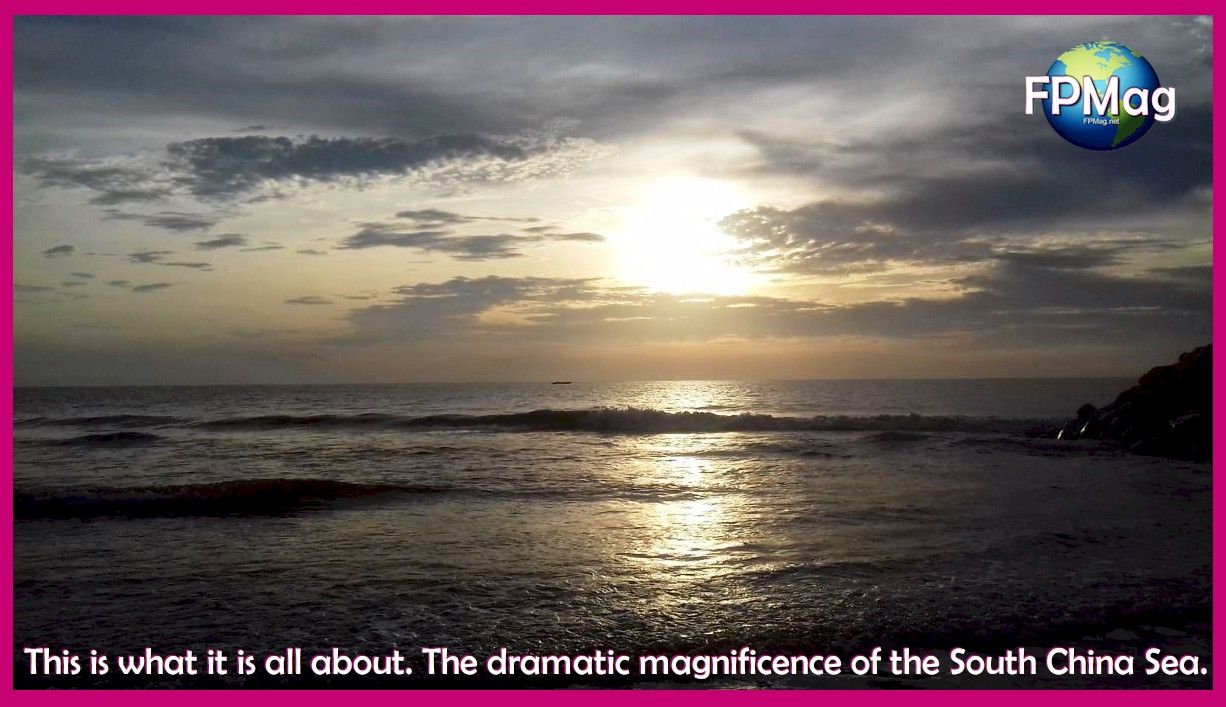 This is what it is all about. The dramatic magnificence of the South China Sea.
Photo Credit: Micheal John – Photo Art/Cropping: Rosa Yamamoto FPMag

President Duterte is accompanied by: 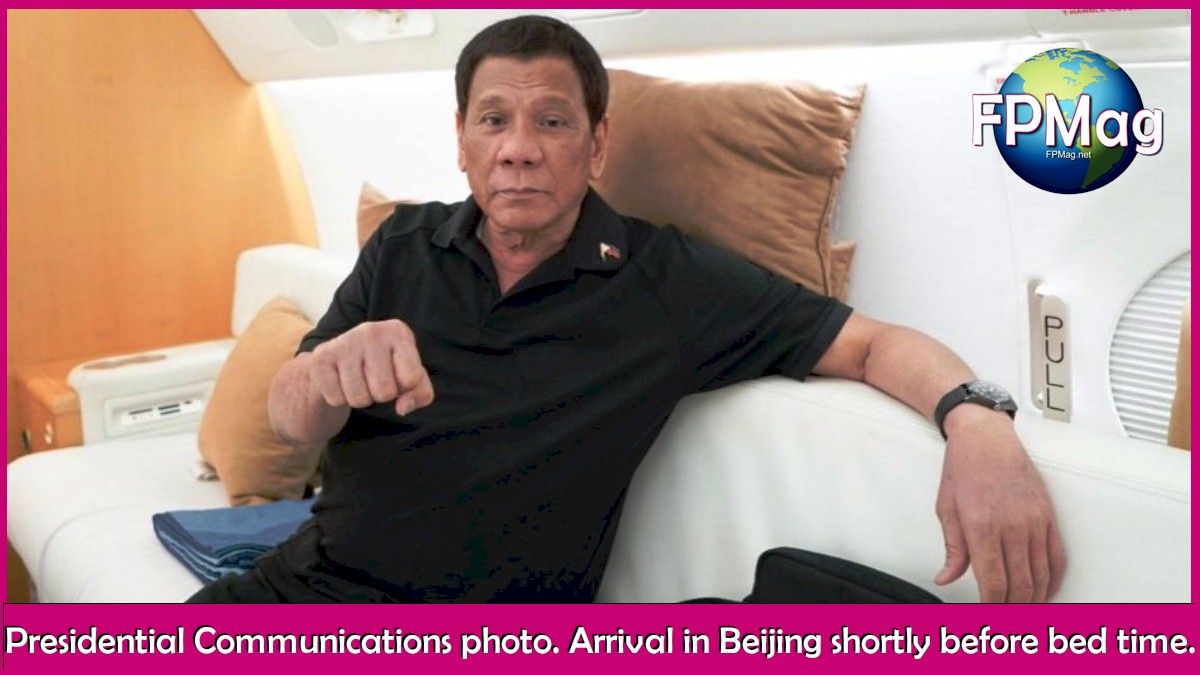 A tired President Duterte arrives in Beijing close to midnight Wednesday (GMT+8). In a few hours he will start a busy day with bilateral talks at many levels with China’s officials.

President Duterte’s arrival followed a day in which Agence France-Presse reported that “China has refused another planned port call by a US warship amid soaring tensions between the Pacific powers on trade.”

This comes from US assistant secretary of defense in charge of Asia,  Randall Schriver, who said, “We did recently receive word that it was inconvenient for them [China] to host a previously planned port call to Qingdao, China.”

Also in August, China denied requests for two US Navy ships to dock in Hong Kong.

Trump’s trade war has rocked the globe. Asia is no exception. Uncertainty is causing havoc.  It also has led to strong emotions.

Charming, simple Filipinos have their views on all this.

In Baguio City, Republic of the Philippines, during coffee this morning, one man, a taxi driver said, “Duterte is going to give away the Philippines to China, selling out the country.”

Another man, a doctor, said while munching on his toast and swilling black coffee, “When that fishing boat was hit by a Chinese militia boat, who came to the rescue? Vietnamese fishermen, right. Why were they so close?”

He answered his own question.

“That’s because that area of the Spratlys is claimed by many countries, not just China. And that is why Filipinos, Thais, Vietnamese and Chinese were all fishing there that day. They all claim that region as theirs. Not just China.”

“So what  you claim to think Duterte is giving away isn’t even his to give because everyone else in the region claims it too”.

And common sense grabbed the moment. The evidence spoke for the facts. Many fishermen were around that day, but of this being an onerous act by Chinese militia, there seems to be no doubt. Filipinos are furious about that, with good cause.

Duterte has made a point of saying that he would rather have China as a friend not an enemy.

A security guard who was coming off shift and having his breakfast in the day-start breakfast clutch, chimed in saying, “China is our neighbour. They better give us something good in exchange for our friendliness and sharing our territory because that is what neighbours do when you help them,” he slammed down passionately.

“All we got from the Americans was babies from the girls they raped,” the taxi driver added. The look in his eye suggested the elderly man maybe had family impacted. I did not want to ask. That may be another article.

(In 1990, Baguio City expelled the Americans from a military base near the city. The American servicemen earned a reputation for raping the women and children, and that unseemly conduct lives on to this day in people’s memories.)

“China is our neighbour. They better give us something good in exchange for our friendliness and sharing our territory because that is what neighbours do when you help them,” is the wisdom of a seasoned taxi driver in Baguio City.

The breakfast clutch agreed. They are all behind their President in that thought. “China better give us something good in exchange for our friendliness.”

It’s a simple notion of people who live simple, charming lives. Sitting on a sandy shore watching fishermen come and go in their pontoon fishing boats seems like a throwback more than a thousand years. The bible talks about such men and their fishing boats.

Their lives and their work must be respected with all our hearts because they feed our hungry families.

The official itinerary set out by Malacanang Palace prior to President Duterte’s Visit to China.

Part of the President’s itinerary in Beijing will be the bilateral meeting with President Xi, focusing on the accomplishments and shared goals of the Philippines and China under their Comprehensive Strategic Cooperation.

The President is looking forward to exchanging views with President Xi on how to accelerate the pace of cooperation between the two countries in terms of concrete projects, as well as on issues of mutual interests.

President Duterte has made pronouncements recently that he would raise the United Nations Arbitral Tribunal’s ruling favoring the Philippines when he meets the Chinese leader in Beijing. The President said he favors joint exploration with China in the contested territory.

The two leaders will also witness the signing of a number of cooperative bilateral documents and memorandum of understanding (MOU) aimed at increasing the breadth and depth of Philippine-China cooperation. The agreements include those in education, science and technology, and economic and social development, according to Montealegre.

The President will also attend a business forum arranged by the Department of Trade and Industry (DTI) while in Beijing.

After his engagements at China’s capital, the Chief Executive will then travel to Guangzhou to join the Filipino nation in supporting Gilas Pilipinas as it competes at the 2019 FIBA World Cup. He will personally cheer for Gilas Pilipinas in its scheduled game against Italy on August 31.

While in Guangdong, President Duterte will receive a courtesy call from Chinese Vice President Wang Qishan. They are expected to discuss ways to strengthen cooperation, increase trade and investment, and deepen the friendship between the people of Guangdong and the Philippines.

The members of the government’s economic and security clusters will join President Duterte during his trip to China.