It doesn’t take much to change Earth’s Climate

Massive volumes of data accumulated from scientists and researchers in a wide range of science disciplines, doing research for literally centuries, has told humankind a lot about what has happened before and during human existence.

They conclude little changes in Earth’s orbit over thousands of years, change the Sun’s impact on Earth. That caused advancing and retreating of polar ice and even an Ice Age.

Like DNS has provided microscopic evidence of miniscule differences that change the human condition, radiological and other data and their metrics have been instructive in evaluating the history of Earth and its changes. 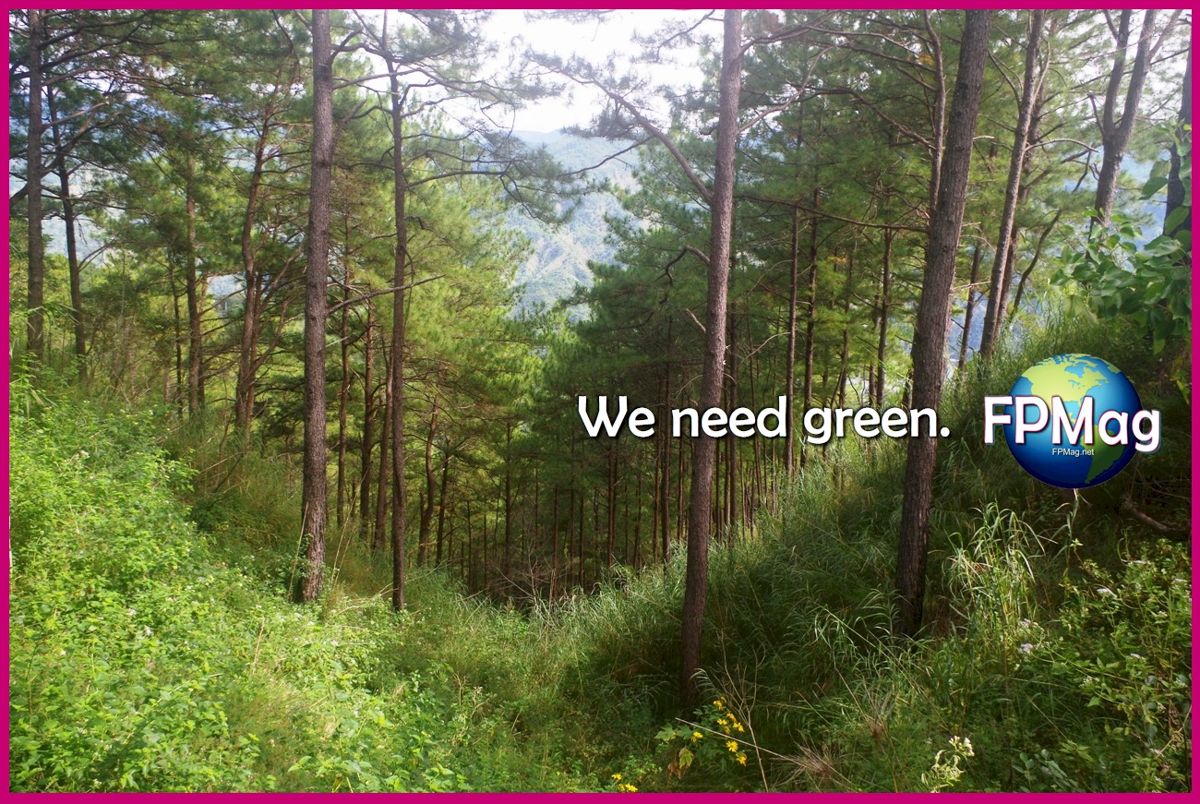 If mankind knew all along that burning fossil fuels was killing the planet, why didn’t mankind do something about this? Why not now?

The answer lies within the patriarch. Look to the billionaires and see the money. See the greed. There’s little interest there in populations getting free energy from the Sun, or from the wind. Free energy for 7.6 billion humans would be contraindicated for the billionaires who make their money from human consumption of fossil fuels. This oil money has been driving everything for far too long.

Homo erectus beings began using fire some 400,000 years ago. Circa 3,500 B.C., the wheel was invented. Soon fire would be used to make explosive amounts of gases in a confined space  (gaseous water a.k.a steam or combustion gasses) to force wheels to turn. Thousands of years later mankind is still using fire to burn fossil fuels to turn a wheel or wheels. The big change: more wheels. Even nuclear energy is simplistically used to boil water, make steam, and turn a bigger wheel.

The patriarch’s greed for money and power has obviated clean energy solutions.

It’s time to throw the oligarchs out of office in order to save our children’s children.

If the corporate world’s patriarch was not in control of the world’s people by using their oil money to buy power, things might have been different. Actually, they need to change because the greedy Neo-Cons have come close to destroying the Earth. That’s why Corporate America and the global Neo-Cons are zealously opposed to anyone who mutters anything about CLIMATE CHANGE. They are not idiots, they are just consumingly greedy.

Sustainable energy sources must replace fossil fuel. Then America and Britain can stop killing the people of the Middle East over oil and our babies of today will have a home tomorrow for their children and grandchildren.

NASA says that the planet’s average surface temperature has risen about 1.62 degrees Fahrenheit (0.9 degrees Celsius) since the late 19th century, a change driven largely by increased carbon dioxide and other human-made emissions into the atmosphere.

Most of the warming occurred in the past 35 years, with the five warmest years on record taking place since 2010. Not only was 2016 the warmest year on record, but eight of the 12 months that make up the year — from January through September, with the exception of June — were the warmest on record for those respective months.

The American National Oceanic and Atmospheric Administration (NOAA) has four days ago declared July 2019 as the hottest year on record. Those records go back to 1880.

Interestingly, June would have tipped the scales if July had not. 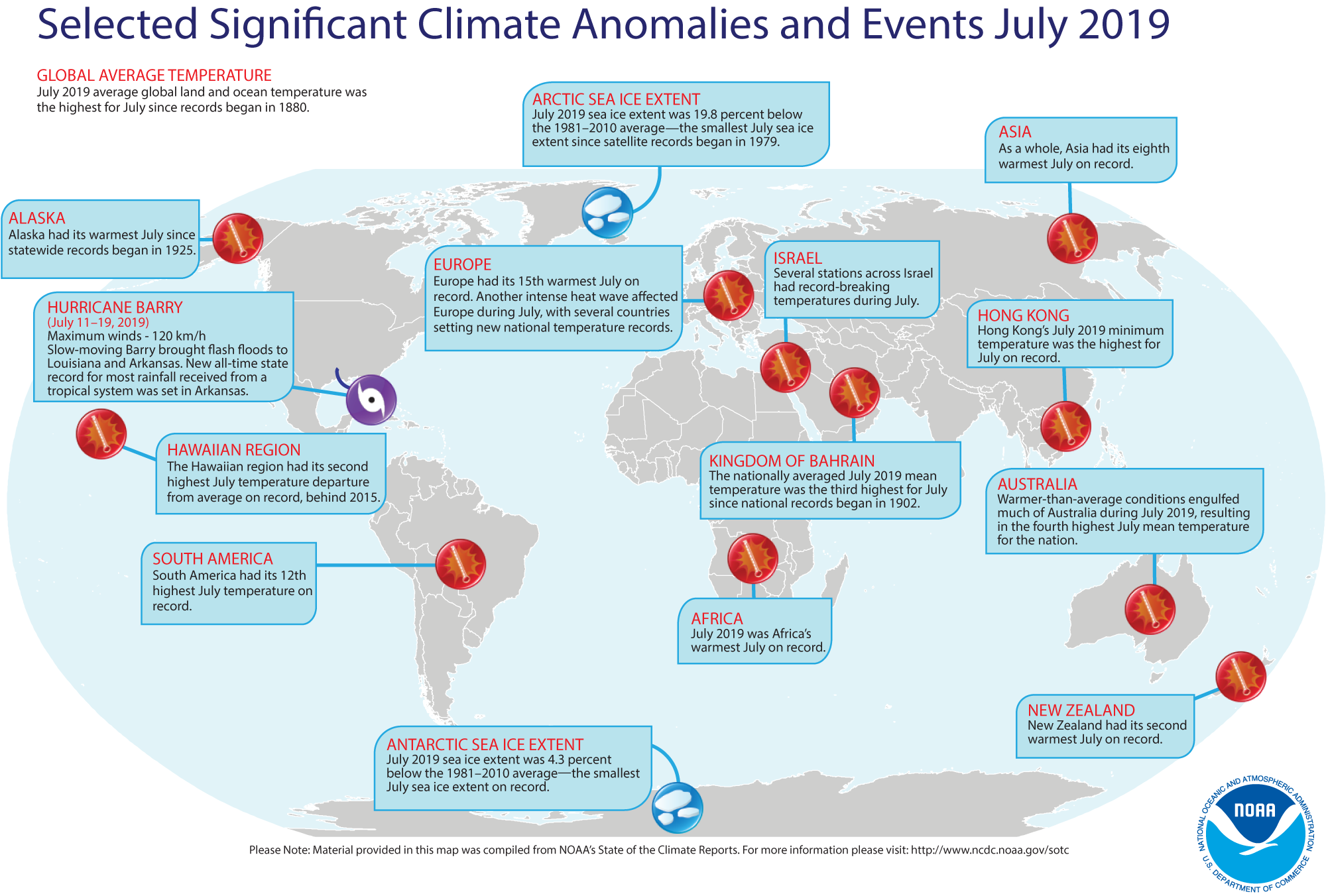 Click to enlarge. NOAA National Centers for Environmental Information, is part of the suite of climate services NOAA provides to government, business, academia, and the public to support informed decision-making”

This monthly summary, developed by scientists at NOAA National Centers for Environmental Information, is part of the suite of climate services NOAA provides to government, business, academia, and the public to support informed decision-making.

Mankind interrupted the global carbon cycle by digging up old organics (fossil fuels), burning them in the gazillions of tons.

The Sun is life-giving. The Sun can also be a killer.

The single thing having primary importance to Earth’s health is the Sun. Heat and light are the components Earth needs to avoid becoming a barren, icy collection of rocks. But when that heat is not radiated by Earth and remains encapsulated in a shroud of greenhouse carbonous gasses, it’s a different story.

The sun made Earth a clean green. Mankind burnt too much fossil fuel and soaked everything in black which now  interferes with the Sun’s positive impact on Earth.

Farmers know that the number of days of active sunshine in a year make a difference to crops. The quality of sunlight is also very important.

Swimmers know that water can become unbearably cold without sunshine. They also know that sunshine changes currents and stirs the air and the water. 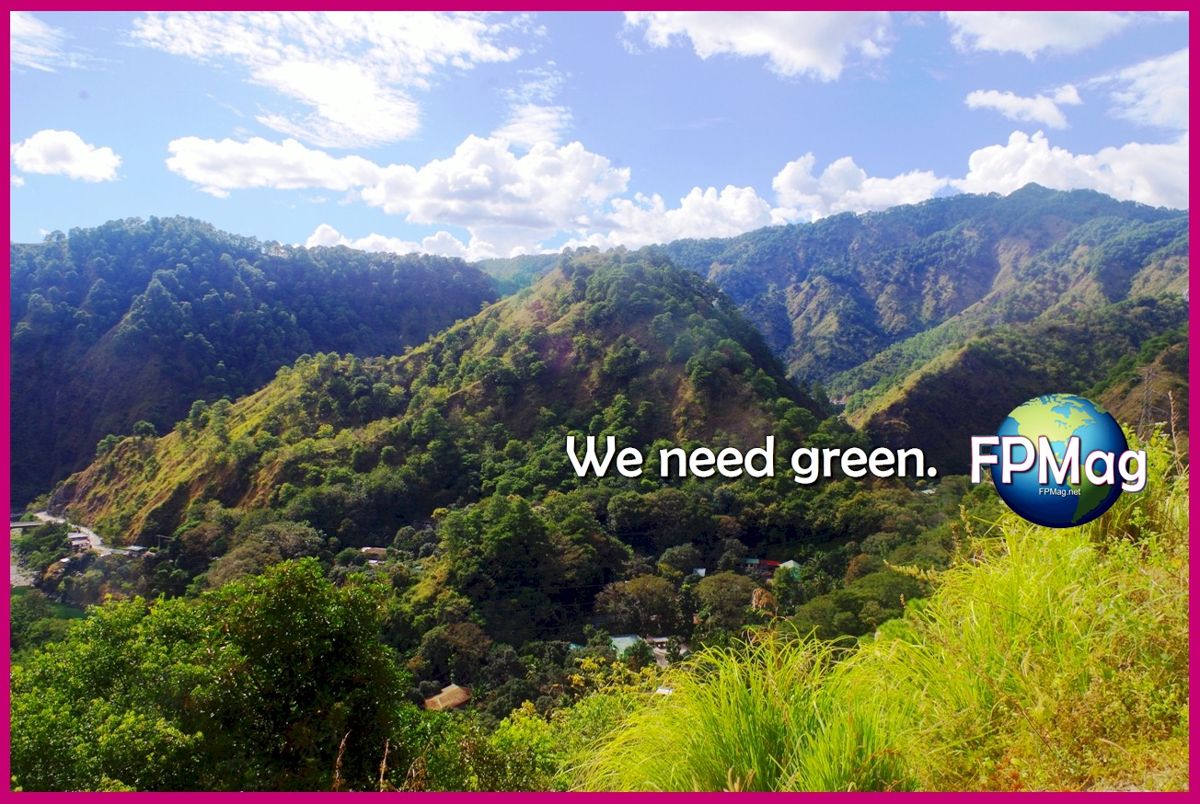 Photosynthetic cells use carbon dioxide and energy from the Sun to make sugar (glucose) molecules and oxygen. When we breathe, our cells use oxygen and glucose to synthesize energy-rich carrier molecules, such as carbon dioxide which is produced as a waste product.

There is the global carbon cycle.  The synthesis of glucose and then breakdown by cells are opposing processes. The cycle is about creating then breaking of carbon-based material, from carbon dioxide to complex organic molecules (photosynthesis), then back to carbon dioxide when we breathe.

Photosynthesis is a creational part of the global carbon cycle.

According to NASA,  “in the 1860s, physicist John Tyndall recognized the Earth’s natural greenhouse effect and suggested that slight changes in the atmospheric composition could bring about climatic variations. In 1896, a seminal paper by Swedish scientist Svante Arrhenius first predicted that changes in the levels of carbon dioxide in the atmosphere could substantially alter the surface temperature through the greenhouse effect”. 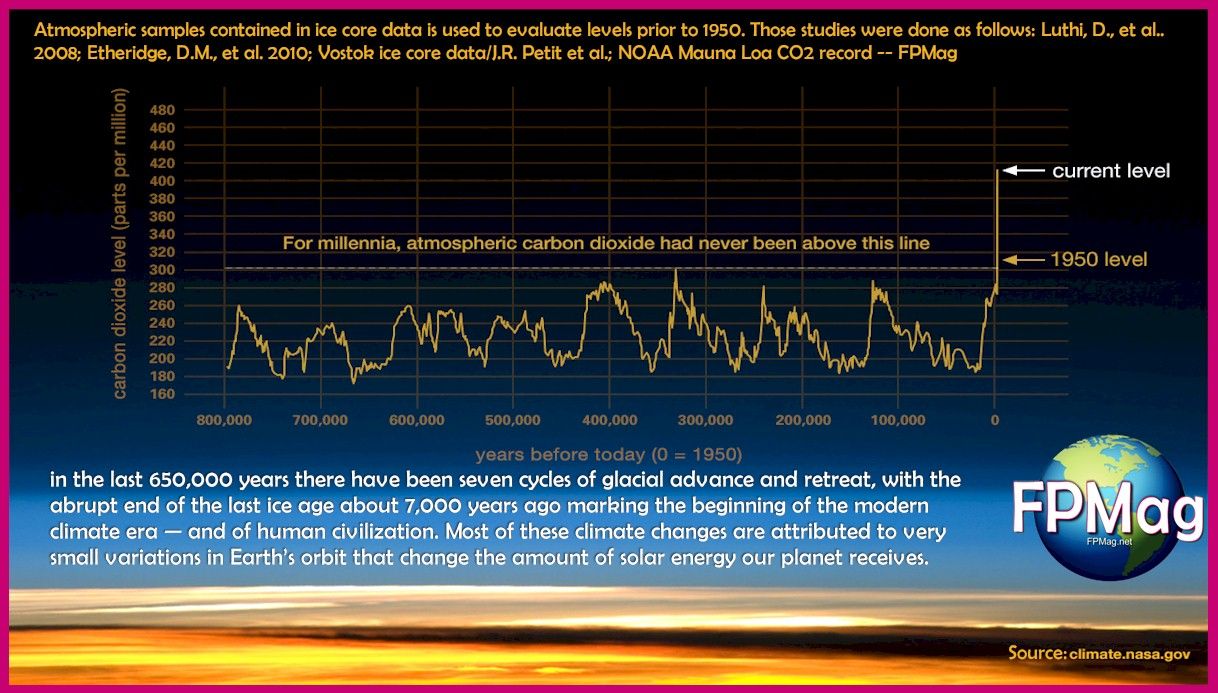 Get the NASA Earth Now App

It’s free, it’s dazzling and it puts Earth in the palm of your hands. NASA’s “Earth Now” app displays real-time global satellite data of your planet’s vital signs. Great for students, teachers and anyone interested in Earth science, this 3D app can be your go-to source for carbon dioxide conditions, gravity anomalies, ozone levels over Antarctica and more. Download it to your Apple or Android device to keep your eye on the Earth.