‘If I mattered.’ (What ordinary women might say to G7 Summit)

Things to talk about at the G7 Summit

FPMag assembled a group of women from many walks of life to talk about what should be said and done to influence the men at the The Biarritz Summit (G7 Summit) starting today and running through Monday in Biarritz, France. This FPMag report will refer to this source as “focus group”.

The women of the focus group speak on condition of personal anonymity from Venezuela, Canada, Syria, France, China, Ghana, Hong Kong and the Philippines.

None thought their views matter to anyone. FPMag had to explain to some of these sources to this report what the G7 Group is all about and that one of the group of leaders is a woman and another is a feminist. Other members, the group was quick to advance, act like rabid misogynists. Some disagreed that Trudeau is a feminist.
“Some of these men outwardly and bitterly hate women,” noted three.

Making up the G7 are Britain, Canada, France, Germany, Italy, Japan and the United States plus the European Union. (“Yay,” said the focus group to EU.)

“Here are the leaders, if I mattered,  who should listen to women,” advances the focus group.

(Note: Pink marks “the feminists who may be our voice”, according to the focus group.)

The focus group‘s message to the G7 in a paragraph: “Please realize that while the men in the global patriarch are running the world quickly toward war, most women and children stay home and worry. Most of the strife that happens to the feminine population is not of their making nor their choosing. Seek peace through a kinder approach to one another.” Oh, and  “Join voices for peace,” the women said.

Great women who earned authoritative roles are barely heard. Gender equality is still a dream. But while gender equality is just a dream, so too are the rights of nearly half the world’s people. Many of those women and their families have been holding hands across Hong Kong to say totalitarian rule is not an option for them. 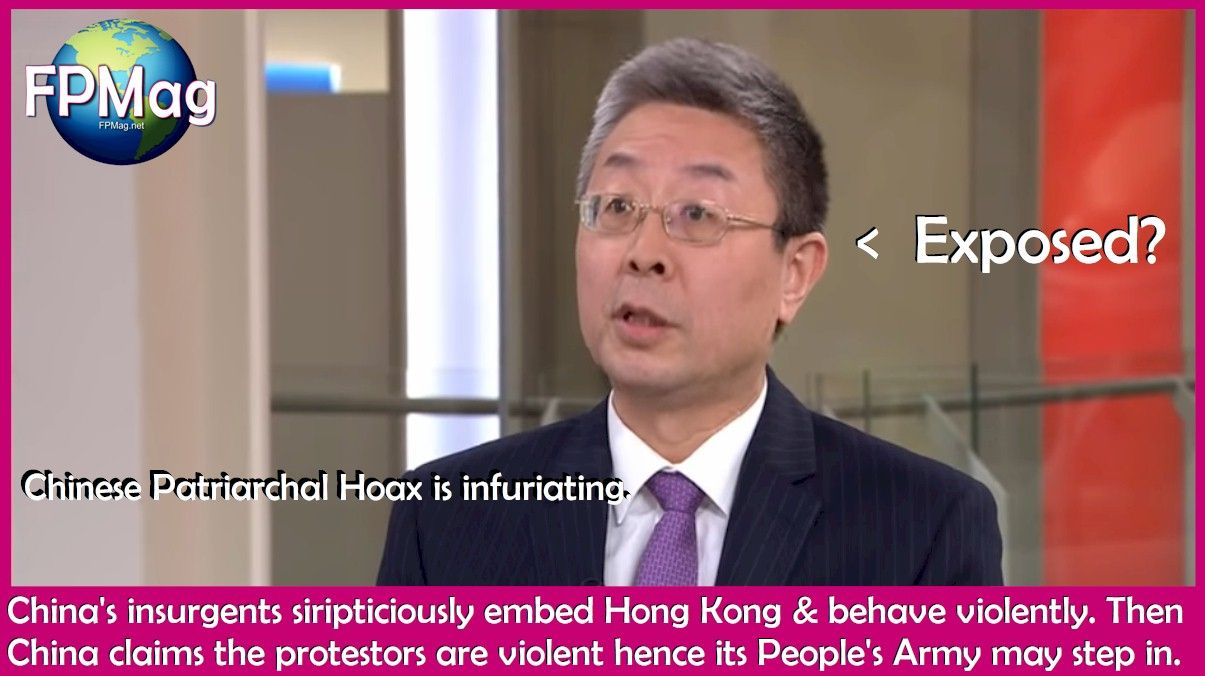 Two women in the focus group fought back tears of frustration talking about the “games China is playing:” against the people of Hong Kong.
Photo Credit: Sky News Video Capture. See the full video in this article.
Photo Art: Rosa Yamamoto FPMag 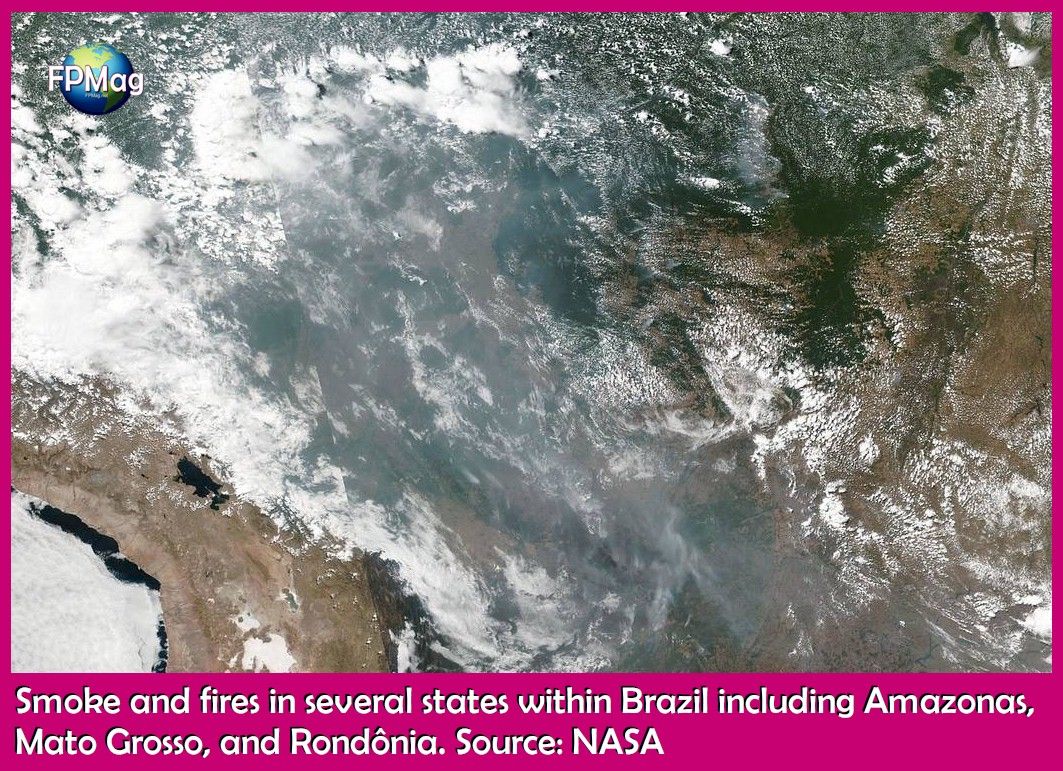 NOAA/NASA’s Suomi NPP satellite collected this natural-color image using the VIIRS (Visible Infrared Imaging Radiometer Suite) instrument on August 21, 2019. Smoke from the fires raging in in the Amazon basin has created a shroud that is clearly visible across much of the center of South America.

This week’s headlines worry the women of the focus group.

The all-women focus group asks the leaders of the G7 plus Europe to stay focussed on the challenges and avoid personal conflicts between the men.

Focus group member, Mirella, asked and we found it: The Brooklyn Dad.

1. You had no idea of the existence of this act, until AFTER you put your foot in your mouth.

2. You didn’t even know the difference between HIV & HPV

3. You can’t declare an emergency over something YOU STARTED, dipshit. 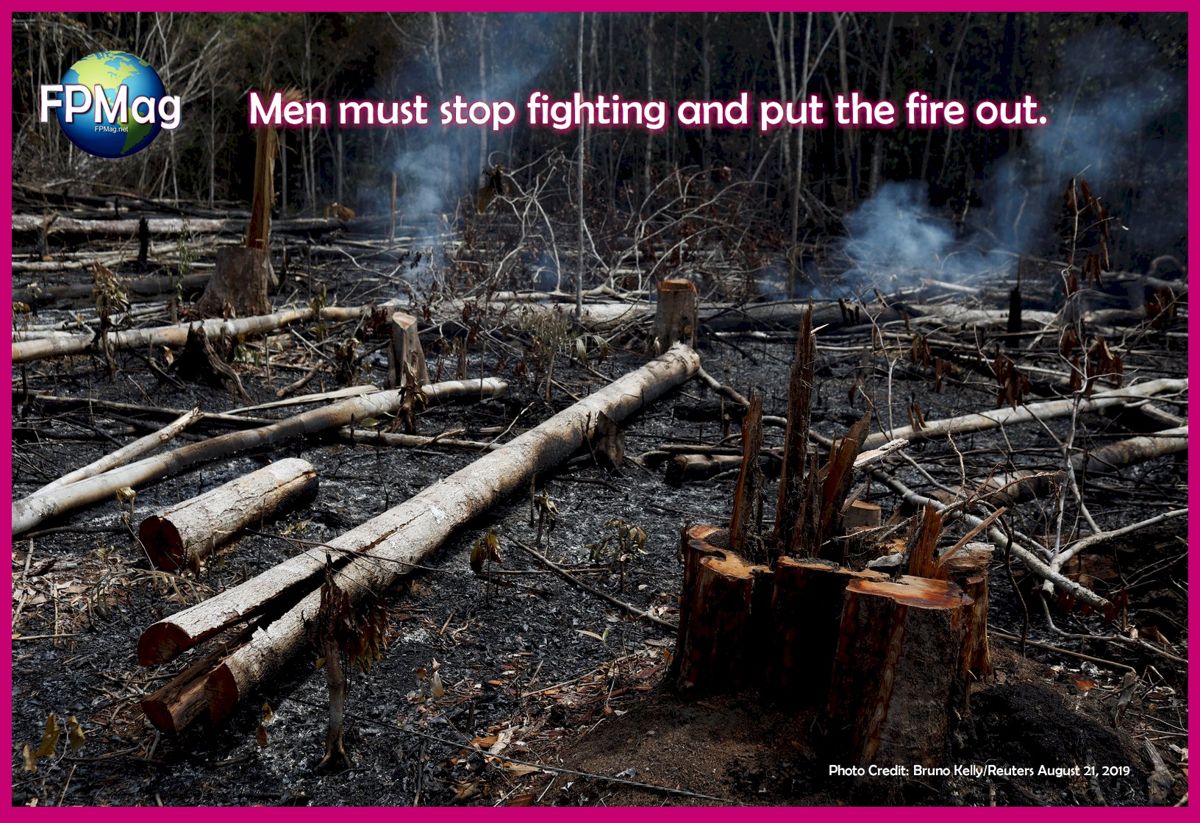 NPR’s Philip Reeves says a reporting trip to the state of Acre in western Brazil gave him a sense of the scale of destruction. “This area of land here — well inside the Amazon rainforest — is burning. I can see charred tree stumps all around me, smoke rising not just above this particular part of the fire but over in the distance,” he says. “All around, I can see the forest. But I can also see a large area — maybe 10, 12 football fields — that has been burned.” Photo Credit: Bruno Kelly/Reuters August 21, 2019 Photo Art: Rosa Yamamoto FPMag