How To: Be climate friendly. Love Macron’s G7 priority, Earth.

Would you like to know how each family can help?

Changing your daily habits is a good way to start. Reduce your carbon footprint and stop using single-use plastics.

From our focus group yesterday, FPMag gleened some fabulous conservation and “green” ideas from women in Canada, Venezuela, China, France, Ghana, Hong Kong, Philippines and Syria. Other idea gifts FPMag collected from the UN Environment group and from National Geographic.

US President Trump’s aids are reportedly angry that French President Emmanuel Macron is trying to focus the G7 group currently meeting in France on Climate Change and the environment.

Donald Trump is under a lot of pressure not to disturb the applecart in the American trash recycle fraud sector. Government officials, civil servants and others, from the municipal level to the topmost government levels are corrupt and on the take from the wealthiest crime sector in the world. Trash. Trash is the new ‘narcotics’.

“People don’t know what’s happening to their trash,” said Andrew Spicer, who teaches corporate social responsibility at the University of South Carolina and sits on his state’s recycling advisory board.

“They think they’re saving the world. But the international recycling business sees it as a way of making money. There have been no global regulations – just a long, dirty market that allows some companies to take advantage of a world without rules.” — The Guardian has launched an extraordinary investigation. A June Guardian report from 11 countries exposes America’s dirty secret and how the US waste makes its way across the world – and overwhelms the poorest nations. 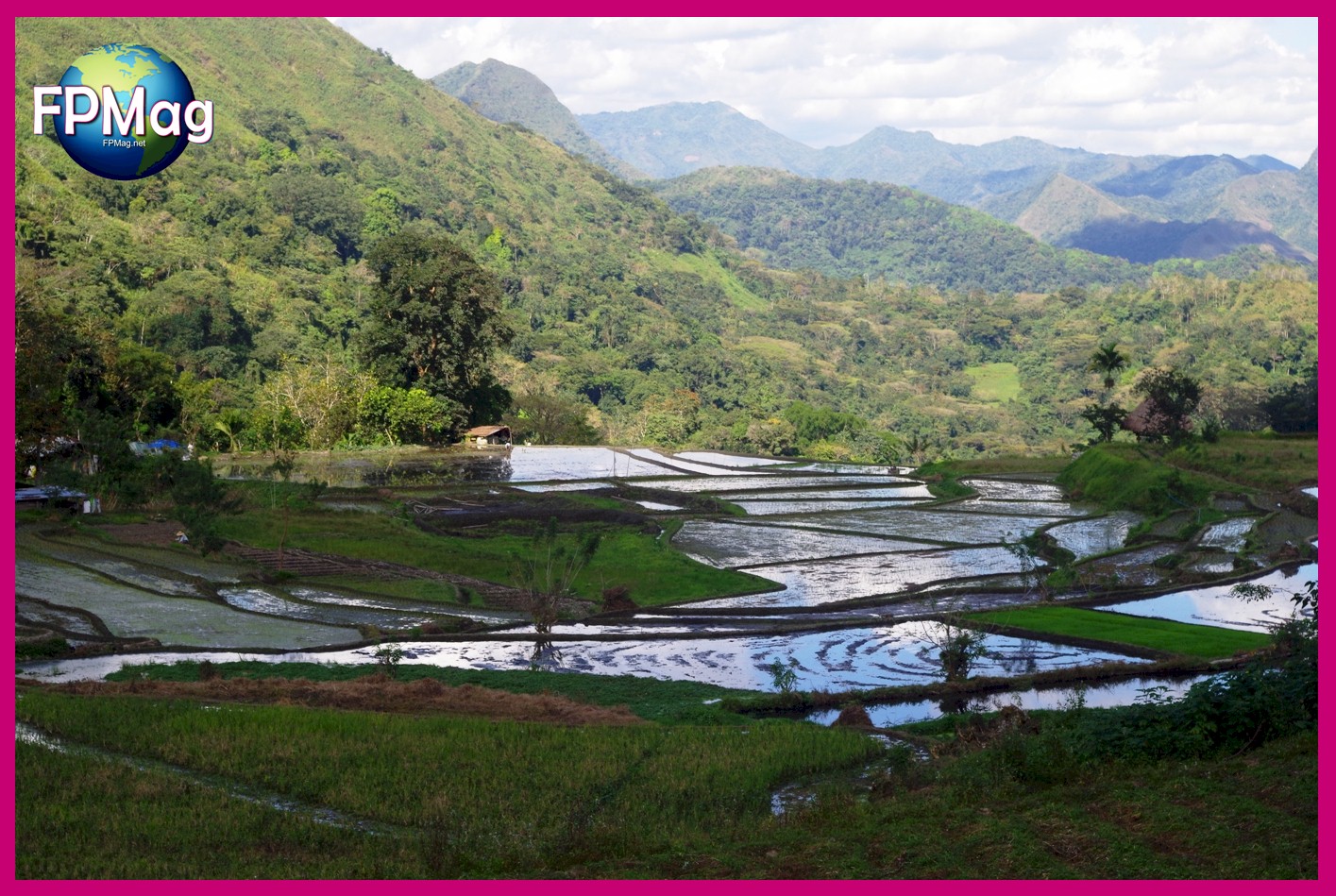 The photo and its story. This is what we wish to preserve. Clean air, good, unpolluted water and great soil for growing. And all that is beautiful to look at. Terrace farming north of Kiangan on Luzon Island not too far from Taiwan. Photo Credit Micheal John. Photo Art: Rosa Yamamoto FPMag

This time series shows carbon monoxide associated with fires from the Amazon region in Brazil from Aug. 8-22, 2019. Made with data collected from the Atmospheric Infrared Sounder (AIRS) on NASA’s Aqua satellite, the images map carbon monoxide at approximately 18,000 feet (5,500 meters) altitude. Each “day” in the series is made by averaging three day’s-worth of measurements. Art/Photo Credit: NASA/JPL-Caltech. You may view a more detailed movie here.

Meatless Mondays and Fridays? That would help.

Conserve water. As you brush your teeth or as you shave, turn off the tap. Always fix dripping pipes and connectors and think about and avoid waste every time you turn on a tap. Other habits to improve might be shorter showers, shallower baths and when you are washing vegetables, fill a bowl with water and turn off the tap.

Cook what you will eat. Do not waste food. How much food was wasted last year in the United States alone, is subject to conjecture but some estimates suggest that food could have fed a billion people. Instead, it is in a landfill site, rotting and producing harmful methane gas.

Get yourself a reusable water tote bottle, filtered if possible. There are numerous inexpensive options on the market. The filtration in most is extremely good. Some are so good they turn urine into potable water. Don’t drink urine. The point is that some filtered bottles are 99% efficient at removing unwanted particles from water to make it safe drinking water. Drink clean water from a filtered bottle. Hopefully that incentivised using your own bottle and not using single use plastics. Some of these filtered water bottles can last a year or more.

Author’s note: I was one of the medical crews in Mosul Iraq once the infrastructure collapsed and after the Gold Division invasion started on October 17 2016.

We saw vividly the importance of clean, safe water. Sadly, in one case where several families were congregated in basements in a single row to access a single purification pump source of potable water, it was bombed by the US Air Force and 200 people were killed. Consequently, all the nurses from that time have urged families to maintain their own water sovereignty. Read Discussion Paper: Mosul Water Crisis

Your government lied to you. Recyclables are mostly not (91%) recycled. You must find alternative action and put pressure on governments.

Corrupt government officials get rich from payments by criminal organizations doing what is called recycling fraud.

Of all the trash that you sorted because your government told you to do that, only 9% is actually recycled, the rest is in your soil or in the oceans.  In other words, it can, without exception be said that your government lied to you.

This garbage disposal industry is a very corrupt area tied to government operations and corrupt government personnel on a scale that is greater than treason think many people.

Trash-crime is  a multi-billion dollar crime sector to which many Chinese Triad criminals have also been attracted as well as the Mafia and other traditional mega-crime organizations.

Malaysia has had a terrible time with criminal trash dumpers since China closed the door on trash dumping on its soil. China’s strong action has shifted the dumpers to South East Asia . ASEAN is now seeing this as a major problem.The president of the Philippines threatened war against Canada for dumping its trash in Manila. Mr. Duterte exposed a rather serious problem in Canada. That discussion has been swept away. Canadians might well bring that back during the final weeks of their federal election.

Watch: The Euronews Channel reported in great detail the Mafia connection to trash. Since then the problem has worsened.

How do I avoid being exploited by corrupt civil servants who ask me to sort garbage and bring it to the curb in neat packages ready for “recycling”, which in fact is not happening.

The United Nations warned in 2018 that every year more than 400 million tons of plastic waste is produced in the world, of which only 9 percent is recycled. Yikes.

Could you bring this up with your electoral candidates at the next democratic election or otherwise write to your government? 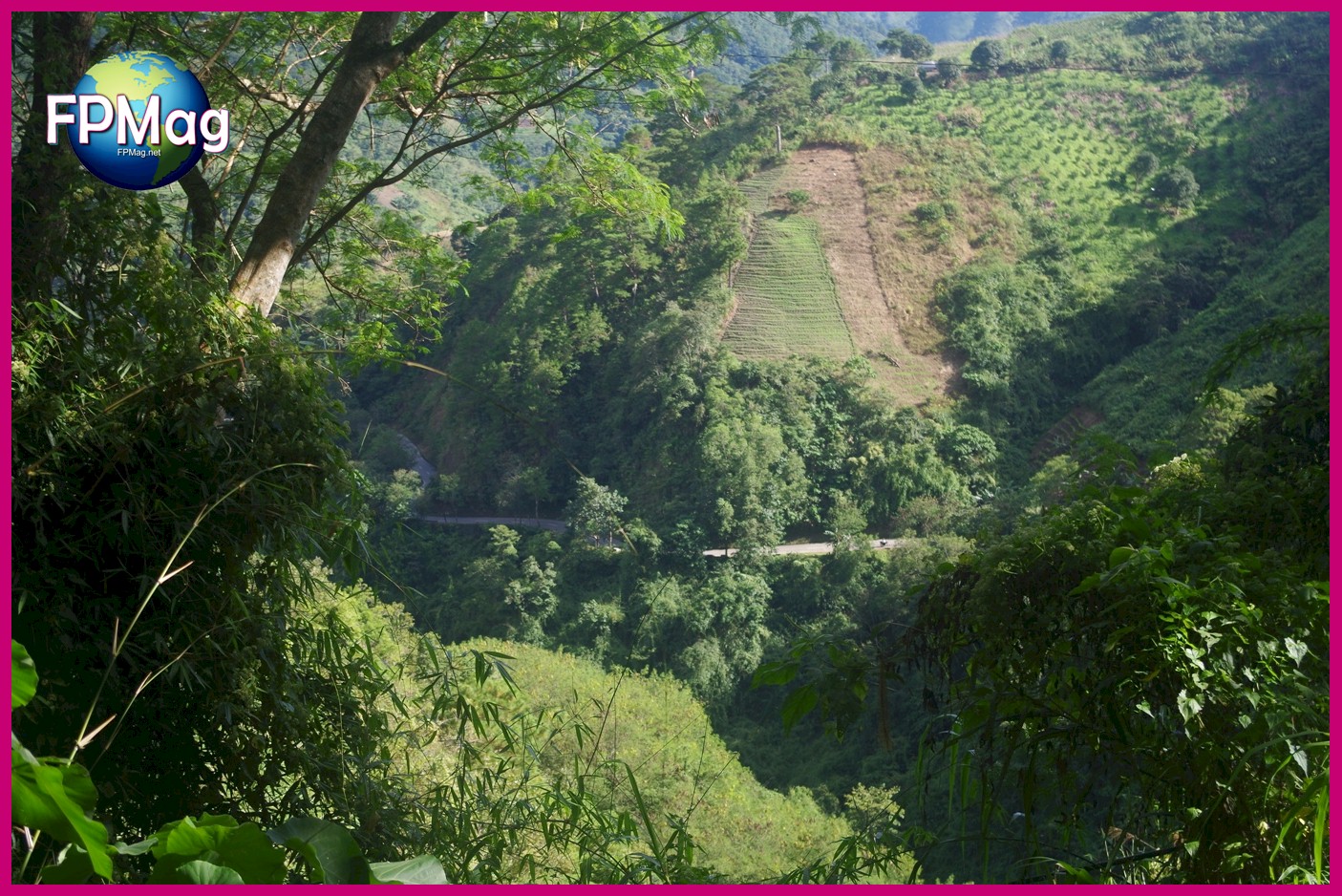 The photo and its story. This is what we wish to preserve. Clean air, good, unpolluted water and great soil for growing. And all that is beautiful to look at. Terrace farming north of Kiangan on Luzon Island not too far from Taiwan. Photo Credit Micheal John. Photo Art: Rosa Yamamoto FPMag

Grow vegetables wherever you may be. Do everything you can to give your family and your community at least some food-sovereignty. Even if you don’t have a garden you can grow vegetables on a window sill.

Keep your automobile pollution-free by maintaining its mechanical condition as excellent and by carpooling whenever you can. Walk when it’s practical or use a bicycle.

Conserve electrical power by plugging devices into grounded power bars and turning them off completely when not in use, including your computers.

Who will you do this for? If not for yourself, do it for these little people. 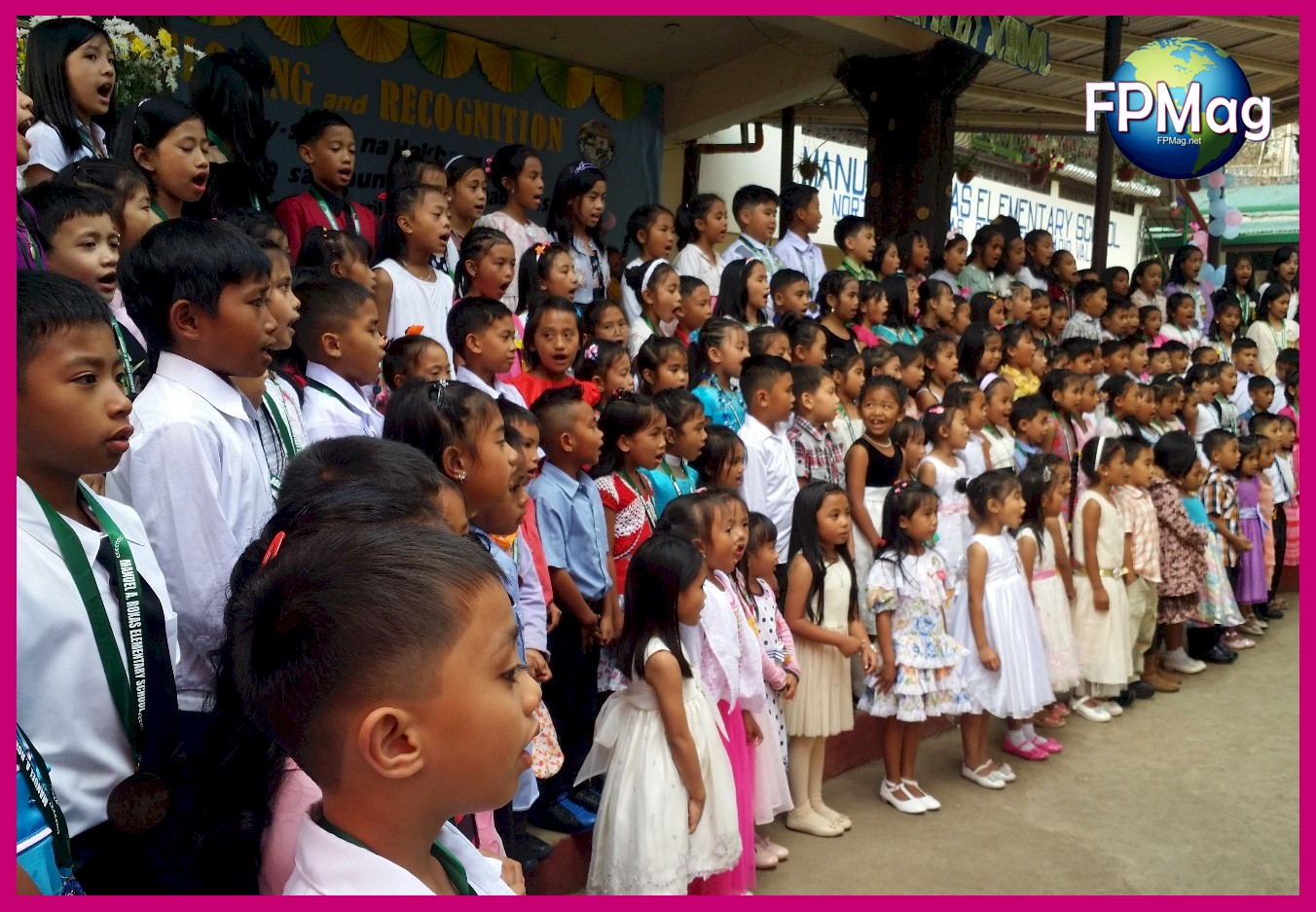 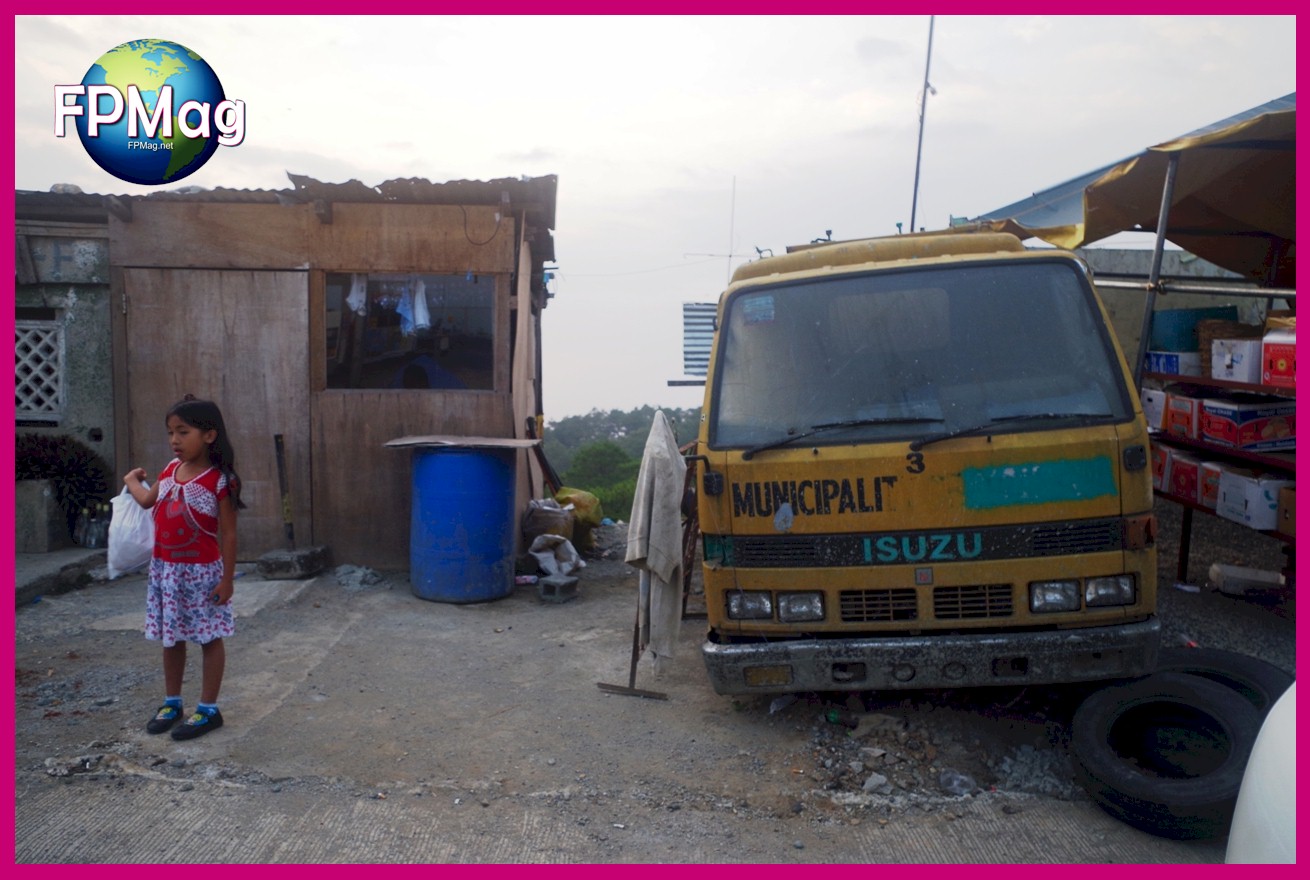 The photo and its story. Fight climate change and preserve nature’s best for the children and our children’s children, plus adults today will see the benefits almost immediately. This is why we wish to preserve a clean environment. Clean air, good, unpolluted water and great soil for growing is the goal. Photo Credit Micheal John. Photo Crop/Resizing/Art: Rosa Yamamoto FPMag

If you see an interesting social media post about women’s rights or climate change, share it so folks in your network see it too. This is important.

Ask your local and national authorities to engage in initiatives that don’t harm people or the planet. You can also voice your support for the Paris Agreement on climate and ask your government representative to ratify it or sign it if it hasn’t yet.

Turn off lights you do not need. Your TV or computer screen provides a cosy glow, so turn off other lights if you don’t need them. 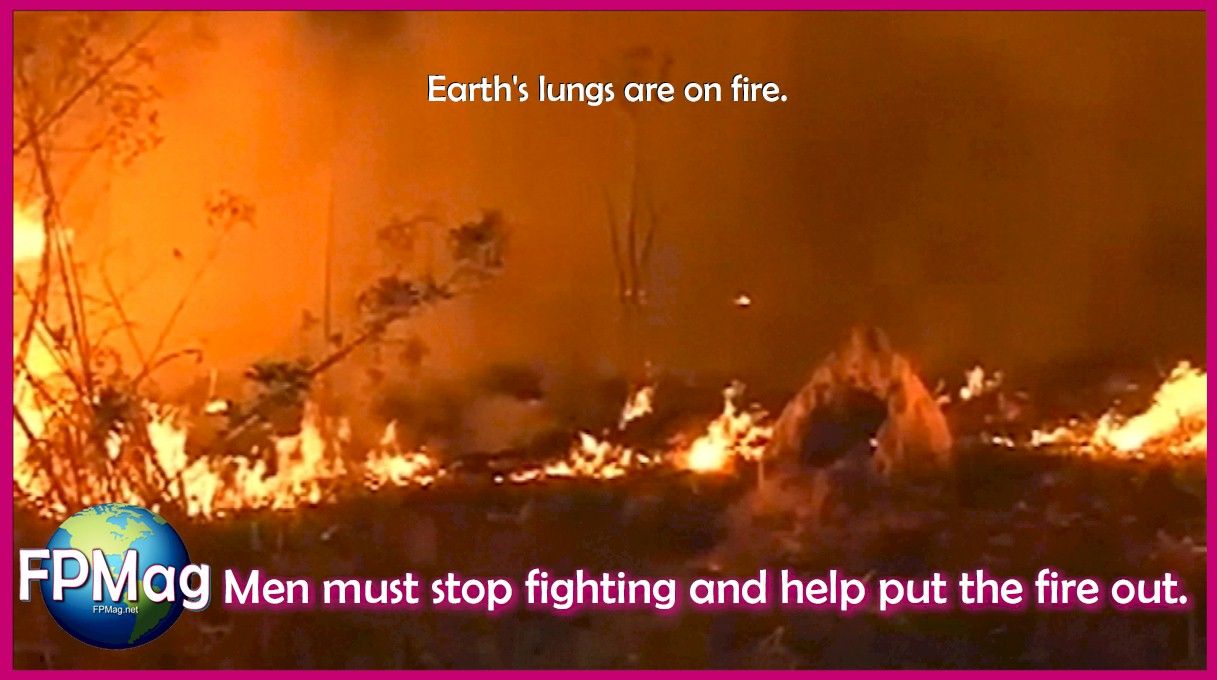 Amazon Fires. Men should to stop bickering about who did this and get to work putting out the fires.  Photo Credit: Youtube video screen capture, Photo Art: Rosa Yamamoto FPMag