Why Trump should resign now.

Five Words of Advice for Trump: Resign now as US President !

Donald Trump has changed the world for the worse by popularizing racism, lowering the value of human life, especially children, and starting a nuclear arms race.

Trump defaulted one of the best and most unlikely-to-obtain treaties, the JCPOA, and caused further destabilization in the Middle East leaving the world on the brink of war.

Why Trump should resign now. by Sharon Santiago 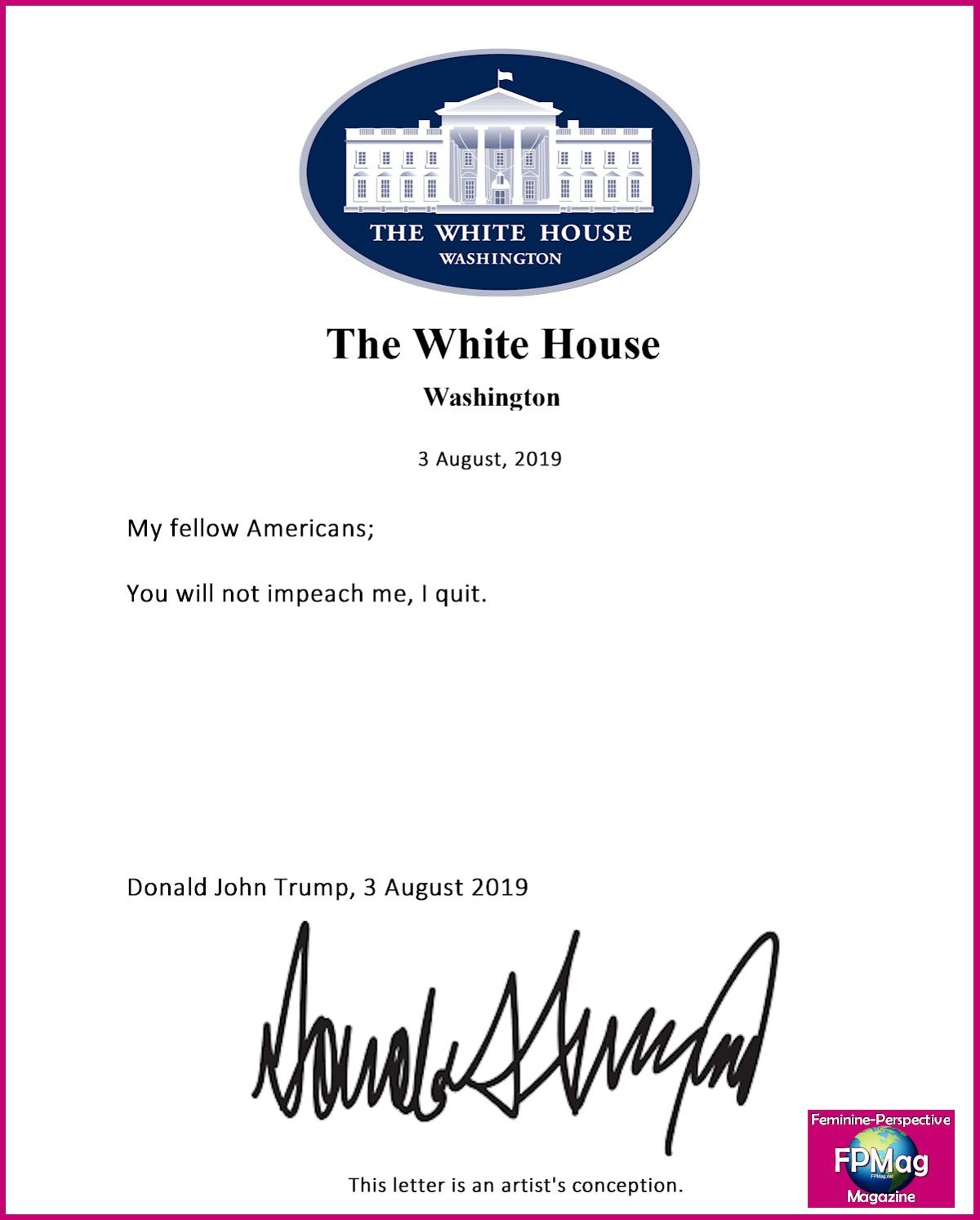 My fellow Americans;
You will not impeach me, I quit.
Donald John Trump, 3 August 2019
Photo Art: Rosa Yamamoto FPMag

For his disrespect toward a great American hero, the late Senator John McCain, Trump deserves worse, but a resignation will suffice. 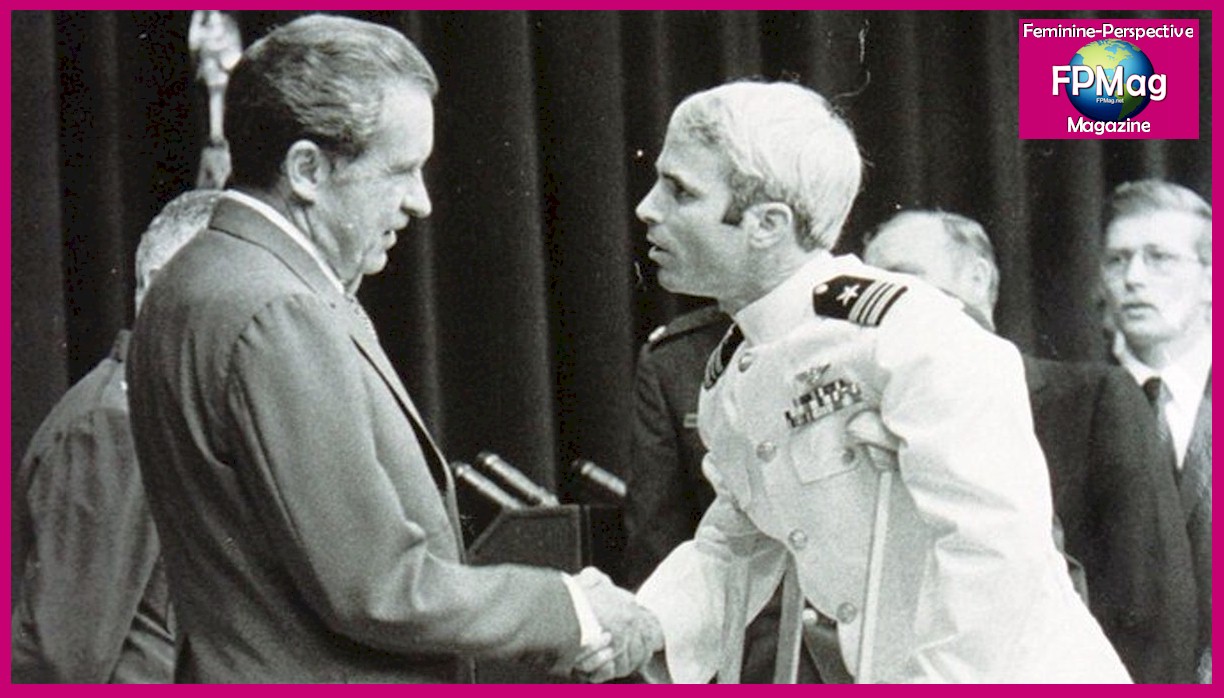 Senator John McCain greeted by US President after being released as a Prisoner of War by N. Vietnam. “Your life is spent on your weekends not with your family, not with your friends, but obsessing, obsessing over great men you could never live up to,” daughter Meghan McCain said of her father on her television program, “The View.”

Trump is spending more money on nuclear weapons than any president ever spent.

The 2020 USA Defense Budget is eight hundred billion dollars and each one of those dollars raises the US federal deficit which is at $22 trillion dollars, greater than all of America’s annual Gross Domestic Product.

Trump is increasing the American debt in order to line the pockets of the rich. And the poor get poorer. 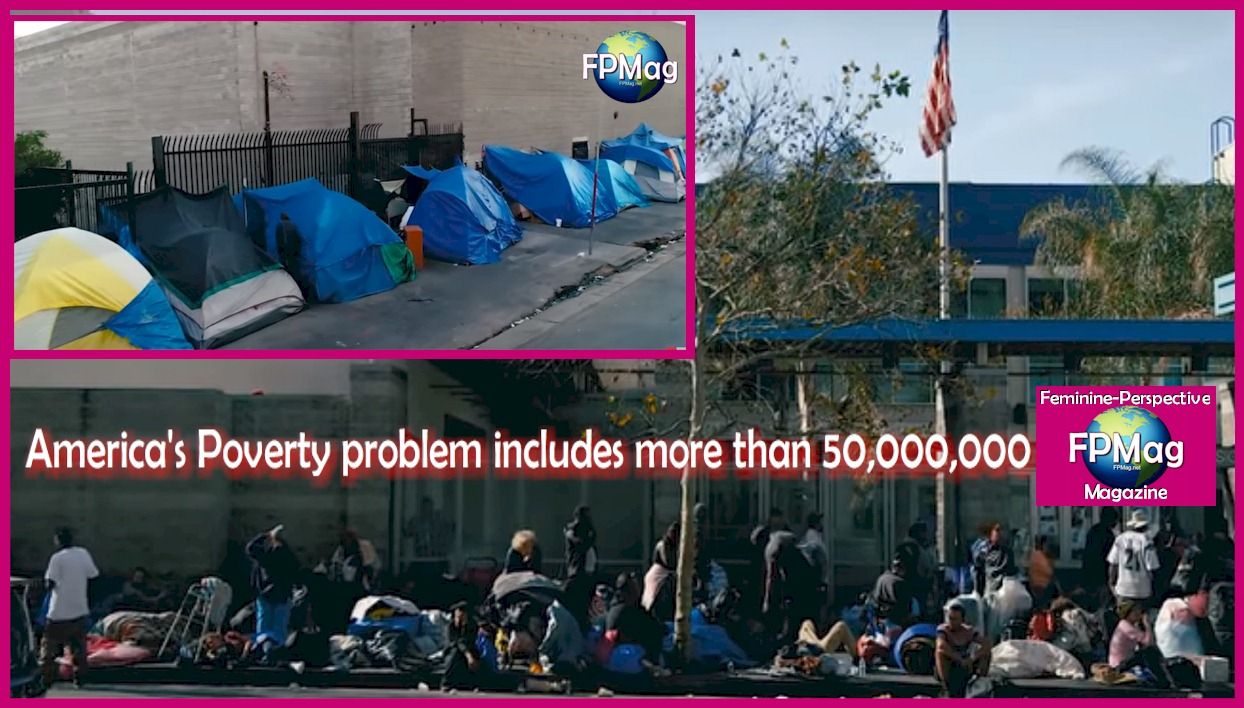 The USA federal deficit for the 2019 fiscal year, according to the World Bank, has reached $747 billion — a 23 percent increase from the year before. The US federal deficit will reach over $800 billion next year. Meanwhile the US Government has passed a bill to “allow the government to keep borrowing for two more years, punting the next showdown past the 2020 elections,” reports the New York Times.

This US President, elected by ill-behaved Russians with an awful sense of humour, has aggravated both his neighbours, Canada and the Mexico, by insulting their leaders and slamming them with outrageous tariffs.

Then Trump tore up the North American Free Trade Agreement and negotiated an identical trade deal (United States Mexico Canada Agreement)  which he knew Congress would never approve because Congress is adversarial to Trump.

The US President’s policy of overlooking the misuse of weapons he sells to Saudi Arabia, slaughtering children and sometimes their families, is unforgivable. It also sends the message that anyone who bombs a busload of defenseless children will have immunity from prosecution. There was a time when the United States would deplore such acts and apply severe sanctions to the perpetrator.

By labeling as “Fake News” the media outlets that do not support “Trump”, Donald Trump makes available a dodge for the worst criminals in the world to use. Other unscrupulous leaders have used this.

Trump’s “Fake News” and his virtual public body slams to reporters have included the entire global “Cable News Network” (CNN), The Washington Post and the New York Times. That would be three of the most award winning outlets in their classes. It’s hard to fathom how Trump’s mind works.

Trump’s mind is another problem. American psychiatrists have reminded the world about the concept of, “Duty to Warn“. Thousands of mental health professionals agree Trump is dangerous. The Washington Examiner said it best.

Mental health experts warned in an online event meant to convince Congress and the public Tuesday that President Trump incited his followers to violence, with one psychiatrist comparing Trump’s rallies to those of Adolf Hitler.

The experts, four psychiatrists and one clinical psychologist, presented their positions alongside a mental health analysis of special counsel Robert Mueller’s 448-page report, in which they concluded Trump does not have the sound mental capacity to function in his role as president.

Dr. James Merikangas, a psychiatrist from George Washington University, said the chanting at Trump’s rallies were reminiscent of “Nuremberg rallies that Adolf Hilter had.” He did not cite specific examples, but Trump rally-goers have chanted “lock her up” about Hillary Clinton and recently chanted “send her back” of Democratic congresswoman Ilhan Omar of Minnesota, who was born in Somalia.

“We believe he is a danger to the public,” Merikangas said of Trump. … Kimberly Leonard / Washington Examiner

“The way he gins up the crowd with his chants and with his incitement to violence is reminiscent of the Nuremberg rallies that Adolf Hitler had,” Merikangas said.

“That is very, very scary, he added.”

Trump doesn’t really get along with anyone except maybe a few despots and murderers like Philippines President Rodrigo Duterte and Saudi Arabia’s Mohammad bin Salman.

Trump has fired members of his administration who have spoken the truth. Dan Coats is a recent example. 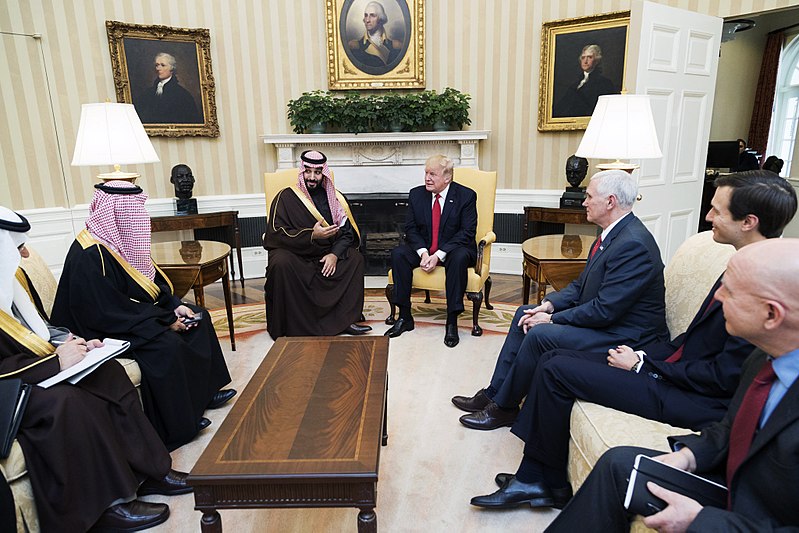 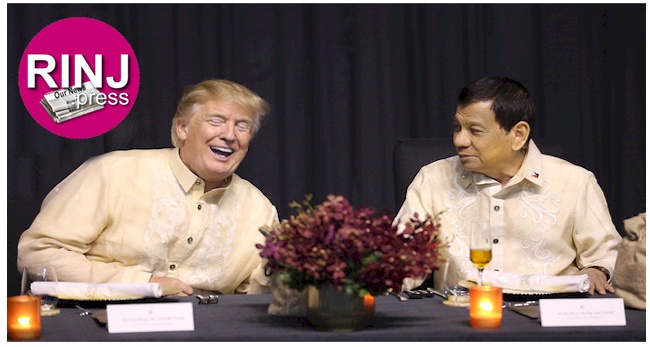 By participating in the murder of Jamal Khashoggi, Donald Trump sent a message to the world that it is OK to murder journalists.

Trump’s crimes against humanity in Yemen have migrated to Syria where the regime of Bashar al Assad has been bombing schools, school buses and hospitals with apparent impunity.

Trump has made it acceptable to discriminate against religious groups. One of the first things he did when he came into office was to ban Muslims coming into the United States.

And Trump has not helped America either. It’s another Trump lie.

Fifty-one percent of all Americans, according to a 30 July  poll, see Donald Trump as a racist. Hating people of color is really not a good thing to find in an American President.

Donald Trump has a long history of being a swindler and a liar.

Who needs a swindler and a liar in the White House? His attacks on Elijah Cummings opened in the week that the INF nuclear treaty ended following the 6 month notice Trump gave to Russia. Trump wanted news headlines to be focused on racism, not a nuclear arms race.

Trump has claimed that Elijah Cummings has failed in his work as a Congressman because the apartments in Baltimore are infested with rodents.

Donald Trump was so eager to find a diversion he overlooked the fact that his son-in-law is responsible for the rat infested districts of Baltimore. USA Today shares what Associated Press saw as a great irony.

“Davon Jones doesn’t have to look far to see the irony in President Donald Trump’s tweets that Baltimore is a “rat and rodent infested mess.” His apartment owned by the president’s son-in-law has been invaded by mice since he moved in a year ago,” says a USA Today/AP article.

“I don’t know how they come in,” Jones says. “Every time I catch them, they come right back.”

“Jared Kushner’s family real estate firm owns thousands of apartments and townhomes in the Baltimore area, and some have been criticized for the same kind of disrepair and neglect that the president has accused local leaders of failing to address. Residents have complained about mold, bedbugs, leaks and, yes, mice — plenty of mice. And they say management appears in no hurry to fix the problems,” continues the  USA Today/AP article.

America’s Wealth is in the hands of fewer Americans.

Yes, the rich have grown richer. Washington DC’s lobbyists and a few executives across the country are making a bundle of money off Trump’s alleged sale of 110 billion in armaments sold to Saudi Arabia, the worst human rights violator on Earth.

Very few economists bother with this point but the heavy tariffs on Chinese goods have reduce the quality, value and assortment of inexpensive items available to the poorest of Americans. Trump hates poor people as do most of his peer group of wealthy sociopaths.

Trump trumpets statistics that indicate unemployment records dropping but that is because workers are leaving the labour force in record numbers, according to the U.S. Department of Labour. Their work, at the low skilled level, has been done by cheaper workers in faraway lands.

“The official rate of unemployment is a ratio of the number of people counted as unemployed to the number considered to be in the labour force, which includes everyone who has a job or wants one. The unemployment rate can wobble for all sorts of reasons. It rose toward 10% during the Great Recession as employers shed staff. Early in the recovery, the unemployment rate began to drop even though hiring remained weak, because workers frustrated by the lack of jobs stopped looking for work and were no longer counted as part of the labour force. The unemployment rate is so low at the moment not only because hiring has been strong, but also because some people who might otherwise be counted as jobless are still not looking for work.

“Joblessness in America has fallen steadily thanks to the longevity and the sturdiness of the American recovery. America’s stretch of unbroken growth, which began in June of 2009, will become the longest on record in 2019 (assuming it continues). Over most of that time, the economy has consistently added between 2m and 3m jobs per year. Recent tailwinds, like a broadening of global growth and a fiscal stimulus provided by Donald Trump’s tax cut, have spurred the economy. But the patience of the Federal Reserve deserves most credit. Most economists reckon that countries have a “natural” rate of unemployment determined by the flexibility of the labour market, and that when unemployment drops below that rate inflation begins to accelerate upward. But where that natural rate lies is unclear. Several years ago, Fed officials estimated it to be about 5%. But as unemployment approached and dropped below that level, the Fed moved only gradually and slowly to raise interest rates and rein in growth. The fact that inflation has remained low even as unemployment has fallen below 4% suggests they were right to allow the recovery to continue apace,” adds The Economist/R.A.

The biggest complaint of large corporations  in the United State is that they are unable to find skilled workers. They must import workers from other countries. The fact that there are so many positions vacant and unfulfilled, which is a factor in the unemployment statistics, is because there is a dearth of skilled workers in the United States and there is little to no work for unskilled labourers because those jobs are done by cheap labour in other countries.

There are over 50 million Americans living in poverty. Visit the United States and you will see them living under decaying bridges and on the sidewalks of the inner cities of the United states.

Resign now as US President.