After shooters failed to kill Brandon Lee this week, on August 7, 2019, 5:56 pm the government of the Philippines issued a statement to say that Mr. Lee was not shot because of being a journalist.

Thirty-seven-year old Mr. Lee  was shot in the head (face) probably because he was among Ifugao Peasant Movement (IPM) members and a Ifugao human rights worker, implies the government statement, which rambles on about various activities of the human rights activist.

Mr. Lee had been fighting for the safety of Lumad (indigenous) women and children in the Philippines. 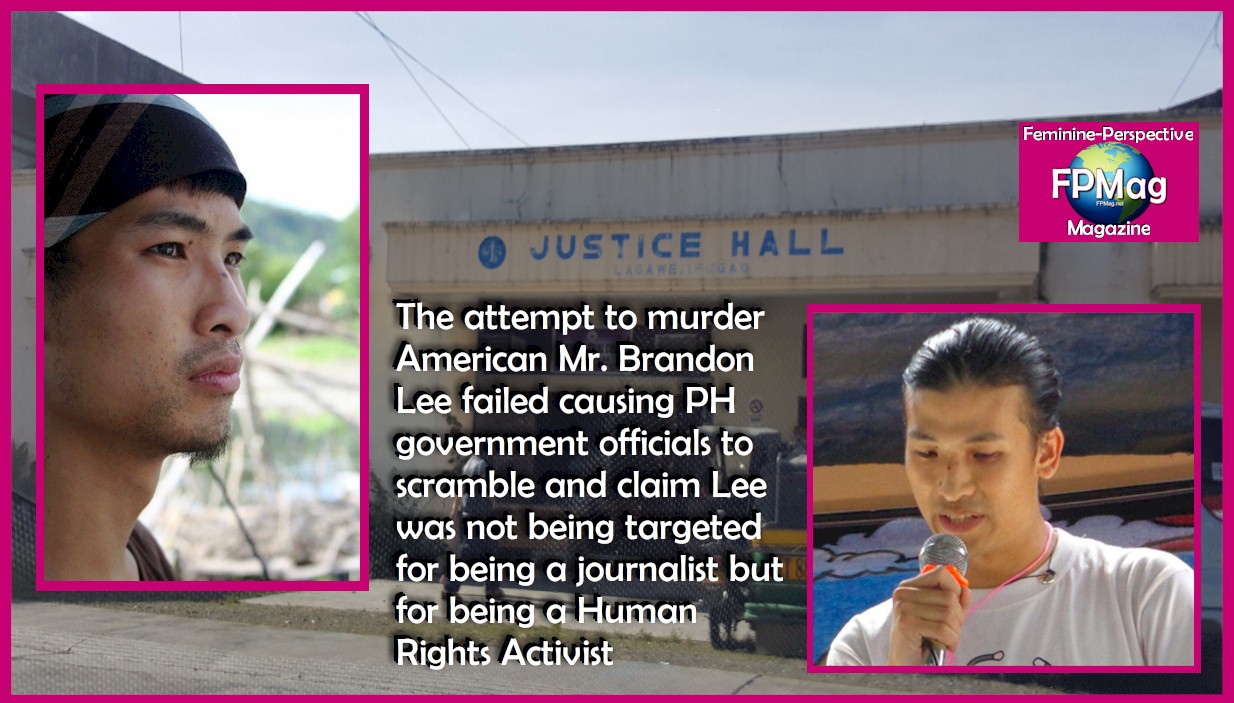 The attempt to murder American Mr. Brandon Lee failed causing PH government officials to scramble and claim Lee was not being targeted for being a journalist but for being a Human Rights Activist.
Lagawe photography by Melissa Hemingway
Mr. Lee’s Images are from his Facebook page.
Photo Art: Rosa Yamamoto FPMag

by Katie Alsop in Toronto for Feminine Perspective Magazine

Apparently these IMP farmers are being accused by the Duterte government of supporting the New People’s Army (NPA) because they have been fighting for the safety of Lumad children Duterte had threatened to bomb.

Mr. Duterte has claimed that the Lumad schools Mr. Lee has been defending have been teaching children some liberal or socialist values related to caring, sharing and farming. 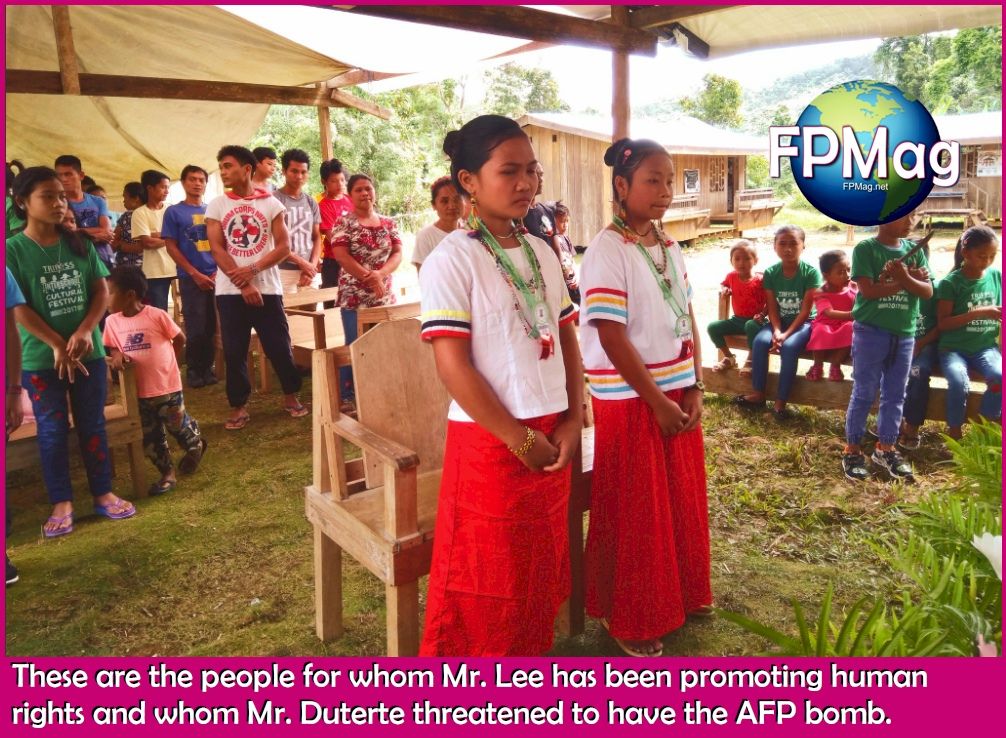 Here they are, the Lumads at school. These two will get an award.

These are the people for whom Mr. Lee has been promoting human rights and whom Mr. Duterte threatened to have the AFP bomb.
Source: Twitter
Photo Art: Rosa Yamamoto FPMag

Here are our sun-dried seeds ready to plant for the next cropping cycle!

Part of our sustainable agriculture program is the preservation of seeds from the Lumad communities for community seed banking.#SustainableAgriculture#LongLiveLumadSchools pic.twitter.com/2Dlf3BxxXd

The NPA is a fabled pitchfork army of farmers of the Philippines Communist Party which exists in exile in the Netherlands. Read if you wish: RINJ-Press-FPMag-Ifugao-journo-shooting-incident-not-work-related_PTFoMS_-Philippine-News-Agency

The ubiquitous Duterte Death Squads (DDS) infrastructure in the Philippines  may have stepped over a line from which there is no return. Trying to kill Brandon Lee, 37 of Lagawe, Ifugao Philippines was something Duterte was warned not to do by the USA State Department, says a source.

“If his people did not give him the message, that’s too bad,” says a foreign  investigator who remains anonymous because she is not authorized to speak on behalf of the US Embassy in Manila.

North of Lagawe is a region of the province which is famous for its terrace rice farms.

Brandon Lee stands out as a human rights activist who has been working as a paralegal in the court system of Ifugao. He is an American who married a Filipino person.

Mr. Lee, a regional correspondent for Northern Dispatch, was shot by persons described by Melissa Hemingway as being exactly like all the other shooters. Melissa is presently in or nearby Lagawe working on the story for FPMag.

One account Melissa was given was that last week a certain associate of Mr. Lee whose name is Kristin Lim, a one time manager of Radyo Lumad, was visited by members of the Armed Forces (AFP) of the Philippines for questioning about the whereabouts of Mr. Lee.

The consensus in Lagawe is that because Mr. Lee and associates were investigating the government persecution of the indigenous group known as the Lumad tribe in Mindanao, the AFP had a particular interest. A visit to social media pages of these schools iluminates an obvious struggle and lack of safety.

A little over a year ago, the AFP has issued a statement which was published in the Inquirer (AFP denies torching Lumad schools in Mindanao)

The Armed Forces of the Philippines on Friday dared its accusers to prove the “preposterous and malicious allegations” that they were burning down schools for indigenous peoples or Lumads in Mindanao.

“We challenge our accusers. Provide details which schools, where, and when the alleged acts committed,” said AFP spokesperson Col. Edgard Arevalo in a statement.

Read if you wish: AFP-On-the-alleged-militarization-of-Lumad-communities

Because  Northern Dispatch and Radyo Lumad media outlets have been critical of the Duterte regime’s security forces’ treatment of Lumad groups (Lumad means indigenous) they were labelled as “Communists”.

“Lumad” is the self-ascription and collective identity of the non-Islamized indigenous peoples of Mindanao.

“I will use the armed forces, the Philippine Air force. I’ll really have those bombed… because you are operating illegally and you are teaching the children to rebel against government,” he said in remarks that were later walked back after criticism from rights groups and from representatives of the communities themselves.

Melissa Hemingway reports from Ifugao that, “In the Philippines, because of the President’s indefinite quarrels with indigenous peoples, there are several groups defined as state enemies including various Muslim human rights and indigenous tribal groups (some say are distant relatives of North american indigenous peoples).

“These so-called enemies are often blamed for predicted “uprisings” or “increasing in numbers” when the Philippines National Police or the Armed Forces of the Philippines needs more weapons or when they have been caught out in some kind of wrong doing. But these groups never seem to materialize in any aggressive form. They only ever seem to take the form of human rights advocates.”

Paraphrasing a women who works as a waitress in Lagawe, said Melissa on the phone, “If the Duterte government wants to kill someone it does not like because of effective opposition, before killing them it labels the person one or  more of

That nearly happened to Mr. Lee who was shot outside his home on Tuesday evening by gunmen. He has been moved from Ifugao province to a hospital in Nueva Viscayez near the Capital and thereafter moved to Baguio City. He is expected to be able to give a statement later today, FPMag was told shortly before noon by an associate of Mr. Lee.

These are the people for whom Mr. Lee has been promoting human rights and whom Mr. Duterte threatened to have the AFP bomb. 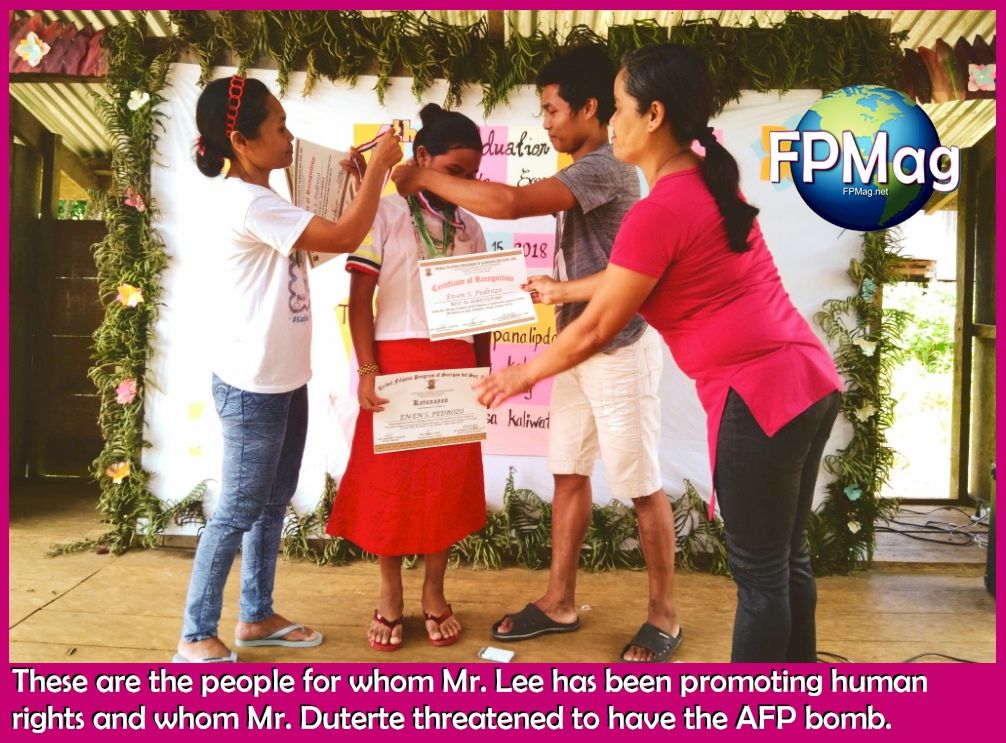 These are the people for whom Mr. Lee has been promoting human rights and whom Mr. Duterte threatened to have the AFP bomb.
Source: Twitter
Photo Art: Rosa Yamamoto FPMag