Just when it appeared that things could not get any worse in the United States response to the COVID-19 outbreak, Donald Trump fires the top man in the US in vaccine development because he refused to promote the drug Trump partly owns via three family trusts.

There are many gullible cultists in the world who will do whatever Donald Trump asks them to do, including protesting with assault rifles against Michigan Governor Gretchen Esther Whitmer in a swarming crowd in the midst of a deadly respiratory disease pandemic.

Dr. Rick Bright Ph. D. a man whose hiring authority claims is a person of highest integrity is not one of those gullible people.

A move by Trump to force US agencies to fund drug companies for which he indirectly owns shares, has opened a WhistleBlower investigation.

The American organization that is spearheading the development of a SARS-CoV-2 vaccination, Biomedical Advanced Research and Development Authority (aka BARDA) loses its top man, director Rick Bright who will now work at the National Institutes of Health on diagnostics for SARS-CoV-2 infection.

“I believe this transfer was in response to my insistence that the government invest the billions of dollars allocated by Congress to address the COVID-19 pandemic into safe and scientifically vetted solutions, and not in drugs, vaccines and other technologies that lack scientific merit,” he says in a statement. 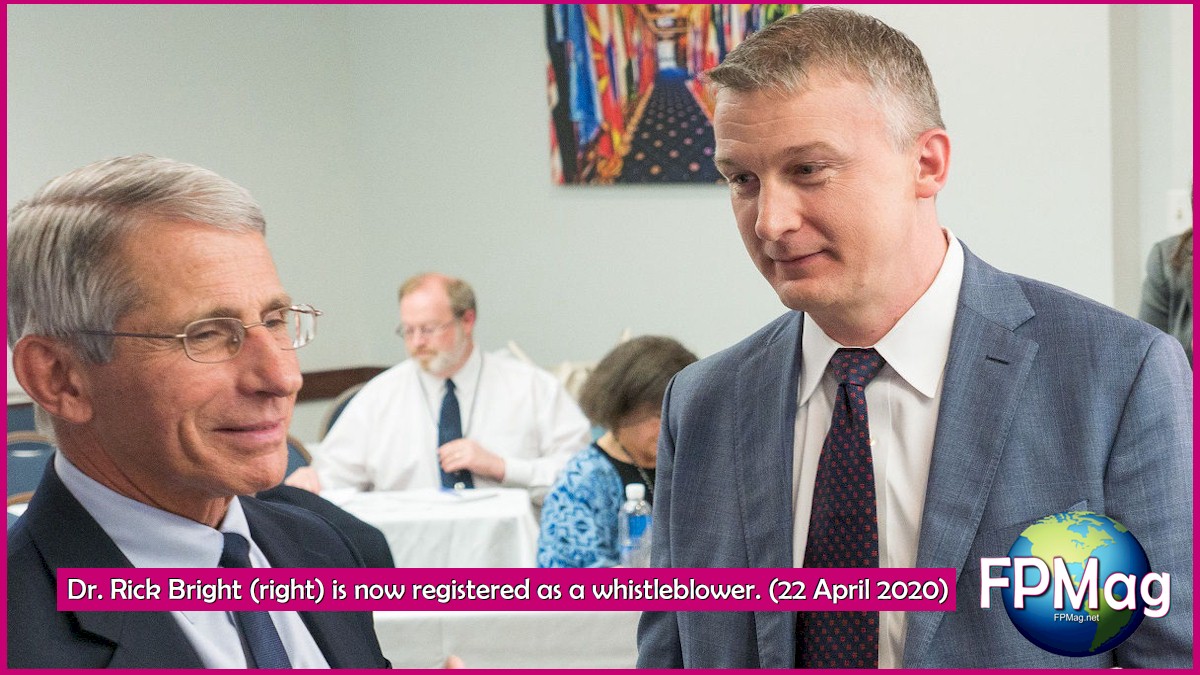 Former BARDA Director Rick Bright (right) with National Institute of Allergy and Infectious Diseases Director Anthony Fauci (left) The move is a direct response to his resistance to “misguided directives” to support the use of malaria treatments chloroquine and hydroxychloroquine for coronavirus, he adds.
Bright says he will be asking the inspector general of the Department of Health and Human Services to investigate the Trump administration’s politicization of BARDA and its pressuring scientists to favour companies with political connections. Photo Credit: WikiMedia  Photo Art/Cropping/Enhancement: Rosa Yamamoto FPMag

So the issue on the Trump/Sanofi thing is that if I were planning to make money off talking up a stock, I’d … invest directly in the stock, not a small portion through a mutual fund. Like if I’m talking up Apple and am invested in an S&P index, I’m doing it wrong.

Caution:  Many practitioners believe Hydroxychloroquine is contraindicated for heart patients. It is not approved for the treatment of COVID-19 and the largest test (still awaiting peer review) so far suggests it is contraindicated for this purpose.  Trump doesn’t own Sanofi stock in his own name. His 2019 financial disclosures suggest he holds it in three family trusts through an investment in the mutual fund company Dodge & Cox’s international stock fund, according to a report published by Vox.  Dodge & Cox, notes  Sean Collins, suggests “that includes shares of a number of drug companies — including AstraZeneca, Novartis, Bayer, GlaxoSmithKline, and Sanofi all of which would benefit from a global switch to the use of the Trump suggested drug list.”

Dr. Bright refused to push Donald Trump’s choice of medicine to use against COVID-19 and he explains why. FPMag has received negative reports on the drug.

According to Michele Francis, a senior official and Nurse Practitioner with The Nurses Without Borders in South America, she had been working indirectly in South America with a stranded Canadian, the son of an 81-year-old COVID-19 patient in Montreal. The patient had a heart condition but had responded well to two blood transfusions during his care and was on oxygen. The patient had been given a mild dose of a medication to suppress cytokine aggression and was doing very well. For some unknown reason, because of hospital policies (?) after the patient was removed from intensive care and sent to an isolation ward with good vitals, he was, in defiance of contraindications given hydroxychloroquine, his condition deteriorated fast and he promptly died overnight.

According to Francis, this has been the outcome for patients with heart conditions all around the world. “Stop using this drug,” she warns. “It is contraindicated in most of the cases wherein a senior has become very ill because of the high probability of underlying illness that is adversely impacted by this medication.”

Dr. Rick Bright in his own words.

“Yesterday, I was removed from my positions as the Director of the Biomedical Advanced Research and Development Authority (BARDA) and HHS Deputy Assistant Secretary for Preparedness and Response by the Administration and involuntarily transferred to a more limited and less impactful position at the National Institutes of Health. I believe this transfer was in response to my insistence that the government invest the billions of dollars allocated by Congress to address the COVID-19 pandemic into safe and scientifically vetted solutions, and not in drugs, vaccines and other technologies that lack scientific merit. I am speaking out because to combat this deadly virus, science — not politics or cronyism — has to lead the way.

“I have spent my entire career [see WHO Bio] in vaccine development, in the government with CDC and BARDA and also in the biotechnology industry. My professional background has prepared me for a moment like this — to confront and defeat a deadly virus that threatens Americans and people around the globe. To this point, I have led the government’s efforts to invest in the best science available to combat the COVID-19 pandemic. Unfortunately, this resulted in clashes with HHS political leadership, including criticism for my proactive efforts to invest early in vaccines and supplies critical to saving American lives. I also resisted efforts to fund potentially dangerous drugs promoted by those with political connections.

“Specifically, and contrary to misguided directives, I limited the broad use of chloroquine and hydroxychloroquine, promoted by the Administration as a panacea, but which clearly lack scientific merit. While I am prepared to look at all options and to think “outside the box” for effective treatments, I rightly resisted efforts to provide an unproven drug on demand to the American public. I insisted that these drugs be provided only to hospitalized patients with confirmed COVID-19 while under the supervision of a physician. These drugs have potentially serious risks associated with them, including increased mortality observed in some recent studies in patients with COVID-19.
“Sidelining me in the middle of this pandemic and placing politics and cronyism ahead of science puts lives at risk and stunts national efforts to safely and effectively address this urgent public health crisis.

“I will request that the Inspector General of the Department of Health and Human Services investigate the manner in which this Administration has politicized the work of BARDA and has pressured me and other conscientious scientists to fund companies with political connections as well as efforts that lack scientific merit. Rushing blindly towards unproven drugs can be disastrous and result in countless more deaths. Science, in service to the health and safety of the American people, must always trump politics.

“I am very grateful for the bipartisan support from Congress and their confidence in my leadership of BARDA as reflected in the generous appropriation to BARDA in the CARES 3 Act. It is my sincere hope that the dedicated professionals at BARDA and throughout HHS will be allowed to use the best scientific acumen and integrity to continue their efforts to stop the pandemic without political pressure or distractions. Americans deserve no less.”