Despite the CDC demand for “safe, sustainable and effective quarantine”, US President Donald Trump is pushing civil disobedience protests into the streets. He wants his campaigners to undermine State authorities by protesting against “Stay Home” quarantine orders by State Governors. Protestors also declare that COVID-19 is fake news, according to the signs Trump’s campaigners carry, and according to the speeches they are making. Arrests have been made and weapons have been confiscated.

“The Trump Administration’s dangerous lack of leadership and medical response to the deadly COVID-19 pandemic has killed many thousands of Americans unnecessarily, but these large gatherings are likely to cause huge bumps in the numbers,” says Israeli security analyst Simon Baldock.

“Observers now fear Donald Trump will kill more people by rabble rousing certain Americans who are violent, jobless, poor, possibly malnourished, probably malcontent, exploitable and have nothing to live for except intellectually bankrupt concepts of personal grandeur in serving a great cause than their personal safety, making America great again(?),” the security intelligence specialist added.

The Trump administration still has not created and implemented a sustainable test-treat -trace infrastructure and system.  He was formally warned that he should do that in December 2019 and more forcefully in 3 January 2020 according to sources close to the information, corroborated by Washington Post and New York Times revelations.

What is much more alarming, Trump is pushing thousands of protesters into the streets from his election campaign, to harass State government’s who have implemented State-wide quarantines. These persons have been risking their lives all Saturday and many may perish as a result.

Donald Trump is stoking the anger of protesters. Encouraging them to defy their Governors. The Stable Genius is having a hard time wrapping his stable genius mind around the concept of the difficulty of going back to work if you’re dead.

The death rate in the United States is rising fast and will continue to rise quickly as a percentage of known cases for two reasons.

“In the latter instance, (2 above) it is predictable that the number of cases will increase as Mr. Trump provokes more social collectivity in yelling protests spewing virus bundles into bare faces. This is contraindicated by everything we know about the SARS1 and SARS2 viruses,” says Dr. Anderson of The RINJ Foundation.

Another argument suggests that a *high volume viral load that begins infection is what can trigger cytokine storms. This is a generalized assumption that derives from HIV and other virus research.  “Untreated AHI was associated with a cytokine storm of 12 out of the 33 cytokines analyzed… In early treated  individuals, time to viral load suppression correlated positively with plasma CXCL13 at the early chronic phase (rho?=?0.83, P?=?0.042)” Cite: Muema, D.M., Akilimali, N.A., Ndumnego, O.C. et al. Association between the cytokine storm, immune cell dynamics, and viral replicative capacity in hyperacute HIV infection. BMC Med 18, 81 (2020). https://doi.org/10.1186/s12916-020-01529-6

The American Centers for Disease Control sets out the following doctrine:

“Trace and monitor contacts of infected people. Notify them of their exposure.

“Expand staffing resources. Contact tracing in the US will require that states, tribes, localities and territorial establish large cadres of contact tracers.

“Use digital tools. Adoption and evaluation of digital tools may expand reach and efficacy of contact tracers.

Cite CDC: Complete document is at: Centers for Disease Control 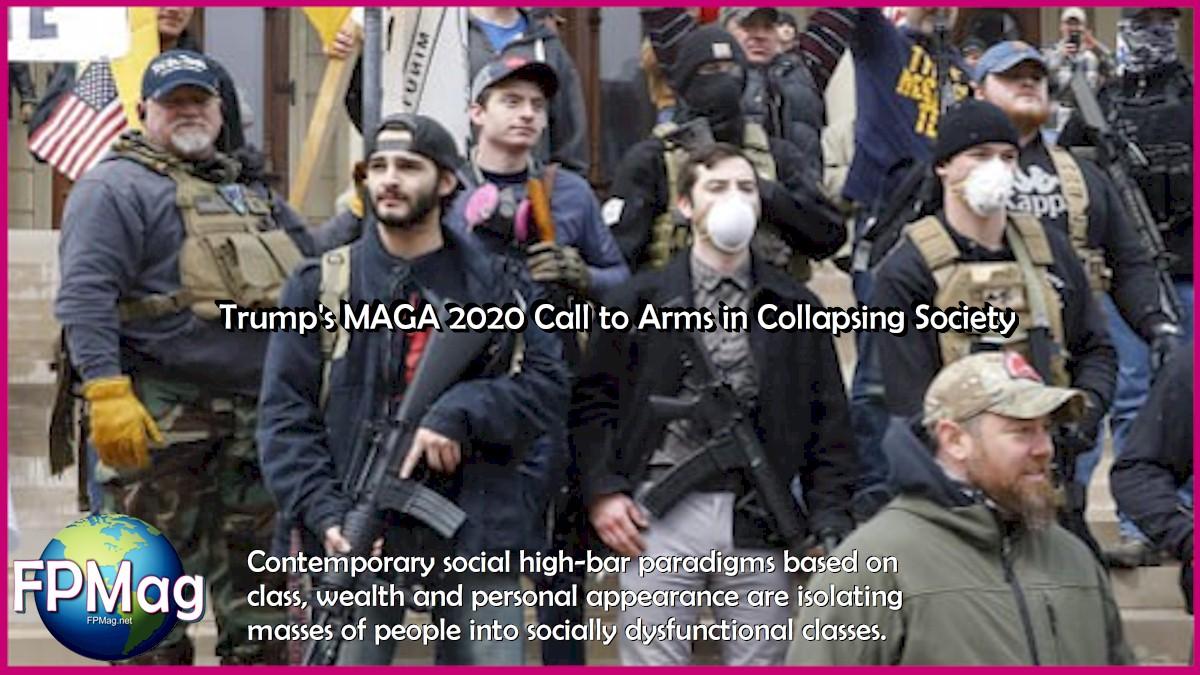 Trump’s Call to Arms against governors who correctly apply social distancing rules. They are likely to support right-wing populist cults led by extremist, combative leaders, like Adolf Hitler for example. They already are disenfranchised by a society that sets the bar far too high for most communities to attain. This disenfranchisement breeds anger and dissent. As such these individuals  can be manipulated with hate for ethnicities, religion or political affiliations as a way of leveraging individuals’ feelings of “not belonging”. Photo Credit: Twitter.  Photo Art/Cropping/Enhancement: Rosa Yamamoto FPMag 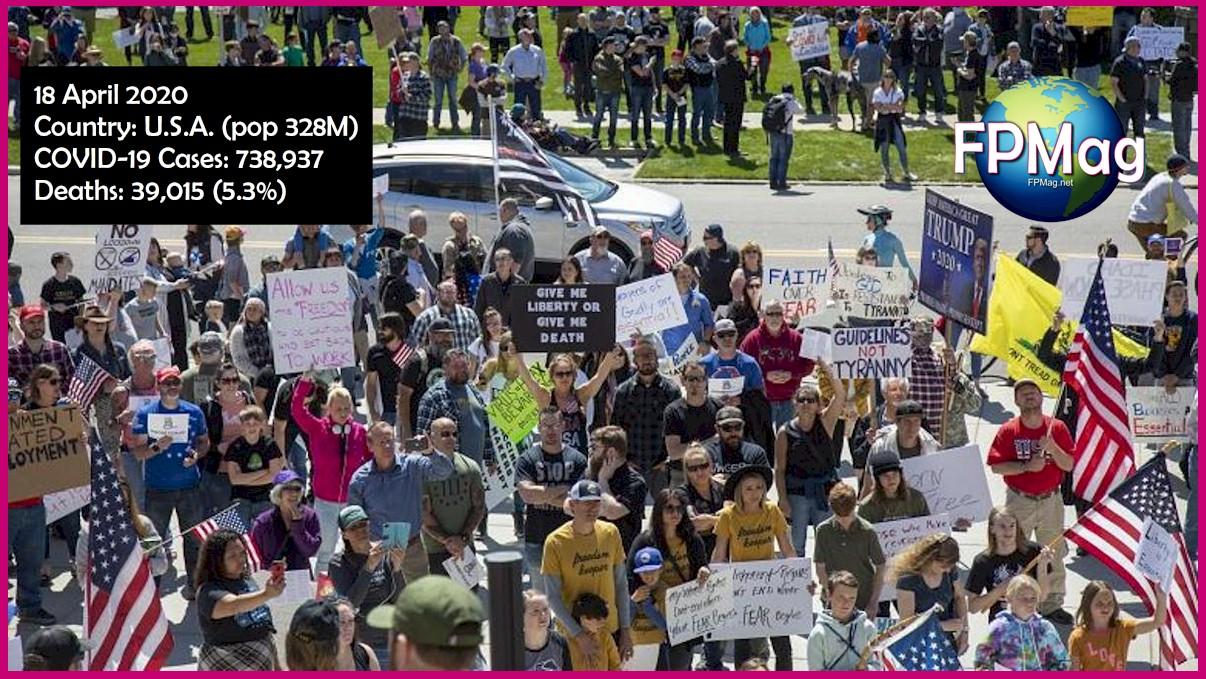 Analysis: Why do Americans behave this way?

The United States has a negative population growth.  It has an enormous obesity problem with some States hitting 85% obesity. Contrastingly, the ideal celebrity profile pushed by Hollywood, by television commercials, and by the general media is quite sylphlike.

Billions of dollars are spent every year on advertising telling Americans they are not up to standard and that to keep up they need to buy the bigger, better, faster models and look like THIS.

“This” is unattainable but people will spend their wallets dry trying to get there.

Contemporary social high-bar paradigms based on class, wealth and personal appearance are isolating masses of people into socially dysfunctional classes of havenots.

About 40 million Americans live well below the poverty level, so they are very much in to the ‘havenot‘ class. But unfortunately it seems that most of the so-called middle class is now forming the low-income class, just above the poverty class. They are the working poor. 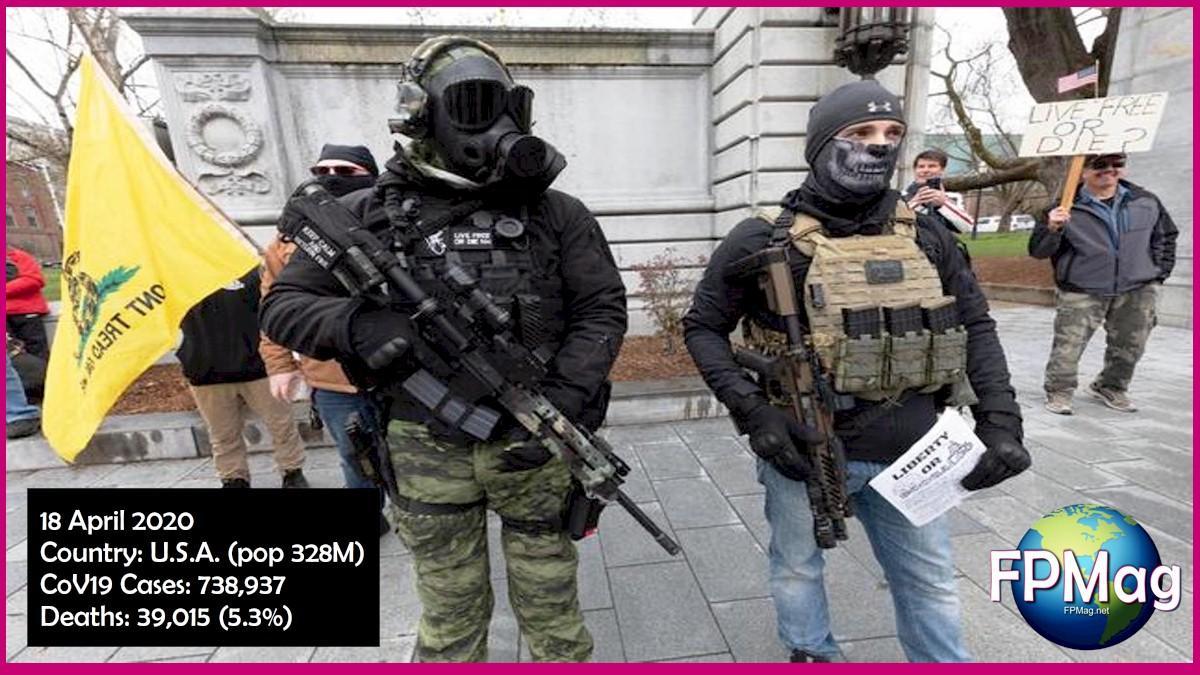 They are likely to support right-wing populist cults led by extremist, combative leaders, like Adolf Hitler for example.

They already are disenfranchised by a society that sets the bar far too high for most communities to attain. This disenfranchisement breeds anger and dissent.

As such these individuals  can be manipulated with hate for ethnicities, religion or political affiliations as a way of leveraging individuals’ feelings of “not belonging”.

In order to obtain the desired mass behaviour of these targets, like votes, attending rallies and carrying out protests, intellectually dishonest and weak politicians try to exploit individuals by promising or teasing with increased feelings of self-esteem. 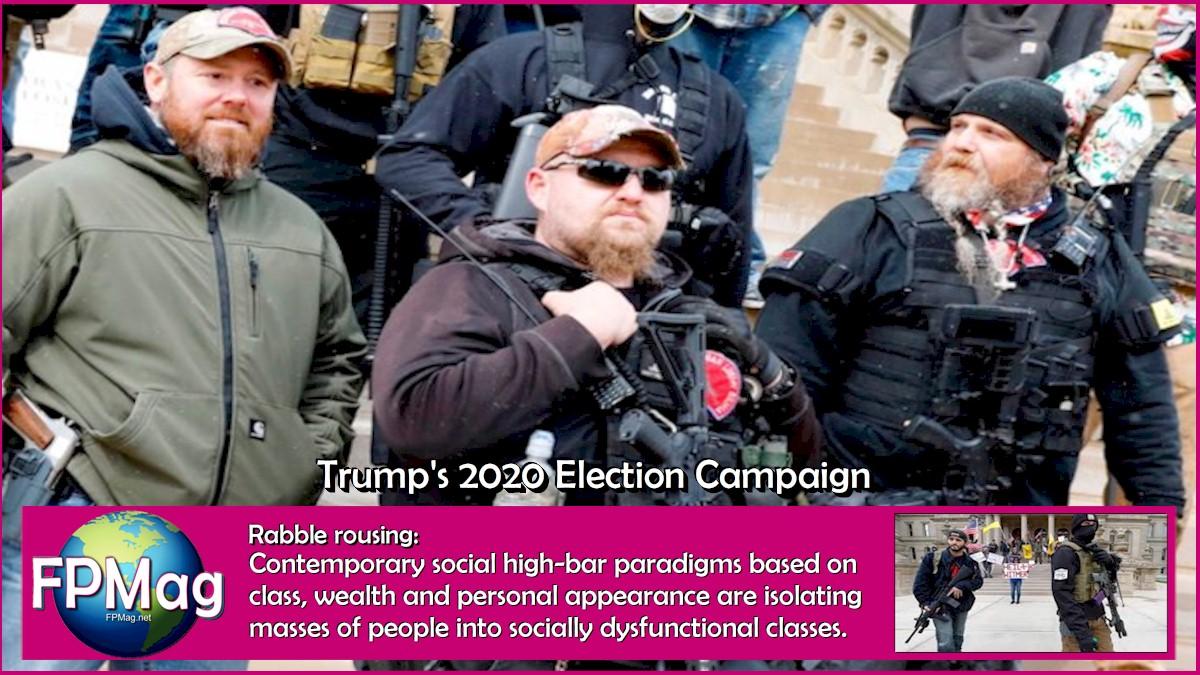 Then there is the Modernization Losers thesis.

In a theory attributed to academic Hans-Georg Betz, individuals support far-right political cults because they wish to undo changes associated with modernisation.

These people revolt at mere mention of climate change mitigation; renewable energy sources as alternatives to fossil fuel burning, including, yes, Trump’s most maligned device, the simple windmill which has been around since the Persians first used them to pump water in A.D. 500-900 and by the Chinese in A.D. 1200. But Trump thinks windmills are the polluters. He mocks them as such and mocks China and Germany for manufacturing windmills.

Many pundits, including British media mogul Conrad Black are convinced Trump will win the 2020 Reelection

Putting it all together, personality disordered trust-thieves can do very well as politicians. They have no moral boundaries that most people adhere to, those persons with a conscience.

Under the current circumstances, as America plunges into a social failure abyss, Donald Trump will likely win the next election.

All Trump needs to do is drag the population down deeper into hell, and blame China, the United Nations (incl. WHO), and the Democrats including Obama... And that certainly is where America is headed, right now.

The writing is on the wall. The big question is: “which parts of the rest of the world will see the writing and adjust their alliances and dependencies in sufficient time to avoid going down with the sinking ship, America?”