Listening to Dr. Tedros who in a manner of speaking was defending himself for being a black African from personal attacks driven by the US White House was a grim reminder of how hitler worked. COVID-19 has brought out the worst in the worst people.

The Trump White House has turned many Americans into something that is more despised than the SARS2 virus itself, a cult of racists.

Respect & love these heroes & their kind for extraordinary leadership, by FPMag Authors

What happened in China has never happened before. The worst nightmare arrived. It erupted from a failing, overstressed, mammal species. More mammals will fail and more pathogens will erupt from their demise unless humans stop climate change on its course to morbid imbalances.

SARS-CoV-2 is spreading in microbial numbers like what nobody has ever counted except in attempts to quantify the number of stars in the sky.

The unexpected nightmare is a highly infectious deadly respiratory disease, a disorder of all our structures that spreads from asymptomatic person to person and kills our best and most learned doctors and professors in their wisest times, their senior years.

It stalks the human race now, having once lived dormant in bats. But now that bats have sickness caused by temperature increases and climate change, the virus has found a new species and it is no longer dormant but vividly active.

It doesn’t intend to kill the human race, it’s only will is to survive and reproduce in a targeted googleplex quantum—ten to the power of infinity numbers of .3 micron lipid shells filled with creepy RNA and some worse DNA.

Human immune systems tend to go bonkers when anything tries to change cell DNA. The outcome is a systemic panic. The panic includes clogging of lungs with flood debris; the flooding of nasal passages wherein about 5% of cases the beast gets delayed in the anteroom of its target in the lower lungs. SARS-COV-2 seems uninterested in the breadcrumb path of the upper respiratory system. Inflammation spreads across the bottom of both lungs equally within in an unfettered cytokines storm.

Mankind with its irresponsible pollution of all of Earth is responsible for the imbalances that caused the excited exit from dormancy of SARS-CoV-2,

Abiding annoying textbook definitions his bureaucracy gave him, Dr. Tedros, the new guy, delayed the renaming of a series of epidemics a ‘pandemic’ while at the same time warning the world that it was just a word of questionable meaning and that the world needed to prepare for COVID-19. That was the focus.

China did not know what hit its Hubei province but after local politicians who feared the career axe let the cat out of the bag, Xi Jinping took personal control and with hands-on brilliant management led his people from the hell created by what he saw was “evil”.

Xi Jinping left no stone unturned and pulled the massive power of all China to the fight against “The Beast“. 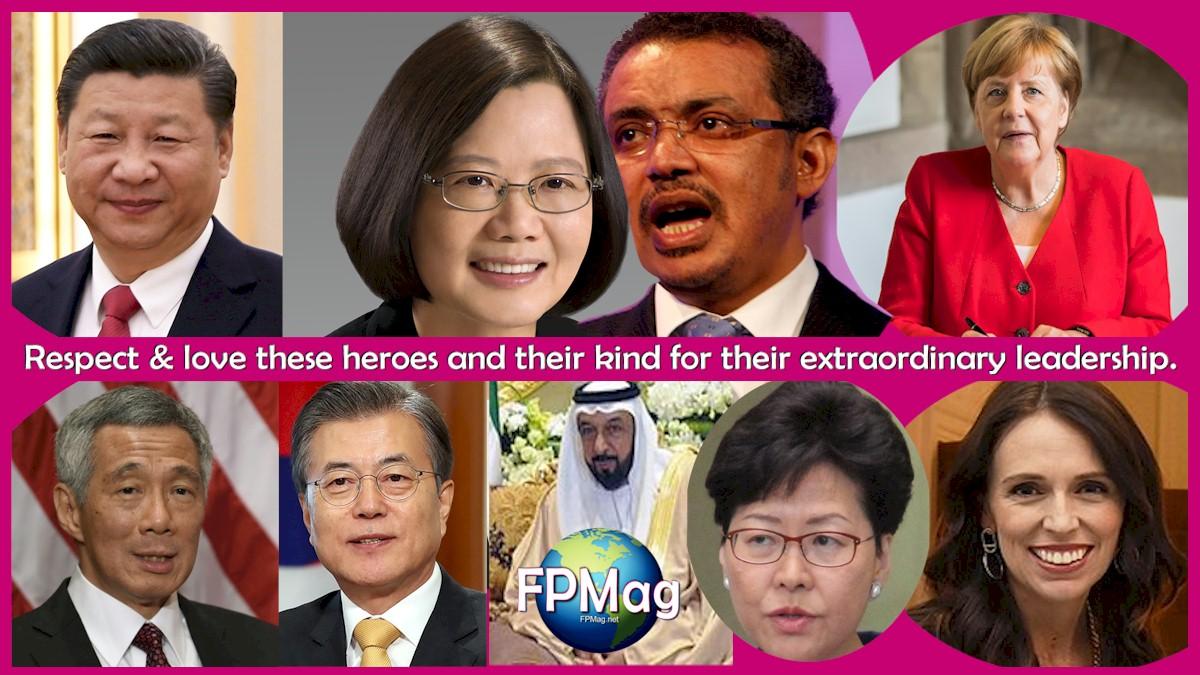 The picture and it’s simple story:

And then there’s a lone American who has dared to speak the truth in a cave full of vicious virus-spitting bats. Thank you Dr. Anthony Fauci from a grateful world that, by consensus, loves you apart from those you stand beside.

Deeply loved for over 40 years, American Doctor Anthony Fauci, with the bedside manner of a saint, is director of the US National Institute of Allergy and Infectious Diseases. He has travelled the globe helping the world try to solve HIV/AIDS and other problems. 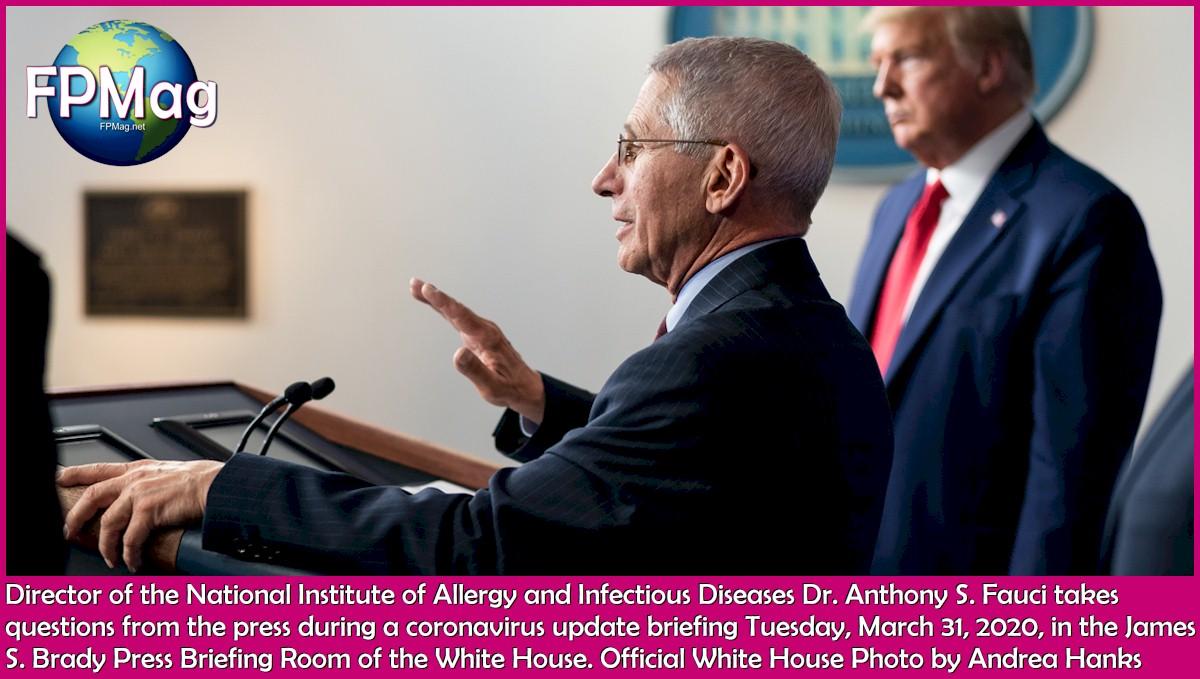 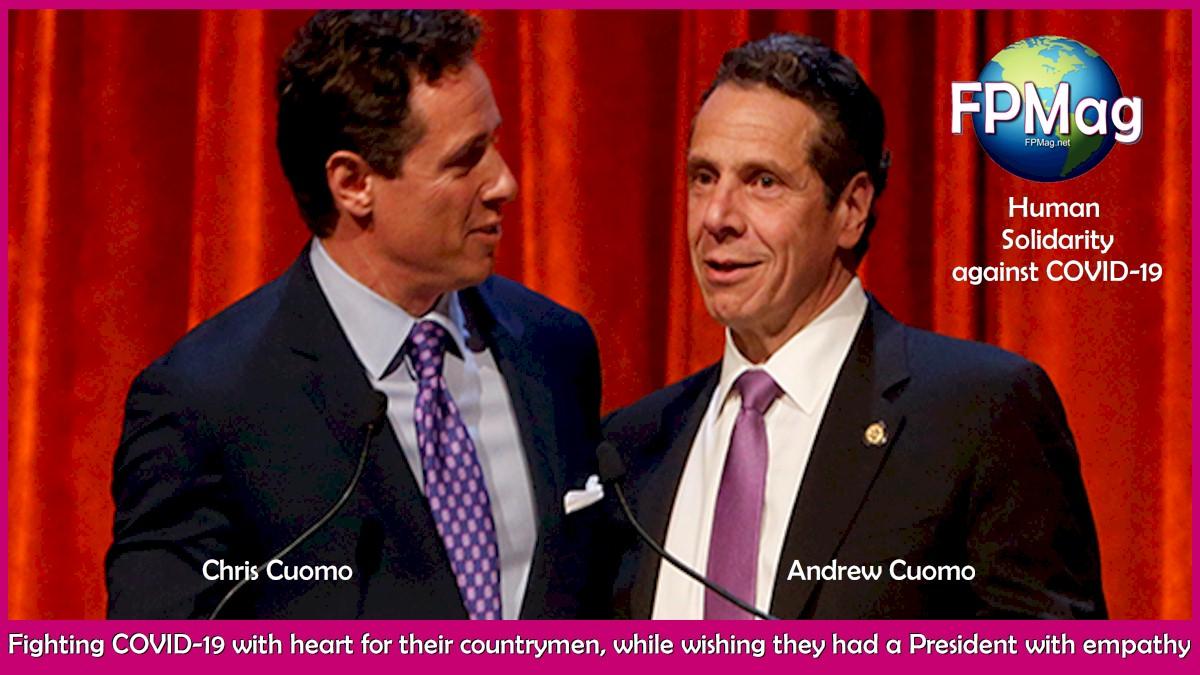 We wish Governor Cuomo a good outcome for his people and a healthy outcome for Chris’s fight against serious affliction of COVID-19. Thank you for your human solidarity against COVID-19 — Two amazing brothers fighting COVID-19 with heart for their countrymen, while wishing they had a President with empathy. Photo by Jason DeCrow—Photo Art/Cropping/Enhancement: Rosa Yamamoto FPMag

Sometimes it is wise to copy greatness.

Xi Jinping proved the concept of test, treat, trace. It was close to being a slam dunk.

He turned the immense following of the China Communist Party into a contact tracing mega-movement and put many millions of contacts on a health watch and quarantine. Like it or not, local CPP apparatchiks were welding doors closed of those persons who violated curfew, their meals passed through barely open windows. (In the Philippines the wacko Duterte is murdering starving curfew breachers unable to find food who spoke out against his failures.)

Meanwhile Xi Jinping’s campaign against CoVID-19 paid substantial dividends to informants who spotted and reported possible infected persons yet unknown. Those persons were treated firmly and helpfully by a benevolent quasi-dictator.  People were treated to free health care with dignity and respect for their own good without much explanation, freed from the deadly grip of COVID-19. They were given their lives. Many obstinate infected contacts were arrested and taken to hospital if at first they resisted. The survivors today are thankful to what amounts to a bullish, fatherly approach that wasted no time in delivering help to the seriously ill.

Xi Jinping is a hero despite any and all steps his learning experience might have tripped up.

Dr. Tedros Adhanom Ghebreyesus is another hero who has preached test, treat, trace like a doctrine for the living because it is a doctrine for the living in the fight against COVID-19. Tedros has been a beacon of stalwartness to the world against COVID-19 despite US President Donald Trump’s abusive disregard for huge communities of people whose nations have a weak health care system and thus rely on WHO.

Trump berates and disrespects Dr. Tedros in an effort to to divert attention away from his own extreme disregard for the safety of Americans in the face of a nightmarish disease Trump was warned about last year.

The failed American leadership claims the USA will not pay its fees to the World Health Organization because Donald Trump says Tedros is at fault for the Trump Administration’s failure to care for Americans. Trump says he has no responsibility for doing that. It’s all the responsibility of the individual US States, he says. Meanwhile he says 100,000 Americans are about to die without batting an eye.

China succeeded and shared the genome for COVID-19 on 7 January  2020 after pneumonia of unknown etiology killed wild-life merchants in several countries, finally landing in Wuhan.

It’s true that it was hard to belive in China that this was happening. It sounded like an impossible nightmare.

For reasons yet to be completely understood, Xi Jinping put on surgical gloves and a mask and with hands-on at every step, at Wuhan street level, he led the fight against COVID-19.

Every day that FPMag had a question for China as the publication partnered with medical groups to provide a civil society public service, the question was generously answered by the Chinese National Health and Health Commission. If Donald Trump really didn’t belief his own intelligence experts, he could have read Feminine-Perspective Magazine.

Note: China kept no secrets until it came under brutal attack this month. It has been made an enemy of Trump’s Cult by Trump from his bully pulpit daily COVID-19 briefings athat are no more than political rallies. That danger caused everything to change for America. China get’s along famously with the rest of the world and inclusive of America China has offered generous medical assistance in fighting COVID-19, an offer over 100 countries have accepted.

The methods for success in China were somewhat draconian but they worked to save lives. Nobody in the world is in a position to tell a country the size and age of CHina how to govern itself. It’s doing very well regardless.

In the case of the COVID-19 epidemic in China, sometimes the patient was nearly dragged to the hospital, to save their lives. A quick straw poll suggests many families have had rto do something like that at one time or another.

At times, the infected stubbornly disbelieved the worst. Xi Jinping’s biggest issue was people who couldn’t believe it was happening. Many of those became corpses authorities had to remove from their homes. Their passing wasn’t in vain. Thousands of pneumonia deaths of unknown etiology told the world this is real.

The lesson: In a war, those who need to be enjoined get hustled into the fight against the enemy without a choice.

The 40th Prime Minister of New Zealand, the extraordinary Jacinda Kate Laurell Ardern copied Xi Jinping core idea and followed Dr. Tedros doctrine to the ‘T’ with her own value-added NZ-specific tactics. The result has been a miraculous reprieve from COVID-19 for the people of New Zealand. A stunning success against ‘The Beast’.

The ever-strong and super intelligent Angela Merkel has done for Germany an even bigger job of war-fighting SARS-CoV-2 against massive odds by refining the lessons from China and leveraging the assets of one of the best healthcare systems in the world.

Tsai Ing-wen, President of Taiwan is owed a seat at the WHO‘s table. Likely the best outcome on Earth against COVID-19 belongs to her exclusively. It doesn’t matter that she followed XI Jinping’s core tactics, it takes even bigger greatness to acknowledge and copy what a ‘frenemy‘ has done that has worked.  Tsai Ing-wen took it to the next level and saved Taiwan, almost completely.

Moon Jae-in has a heart of gold, pure gold. This brilliant humanitarian Korean leader taught the world how to fully implement test, treat and trace early and do it with a compassionate love for his people, in much the same manner as did Xi Jinping care for the Chinese people. The outcome for the densely populated South Korea puts Washington DC to absolute shame.

This fight is still on and it will continue forever in one form or another. There will be more SARS2 until we figure out its achilles heel and force it back into dormancy or quash it altogether.

Ebola is till around in even worse forms than we have seen thus far.

The WHO‘s brain dead overzealous supercilious mask-shamers and others who have shamed and blamed Asians because they wear their masks through the crisis, as they have warn their frickin masks since SARS1 seventeen years ago, are as reprehensible as the American Trump-Cult loonies who attack Dr. Tedros and call him racist names.

Trump set that racist fire alight in just the same way inadequate losers who use wrongdoings to get ahead have done across history.

It will never be the same after Trump brought his cult of trailer park fall-downs Canadians led by Mike Clattenburg once ridiculed endlessly without realizing the TV/Movie-series that sold like hot dogs in the USA was the worst of America that became America—stupid thugs.

Today America is Trump and the echoes of every Trump bleat from the bully pulpit are reverberating across social media and on Fox News like PeeWee Herman trying to convince humankind that the world is flat not round.

Donald John Trump is everything Bandy X. Lee promised he would be.