Do not bathe in ultraviolet light or chlorine. Debunking Trump.

In this video you will see Dr. Deborah Leah Birx cringing as Donald Trump suggests Americans might be drinking bleach or lazed internally with ultraviolet light.

“I see the disinfectant where it knocks it out in a minute, one minute,” said Trump. “Is there a way we can do something like that, by injection inside or almost a cleaning? Because you see it gets in the lungs, and it does a tremendous number on the lungs, so it’d be interesting to check that.”

by one very angry health care professional Sharon Santiago
“We have treated persons who have misapplied toxic chemicals as a prevention of COVID-19. Any bar of soap that causes foaming is all you need for personal hygiene, plus a clean toothbrush and clean water.”

Dear children: When this man appears on the TV, change the channel or leave the room. 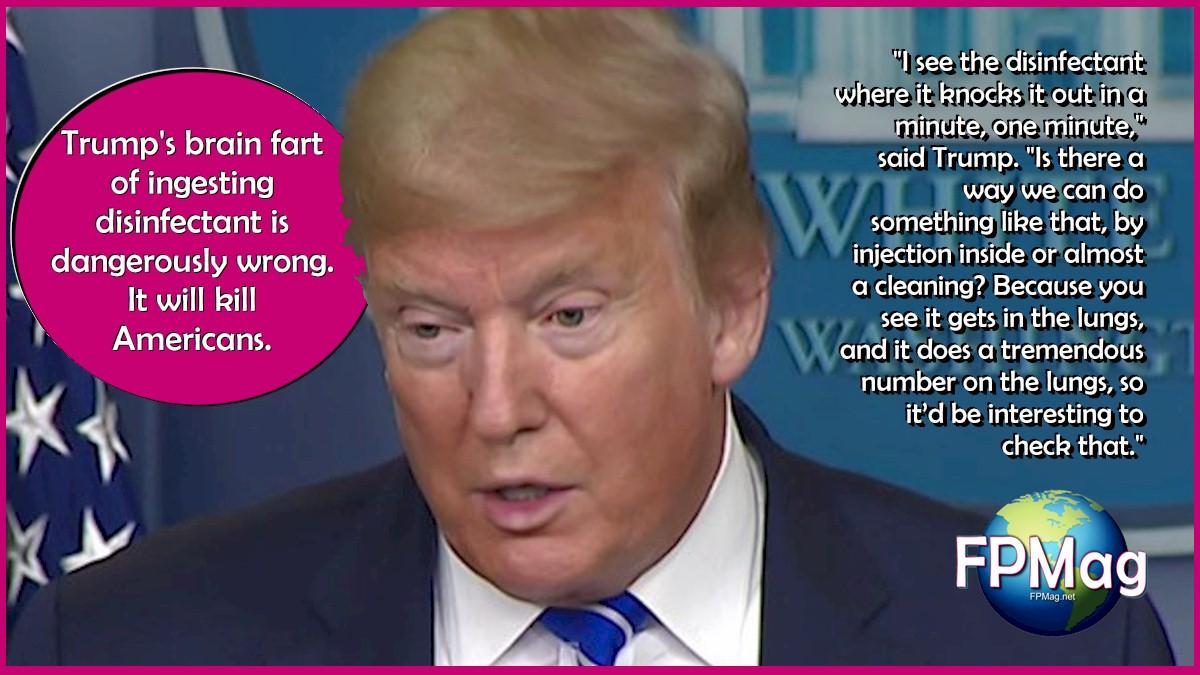 Hopefully FPMag has your attention. Please consult a parent, nurse or a doctor for your health care advice and do not pay any attention to politicians.

Current COVID-19 Statistics for the USA

Dr. Birx is an American physician and diplomat who is known to RINJ Foundation Rape Clinic workers (RSAC) who specialize in HIV/AIDS immunology, vaccine research, and global health.

Some persons say on social media platforms that her face in this video segment looks as if she just followed Trump’s advice, to ingest bleach or lysol.

“That is not true. If she had done what Trump had suggested she would be on the floor gasping and drooling away her last slivers of life energy,” says Michele Francis, a senior administrator and nurse practitioner with The Nurses Without Borders.

The United States President Trump: “Supposing you brought the light inside of the body, which you could do either through the skin or in some other way,” Trump said. “The whole concept of the light, the way it kills it in one minute. That’s, uh, that’s pretty powerful,” says US President Donald Trump.

The maker of Lysol: “As with all products, our disinfectant and hygiene products should only be used as intended and in line with usage guidelines. Please read the label and safety information.”

Wear a fit-tested N95 Mask to Protect Yourself and Others

“The more people wearing properly fitting N95 respirators, the fewer people we will meet in the emergency room,” says Karinna Angeles, an urgent care nurse in the Philippines.

Here is how to don and doff your N95 respirator mask, especially when you have been in high risk areas. Most commonly used for Influenza prevention, these masks are effective according to the CDC in helping to prevent the spread of Flu, swine flu and avian flu transmission from person to person.

N95 masks are designed to fit over the nose and mouth of the wearer, and properly fitted can provide excellent protection for you and from you.

Wash your hands for at least 20 seconds in a good soap  before and after touching your mask. Using a hand sanitizer is an acceptable alternative if done correctly.

You don’t need the Most Expensive N95 Models