China updates COVID-19 tracking. Every number has a face.

“It is a significant change,” says Fred Harris who leads the team of researches compiling data for FPMag and its partners, published here, 6 times per day or more.

“We believe that in the frantic scene that followed the building of two large prefabricated modular hospitals in Wuhan, there was chaos.

“It certainly appeared that way,” he added, ” at the time, although the officials we talked to were steady in reporting on time, plus or minus five hours, the data they had, may have been collected from scanty reports,” noted Mr. Harris.

When asked about the credibility of the numbers, the data scientist was reluctant to comment, saying that “I still don’t believe even the National Health Commission knows the true picture in the same way Italy, Spain, America appear to be confounded by the massive and terrifying numbers. Everyone is simply doing the best they can do. We watch every single case come through our computers and there is only one thing I can say, it is the saddest thing any of us have ever seen. That’s all,” he added sadly. 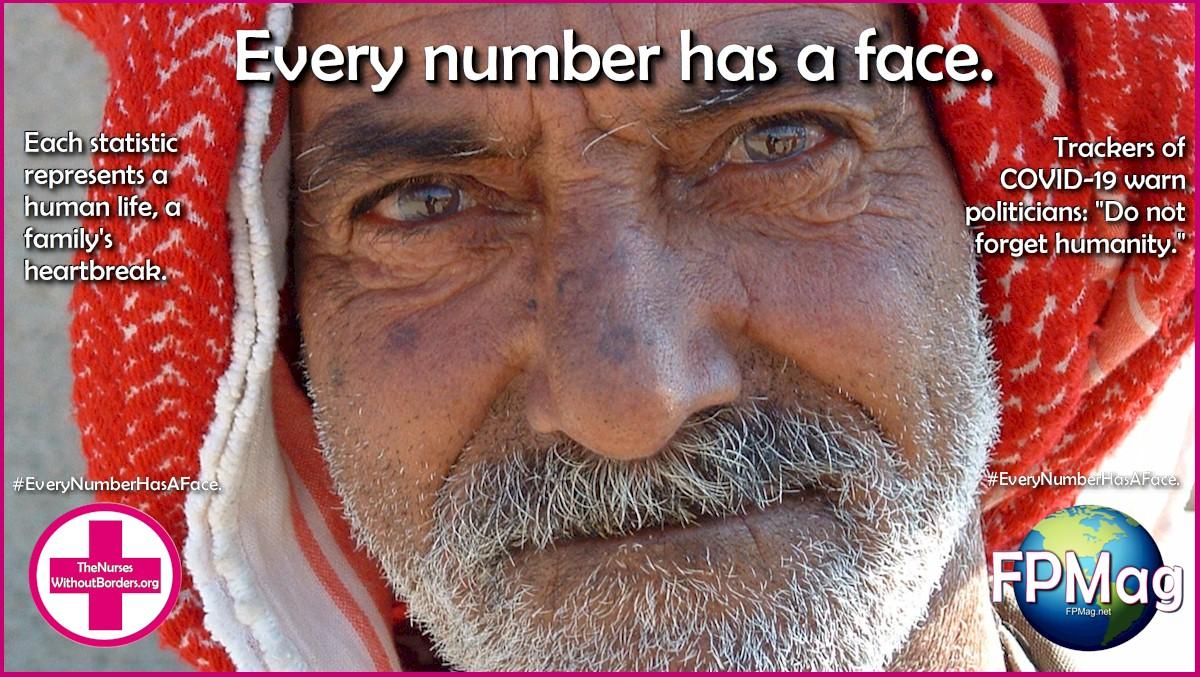 The picture and its story: Every number has a face. “Politicians need to show respect when they flop their jaws about deaths in China, like President Macron in France who claims to be Europe’s bridge to the White House, ” says nurse Qin in Wuhan who still has lesions on her face from wearing PPE day in and day out for many weeks.

“These politicians who are supposed to be running governments [translated]  that protect the people need to show respect to the dead and if they don’t their families will take to the streets in hundreds of millions in protest in the coming months and years,” she thoughtfully added with some considerable emotion.

In this photograph is Iraqi militiaman captured in digital format forever protecting the Sabaa Nissan water treatment plant in Baghdad.

According to photographer Christian Briggs, “I managed to snap a couple of photos of this lovely old gentleman while I was touring Sabaa Nissan… The photo is amazingly detailed; you can see every separate hair on his face and my reflection in his bright eyes. I didn’t get his name unfortunately because I couldn’t speak enough Arabic and he had a quiet demeanor.”

Every number has a face. 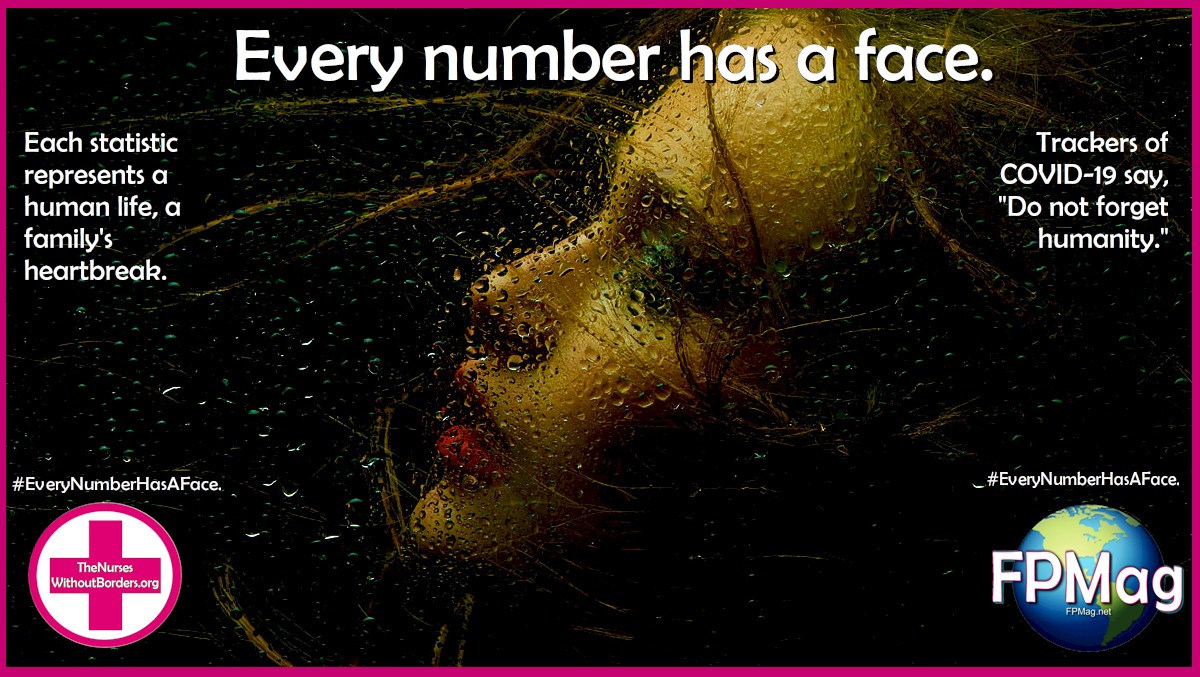 Every number has a face.
Photo Art/Cropping/Enhancement: Rosa Yamamoto FPMag

This morning the Wuhan newly constructed  ‘Coronary Pneumonia Epidemic Prevention and Control Headquarters’ notified the National Health Commission of the People’s Republic of China the official revised situation in Wuhan.

This has been expected for a few weeks by data systems managers who regularly speak to their counterparts in Beijing.

The number of confirmed cases and deaths of the confirmed cases now includes those persons who sadly died at home at the outset of the outbreak which are attributable to the SARS-COV-2 disease.

“The new report includes some data that was not reported by hospitals,” notes Dr. Anderson of The RINJ Foundation.

“Nor was it indicated on death certificates in many cases despite obvious indicators like ground glass opacities on both longs accompanied by swollen heart and other indicators that typically, (now better known) are indicators of the COVID-19 disease. That was not well known in the early days,” the doctor explained.

“Recently, New York City revised its death numbers by several thousands, concluding as China has done that, some cases were not counted as COVID-19 deaths because there was no medical record of a test,” noted Dr. Anderson.

When asked for comment, NWOB-nurse Sara Qin in Wuhan responded by email to say that, “at times we lost the identification of some cadavers, things were so chaotic with no time to do anything and people blinded by steam inside their goggles and pain from the contusions and lacerations the devices were causing. Some nurses had bleeding into their eyes. We cannot justly be blamed.”

No country knows the full extent of the deaths.

British and European officials trying to curry favour with the Trump administration in the United States, (dubbed “The Rat Pact” in some diplomatic circles)  have attacked China’s news release but according to statisticians, “they are hypocrites because their nations’ numbers are equally suspect.”

Mr. Harris explained that the difference between the “2.2 million cases reported by countries is really something like 40 million cases including the minor to no symptom infections.”

“The data algorithm for that calculation comes from the intensive testing in China, South Korea and some other investigations and interviews with hundreds of women medical professionals to which hour organisation has easy access,” he added.

“We have anecdotal reports of people walking through shanty towns smelling death in every alley of very many cities including some in China. Those are places where there is no public health and the entire family has died,” says the computer scientist.

Infections each country reported based on clinical diagnostics and RT-PCR tests for COVID-19.

In the United Kingdom one of the foremost epidemiologists Dr. Neil Ferguson of the Imperial College has said that models from the outset estimated global infections as high as 600 million. 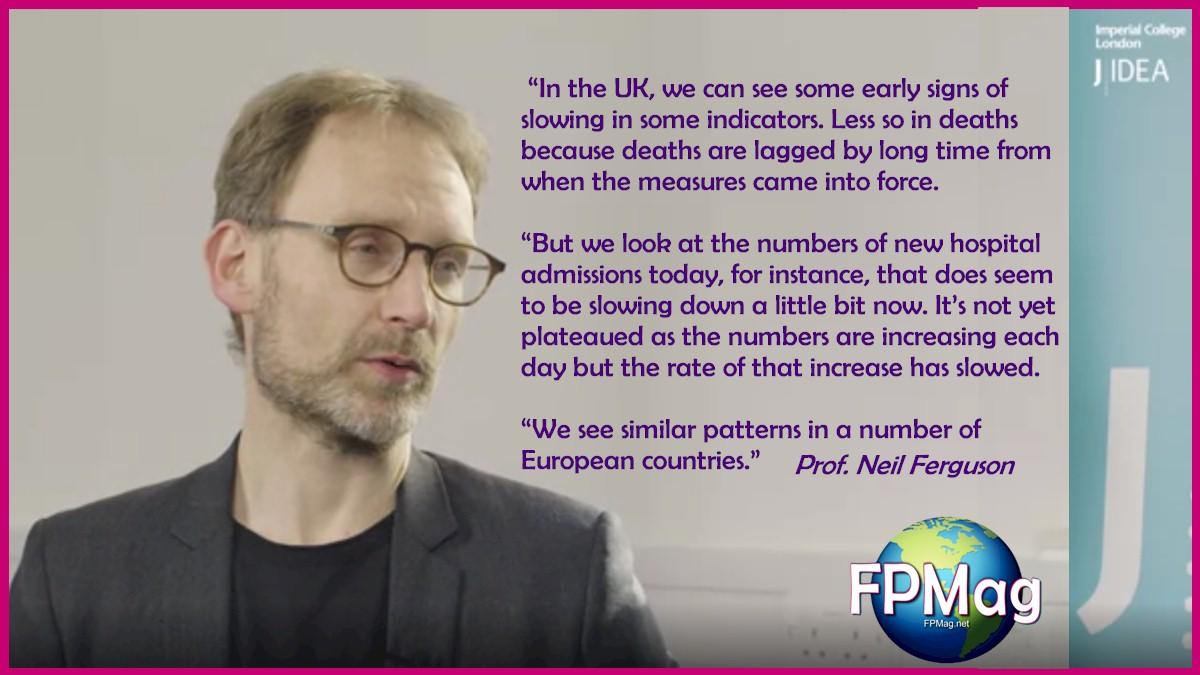 Additionally the Imperial College has publicly informed the UK government that:

From 0 to 24:00 on April 16, 31 provinces (autonomous regions and municipalities) and Xinjiang Production and Construction Corps reported 26 newly confirmed cases, of which 15 were imported cases and 11 were local cases (5 cases in Guangdong, 3 in Heilongjiang) Cases, 2 cases in Shandong, 1 case in Liaoning); no new deaths; 3 new suspected cases, all of which are local suspected cases (2 cases in Heilongjiang, 1 case in Inner Mongolia).

On the same day, 52 newly discharged cases were cured, 412 close contacts were released from medical observation, and 6 severe cases were reduced.

There are 879 confirmed cases imported overseas (including 45 severe cases) and 57 suspected cases. A total of 1549 cases were diagnosed, and a total of 670 cases were discharged, with no deaths.

As of 24:00 on April 16, according to reports from 31 provinces (autonomous regions and municipalities) and the Xinjiang Production and Construction Corps, there were 1081 confirmed cases (including 89 severe cases), 77,944 cases were discharged, and 3342 deaths were accumulated. A total of 82,367 confirmed cases were reported, and 62 suspected cases are currently available. A total of 722,909 close contacts were tracked, and 8,970 close contacts were still under medical observation.

“We watch every single case come through our computers and there is only one thing I can say, it is the saddest thing any of us have ever seen. That’s all.” 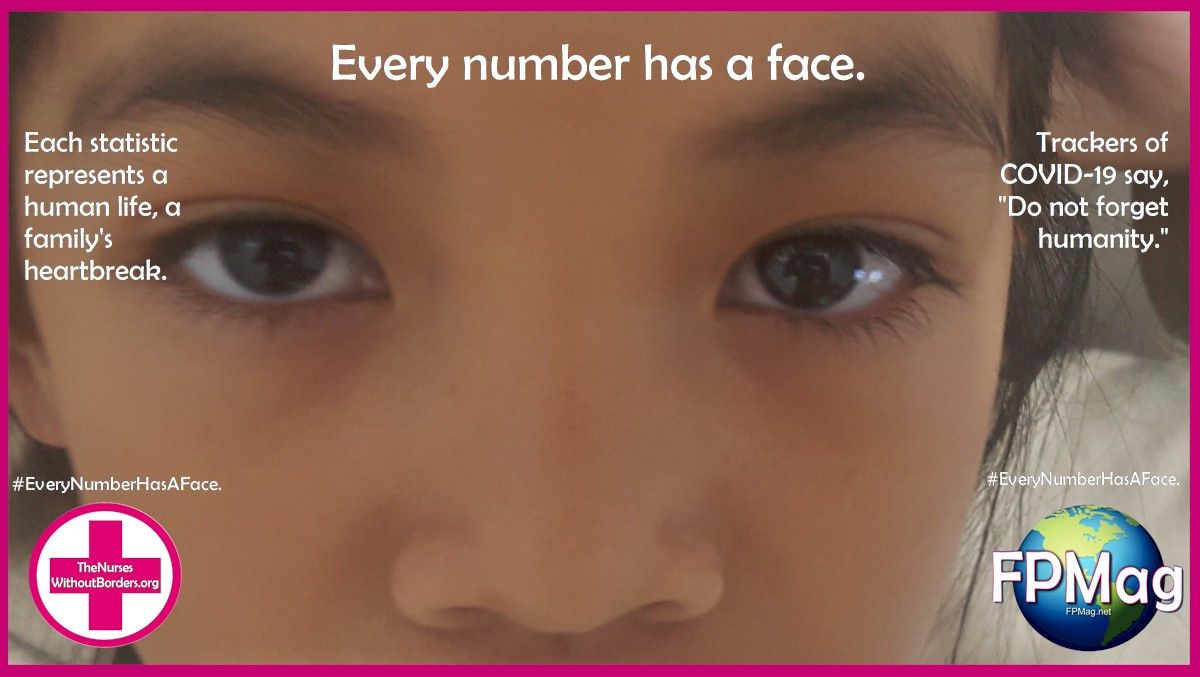 Every Number Has A Face Photo Art/Cropping/Enhancement: Rosa Yamamoto FPMag

On the same day, the person in charge of the Wuhan New Coronary Pneumonia Epidemic Prevention and Control Command accepted an interview with reporters and answered relevant questions.

1. Why should China correct the number of confirmed cases and deaths of newly diagnosed pneumonia in Wuhan?

A: The New Coronary Pneumonia epidemic is a major public health emergency that has occurred in China since the founding of New China.

It has the fastest spread, the widest scope of infection, and the most difficult prevention and control.

As the main battlefield for the decisive battle of national epidemic prevention and control, Wuhan City, under the strong leadership of the Party Central Committee and the State Council,
and under the specific command of the Hubei Provincial Party Committee and Provincial Government, has adopted the most comprehensive, strict and thorough prevention and control measures.

It has been basically blocked, and the control of the Lihan Channel has been lifted, which has created favorable conditions for comprehensive and detailed review and revision of the epidemic situation data.

Information on epidemic situations involving diagnosis and death should be reported in a timely manner and published in an open, transparent, and realistic manner. In the early stage of the epidemic, due to the phenomenon that medical staff were busy in rescue, nucleic acid detection and inadequate capacity to treat patients, a few medical institutions failed to connect with the disease prevention and control information system, and there was also an incomplete public health statistical system, resulting in late registration and leakage of some cases Registration, mistaken registration.

According to Article 38, Paragraph 4 of the Law of the People’s Republic of China on the Prevention and Control of Infectious Diseases, Publicity information should be timely and accurate, and

Article 19 of the” Regulations on the Implementation of the Statistics Law of the People’s Republic of China “In case of incomplete statistical data or obvious errors, the statistical investigation object shall be supplemented or corrected according to law “,” Registration of Population Death Information Management “Regulation (Trial)”

2. How does the revision of the number of newly diagnosed cases of new coronary pneumonia and the number of deaths of confirmed cases in Wuhan be carried out?

A: The Municipal Epidemic Prevention and Control Command attaches great importance to the correction of the number of confirmed cases and deaths of new cases of pneumonitis.

Based on the principle of being responsible for history, the people, and the deceased, it insists on seeking truth from facts and actively making corrections.

In late March 2020, an epidemic-related big data and epidemiological
investigation team was set up to recruit special personnel from the municipal health, disease control, public security, civil affairs, judicial, and statistical departments to form special classes to make full use of the city’s epidemic prevention.

In accordance with the requirements of full coverage and no omissions, all data of all epidemic-related locations are collected, including hot clinics, hospitals, shelters, isolation points, epidemic-affected communities,
and prisons and pension institutions under the jurisdiction of public security, judicial, civil affairs and other departments.

In special places, all personal information of all cases is collected,
and each person is checked and checked through medical institutions, street communities, grassroots police stations, patients’ units and family members to ensure that each case is accurate and each data is objective and true.

3. What are the changes in the data after the correction of the number of confirmed cases of new coronary pneumonia in Wuhan?

A: As of 24:00 on April 16th, the original announced that the city’s confirmed cases are 50008 cases, because some patients have been across districts and visited multiple hospitals, resulting in the reduction of 217 cases of repeated card registrations; missed reports due to late reports The 542 cases of past cases that have not been announced in time should be increased, and the actual cumulative confirmed cases should be revised to 50333 cases.

4. After the number of deaths of newly diagnosed cases of new coronary pneumonia in Wuhan is revised, what changes have occurred in the data?

Answer: As of 24:00 on April 16th, the original announced that there were 2579 confirmed deaths in our city. Among them, 164 cases of confirmed cases with repeated card registrations and other cases that are not new coronary pneumonia should be reduced; deaths without hospitalization cannot be reported for disease control A total of 1454 confirmed cases of information systems and some medical institutions that reported late or missed reports should be added. The actual cumulative number of diagnosed cases should be revised to 3869.

5. What is the significance of correcting the number of confirmed cases and deaths of new cases of pneumonia in Wuhan?

Answer: Life safety and good health are the most basic needs and the most common wishes of the people. Behind the epidemic situation data are the lives and health of the people, and the credibility of the government. Correcting the number of confirmed cases and deaths of new cases of pneumonia in a timely manner is not only conducive to safeguarding the rights of the people, scientific decision-making for epidemic prevention and control, but also a response to social concerns and respect for every life.

According to the summary statistics of the revised epidemic situation data in Wuhan, as of 24:00 on April 16,

Hubei Province had a total of 68,128 confirmed cases, 4512 deaths, and 63487 discharges; 31 provinces (autonomous regions and municipalities) and Xinjiang production and construction

FPMag waited until 16:38 Beijing time to get a confirmation of these significant changes. They are confirmed by the National Health Commission of the People’s Republic of China. We report verbatim from translations.