That’s what a dramatic lawyer in Sweden, Elizabeth Massi Fritz, is saying about the arrest of Julian Assange who does not have pending charges in Sweden for any sexual misconduct. Swedish authorities at one time wanted to speak with Assange about a broken condom. That’s about it until Assange on 15 August 2010 announced another release of ‘secret’ documents, this time implicating the USA in mass murder of civilians in Iraq, as if that was a secret.

One of two major outrages was spelled out by Julian Assange’s lawyer, Jennifer Robinson, who said Assange’s legal team would be fighting the extradition request. She said it set a “dangerous precedent” where any journalist could face US charges for “publishing truthful information about the United States”.

The other disgust is America’s extradition hoax in Sweden. The US and Sweden made a feeble attempt to exploit women while further tainting jury pools on an issue that normally impacts children and very young persons. Rape.

by Micheal John Feminine-Perspective Magazine with files from Melissa Hemingway 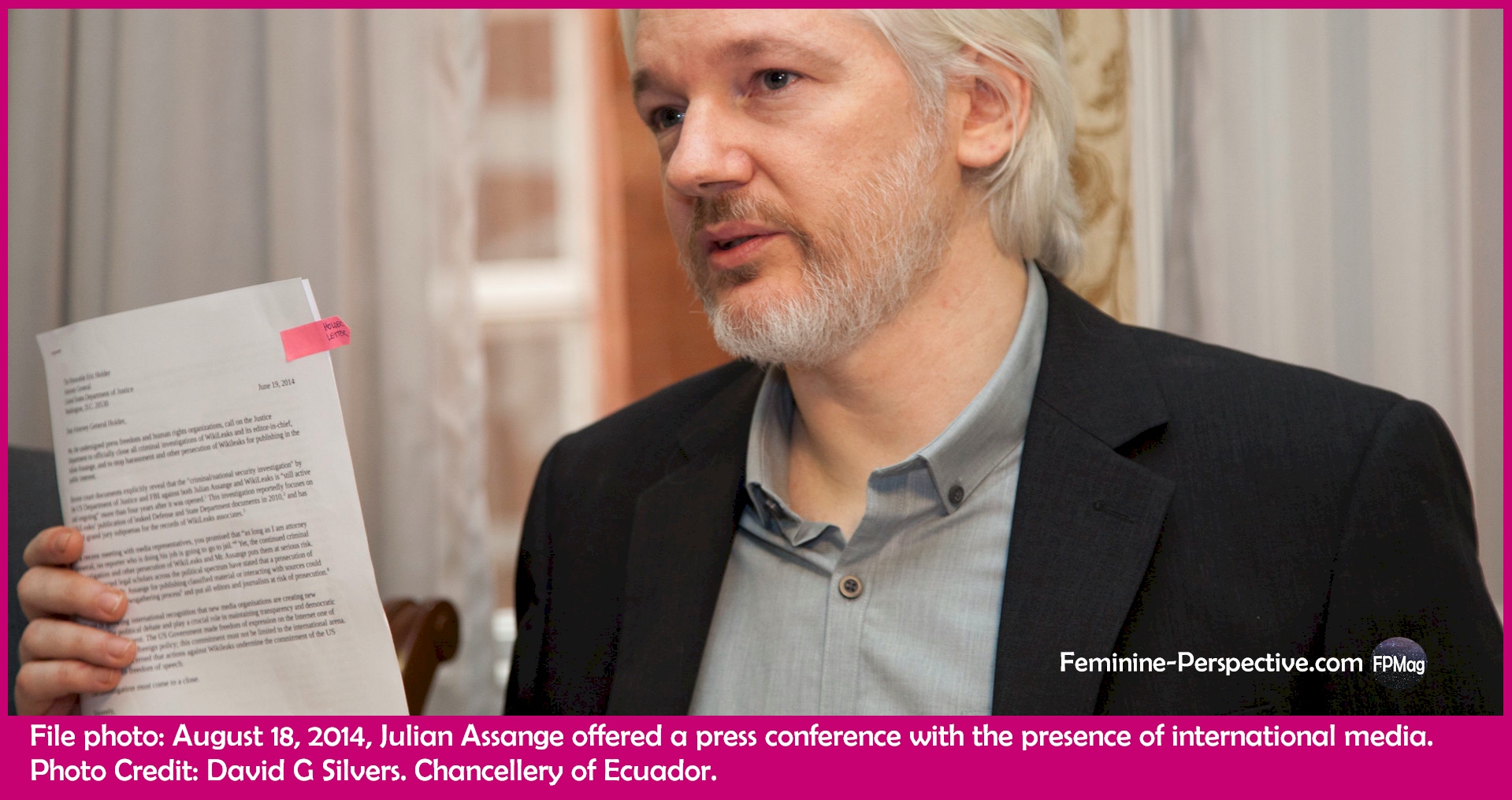 Journalist Julian Assange had already broken several stories about American misconduct in Afghanistan, like evidence of pre-meditated civilian murders. The evidence of crimes is so bad in fact that Assange became public enemy number one to some Americans.

One thing a journalist cannot do is criticise American troops. Since the war crimes of America in Vietnam were exposed by free-wheeling journalists, America uses its money, guns and bombs to control where journalists can go in war zones. True stories are never told. Julian Assange broke the USA rules on war coverage and reported some horrifying facts. The world has not been the same place since then.

No Sex Crime was Committed. No Charges were laid. Here’s why.

Before anyone can say that a crime has been committed, a finder of fact, having heard both sides of the events, those of the accused and the accuser, must find that a crime was committed. In Sweden with respect to Mr. Assange, that has not come anywhere near happening.

In 2010 while at a speaking engagement, Assange and two lady friends have said that they severally had consensual sex. Assange had these encounters in August 2010 with at least two women during his stay as a guest at the home of one of these women.

In one session where he and his speaking engagement organizer slept together, both parties later said that the condom he had used, broke.

By the next week, Assange was on his way to publish thousands more WikiLeaks to the detriment of US war criminals. Probably that set some changes in motion.

“After delivering a 32-week premature baby for a nine-year-old who has clearly been raped, probably incest, I do not want to be reading #MeToo lies from young women who have a warped sense of how to promote themselves in this competitive world. The complainant’s earlier evidence was of consensual sex and our investigations set that out clearly. Maybe this should be taken further because the penalty for false rape allegations should be equal to the penalties for the crime itself. This sort of behaviour is why I cannot get justice for 9-year-old rape and incest survivors,” comments Sharon Santiago of The RINJ Foundation.

One of the biggest problems of false rape allegations is that they taint the jury pool in all subsequent cases.

Regardless of how small the actual number of false claims may be, each case creates the basis for an argument of reasonable doubt in many other subsequent cases where there are arguably parallel circumstances such as extortion, blackmail, coercion or revenge.

Examples of false rape claims are revenge, extortion or coercion and they are seldom punished in any significant manner.

The RINJ Foundationadvanced an argument in 2010 for creating law to deal specifically with false allegations which could benefit the mission for ending rape impunity.

Jurists who know that the accuser is under significant penalty to tell the truth will take their word more seriously. Heretofore, false rape allegations are almost never dealt with despite the fact that they risk extraordinarily severe penalties, even the death penalty for the accused in some countries.

A lawyer for one or more of the women whom Assange had encounters with in August 2010, whose Twitter page looks more like a Glamour Magazine cover and not a women’s rights advocacy, is ranting about “victim’s” rights. But women’s rights advocates tend not to call a rape survivor a “victim”, unless they died trying to recover. “Survivor” is more positive and reflects the work required to be a survivor of the psychological nightmare which is tough, lifelong work.  In the real world, victims are the ones who suicide.  In this case however, initial reports to police and friends were well-documented as reports of consensual sex but the women wanted Assange forced to come back to Sweden to have a blood test.

Everybody seemed to want Assange back in Sweden. It was as if there was a prize for whomever succeeded. The police involved claim that some time later, their reports were confiscated and somebody changed the accounts to say that more information was needed and Assange should be brought back to Sweden for questioning.

Behind the Assange matter is probably not a nasty case of sexual violence, the two women we know about have claimed the sex was consensual. Political misdeeds, promises or inducements and the American propensity to abuse the extradition process is the greater suspicion and likelihood. Certainly Assange reasonably believed that to be true, moreover he repeatedly said that and spent seven years in a solitary confinement in the Ecuadorian Embassy in London to avoid the Swedish extradition process to the USA.

According to the BBC: “Following a long legal battle, the Wikileaks founder took refuge in Ecuador’s embassy in 2012 to avoid being taken to Sweden to be questioned.

“The Ecuadorian embassy was an obvious choice, since the South American country’s then-president, Rafael Correa, was a strong advocate for Wikileaks…” Read more from the BBC if you wish -> BBC – Julian Assange: Why is the Wikileaks co-founder a wanted man?

What Did Happen (From Numerous Sources)

Julian Assange was to be speaking at a conference in Sweden. The event organizer was 31-year-old Anna Ardin, press secretary of the so-called Brotherhood Movement, which is an adjunct of the Swedish Social Democratic Party.

Ardin has been accused of being seen with American operatives in Stockholm who met with her outside the American Embassy in that city. She has also been accused of running a front for anti-Cuban operations in liaison with the CIA. The latter allegation is only social media gossip.

According to sources whom Ardin spoke with, when Assange arrived in Stockholm on August 11, Ardin invited Assange to stay at her flat while she visited family in a remote part of Sweden. Ardin returned to her home on 13 August 2010.

Ardin and Assange had a conjugal encounter that night. Both have admitted a condom was used and it broke. Assange went on his way to publish more WikiLeaks.

On 20 August, Ardin went to police, not to make a complaint of sexual wrongdoing but alleging that Assange broke the condom during sex, a story similar to that of her friend, Sofia Wilen, whom she introduced to Assange, who had an encounter with Assange in the same location, days later. The two were saying they had concerns about sexually transmitted disease but did not report if they had been tested or not. 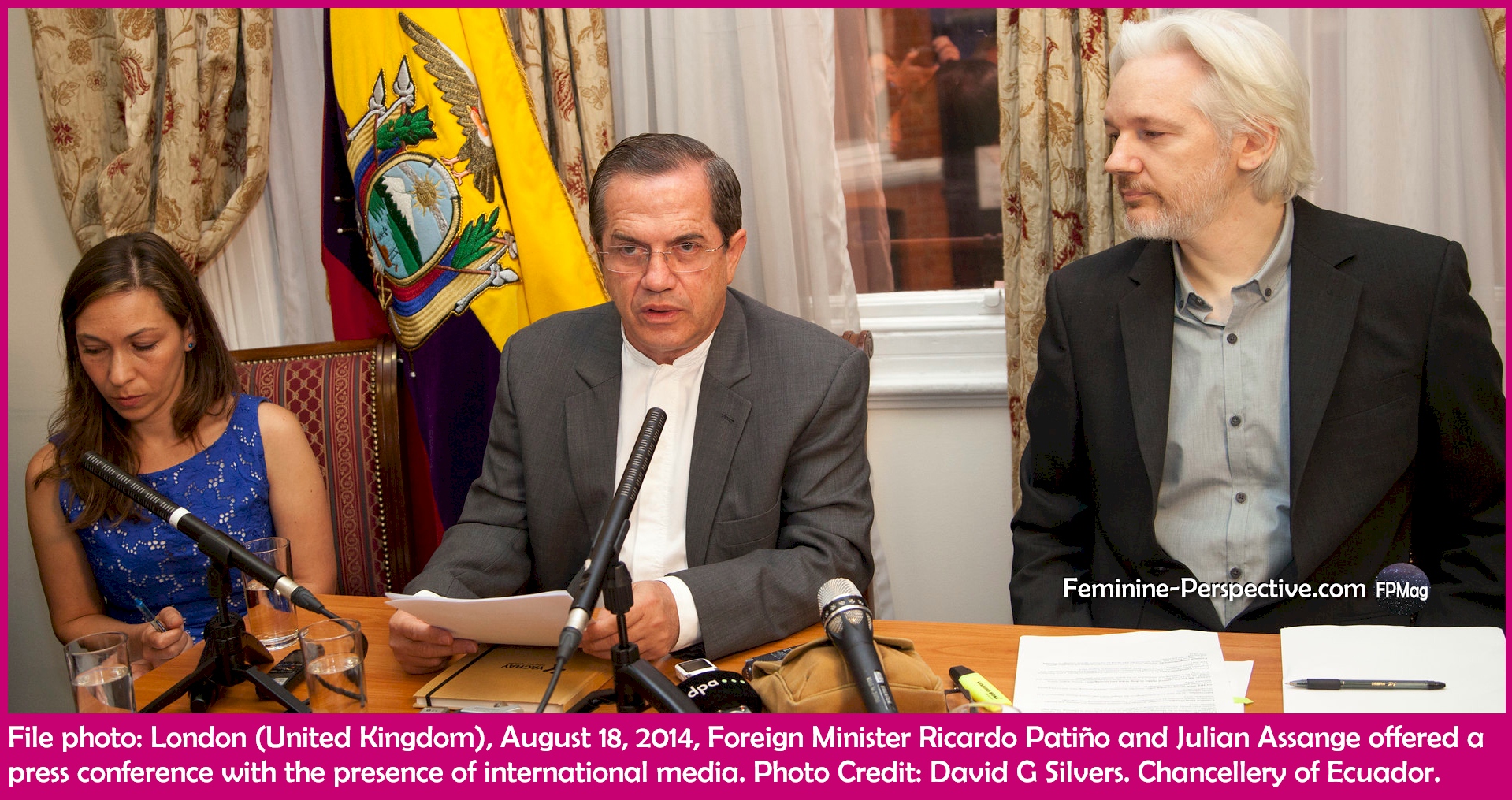 The two women shared that information and began boasting to friends according to media reports, social media statements, and exculpatory witness statements.

The 26-year-old woman, Sofia Wilen from Enköping, whom Ardin had introduced to Assange, had a consenting sexual encounter with Assange on the evening of 16 August 2010 and again the following morning. In the first session a condom was used. She claims a condom was not used in the morning of the 14th.

On 20 August 2010, Wilen would together with Ardin report to police alleging that Assange had refused to wear a condom and that the two women wanted Assange forcibly tested for sexually transmitted disease (STD) which medically speaking, of course, is what they should have been doing themselves. Police at the time emphatically stated the women were not seeking to bring charges against Assange but wanted to track him down and persuade him to be tested for STDs. This was occurring while Assange had become the number one front page story around the world.

Mr. Assange had left the country to go and publish another 15,000 secret documents that implicated the United States in mass murder. He had already published 75,000 documents related to crimes committed in the Afghanistan theatre of USA military operations. Obviously the United States wanted Assange stopped.

The USA saw the opportunity and very definitely interfered with the Swedish process. It took until November for Sweden to issue an arrest warrant with no charges and no particulars other than a desire to question Mr. Assange on a suspicion of rape.

Assange and his lawyers credibly adduced to the media and to Swedish authorities that this was all about a ploy to drag Assange back to Sweden and then extradite Assange to the United States which wanted him to stop publishing WikiLeaks documents apparently given to Assange by Chelsea Manning who is currently serving a lengthy prison sentence in the USA for espionage.

#MeToo is alive, but not for kids. RINJ women workers from RINJ rape clinics and medical outposts want to say #MeToo for millions of children, the most aggressively assaulted people in the world. That is the real problem of sexual violence which statistically bypasses people like Arden and Wilen and impacts in the majority (60%), females under 17 and another 30% between 17 and 20.

America may be entitled to its secrets but the American people are also entitled to the truth. Like him or not, Julian Assange revealed plenty of staggering truths. That is not a crime.