The things we do describe more about who we are than the things that are said about us.

This is a story of fervent dedication to the straight-edge values required to keep democracy running on an even keel.

Close political elections are going to be prevalent as divisiveness increases across political lines. Solving differences via dispute resolution mechanisms and making democracy work are the challenges we face.

Erik Nielsen and Micheal O’Brien, in 1957 and in 1988 respectively proved that the things we do describe more about who we are than anything else.

This is a story of fervent dedication to the straight-edge values required to keep democracy running on an even keel.

Close political elections are going to be prevalent as divisiveness increases across political lines. Solving differences via dispute resolution mechanisms and making democracy work are the challenges we face.

Erik Nielsen and Micheal O’Brien, in 1957 and in 1988 respectively proved that the process of change is best managed by staying ahead of change’s acceleration.

As O’Brien said in a speech in Markham, Ontario in 1990, “We can’t always know what happens next but if we always remember to do the right thing at the time, focussing on our core values, our outcome will never be a shame.”

A contested election will not destroy democracy

Joe Biden said that “It’s not my place or Donald Trump’s place to declare who has won this election,” Mr. Biden said. “That’s the decision of the American people.”

Determining the voters’ intentions is absolutely critical and proper election procedures and counting are paramount.

In the United States, an antagonist to the electoral process has attacked the American process but it has remained strong and certain.

Donald Trump has compounded the worry felt by some even before the election that a contested election would severely undermine faith in American democracy. That seems not to be possible. However, time will tell of Trump manages to obfuscate and overwhelm the Electoral College by December 14.

The United States has a long history of contested elections. With one exception, they have not badly damaged the American political system.

Something to think about: Fareed’s Take Micheal John O’Brien, a Canadian and also citizen of Ireland (European
Union) was born on August 21, 1950 at St. Joseph’s Hospital in Toronto,
Canada to Barbara O’Brien, an artist, and Edward O’Brien, an engineer and
executive of Spar Aerospace’s predecessor company. O’Brien’s studies include
human behaviour and public health including postgraduate studies in the
United States.

After graduating with a UofT BSc and a Commercial Pilot’s license from Maple
Flying School (established by Marion Alice Orr, one of Canada’s first women
pilots) in Vaughan (now a city) in York Region, Ontario, O’Brien in his
early 20s became the Chief Pilot, Specialty Air Services Limited from 1972 –
1979, flying out of what was then called Maple Airport and the Billy Bishop Toronto City Airport which is still in operation today.

From 1979 through 1989 O’Brien was a publisher, writer and editor with Maclean Hunter Limited’s Business Publishing Division and in
1989 acquired some of the publishing properties including “The Wednesday
Report”, “The Canadian Yong Astronaut” (terminated in 1992), and “Canadian Aerospace and Defence Technology”) he published for Maclean Hunter and merged them into MPRM Group Limited and continued publishing from 1989 to 2004.

O’Brien worked for a time as the Director of Operations for the Toronto Cosmetic Surgery Center which he left in 2014 to both work in several Asian countries with The RINJ Foundation while completing postgraduate studies. Currently O’Brien is the editor-in-chief of the global edition of Feminine-Perspective Magazine.

O’Brien was the Vice president of the Southern Alberta office of the
Canadian Cancer Society in Medicine Hat, Alberta (Now defunct.) in 1970
under Dr. Paul Racine.

Returning to Ontario in 1972 O’Brien undertook an
extensive life of Community involvement in Richmond Hill, Ontario as a
hockey coach, member of the Civic Improvement Committee of town council as
well as the Canada Day Committee.

At some point he became involved in helping community members locate missing children and troubled teens. This led to his forming a global civil society Group The RINJ Foundation for which he is today the CEO.

How democracy should work in divisive times and close elections.

Micheal’s entry into politics at the federal level was in the traditionally Liberal regions of Vaughan and Richmond Hill.

It was the “1988 Free Trade Election.” In a difficult period wherein neither the Conservatives or the Liberals were happy with their candidates, (Aldo Tollis and John Gamble).

O’Brien with a group of community leaders had encouraged Tony Roman to run in York North in 1984 and had agreed to run as an independent in 1988 for the Conservatives if another candidate could not be found or if John Gamble tried to run again.

O’Brien who was declared a winner on election night, November 21, 1988 and despite recounts that went back and forth, was sworn into office as elected MP to the House of Commons and made his Maiden Speech in the House of Commons of Canada on 23 December 1988. Read O’Brien’s Canada/USA Free Trade Speech: Micheal-OBrien-York_North-23December-1988-Speech-on-CDN-USA-Free-Trade-agreement

In November 1988 Mr. O’Brien “was declared the winner by 99 votes, was sworn in, and participated in the Canada-U.S. free-trade agreement debate in the short-lived First Session of the Thirty-Fourth Parliament”.

O’Brien made his maiden speech in the House of Commons on 23 December 1988. 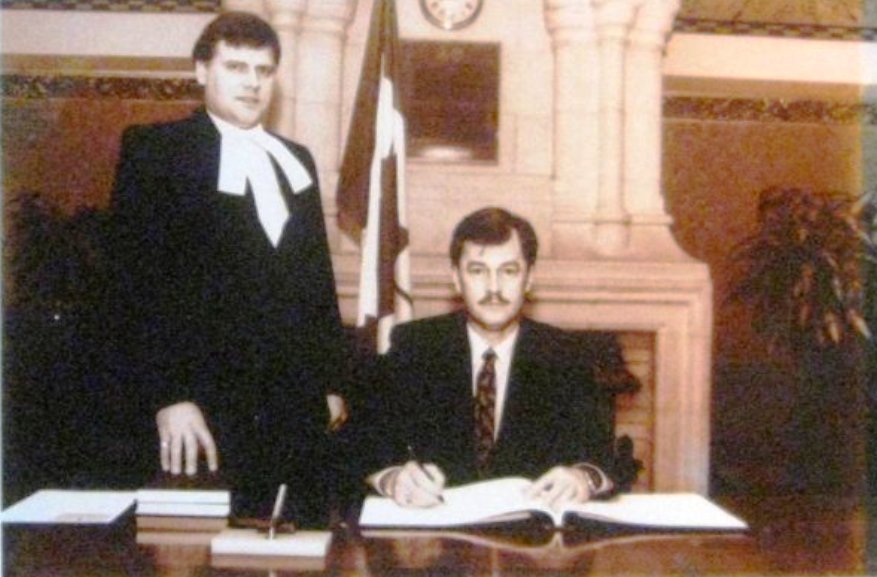 O’Brien (seated) being sworn in as an MP by Robert Marleau, Clerk of the House of Commons December 1988. Official Photograph

In 1988, in the federal riding of York North, O’Brien, endorsed by MP Tony Roman—for whom O’Brien had been one of the community leaders who convinced Roman to run as a “Coalition” independent in 1984—became the candidate for the Canadian federal Progressive Conservative Party.

O’Brien, had initially been declared the winner in the riding of York North in the 1988 federal election. Following three days of meetings with the Liberal election campaign officials at the returning office, a change was noted.

Three days later, as a result of a recount supervised by a contingent of the Liberal opponent, candidate Maurizio Bevilacqua, the latter was declared the winner. Mr. O’Brien sought a judicial recount, was declared the winner by 99 votes, was sworn in, and participated in the Canada-U.S. free-trade agreement debate in the short-lived First Session of the Thirty-Fourth Parliament.

Maurizio Bevilacqua appealed the recount and was subsequently declared the sitting Member by 77 votes (see Journals, April 3, 1989, pp. 2-3). (According to House of Commons of Canada records, 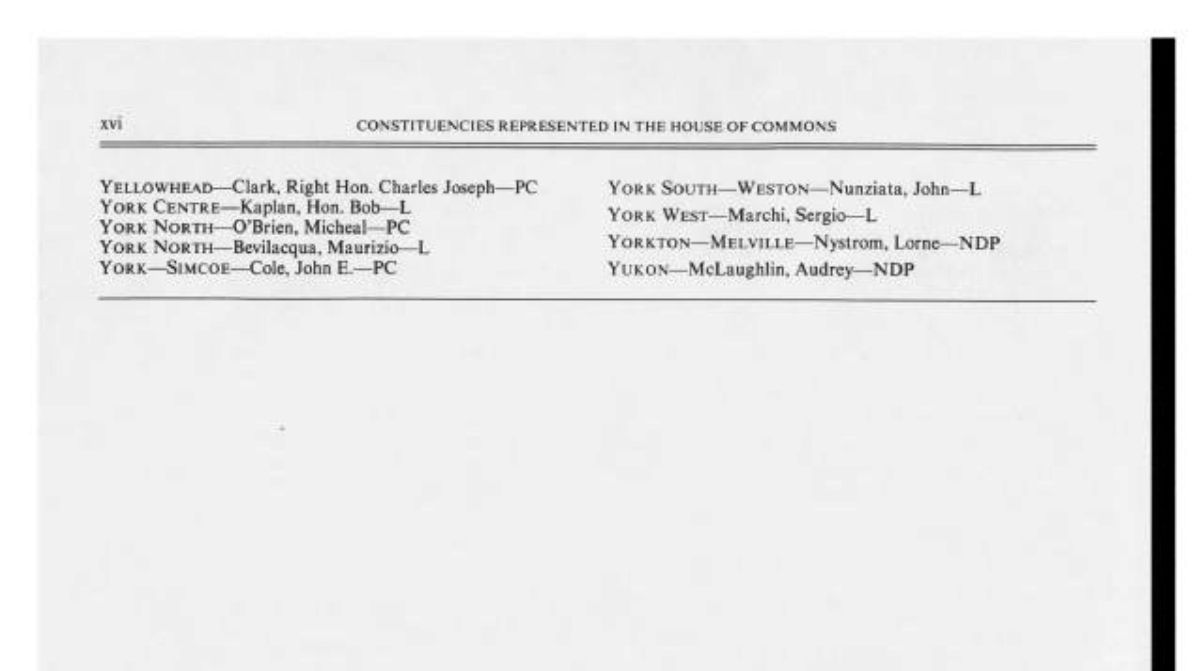 , O’Brien for the 1st Session and Maurizio Bevilacqua for the subsequent sessions.) It was looking like the Returning Officer, Margaret Britnell, did not know how to count votes. In any case, both men were eventually declared winners and both served as MPs in the House of Commons consecutively.

It was becoming increasingly clear that an unequivocal determination of the electorate’s intent was not possible.

O’Brien consulted extensively with the Honourable Erik Nielsen who had encountered a similar situation in 1957. With that precedent O’Brien and his riding association mounted a successful Controverted Election Act Petition to the Ontario Supreme Court.

The election was subsequently voided and the cases of O’Brien and Erik Nielsen have been cited as significant Supreme Court precedents in election law. (O’Brien v. Hamel (1990), 73 O.R. (2d) 87 (H.C.J.))

The Brian Mulroney Government eventually declared a by-election for O’Brien and Jean Chrétien. The by-election which took place December 10 1990 in the Federal Riding of York North saw the election of Maurizio Bevilacqua (Lib York North, Ontario) and Jean Chrétien (Lib) in Beauséjour, New Brunswick, as Brian Mulroney introduced the General Sales Tax (GST) which was the kiss of death for O’Brien’s chances at re-election.

The by-election became the “GST by-election” and the key winner became Jean Chrétien who had become the leader of the Liberal Party and Her Majesty’s Official Leader of the Opposition. 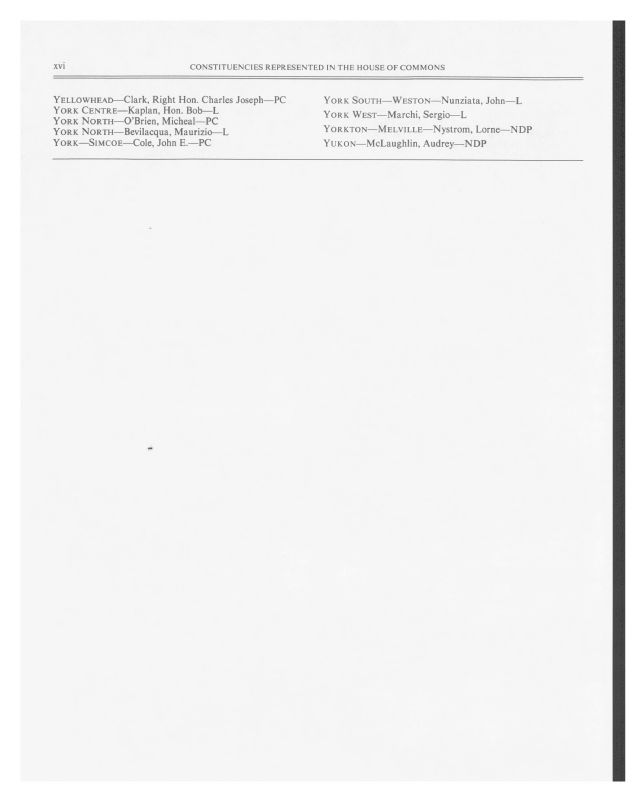 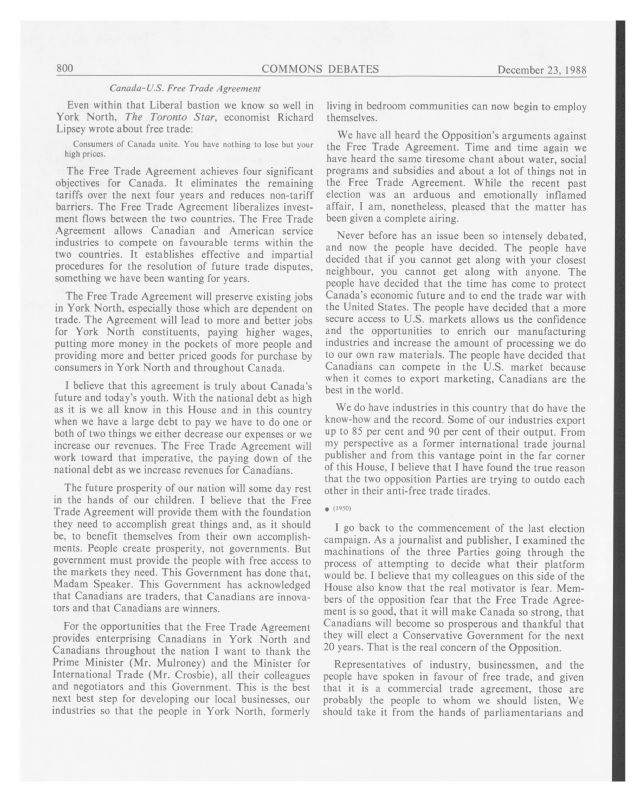 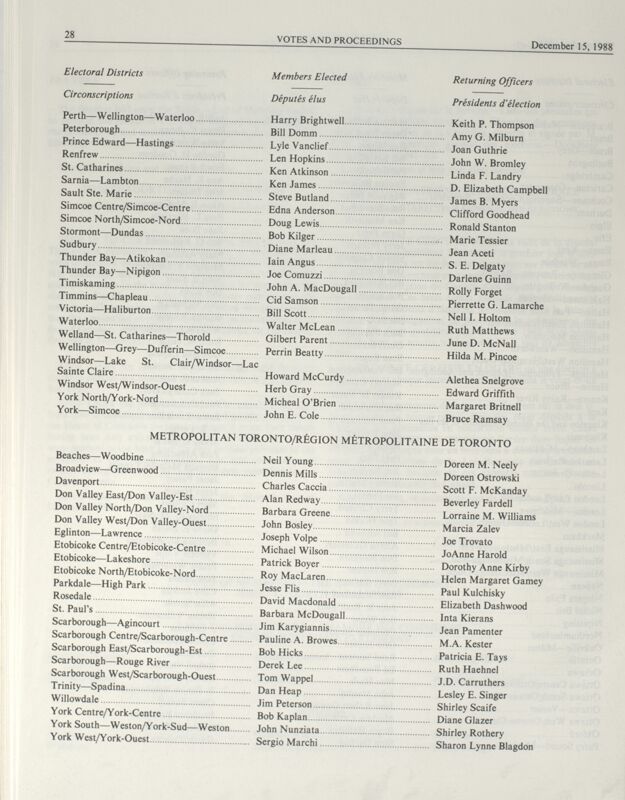