In the Zamboanga Peninsula of Mindanao Island in the Philippines, five girls aged 10-14 give birth each day.

Little children of five to ten years of age are being infected with HIV, Hepatitis and other Sexually Transmitted Diseases. according to a number of RSAC Clinics.

Menja Rahamtanirima, 5, who said an uncle abused her, with her mother, Domoima, and brother in Antananarivo. Her mother pressed charges. Credit Lynsey Addario for The New York Times 2006

Menja, then a five-year-old girl from Madagascar, was molested by her uncle on the father’s side.

For two weeks, she cried every time she urinated, but her family was unable to afford the medicine prescribed by the doctor. She has been inflicted with a sexually transmitted disease.

Nine-year-old Kenia reported being sodomized by her uncle, who threatened to kill her if she told anyone.4 Kenia acknowledged the abuse to a nurse at the local health clinic only because the nurse threatened to operate if Kenia did not talk.

As a result of the attack, she had a colostomy and two operations to close the surgical opening from that procedure, as well as other medical procedures to treat incontinence and anorexia.

For these girls, and the other sex abuse victims their contact with the formal legal system resulted in failure and trauma.

In Kenia’s case, for example, officials failed to notify her parents about the single hearing that took place in the prosecutor’s office, her uncle recanted his original confession and was set free, and her case file mysteriously disappeared. 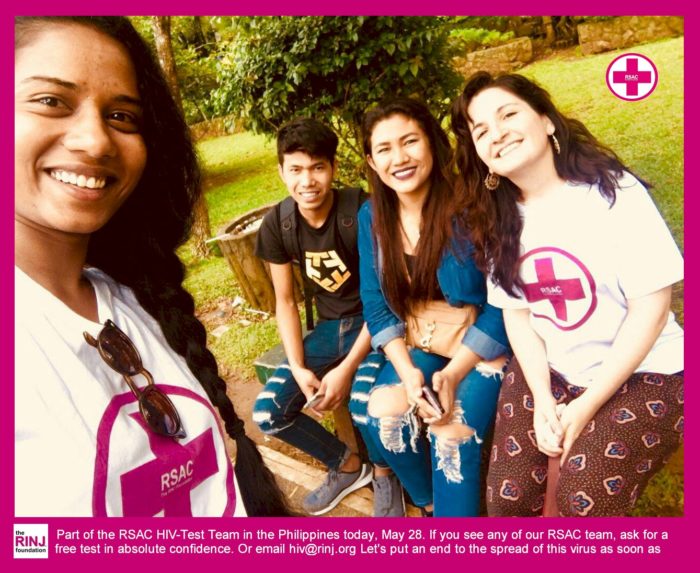 Part of the RSAC HIV-Test Team in the Philippines today, May 28. If you see any of our RSAC team, ask for a free test in absolute confidence.  Let’s put an end to the spread of this virus as soon as we can.

In the northern Philippines, a child was being sexually molested during the period of time the child’s mother was successfully fighting off the assailant’s attacks. The male offender is a friend of the grandmother. Court officials and even the prosecutor urged the child and mother to drop charges and go away. The matter continues with the complainants in hiding.

In the southern Philippines, Zamboanga Department of Social Welfare and Development (DSWD) Officer-in-Charge Emmanuel A. Leyco expressed alarm in March 2018 over a report regarding high numbers of children in Zamboanga becoming pregnant as a result of incest and rape.

A March report in the Philippine Daily Inquirer by Julie Alipala titled “Zamboanga phenomenon: 10-yr-olds giving birth” cited statistics from the local health office in that city which reported that 3,249  young girls gave birth in Zamboanga in 2017.
Of the total of 3,249 kids giving birth in the city in 2017:

The Population Commission has also reported that in the Zamboanga Peninsula, five girls aged 10-14 give birth each day.

“These statistics are most alarming. Children are becoming parents at an early age after being subjected to rape and incest – this is not a phenomenon that should be allowed to continue and must be stopped at once. Efforts must be made at the community level to make the public aware that rape and incest are not only wrong and punishable by law, but that they are a severe attack against the rights, health, and wellbeing of children.  These are serious forms of child abuse, and we cannot allow them to continue. Let us protect our children and provide those who have been victimized by incest and rape with the legal and psycho-social interventions necessary to help them recover from their ordeal. They are children, and they should be protected,” said Leyco,  Officer in Charge of Zamboanga.

Sadly it is not true such cases of rape & incest are punishable by law. The legal system in the Philippines is completely corrupt and dysfunctional.

The data we are seeing suggests a number of important directions.

Rape and incest are spreading HIV like wildfire. Get tested.

References for this article:
Child Sex Abuse within the Family in Sub-Saharan Africa Cornell University