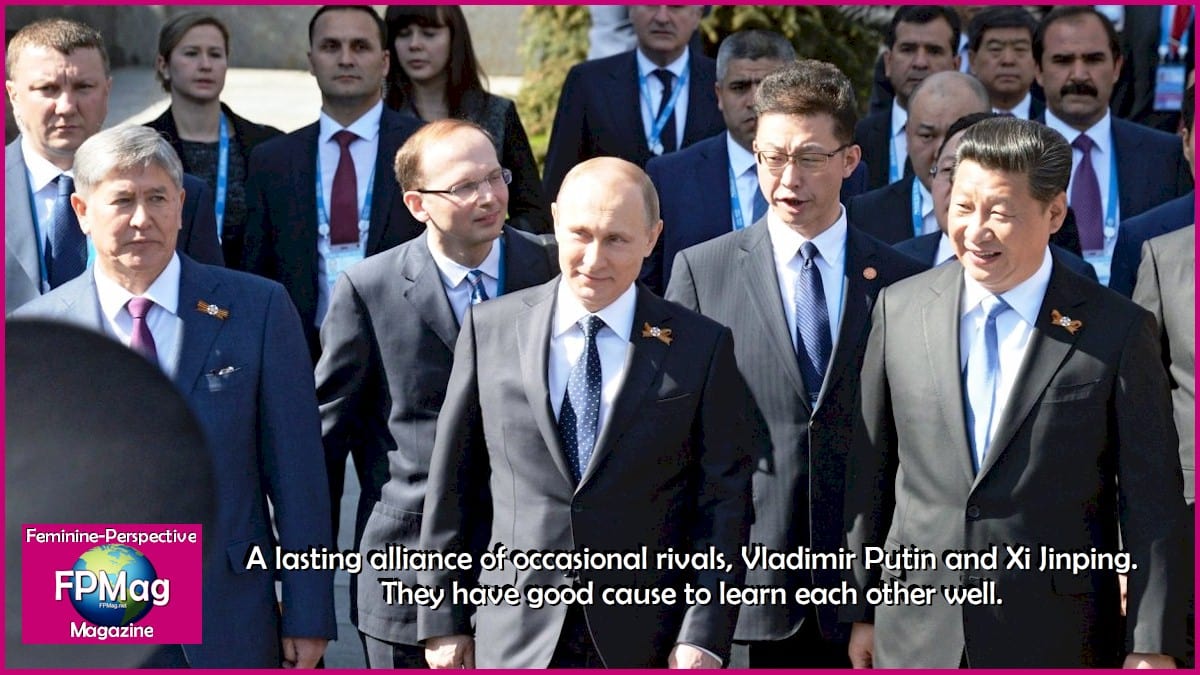 Xi Jinping and Valdimir Putin, are scheduled to meet Thursday 15 September at the Shanghai Cooperation Organization summit in Samarkand, Uzbekistan. It is expected the two close allies will discuss the USA/NATO war in Ukraine in which America seeks to control Ukraine in a NATO membership that puts American missiles on the Russian border after collapsing the Russian Federation, say sources close to the Kremlin who are women members of a women’s rights group and do not wish to be identified.

(The eagerness of these female sources to gather and share information may relate to the fact that the two nations under discussion here are among the most misogynistic in the world.)

Photo credit: Kremlin.ru. A lasting alliance of occasional rivals, Vladimir Putin and Xi Jinping. They have good cause to learn each other well.

Video: (Credit CCTV): Chinese President Xi Jinping arrived in Nur-Sultan, the capital city of Kazakhstan, on Wednesday for a state visit to the country at the invitation of Kazakh President Kassym-Jomart Tokayev.

The messages from the Chinese Ambassador to Russia are instructive of Chinese policy on the Ukraine war.

“Yes, Ambassador Zhang Hanhui and other Chinese officials have echoed the belief that America and NATO backed Russia into a corner with repeated expansions of the North Atlantic Treaty Organization, and the insidious infiltration of Europe with American ilitary bases. NATO is an antiquated defence alliance. Beijing also seems to believe that America sought to change the government of Ukraine during the past three decades and win support for internal political and economic camps seeking to align Ukraine with the European Union rather than Moscow for the benefit of a small number of Ukrainian oligarchs and their counterparts in America. In all, including the Maidan Revolution spearheaded by American infiltrators, is seen in Beijing as very corrupt,” explains Sara Qin, an active CCP member who explains that she is relaying what she has learned from colleagues connected to several Beijing officials on both the political and diplomatic sides, but not in any way an official statement.

“As the initiator and main instigator of the Ukrainian crisis, Washington, while imposing unprecedented comprehensive sanctions on Russia, continues to supply arms and military equipment to Ukraine,” Zhang was quoted as saying in an interview with the Russian state news agency TASS.

“Their ultimate goal is to exhaust and crush Russia with a protracted war and the cudgel of sanctions.”

The counter-offensive against Russia in Ukraine is run by NATO and appears to include thousands of American troops in disguise. Listen to these accents speaking English in random Ukrainian battle video.

FPMag searched for “NATO” on Twitter, and this below is what we got. Joe Biden, United Nations (António Manuel de Oliveira Guterres) and NATO, none of whom listen to the people. “Peace will not be delivered by the barrel of a gun.” These leaders are headed down the wrong path.

Another Russian politician, Boris Nadezhdin, wants fighting to end and negotiations to begin. Mr. Nadezhdin has criticized the invasion of Ukraine saying that Russian President Vladimir Putin had been misled by Russian intelligence services that apparently told him the resistance in neighboring Ukraine would be light and the Russian military operation would be brief.

Other Russian influencers are urging Vladimir Putin to launch a massive war against Ukraine instead of “messing around with a small force of 200,000 troops”.