In Europe, any media platform that tells the other side of the EU story is black-listed and even wiped out. The decimation of the Russian media including Novosti, Sputnik, Ruptly and Russia Today, is just one example of EU fascism as part of a revolutionary movement, strong in Germany and Italy, that seeks to change the face of Europe (EU) including massive militarization and media control.

The dictionary says, “Fascism is a system of government led by a [de facto] dictator who typically rules by suppressing opposition and criticism, controlling industry and commerce, and promoting nationalism and often racism.”

“We were accustomed to an international order which, since the 18th century, rested on a Western hegemony… Things change. And they are now deeply shaken by the mistakes of Westerners in certain crises, by the choices that have been made by Americans for several years which did not start with this administration, but which lead to revisiting certain implications of the conflicts in the Near and Middle East and elsewhere, and to rethinking diplomatic and military strategy, and sometimes elements of solidarity that we thought were immutable, eternal,” citing “des intangibles pour l’éternité”, Emmanuel Macron 2019, cf. The Saker 2019.

“Listening to the far-right former German Defence Minister, Ursula Gertrud von der Leyen, now President of the European Commission, talking about silencing the media, is more than worrisome for those who favour democracy and oppose fascism. von der Leyen, in a measure of impact, is conceivably more fascist than Bolsonaro who like von der Leyden is a revolutionary.

Ursula von der Leyen appears to be part of a narrowly defined German revolutionary movement with its own ideology and goals. It wants to take over the EU and supplant France in its military, social and leadership status. These goals are innocent on the surface but more like past history under close scrutiny,” notes Israeli security analyst Simon Baldock who is a contributor to FPMag.

Meanwhile, Vladimir Putin and Russia are not fascist but indeed an authoritarian dictatorship, much more reactionary than the German politicians’ current revolutionary movement which with Italy’s fascist leanings heads the EU into a new direction.

The European Parliament has set out studies perhaps designed to appoint a level of approval for challenging what it calls disinformation, but that campaign has unequivocally as further proof reveals in this article, turned into a propaganda effort that is more draconian than the measures it sought to stop.

“Due to the nationalist nature of fascist ideology on the one hand and Germany’s and Italy’s pursuit of hegemonic power and imperialist aggression on the other, there is a long research tradition of conceiving fascism as the ‘antithesis of internationalism,” writes Nathaniël Kunkeler and Martin Kristoffer Hamre in “Conceptions and Practices of International Fascism …”

“The banning of RT.com in Europe has been a dramatic example of not fearing disinformation but fearing the truth. This is an element of fascism,” responds Israeli writer Moishe Karem.

“Being ‘engaged’ by the platform is not necessarily beneficial for the user; it is not the result of a conscious decision but one of manipulation.

“The issue of social media addiction is a large area of psychological research and one secretly acknowledged by certain platform providers.

“The attention-based business model has been criticized from the second part of the twentieth century.

“Critiques state that it failed to deliver ‘merit goods’ to the audience, i.e., high-quality content with a social or cultural value.

“The public service media was meant to correct what this so-called ‘market failure’.  But that led to a new form of propaganda under a righteous pretext.”

A study and discussion of this topic from the EU perspective can be found here or from FPMag if the EU deletes this material. Media-freedom-vs-disinformation.

In December 2021, FPMag writers noticed that typically, Free press is stifled before war. Also, it was noted that the West was stifling free press. War between America’s NATO including the EU, began exactly two months later, following this report, on 24 February 2022.

Stifling media is a fascist tactic and overall strategy for the control of populations.

Not just Europeans but people around the world are being sold what is really fascism as a new political design to allegedly fix discontent, balance inequalities, and end hunger and poverty.

At this time, the danger of extended fascism is real. Discontent with governments is justifiable and widespread. People are seeking solutions.

Germany says it will host the largest military in Europe. Does that mean it will rid itself of America’s control of Germany? The most American missiles, bombers and bombs in Europe are in Germany.

German Chancellor Olaf Scholz in a keynote speech he delivered to Germany’s armed forces – the Bundeswehr did not explain what this means for America’s control over Germany’s defence.

“As the most populous nation with the greatest economic power and a country in the center of the continent, our army must become the cornerstone of conventional defence in Europe, the best-equipped force,” Scholz said

Fascism has an over-emphasis on media-control, militarism, and nationalistic symbolism.

Watch DW Video report: At the same time, we are showing clearly and credibly that Germany is ready to assume leading responsibility for the security of our continent,” Scholz said.

But look closer. Fascism is at work. Deutsche Welle, abbreviated DW, is a German state-owned entity that publishes content at the will of the German ruling class. Lately it has published dangerous lies. In this case it covers up the fact that the EU has sucked up agricultural products like Russian fertilizer for itself, denying this food growing support to Africa and hungry nations elsewhere.

Notable in this video is the ending story about Putin, protesting EU sanctions against Russia.

Editorial Note: This is categorically a DW deliberate lie and is misleading disinformation that will do severe harm—a deadly lie that influences populations in the EU to the deadly detriment of starving populations in Africa.

Truth: Putin protested specifically the sanctions against Russia’s export of fertilizer to anyone but the EU nations. That means that the EU issued sanctions that starve Africa and favour itself for political gain.

“Using the opportunity, I ask UN Under-Secretary-General [for Political and Peacebuilding Affairs Rosemary] DiCarlo to demand from the European Commission (EU)  that they remove discriminatory restrictions against developing countries,” Vladimir Putin said, yesterday.

“On August 29 the European Commission published an updated text of clarifications on the application of sanctions against fertilizers produced or exported from Russia – potassium chloride, as well as complex (NPK) fertilizers containing nitrogen, phosphorus and potassium. The new EU position makes it impossible to supply the Russian fertilizers to third countries with EU economic operators, EU infrastructure and EU territory,” citing Business Insider, Africa.

Justifiable fascist accusations against a government. Jair Bolsonaro’s hallmarks are fascism, violence and upheaval. He controls the message with hatred, violence and death. 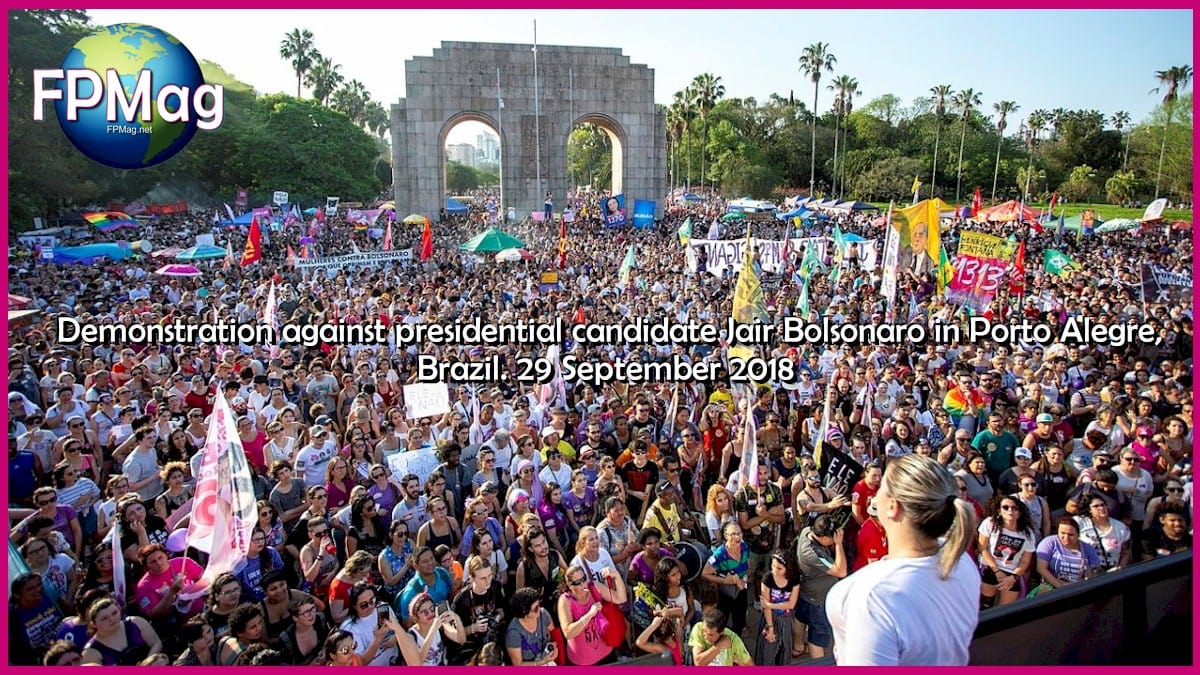 29 September 2018—Brazilians take to the streets to protest against a politician, thanks to these demonstrators, a well-known fascist, Jair Bolsonaro. Photo credit: CPERS Sindicato, CC BY-SA 2.0. Photo is cropped: Art/Cropping by Rosa Yamamoto FPMag 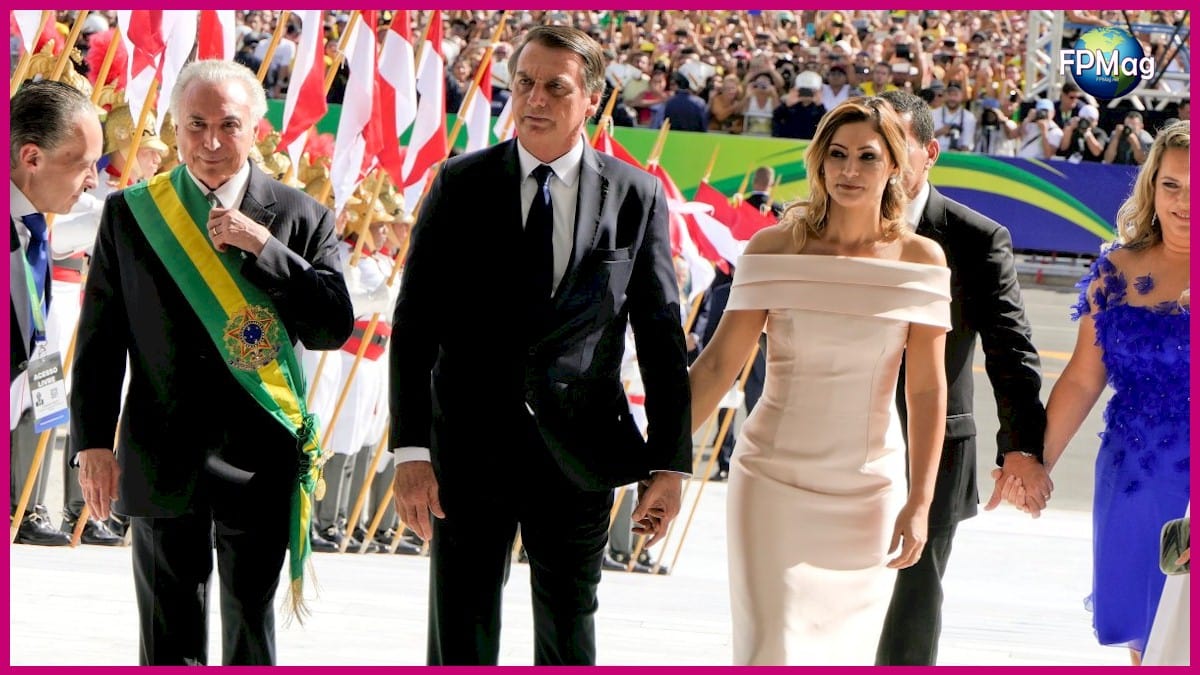 1 January 2019—Jair Bolsonaro Inauguration. On the left is Michel Temer, Brazilian politician, lawyer and writer who served as the 37th president of Brazil from 31 August 2016 to 31 December 2018. To the right of former president Temer is Jair Bolsonaro and his wife Michelle. Photo credit: Senado Federal – Solenidades. Homenagens, CC BY 2.0 Photo is cropped. Art/Cropping: Rosa Yamamoto / FPMag

Bolsonaro has made no effort at finding any kind of balance between regulatory measures to tackle disinformation and the protection of freedom of expression. If a person disagrees with him publicly, they are likely to vanish.

Wednesday’s murder of Benedito Cardoso dos Santos, 42, by stabbing him to death with a knife, was created by the media-blasted narrative of Jair Bolsonaro.

Bolsonaro has promoted a feverish adulation of his leadership that includes the murder of any opponent who is outspoken in a platform that could cost him votes in this fall’s election.

Juanita Goebertus Estrada, of Human Rights Watch (HRW), said of this crime, “Brazilians deserve peaceful elections and should be able to engage in political discussions without fear of violence or retaliation for their views.” 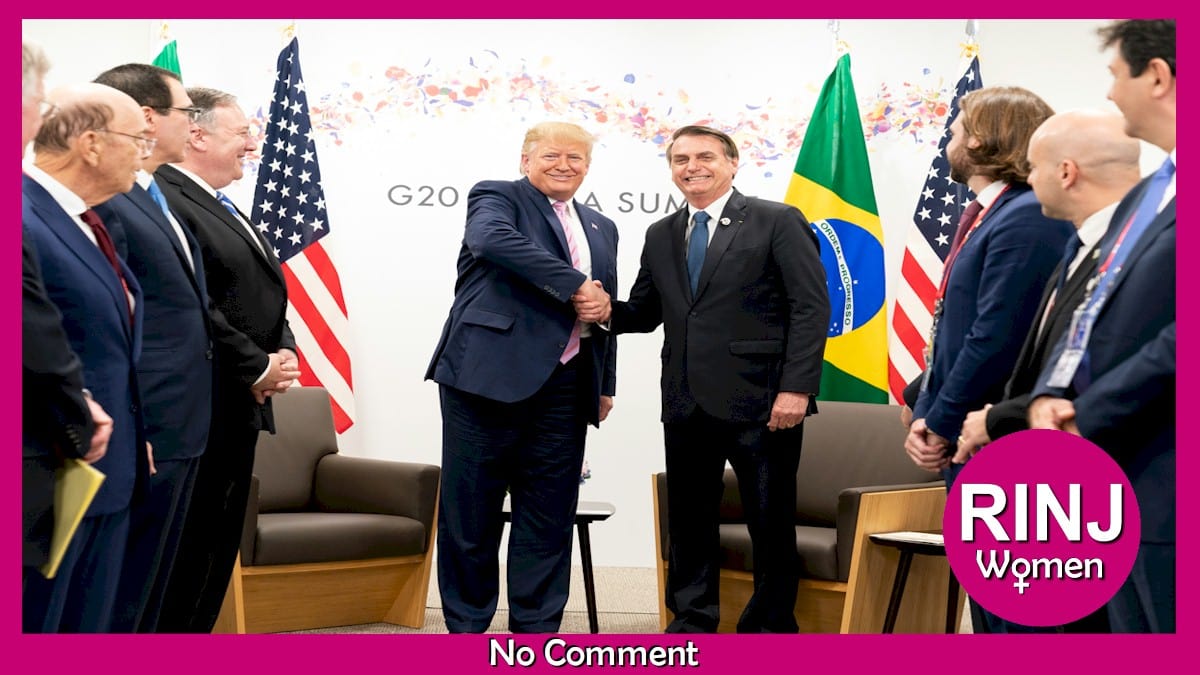