Biden sets up war with China. The old guy thinks Taiwan is his. Does Joe hear voices in the walls?- Editorial

From Batanes province in the Philippines, on the island of Y’ami/Mavudis, one can see Taiwan on a clear day. Japan is similarly close on the other side and could be right in the middle of hell breaking loose, soon, again. Japan’s Fumio Kishida says Japan wants a role in the bloodshed, again.

Speaking of wrong mindedness, Emperor Shōwa (Hirohito) once declared himself to be divine. He waged war in the 1930s and 1940s causing the deaths of millions.

Mao Zedong, it is estimated, killed as any as 55 million Chinese out of pure stupidity.

Chiang Kai-shek’s goofs allowed the Communists to rule China since 1949, also out of pure stupidity, and his own foolish treachery.

These people were all within a couple hundred miles of Tawan. Mao, Chiang, Hirohito, lunatics all. Who the hell does Joe Biden think he is, telling the world he wants another war, this time with China, from 11,000 kilometers away? Yankee, go home.

I have watched their warships sailing by, wondering what kind of sick people led this region into well over a hundred million preventable deaths in the 20th century and we still have these stinkers, or their kind, around. America was a big part of the regions’ past blood-fest, America making its own contribution in the millions, mostly in Korea and Japan.

Filipinos, Japanese, Koreans and all Chinese need to worry about the typhoon of blood Joe Biden is stirring up for the Asian Seas regions. 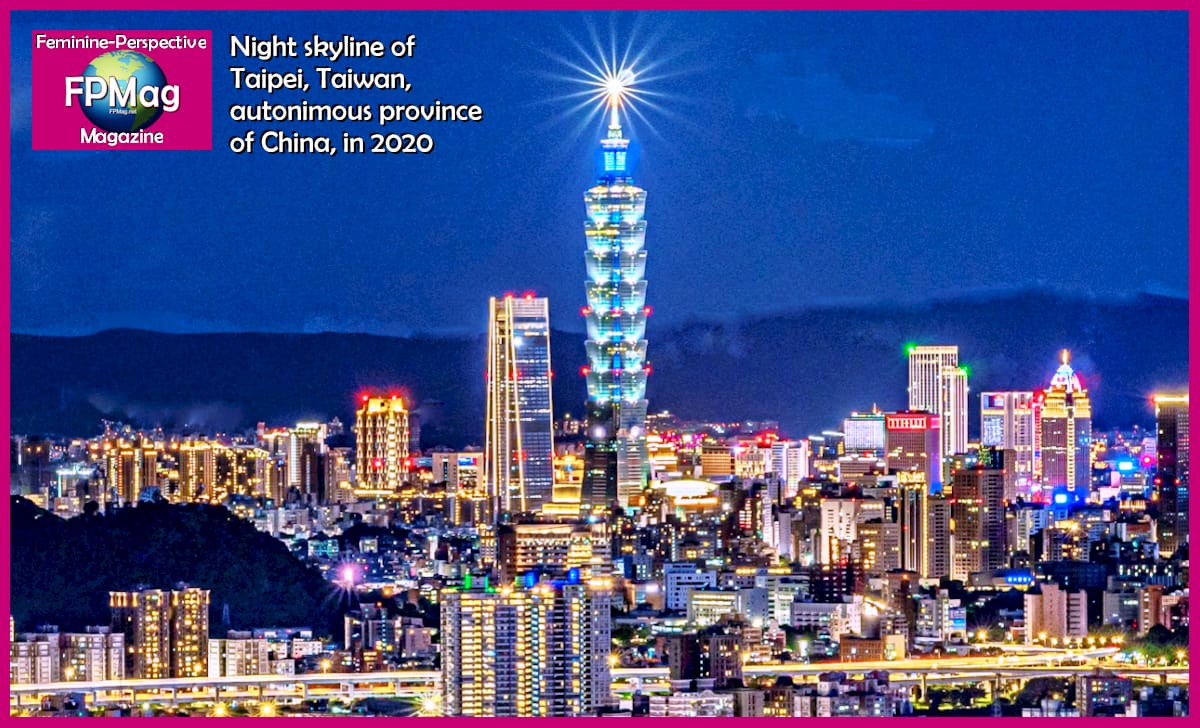 This time, America will not kill millions far from home without being touched at home.

Today, Joe Biden is channeling Chiang Kai-shek. That guy, Chiang, must have been the same kind of fanatic for stupidity Joe Biden has proven himself to be.

Biden says he is going to send American soldiers to Taiwan to fight Chinese if China raids Taiwan and confiscates the weapons of China’s upstart kids on the island.

White House staff again, as they did in May 2022, play down the US President’s remarks of going to war with China.

Joe Biden, you sir, in the context of Asian history, you are just one more dangerous, screwed-up fanatical Loonie and should not be in the White House. It’s no wonder the Secret Service have a challenge of a lifetime. Most of the world wants you dead—in self defence of humanity— you stupid, dangerous, egomaniac.

Joe Biden, Mao Zedong and Chiang Kai-Shek have much in common.

Mao Zedong, in 1958, launched the Great Leap Forward doctrine a fanatical campaign seeking to transform China’s economy from an agrarian to industrial basis.

Mao Zedong gave China the deadliest famine in known human history.  Estimates range from 15 to 55 million as the number of Chinese Mao Zedong killed between 1958 and 1962. Stupid is what stupid does.

Generalissimo Chiang Kai-shek (a..k.a.  Chiang Chung-cheng and Jiang Jieshi) was the leader of the Republic of China from 1928 to his death on 5 April 1975.

Chiang took power that lasted twenty‐two years after becoming president of the Republic of China in a filthy-red revolution and coup against the Communists in 1927.

Chiang lost that seat through his own stupid treachery by sparking a Communist revolution due to Chiang’s malfeasance in breaking a trust and betraying an alliance with the Communists.

The People’s Republic of China, defeated Chiang Kai-shek’s nationalist party in 1949 in a civil war that came about after a massive betrayal of Chiang against the Chinese Communist Party (CCP). He slaughtered many CCP members who were aligned and members of Chiang’s governing alliance.

Chiang Kai-shek in 1949 fled to Taipei on the island of Taiwan, part of China at the time, saying he would rule the Republic of China including all of the mainland from Taipei. He was delusional, controversial, colorful, and loveable.

Chiang was a Donald Trump. He refused to admit he lost. He lost his seat in Beijing and was fully ousted by the CCP he betrayed, and so Chiang ran for the islands.

The People’s Republic of China [Beijing], led by Mao Zedong, considered General Chiang as some kind of a nut-bar. One of Mao’s current admirers is Xi Jinping.

Chairman XI is adamant, even fanatical, about Taiwan reunification and fervently hates Chiang.

Chiang Kai shek had a winning personality. He also had a great smile and a congenial manner. He was genuine, not a political phony like Joe Biden. Biden is going to lead the outliers in a war against China as Chiang wanted to do.

It’s really hard to hear that Joe Biden still thinks that Taiwan belongs to the United States and that America will need to fight China in a war if China decides to raid Taiwan and disarm the rogue island that now bristles with American weapons.

Read that again. Taiwan does not belong to America. Taiwan is a province of China existing under an autonomous local government.

Taiwan is a lot like Prince Edward Island, province of Canada, except Ottawa pays no attention to PEI, or a lot less than Beijing gives to Taiwan. That’s how it was with Taiwan until America started again screwing around stirring the pot in order to suck some more money out of Taiwan for military equipment sales.

Xi Jingping is the wrong guy to mess around with. He is a nice man, and he adores his people and thus is a welcome leader, but intrinsically he is as fanatical in his beliefs as Mao Zedong and Chiang Kai-shek were in theirs, stumbling from one calamity after another.

Xi Jinping believes in the chain of sea froth that links turtle turds, rocks, and seaweed that a drunken cartographer with shaky knees—a scared man who hated being on the water— drew the nine-dash-line claiming all of the South China Sea. Pure madness.

Joe Biden forgets that Truman fired General MacArthur and nothing came of General Macarthur’s relationship with Chiang Kai-shek except that Joe Biden thinks he owns Taiwan.

General MacArthur and Chiang Kai-shek were alleged to be buddies because MacArthur needed the island for his fight against Korea. But that friendship ended when MacArthur lost his job and had nothing to offer General Chiang in either perception or reality. Chiang went on to rule the Republic of China until 1976. It was a good run.

According to the Hoover Institute, “In early 1950, the Republic of China seemed doomed. Chiang Kai-shek and his Nationalist regime had been driven off the mainland by victorious Communist forces, President Truman had rejected providing U.S. military aid to Taiwan, and the secretary of state, Dean Acheson, had dismissed Taiwan and South Korea as “not within the U.S. defense perimeter.” It seemed inevitable that Mao Zedong’s troops would invade Taiwan and absorb it into the People’s Republic of China.

“But the outbreak of war on the Korean Peninsula in June, scholars agree, changed everything. Truman ordered the Seventh Fleet to the Taiwan Strait to block an invasion of Taiwan, thereby giving Chiang and his regime a new lease on life. Soon, large-scale military and economic aid would flow to the Taiwan-based Nationalists. How that aid came about, however, is a story that has never been fully told. During those crucial months surrounding the outbreak of the Korean War, Chiang Kai-shek had begun to rely heavily on a small group of underground U.S. military personnel to form and implement policies to rescue his demoralized regime. This ad hoc group of unofficial foreign and military advisers, led by retired admiral Charles M. Cooke, former commander of the Seventh Fleet, launched covert military training and reform projects in the early 1950s that would play a crucial role in strengthening the tottering Nationalist government in Taiwan before the tide turned in Washington.” (Taiwan’s Secret ally—Hoover Institute)

The minute Biden in May began to warn that the United States was going to militarily back Taiwan in a sovereignty claim by the People’s Republic of China, the world knew Biden was off his gourd and needs a rocker in a dark room with rubber walls, away from everyone.

Chiang Kai-shek lost the fight with the Mao Zedong-led communists in Beijing after WWII. Then Chiang fled to Taipei and claimed that all of China will be ruled by the Taiwan island.

Chiang declared that Taiwan and the mainland would be known as the Republic of China (ROC) and that it would be under his leadership.

Mao Zedong said that the mainland and the Taiwan island would be People’s Republic of China (PRC) and ruled from Beijing.

While ignoring and publicly scoffing Chiang Kai-shek’s claim of leadership, Mao Zwdong continued to claim rule over all of ROC territories, autonomous and otherwise.

Since then, to this very day, the island of Taiwan less than 200km from mainland China officially calls itself the Republic of China (ROC).

The history matters little except to say that the violent feuding of the past must not repeat and it likely will not.

Tsai Ing-wen, now the President of the Republic of China, must surrender to the will of China and the one-China, two system policy before it is off the table.

Joe Biden should be hung for promoting two major wars in one year. Whatever happens in Ukraine is equally on Biden as it is on Putin. But declaring conditional war on China did not need to happen and it risks millions of Asian lives. America has no right to do that.

The article " Biden sets up war with China. The old guy thinks Taiwan is his. Does Joe hear voices in the walls?- Editorial " was written by Author: Micheal John OBrien (Biography, Email) Editor in Chief
Contact Micheal John OBrien on Twitter ~ Facebook ~ LinkedIn ~ Instagram ~ Find on Wikipedia ~ Find on YouTube