A desperate Ukraine is getting shellacked as a USA-proxy against Russia, killing or displacing its women and children

Genuine humanitarian workers in Ukraine say, “End this War”, in every way they can say this. “Start talks now.”

“There is no clear sight of any possible end to this madness in the ‘Eastern Europe War’ that shows signs of growing massively killing more Ukrainian and Russian women in Ukraine and  destroying millions more children and their families in Europe, even wiping out the EU and killing millions around the world,” says Dale Carter, security director of The RINJ Foundation.

And that is just Ukraine. Millions around the world are suffering hunger while the war is sucking up global humanitarianism from millions who struggle to stay alive in barely noticed flooding disasters in Pakistan.

USA and Russia already at new quasi-war in space.

Kosmos 2558 is rumored to be an “inspector satellite” able to maneuver close to other spacecraft, observe, investigate, and even destroy the target, in this case a spy satellite providing war-fighting information which America uses to direct the war in Ukraine, say sources. Russia has already tested this technique leaving debris floating around the Earth as a consequence of destroying a satellite in a test situation. 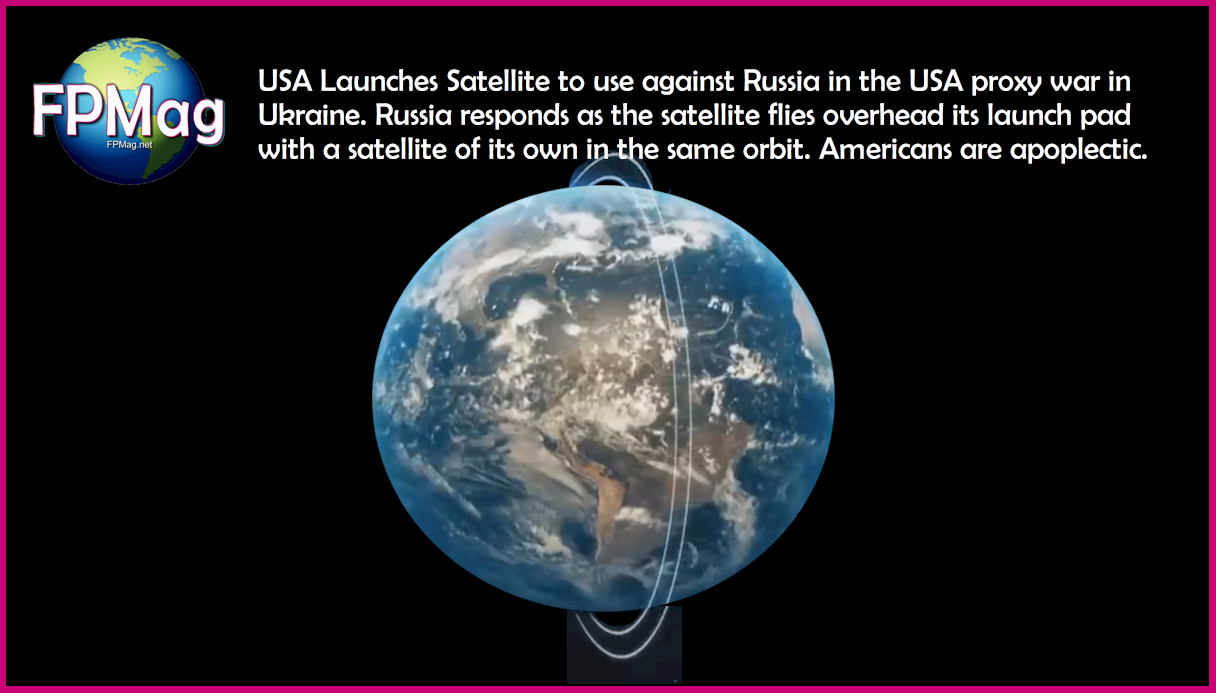 Direct military conflict between USA and Russia has begun in space. A top secret American military spy satellite used for its proxy war in Ukraine is being chased by a Russian satellite in the same orbit according to New York City-based Space.com.
Photo Art/Cropping/Enhancement: Rosa Yamamoto FPMag

Evidence of America’s full participation in Ukraine’s so-called Counter-Offensive has been flagged as a potential risk of war expansion to other nations.

The so-called Ukraine counter-offensive masterminded by the Americans and Brits allegedly taking place at eight key points against Donbass, does not seem to medical and other humanitarian workers, on the ground across the battle lines, to be changing the battle lines and territory boundaries except that some areas are becoming bloodier for both sides.

Both sides, say medical observers,  claim success but according to both medical and mortuary data, both sides are losing many people and civilians are suffering, including children, intensely.

The larger picture does not look good for America. Unhappy Moscow officials about USA impunity thus far, and increasing demands for military retaliation, is on the table in Russia.

“Volodymyr Zelenskyy’s Ukraine is a proxy willing to do the fighting and take the losses in lives and America clearly is willing to load the country up with weapons, intelligence , command, control, communications and space assets needed to bash the hell out of Russia,” suggests Israeli security intelligence analyst Simon Baldock, “But,” he adds, “it is not working the way either side Russia and America, expected.  Zelenskyy is virtually unmanageable by America and extremely demanding of his benefactors including US Allies Canada, Britain and the European Union to a lessor degree. Russia is far more resilient than Ukraine and has a century of hardships that gave the Kremlin a battle-hardened tortoise shell unlike any other nation in the world. Despite twenty-five-million Russians being slaughtered by Hitler’s Nazis in WWII, Russia prevailed and kicked the hell out of Hitler’s armies,” added Mr. Baldock.

“Moscow’s special military operation is purposeful and driven by patriotic support of ethnic-Russians distressed in Ukraine. That is a strong motivator but an even greater one is the NATO threat. Russia seeks to block NATO expansion toward Russian borders, rid Donbass of Nazi/nationalistic militias and stop the 14,000 slaughters of  ethnic Russians and Russian-speaking communities in the Donbass since 2014,” explains Mr. Baldock. “That in all is powerful motivation. Russia now controls nearly 25% of what was once Ukraine nine years ago, and will not likely relinquish those gains, ever. More than that, China is beginning to see that parallels between Russia trying to hold on to its autonomous regions of Donetsk PR and Luhansk PR as republics similar to its case with Taiwan,” Mr. Baldock continued.

“I am picking up rumblings in Moscow of officials griping against the Kremlin saying that America is completely involved as a full party to the Ukraine conflict and should no longer be immune to retaliation. A question that needs to be answered for 2023 is ‘Will China support a Russian retaliation against America? Will Iran? The g20 meeting in Bali in November may lead to some answers, but Vladimir Putin has not confirmed his presence owing to security logistics,” Mr. Baldock said.

“If Ukraine falls and the West perishes, the big winner will not be Putin’s Russia, but Xi Jinping’s China,” Italian politician Giorgia Meloni, leader of the Brothers of Italy party, told a business conference in Cernobbio on Sunday.

“The war in Ukraine is the tip of the iceberg of a conflict aimed at reshaping the world order,” she said.

Russian Intelligence is speaking out more since July, about USA being a party to the Ukraine conflict.

Ukraine’s deputy head of military intelligence, told The Telegraph newspaper in August that Washington coordinates HIMARS missile strikes. “All this undeniably proves that Washington, contrary to White House and Pentagon claims, is directly involved in the conflict in Ukraine,” the defence ministry said.

According to India media reports, “All this undeniably proves that Washington, contrary to White House and Pentagon claims, is directly involved in the conflict in Ukraine,” the defence ministry of the Russian Federation iterated, blaming the US for planning an attack with Ukraine on the troops of Russia.”

“It is the Biden administration that is directly responsible for all Kyiv-approved rocket attacks on residential areas and civilian infrastructure in populated areas of Donbas and other regions, which have resulted in mass deaths of civilians,” the Russian Federation defence ministry further stressed.

The picture and its story: Russian Soyuz rocket launches the Kosmos 2558 military satellite from Plesetsk Cosmodrome on 1 August 2022. USA had launched its spy satellite to use against Russia in the USA proxy war in Ukraine. Russia responds as the satellite flies overhead its launch pad with a satellite of its own in the same orbit. Americans are apoplectic.  Photo credit: mil.ru. Photo is cropped. Art/Cropping/Enhancement: Rosa Yamamoto FPMag

The Controversial Zaporizhzhya Nuclear Power Plant site is on the minds of people around the world, especially in Europe, but apart from a continuing modernization on the plant, there has been no significant breach in the plant and a massive increase in American-driven propaganda trying to lever the IAEA, the UN and Russia for its purposes.

“Pieces of the weapons including kamikaze drones and missiles landing at the ZNPP (Zaporizhzhya Nuclear Power Plant) show markings in the English language including ‘Made in USA 2022’. For example, pieces of circuit board have many words marked in English indicating the correct  wire connections to releases, electromagnetic servo mechanisms, and other boards,” reports an unofficial civil society ZNPP surveillance team watching the NPP operated by Ukraine’s state nuclear power company, Energoatom, while under Russian military control.

“The significance of this information” says the internal report, “is that according to the Russian defence Ministry, on many occasions, it has no such components from the West.”

Civil society observers on either side of the Dnipro say they have seen both sides fire weapons at each other across the Dnieper river but that it is only the Ukraine side that is launching attacks against the ZNPP which is guarded by Russian military forces who also protect the IEAE team located there.

During a Ukraine amphibious (attempted) assault against what appeared to be the area of the Kakhovka reservoir seen from the Ukrainian Forces Dnipropetrovshchyna (Dnipropetrovks Oblast) side, drones and missiles landed at or nearby the ZNPP, say observers, but they say they were not able to get close because of an active firefight taking place to the west of the plant on the reservoir side. (See the map below.)

The International Atomic Energy Agency (IAEA) released a statement on Saturday to say that the number five reactor was disconnected for a period of time. The number six reactor had continued to run. Other reactors are in the midst of modernizations or repairs.

Below are past file photos from the public domain. Views of all six reactors as they have been during the modernization program. 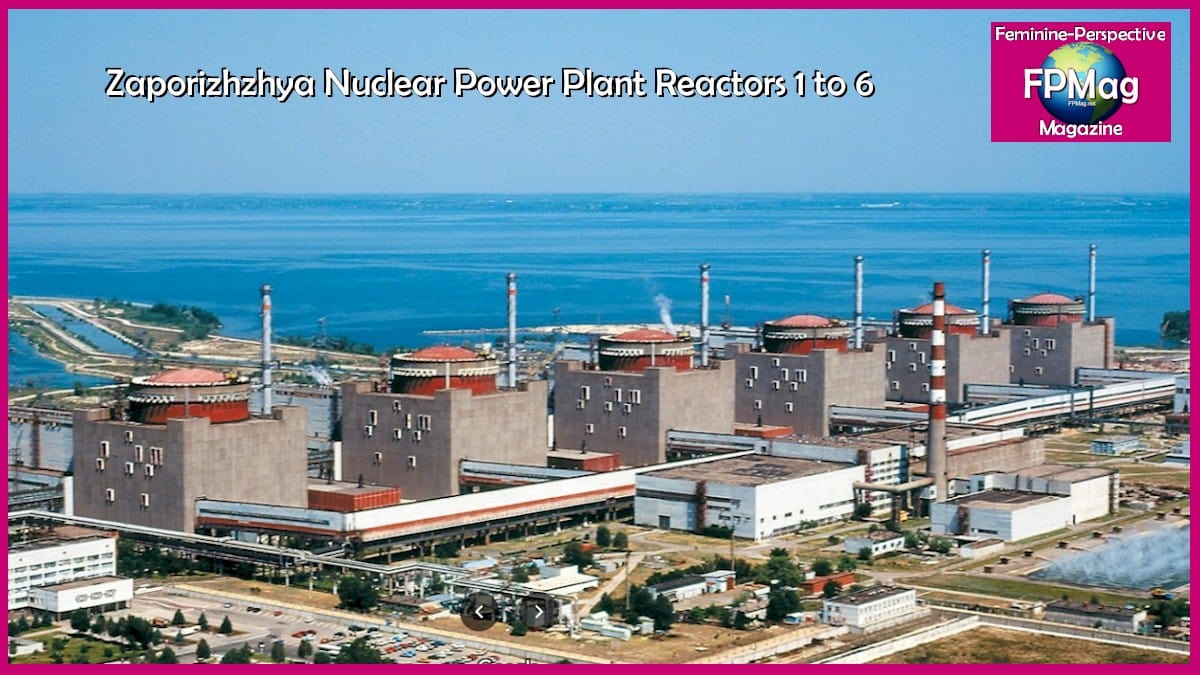 File photos of the Energodar-based NPP  from the public domain. Views of all six reactors as they have been (2018)  during the modernization program in the past 10 years. 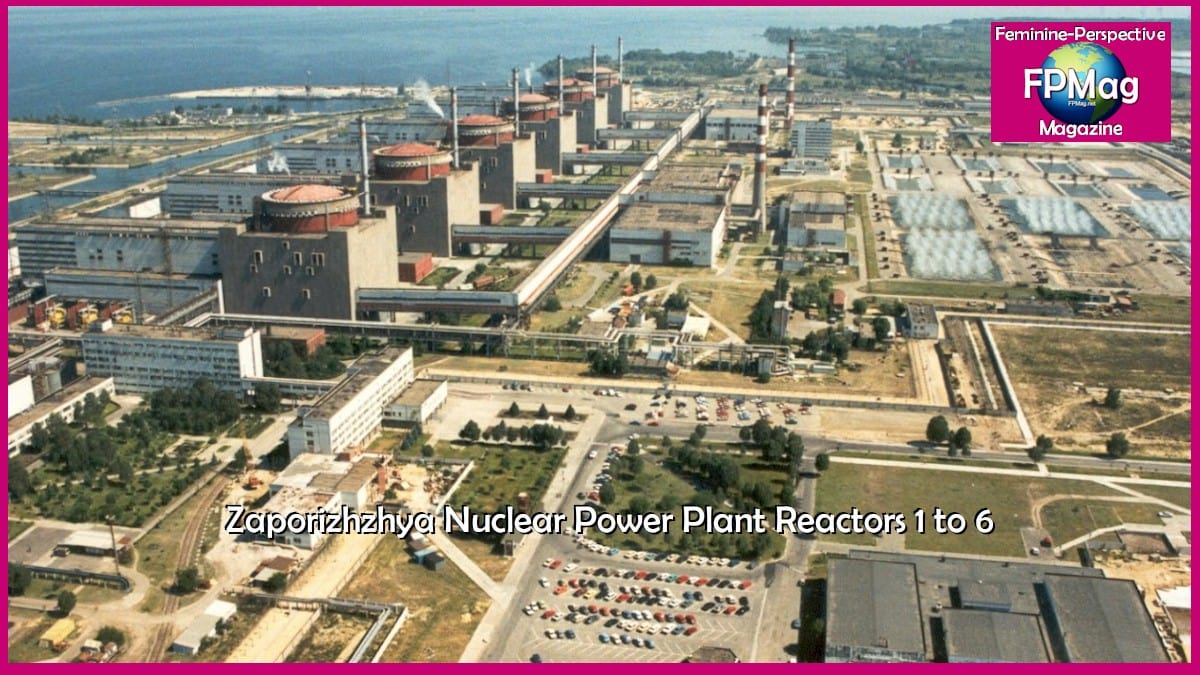 “Our people on the ground say that there is nothing observed that assuages concerns about these six  reactors at the ZNPP,” explained Alona Adamovich, a regional organizer and medical director of the global RINJ Foundation.

The article " A desperate Ukraine is getting shellacked as a USA-proxy against Russia, killing or displacing its women and children " was written by Author: Micheal John OBrien (Biography, Email) Editor in Chief
Contact Micheal John OBrien on Twitter ~ Facebook ~ LinkedIn ~ Instagram ~ Find on Wikipedia ~ Find on YouTube