Ukraine dragging the United States into the war against Russia with no-fly zones and US troops on the ground may be fair dinkum considering that Joe Biden brought on this war by antagonizing Vladimir Putin with his insistence that Ukraine become a NATO country with US missiles and troops along the Russian border, but Joe Biden does not like the idea. It would mean exacerbating what USA Senators seem to think is already a crisis on the verge of nuclear war.

Ukraine is getting pounded, destroyed.

Alona Adamovich, a RINJ member and NGO organizer in the city of Mariupol, Ukraine is on the blower together with Melissa Hemingway and they say that the small evacuations are continuing but the trips are rugged, “on terrible roads” in the two busses she and her RINJ Women chapter crew are operating in the region, heading to a Rostov processing drop-off point in Russia. They are focused on medivacs.

“The biggest issue is finding diesel fuel, and candles,” she explained.

The picture and its story: Putin’s legacy? RINJ birthing clinics in Mariupol basements like those by the bomb craters of Idlib, & Dier Ezzor, Syria. Midwifery by lamp light, candles, tears. 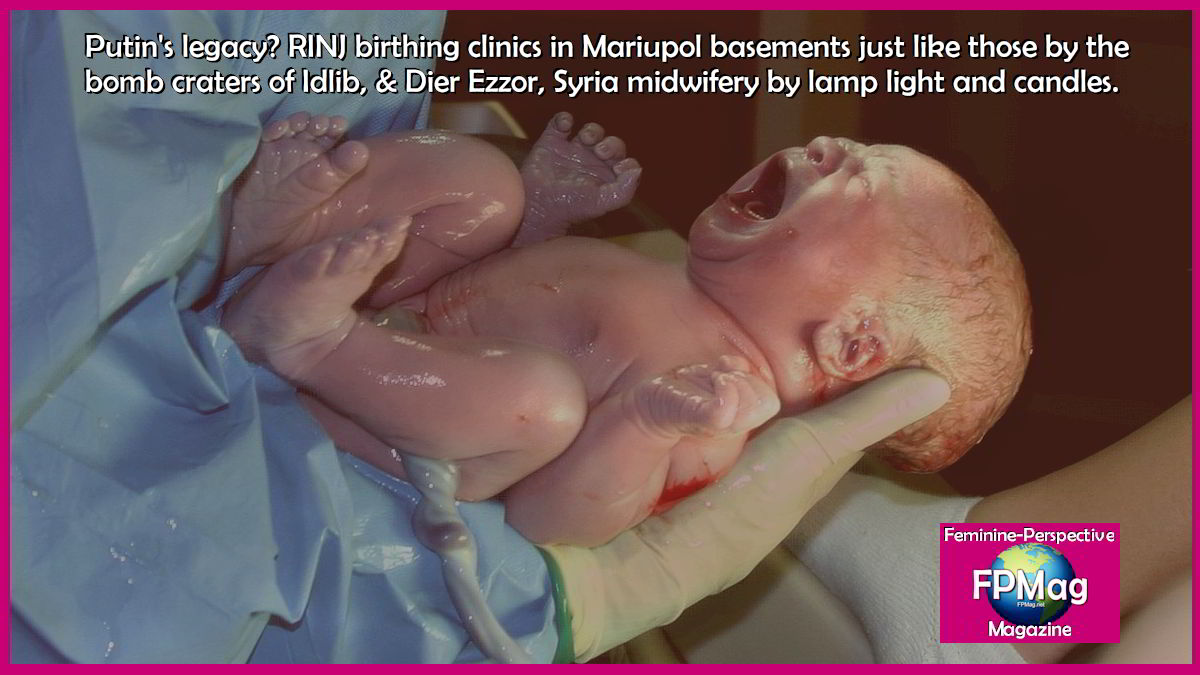 Rare diesel fuel, and RINJ birthing clinics in Mariupol basements just like those by the bomb craters of Idlib and Dier Ezzor, Syria, midwifery by lamp light and candles.

“Much of the fuel storage on the Ukraine side has been exploded,” explains Alona Adamovich, “so we need to find local tanks that still have fuel, or we carry more from Russia in fuel cans. But detours on this side can burn up our diesel. We are paying very large sums of money for the fuel and are the only busses from Mariupol running  today despite promises to have a convoy come here. Mostly we carry the extremely young and the extremely old. That means new mothers and their babies who would perish in the cold otherwise, and elderly grandpa and grandmothers. You will be mad at me but yesterday I was delivering a baby in one of our basement birthing clinics and I realized my hands stunk of diesel fuel because I had last syphoned diesel for Lana, one of our drivers. I scrubbed and scrubbed in again but I cannot get rid of the slight odor of fuel,” she said as she continued her update. “The babies and moms are getting good care and doing well without exception, because we are bringing water and supplies back from Rostov,” the nurse/midwife added. 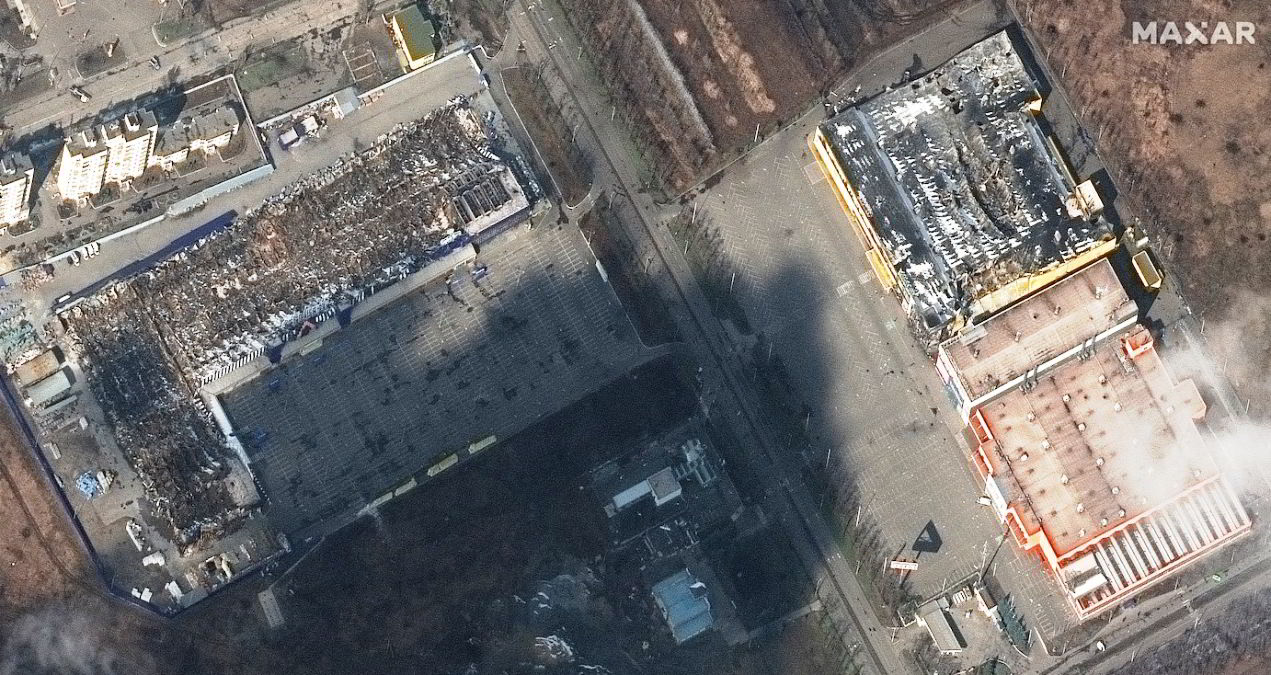 “We are talking about the strongest and best mothers on Earth,” she exclaimed with a brief sob and sniffle. These are tough times for humanitarian workers. “But the joy of seeing a healthy baby in mother’s arms is a highlight, that makes me forget the bomb craters everywhere,” she said.

“We must make sure this war stops. Give them what they want. These babies must have a future,” Alona said, with emphasis.

Ms. Adamovich is personally in agreement with Volodymyr Zelenskyy who is pleading for a ‘No-Fly Zone’ over Ukraine, provided by NATO ‘s USA warplanes. She says most people she talks to in Mariupol are also in agreement.

“We cannot take this much longer. Everything is smashed. We have nothing.”

But Alona Adamovich is terrified of the possible worst scenario this might bring—global nuclear war. “I want to live my life,” she added. 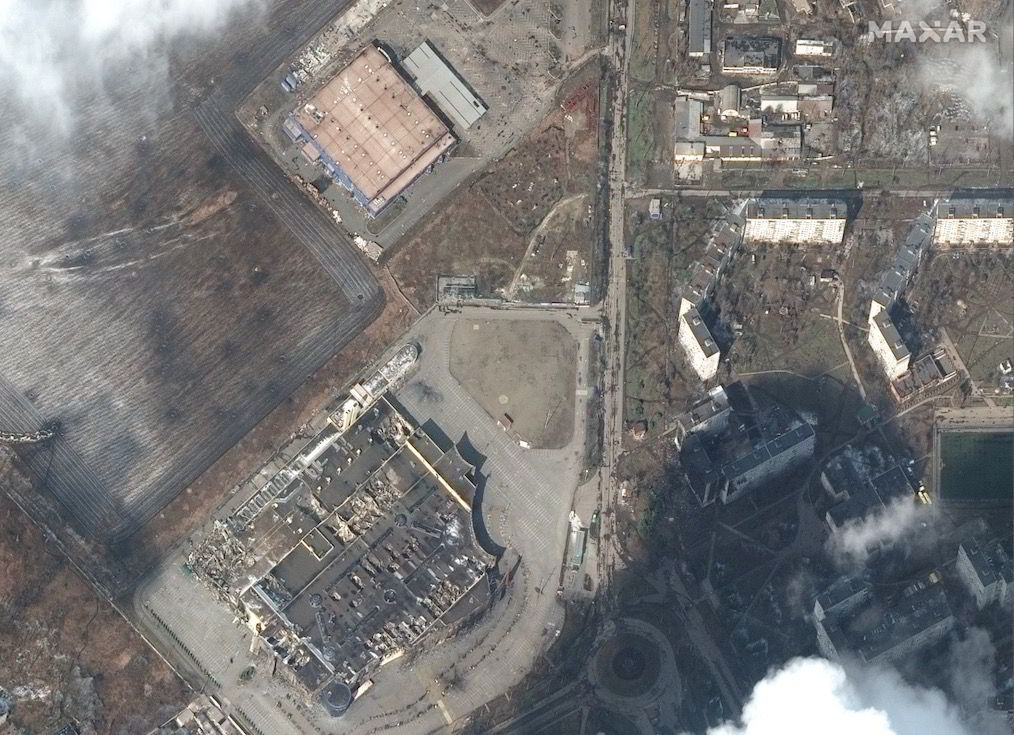 Zelenskyy is pushing hard, complaining the USA and Europe has not done enough

Dragging NATO in is what Zelenskyy is trying to accomplish despite Joseph Biden’s claims that America has already dealt powerful blows to Russia, and Russia says America has declared economic war on Russia. This all may be over Zelenskyy’s head under the stressful circumstance he endures, but the dangers include global nuclear war if Russian leadership feels it is about to be overwhelmed in a fight with a couple dozen or more nations of NATO.

“Proponents, from street protesters in Europe to a group of foreign policy grandees in the United States, say a no-fly zone is essential to save lives in Ukraine, but even some of U.S. President Joe Biden’s staunchest opponents in Congress have been adamantly opposed, with Republican Senator Marco Rubio warning it could bring about “World War III,” suggests David Brunnstrom in a Reuters article.

Another worrisome outcome of the dramatic surge in nuclear war cheerleading and hatred is the worry of starving more millions of people as both Ukraine and Russian food grains are locked up in trains and cargo containers that were destine for ships. Ukraine has banned the export of food crops for the present time.

Canceling Russians and even Ukrainians while stealing their money as Facebook encourages users to promote the killing of ethnic Russians in Ukraine “in the context of the Ukraine conflict” is a “foretelling of a world ‘gone to hell in a handbasket‘ or heading to a world war anyway,” says Dale Carter, security director for The RINJ Foundation.

Meta spokesman Joe Osborne said Facebook was “for the time being, making a narrow exception for praise of the neo-Nazi Azov Regiment strictly in the context of defending Ukraine, or in their role as part of the Ukraine National Guard,” reports Reuters.

Additionally, brands such as MacDonald’s, Shell, BP, Exxon, Starbucks, Zara, IKEA, H&M, Nike and Adidas have been accused of scamming Russian consumers out of billions of rubles by refusing to reimburse gift cards and prepaid cash cards bought before these companies did their withdrawals from the Russian marketplace. These companies are allegedly exploiting the Russian people, not promoting the American war effort against Russia as they claim.

So why is Zelenskyy’s plan met with critical response?

There seems to be a consensus that doing things like sending American troops back into Ukraine or initiating a no-fly zone over Ukraine would trigger a global nuclear war under the circumstances.

America has been supporting Ukraine with $billions in military aid since 1993, pouring weapons into Ukraine. 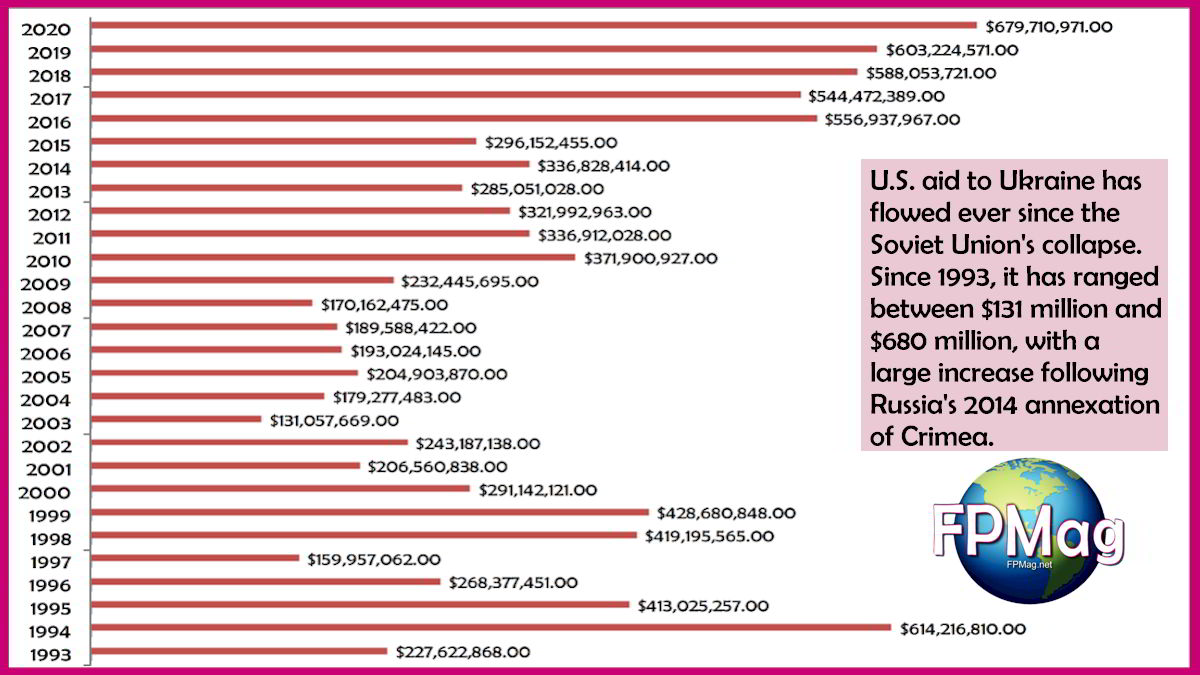 Blocking the world from Russian media, America has acted fast and thoroughly to evacuate most of its soldiers, disguise its embedded operations in Ukraine, a country America has controlled or at least significantly influenced with $billions for some thirty years, documents indicate.

By 28 February 2022, a NATO training operation in Ukraine, run by The United States, was to have trainees ready and some 60,000 troops prepared to invade and take over or destroy the regions of Donetsk PR and Luhansk PR, according to data and captured documents shared by the Russian Federation Ministry of Defence, but unconfirmed by other means except satellite images that confirms massive numbers of Ukrainian troops on the Donbass conflict line up to 24 February 2022.

Signing off, the women in Mariupol pleaded for everyone to make an effort to end this conflict and stop those who are cheerleading the war.