The Ukraine government has indiscriminately issued over 100,000 highly lethal unlicensed warfare weapons, some of an indiscriminate killing range, like molotov cocktails (IEDs), to civilians to use for killing Russians.

There are two main areas where the Canadian and American contribution of tons of hand-held weapons for Ukrainians, violate many laws. For one on America’s minor list, the weapons are being used by gangs of looters and rapists and women are being robbed, raped, kidnapped, and even killed with these weapons in the hands of the very many Kiev criminal gangs. Moreover, the US Congress has amended statutes such that the White House may not arm the neo-Nazi battalions in Ukraine, but it has done exactly that, and finally, the Geneva convention identifies civilians as armed combatants when belonging to a group that has been massively armed and has attacked its enemy. The “group” is all Ukrainian civilians, and the enemy is Russians in general.

The west has accused Russia of war crimes because its soldiers have fired back?

The 1949 Geneva Convention IV(Article 4, para. 1) sets out that “Persons protected by the Convention [as POWs] are those who, at a given moment and in any manner whatsoever, find themselves, in case of a conflict or occupation, in the hands of a Party to the Conflict or Occupying Power of which they are not nationals.”

In short, that means that ‘unprivileged belligerents’ or ‘unlawful combatants (UCs)’ who fall under the power of an enemy are not protected, explains Jelena Pejic of the Lieber Institute of West Point.

In this case below, Russians accused of firing at an automobile of “refugees”  saying they are not attacking civilians. But what were the occupants of the vehicle doing? Was it like this? Watch Video:

Arming Civilians is a Questionable Practice that has many complicated nuances. In the case of Ukraine in 2022, there technically are no civilians due to government declarations and actions. When does a combatant need to withhold firing upon an illegal combatant attacker?

The Chinese ambassador to the UN expressed alarm at the loss of civilian life in Ukraine and thanked countries including Russia for helping to evacuate its citizens.

“The West’s continual transfer of large numbers of lethal weapons into the hands of Ukrainian defenders may exacerbate its war with Russia, China‘s envoy told the United Nations, writes John Feng in Newsweek. The full article is here.

“With Russian President Vladimir Putin‘s military campaign nearing its two-week mark and his forces on the outskirts of Kyiv, the United States and its NATO allies have already supplied Volodymyr Zelensky‘s Ukraine with tens of thousands of precision weapons such as shoulder-launched anti-aircraft and anti-tank rockets—and many more are on the way,” wrote Mr. Feng.

FPMag has repeatedly published the dire warnings of experts who claim this practice of randomly arming civilians is dangerous, inhumane and unlawful in the cases where weapons are assigned to roving criminal gangs of looters and rapists because the act facilitates violent crime against the population; and in the case where the recipient of the weapons have not been properly trained and licensed in the use of the weapon(s) and lectured a warning on the extreme legal ramifications of becoming an illegal combatant or a lawful armed combatant in a war zone and the high likelihood of their being killed.

Arturo do Val, Brazilian politician from Koch-linked MBL, said he stood with Ukraine,flew to Slovakia & took selfies with molotov cocktails. Leaked audio shows him calling the border a great sex tourism destination. “Ukrainian refugees are easy because they are so poor,” he said. pic.twitter.com/PONTCzlllz

“Russia-Ukraine: Western media are acting as cheerleaders for war. Journalists are cheering on the arming of militias and civilians making improvised explosives – acts they usually treat as terrorism” @Jonathan_K_Cook 👇🏻https://t.co/TPkMbpAIak 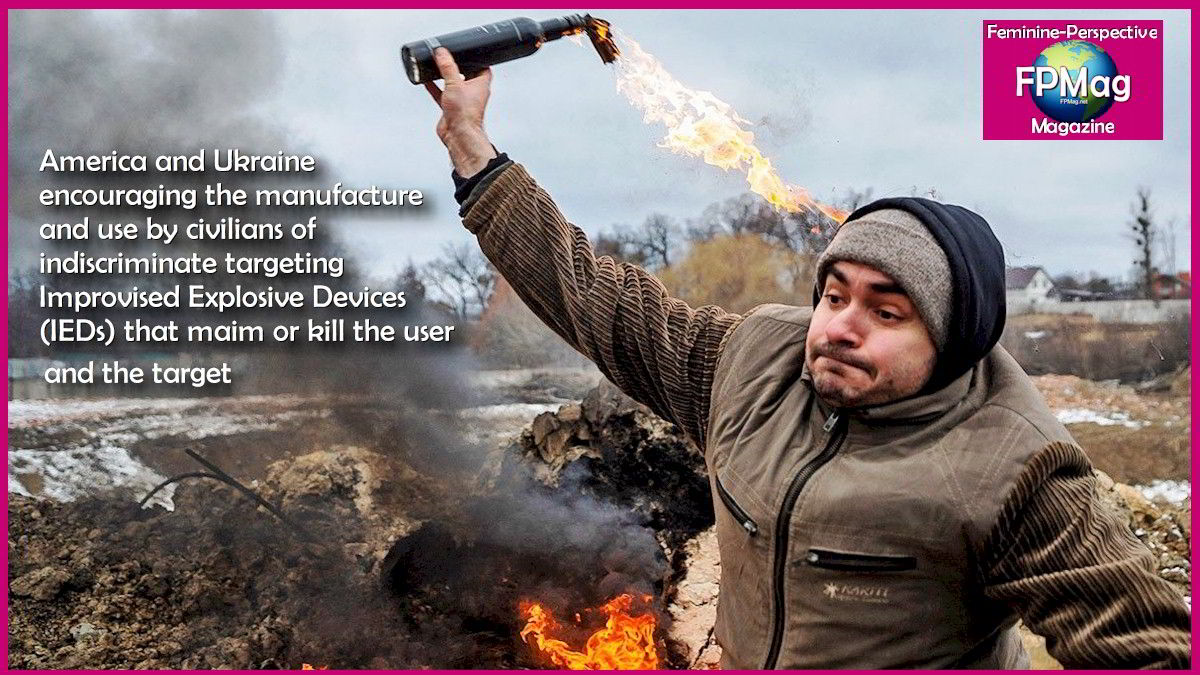 America and Ukraine encouraging the manufacture and use by civilians of indiscriminate targeting Improvised Explosive Devices (IEDs) that maim or kill the user and the target. Photo Art/Cropping/Enhancement: Rosa Yamamoto FPMag

Russia claims it has been saving civilians harmless and has offered a path of egress via the Russian border. Strong evidence indicates thousands have availed this offer.

Russian troops are not targeting civilians in Ukraine according to USA/NATO rules, protocols, conventions and law that sprang from the two-decades-old “global war on terror” according to information published by Cornell Law School.

The American-led resistance to the Russian “military operation” or more accurately described invasion of Ukraine has tended to exploit Ukraine overall. Arming Ukrainian civilians and making them cannon fodder was America’s idea according to numerous sources in Ukraine who have been speaking to television interviewers.

Failing to agree on this, after nearly five months of back-and-forth dialogue in which America ignored the Russian complaint, Moscow ordered the evacuation of Luhansk PR and Donetsk PR which Republics were being shelled by the Ukraine and US military since 2014 and then sent Russian troops across the border into Ukraine.

The claims of Russian Soldiers firing on Civilians is a mute point when technically there are no civilians under attack because the targets are carrying weapons or firing weapons cloaked in residential areas.

Russian soldiers claim from the top of their command echelons to have fired upon lawful and “unlawful combatants” in self defence or in the course of normal warfare.

“Unlawful combatants” is a term used to refer to individuals who belong to an armed group, in a context where either the individual or the group do not fulfil the conditions for combatant status. In short, that means armed civilians with RPGs, assault rifles, grenades and/or man-pack missile launchers and similar weapons which concomitantly are subject to return fire.

(b) “War crimes:” namely, violations of the laws or customs of war. Such violations shall include, but not be limited to, murder … of civilian population of or in occupied territory, murder … of prisoners of war or persons on the seas …
(c) “Crimes against humanity:” namely, murder, extermination … and other inhumane acts committed against any civilian population, before or during the war.

What is an armed ‘civilian’? Are they combatants when they do not wear a uniform or identify as a combatant or in the case of an occupation (of which Russia claims it has no intent), identify themselves by openly carrying weapons.

“Combatants are required to distinguish themselves from the civilian population while they are engaged in an attack or in a military operation preparatory to an attack.

A combatant who fails to distinguish themselves while engaged in an attack or in a military operation preparatory to an attack loses combatant status if they are captured, which means he does not have prisoner of war status and can be tried for an act of war.”

This “unlawful combatants” term was established by the United States. It was employed by the administration of USA President George W. Bush in the ongoing USA ‘global war on terror’ to describe persons who are, in America’s view, neither combatants nor civilians but belong to a third category of persons who can be attacked at any time and can be detained indefinitely without trial. It is also sometimes used as a synonym for “unprivileged belligerent”.

As Russian troops have reported shoulder-launched anti-aircraft missiles, rocket launched grenades and assault rifles being aimed from residential buildings all over the Ukraine, Joseph Biden, Vladimyr Zelenskyy and Jens Stoltenberg have been complaining that Russian troops have been shooting weapons at civilians.

Under the Geneva Conventions,  a collection of rules, agreements and protocols, notwithstanding what is true of any law or international agreement, the right of belligerents to adopt means of injuring an enemy is not unlimited, firing upon an assailant who is using a weapon capable of lethal force is acceptable self-defence practice under any circumstance.

There is no law that says that Russian troops may not fire weapons that are commensurate with the threat when under attack with indiscriminate weapons like grenade launchers or artillery mortars fired from within abandoned residential buildings or buildings that appear to be abandoned with the exception of the belligerents operating weapons.

“Western journalists’ difficulty containing their identification with, and support for, Ukraine’s civilian ‘resistance’ must be maddening to Palestinians in tiny Gaza”  Citing Russia-Ukraine: Western media are acting as cheerleaders for war | Middle East Eye. 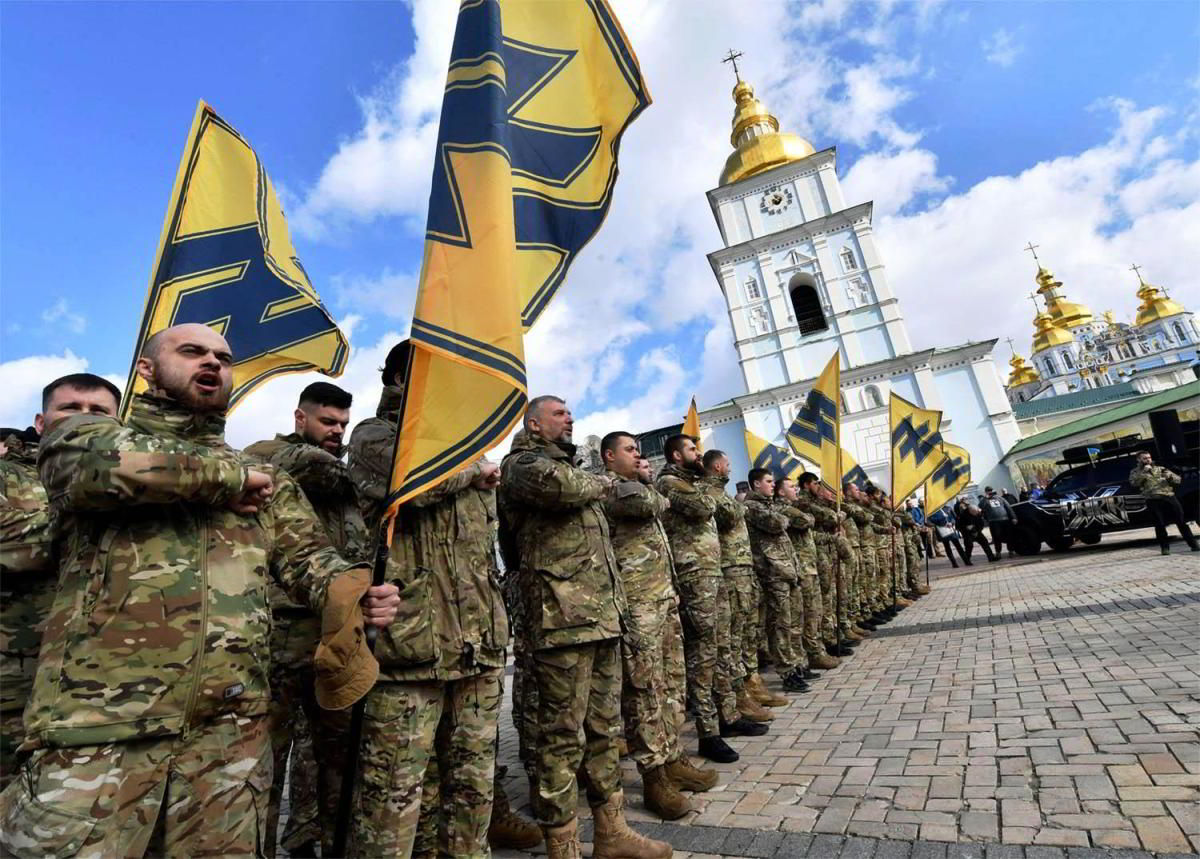 US House of Representatives approved a bipartisan amendment to the Defense Appropriations Act from Reps. John Conyers Jr., D-Michigan, and Ted Yoho, R-Florida that would block US training of the Azov battalion and other Neo-Nazi units and would prevent transfer of shoulder-fired anti-aircraft missiles to fighters in Iraq and Ukraine. Thus, according to RINJ Foundation medical humanitarian workers in the Donbass region “the Azov Regiment has all the American missiles it can carry”. Hence the White House is breaking US Law. “I am grateful that the House of Representatives unanimously passed my amendments last night to ensure that our military does not train members of the repulsive neo-Nazi Azov Battalion, along with my measures to keep the dangerous and easily trafficked MANPADs out of these unstable regions,” said Conyers. But the manpads just put a hole in an apartment building and blew out the other side of the building. The same has been done with anti-tank weapons. “The only way we got black African students out of teh Donbass area was by driving them into Russia,” explained Lana, a humanitarian worker who has been driving busloads of refugees from the Donbass region into Russia’s Rostov Region. Photo Credit: Source Supplied 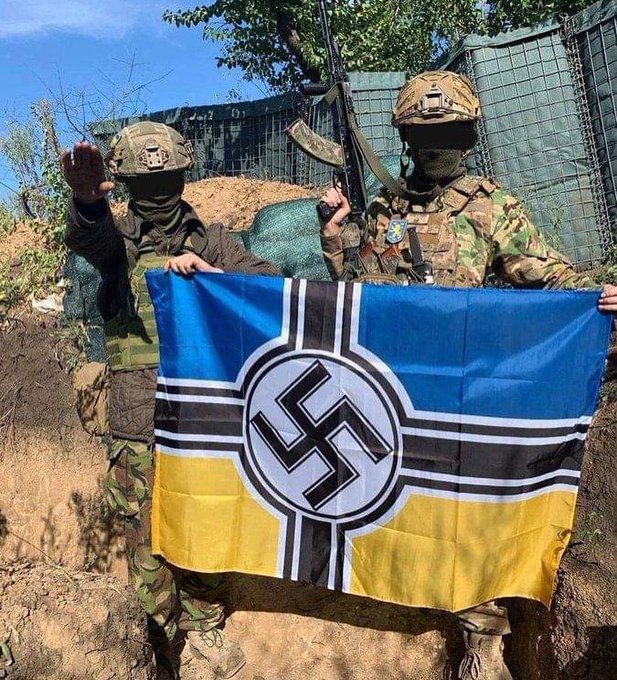 Official elements of the Ukraine Armed Forces are Nazis according to numerous sources.

The tricky business of arming civilians with RPGs, Assault Rifles, Grenades and Man-Pack Missile Launchers, people who do not identify themselves as combatants.

It is acceptable under the Geneva Conventions (1949)  to openly carry a weapon as identification as a combatant in exceptional situations (e.g.: occupied territories, national liberation wars).

Otherwise the combatant must wear identification (e.g.: a uniform) individually respecting the obligation to distinguish himself/herself from the civilian population.

The term “unlawful combatant” is used to refer to an individual who belongs to an armed group, in a context where either the individual or the group do not fulfil the conditions for combatant status. The term was employed by the administration of President George W. Bush of the United States in its ‘global war on terror’ to describe persons who are, in its view, neither combatants nor civilians but belong to a third category of persons who can be attacked at any time and can be detained indefinitely without trial. It is also sometimes used as a synonym for “unprivileged belligerent”.

Geneva Conventions and their Additional Protocols according to Cornell Law School

A true combatant is either:

or
a member of another armed group belonging to a party to the international armed conflict, fulfilling, as a group, the following conditions: