Editorial: All sides in USA war vs Russia in Ukraine, guilty of crime

Individual leaders have injected their own egos into a fascinating video game with realistic outcomes: real, dead, humans and mothers fleeing barefoot with babies in their arms.

As American spy planes orbit West of Odessa and along the Ukraine border with Poland, delivering attack coordinates to their advisors and Ukrainian troops on the ground, completely Forgotten are the 7.9 billion ordinary people who live on this dying planet, now growing hungrier than ever, in the cold dark.

The leaders who started this Ukraine war and keep it going with massive injections of their egos plus mercenary troops, bullets, bombs and missiles have all failed the best interest of the people they serve and the human race must be rid of them.

It is time to choose better leaders; stop the nuclear arms race; and spend our money on fruitful endeavors, not weapons.

Arming civilians is for a leader who knows he will lose the war. Armed robbers, looters, gang members and rapists will be the enemy’s crisis when it owns the country.

Each of these leaders has wrongfully sent attack weapons to Ukraine to feed the war and keep it going; indulged in acrimonious words and deeds to fire up the conflict; all the while urging Ukraine civilians to stay and fight all the Russians in their country.

None of these leaders have done what was needed to prevent war. They did not try but that is what these stinkers were hired to do.

Meanwhile civil society has been working day and night to patch up and evacuate ethnic Russians to the East and ethnic Ukrainians to the West.  From Ukraine to the Rostov region of Russia, trying to end the eight year genocide, go the Russian elderly and the young mothers with child. That’s what is really happening in this prolonged hate-filled Biden-fed war that has lasted some thirty years since the breakdown of the Soviet Union.

Missile Coordinates from American Spy Planes likely put this missile into the middle of Donetsk. 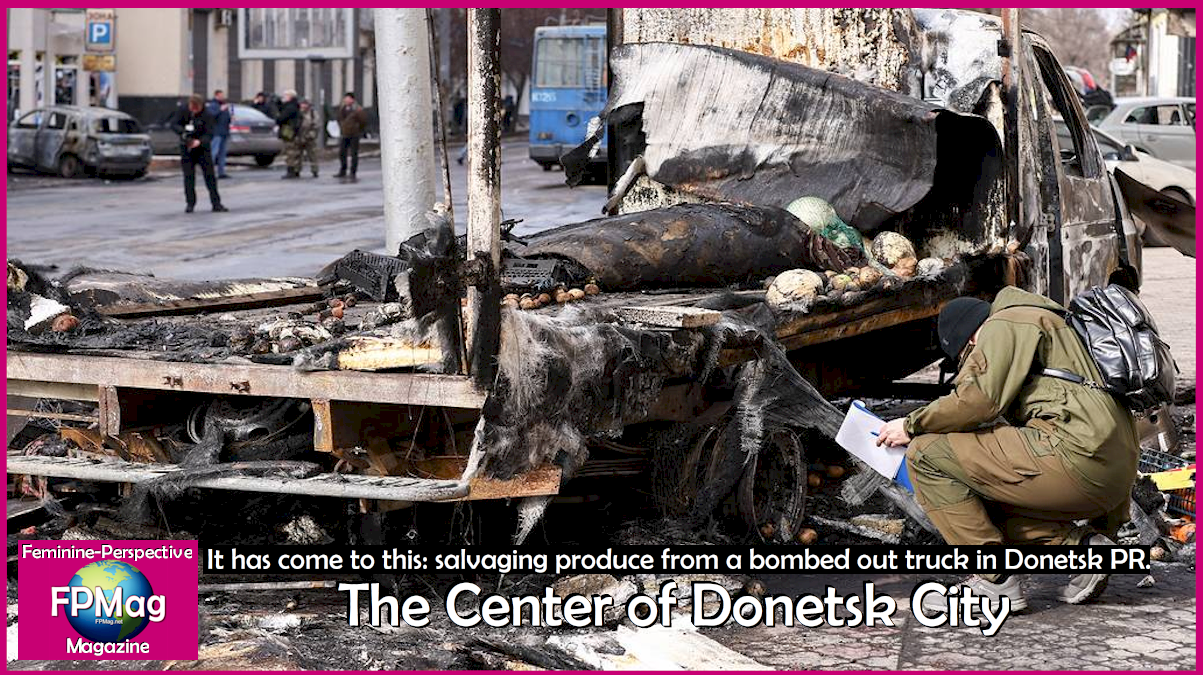 President Volodymyr Zelensky and his predecessor backed by America have been killing Russians in Ukraine for the past eight years to the tune of 1,750 per year on average. Recently he managed to put a Tochka-U missile equipped with a cluster warhead into the center of Donetsk. The rocket was shot down, but due to falling debris, according to the latest data, 23 people were killed, at least 18 were injured in the civilian center of Donetsk PR. Photo Credit: Mikhail Tereshchenko/TASS 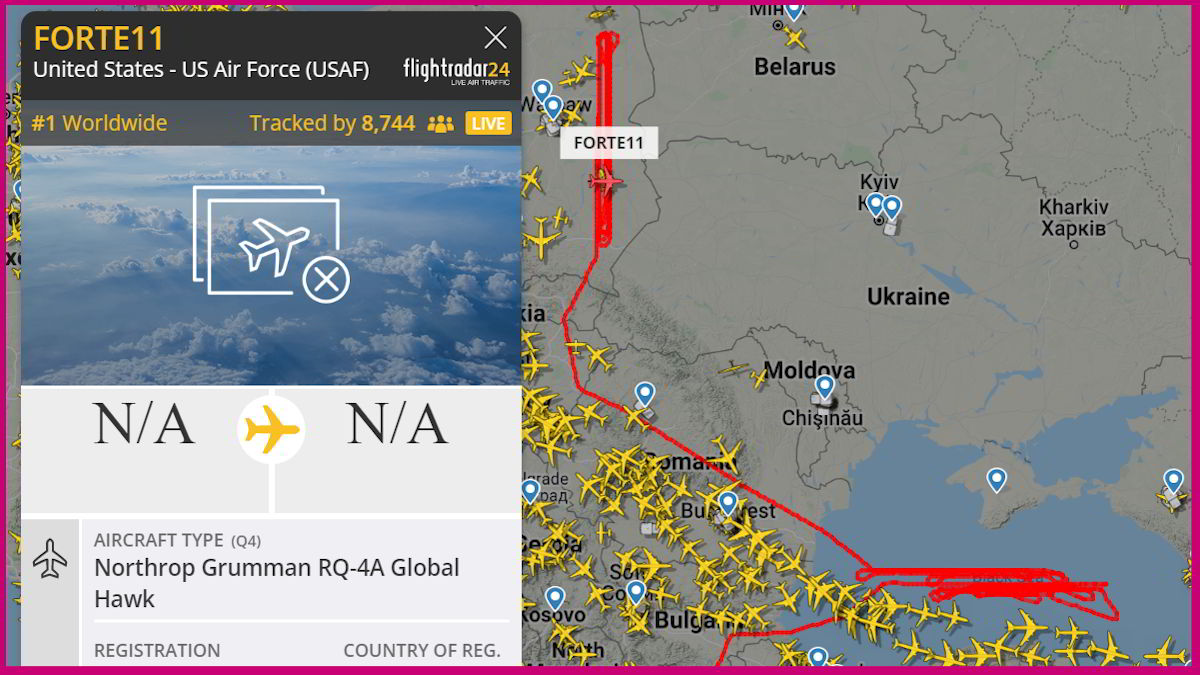 The Northrop Grumman RQ-4 Global Hawk is a high-altitude, remotely-piloted surveillance aircraft. It was initially designed by Ryan Aeronautical, and known as Tier II+ during development. The RQ-4 provides a broad overview and systematic surveillance using high-resolution synthetic aperture radar and electro-optical/infrared sensors with long loiter times over target areas. It can survey as much as 40,000 square miles of terrain per day, an area the size of South Korea or Iceland. ICAO 24-BIT ADDRESS AE541F
LATITUDE  50.5319
LONGITUDE  22.345 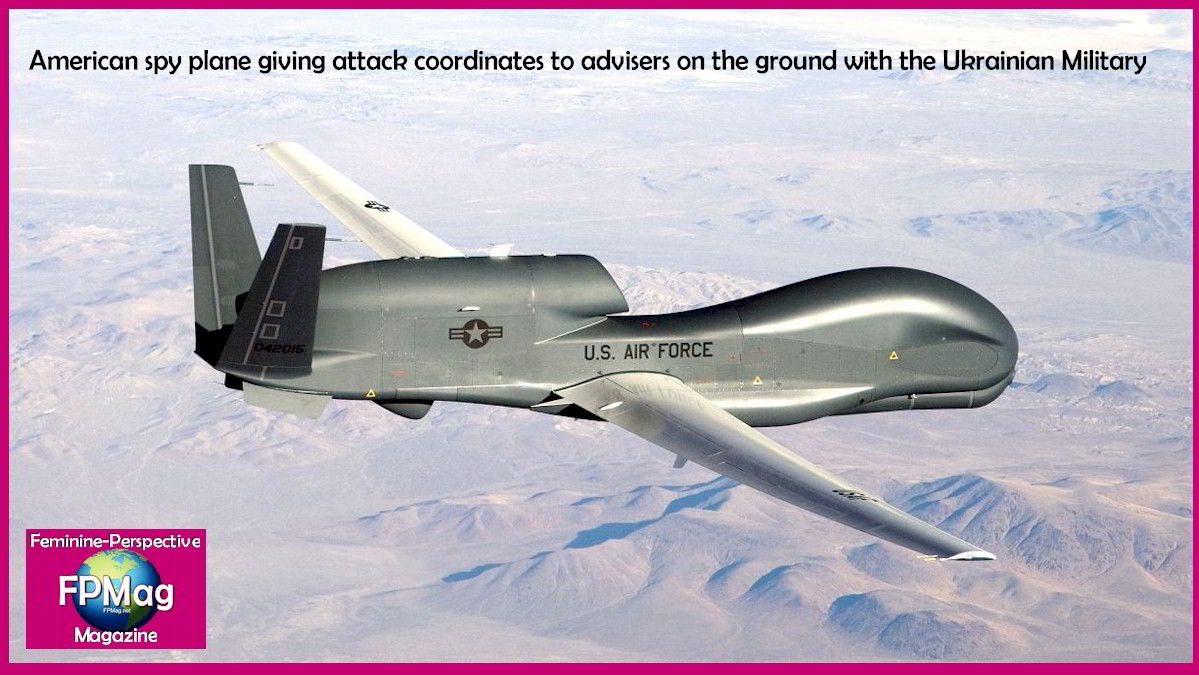 The RINJ Foundation and The Nurses without borders have ordered and facilitated 143 nurses to leave Ukraine. They will be shepherding patients and others across safe borders. It is no longer safe and no longer a worthwhile fight as we pass the threshold of nuclear war; as clinics and hospitals are bombed by all sides including the rapists among the Neo-Nazi militias in this Godforsaken failed state where women and children are unsafe beyond any reason. We are not going to lose any more lives as was the case in Myanmar. Every woman and child must leave Ukraine with the people now offering to help you depart.

Europe’s Kill, Kill response is reprehensible. The last bastion of decency has become Americanized and bloodied.

Why does it matter if the Donbass region is aligned to Ukraine or Russia when those millions of people are all dead?

This war should not have happened. Putin has been warning the West for years. “Red Line” he said and he had the right to say “Red Line” as NATO pushed to within a five minute missile strike to Moscow and had surrogates shelling the Donbass region.

The conduct of Europe is reprehensible. It is time to stop looking at Europe as an entity with a conscience and a concern for human development and global values.

The Europe Union is a big disappointment.

Joseph Biden and the Americans are everything the human race expected, blooded bullies.

Biden thought he could get away with as he protected his long-established dirty dealings in Ukraine and only risked Ukrainian and Russian Lives.

A smarmy sociopath US President is calling Vladimir Putin a ‘war criminal’, a ‘murderous dictator’ and ‘a pure thug’ like a mentally challenged dementia sufferer. Vladimir Putin is the guy with the most nuclear warheads in the world and clearly he is not in a good mood toward his enemies.

Estimates thus far of the human cost in lives this past month in Ukraine are nowhere near as high as the number of deaths the American mismanagement of COVID-19 has caused. Americans do not care.

There is nothing good whatsoever anyone can say about America’s proxy war against the people of the Donbass these past eight years. It has now erupted into a full scale regional war between Russia and the USA/NATO in Ukraine and it is going to get worse.

Enough very serious personal weapons have been shipped into Ukraine to arm every civilian in the country.

That is what the comedian-come-president Volodymyr Zelenskyy under the control of the White House, has done. This is a move of desperation under any circumstances but arming every civilian is also a move by a leader who knows he will lose the fight therefore arming every robber, looter, gang member and rapist in the country doesn’t matter because the enemy will own the country.

America threatens China and other nations if they do not condemn Russia. But all nations are suffering already. America had monstrous inflation at 2022’s start.

Sanctions backfire as food and fuel become rare and dear all around the world.

“Sweeping and indiscriminate sanctions would only make the people suffer. If further escalated, they could trigger serious crises in global economy and trade, finance, energy, food, and industrial and supply chains, crippling the already languishing world economy and causing irrevocable losses,” Xi said, according to China’s account of the call between Biden and Xi Jinping.

President Xi added: “The pressing priority is to keep the dialogue and negotiation going, avoid civilian casualties, prevent a humanitarian crisis, and cease hostilities as soon as possible.”

Biden used a telephone conversation with Xi Jinping to threaten China. White House press secretary Jen Psaki said, “The President detailed what the implications and consequences would be if China provides material support to Russia as it conducts brutal attacks against Ukrainian cities and civilians. And that is something we’ll be watching and the world will be watching.”

The Maniacs’ Ego Marches:
Biden Copies Trump in Show-Of-Force against all Critics 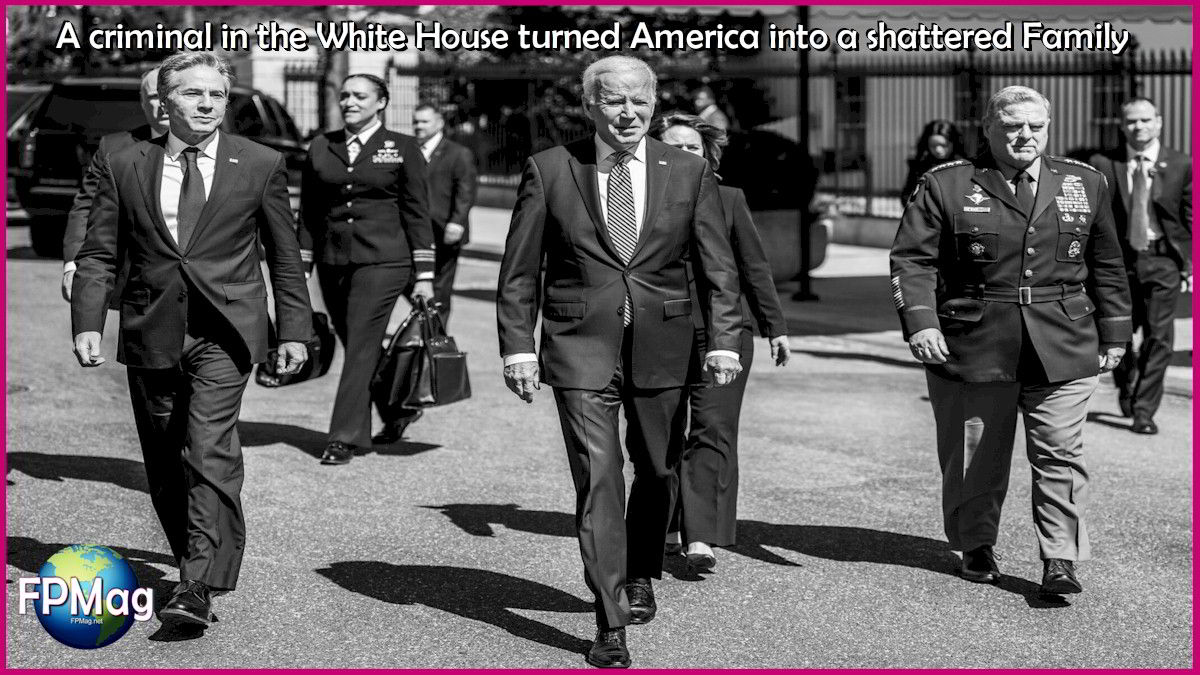 The picture nobody ever dreamed could happen. Manic Warring Criminals in White House Turned America into a Shattered Family suffering food shortages and soaring fuel prices plus the threat of nuclear war. 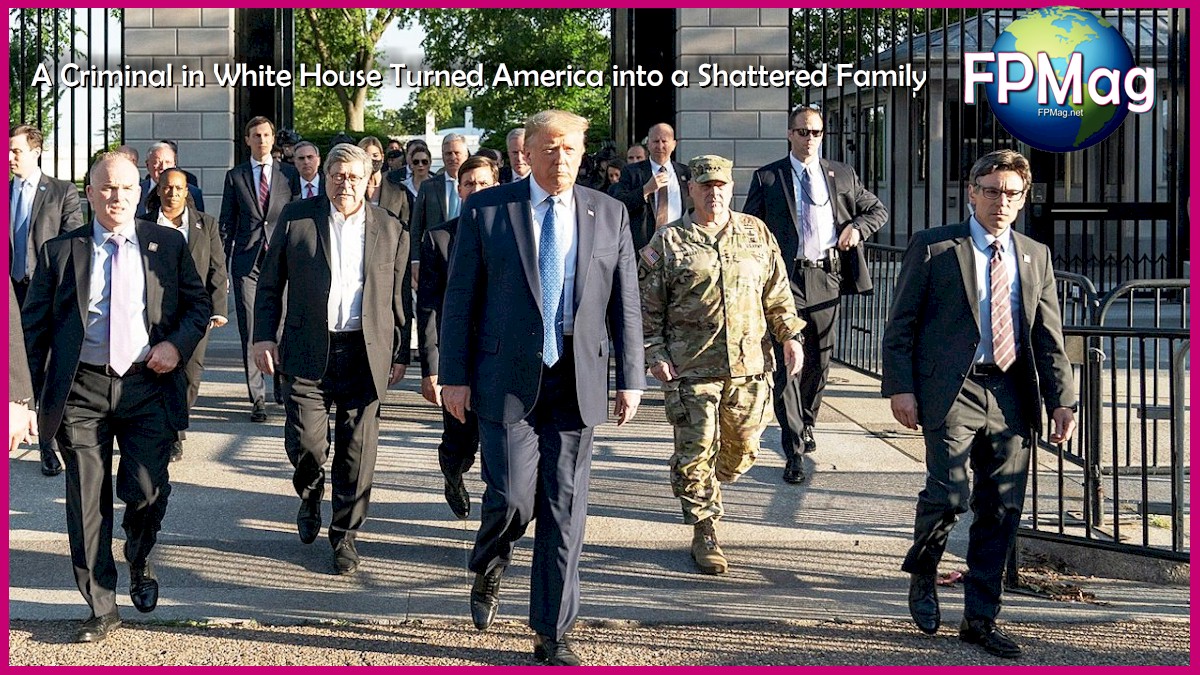 Talking heads join the video-game war in Ukraine, urging for deaths of Russians and applauding President Volodymyr Zelensky who says he will use the West’s weapons to fight the Russians until the last Ukrainian dies. That will not happen. Civil Society will help women and children leave Ukraine by every available means.

A $billion here a $billion there, the weapons are pouring into Ukraine as the streets fill with armed gangs of criminals and neo-Nazi militia startups. The most racist people on Earth now have automatic weapons and missiles. 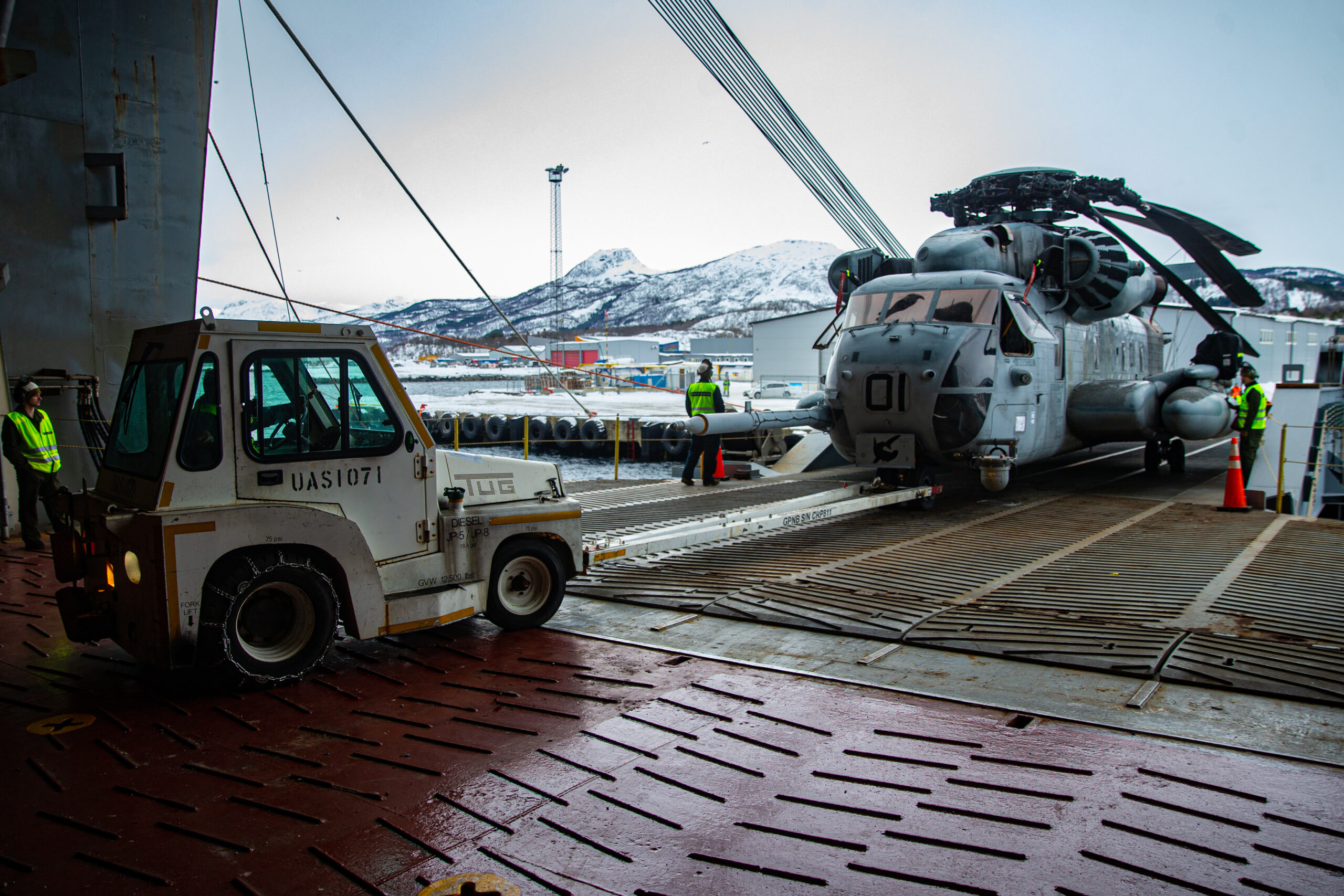 Sending 30,000 troops, 220 aircraft, and 50 warships for a NATO exercise on Russia’s Northern border is not the way to deescalate tensions in Europe.

Below: Anyone with a differing view to the White House is censored. This is war and it must be kept going so we can sell more weapons, say Washington DC’s strongest political backer lobbyists—The Defence Industrial Base.