Deadly Pathogens exist in Ukraine labs and must be destroyed

WHO or a UN-appointed expert agency must send a team with Russian and Ukraine cooperation to destroy all biowarfare-like pathogens in the country, safely and expeditiously. A ceasefire in the meantime would be appropriate,” says global humanitarian women’s rights and safety NGO.

This article will not find fault but indicates evidence that an immediate task of destroying deadly infectious pathogens in Ukraine needs to be undertaken.

Deadly pathogens may exist in all the biolabs across Ukraine, not just the ones Russia has captured. China says dozens more nations host these labs hence China and Russia have both said they want America to release all details.

FPMag has looked at this Ukraine side of a bigger story since 2016, deciding it was probably true but not capable of proof that deadly biowarfare-like pathogens existed. Now that the US State department has said it worries about their destruction and that Russia has captured the evidence, the matter is again under global scrutiny.

The pathogens exist in Ukraine within the labs according to Russian complaints and US officials testifying before the US Senate. These biolabs may be illegal in the USA therefore the US Government participates by funding labs under various descriptions in other countries in places like Wuhan for research purposes. Some parts of the Biden Administration admit the existence of labs containing pathogens, others deny this. 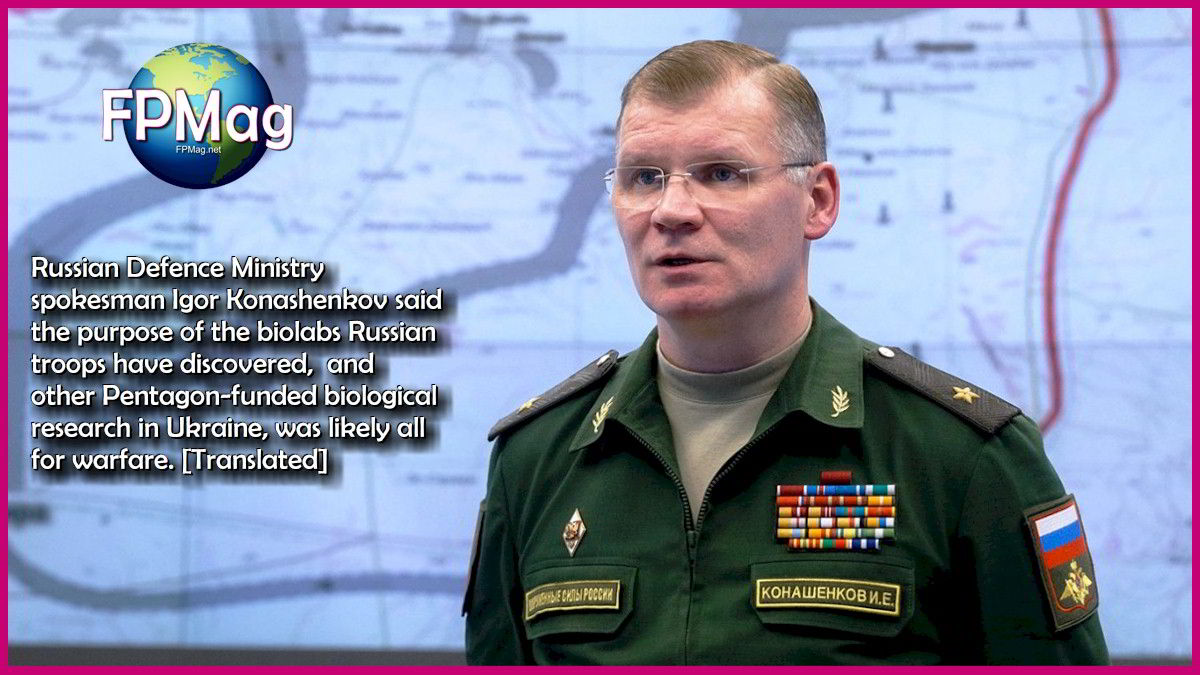 “Igor Kirillov, who heads the Russian army’s radiation, chemical and biological protection force, reported that a network of over 30 biological labs was formed on Ukrainian soil on the orders of the Defense Threat Reduction Agency (DTRA) of the US Department of Defense. According to him, on February 24, they were all instructed by the Ukrainian Health Ministry to completely destroy biological agents located in the laboratories,” according to Tass.

Undersecretary of State for Political Affairs Victoria Nuland agreed on 8 March to the US  Senate Foreign Relations Committee that the pathogens existed and that there were concerns the pathogens had not been destroyed.

“The Russian accusations are absurd, they are laughable and you know, in the words of my Irish Catholic grandfather, a bunch of malarkey. There’s nothing to it. It’s classic Russian propaganda,” Pentagon spokesman John Kirby said on Wednesday in a series of obvious contradictions to other USA officials.

China foreign affairs officials have said that there are 32 countries where programs similar to the one in Ukraine may exist and have asked that details of safety programs be released. It should also be noted that:

“During July 10-13, 2011, 68 participants from 32 countries gathered in Istanbul, Turkey for a workshop organized by the United States National Research Council on Anticipating Biosecurity Challenges of the Global Expansion of High-containment Biological Laboratories. The United States Department of State’s Biosecurity Engagement Program sponsored the workshop, which was held in partnership with the Turkish Academy of Sciences. The international workshop examined biosafety and biosecurity issues related to the design, construction, maintenance, and operation of high-containment biological laboratories- equivalent to United States Centers for Disease Control and Prevention biological safety level 3 or 4 labs. Although these laboratories are needed to characterize highly dangerous human and animal pathogens, assist in disease surveillance, and produce vaccines, they are complex systems with inherent risks.”  (Citing https://doi.org/10.17226/13315)

“We do not believe there are no biowarfare-like pathogens in Ukraine and they must be destroyed,” says women’s safety and rights NGO.

“A comical denial by a supercilious runt like Kirby is just one more ridicule added to the pile by American officials and does nothing to alleviate concerns for the safety of Ukrainians and the rest of the world from American malfeasance that has been suspected since 1969 when America probably pretended to have abandoned biological warfare research, under Richard Nixon who resigned from office on 9 August 1974,” explains Dale Carter, security director for the global women’s rights humanitarian group, RINJ Women.

“Just one mistake, for example the failure of power to a cryogenic refrigeration unit used for safe storage of infectious biowarfare-like pathogens, could be catastrophic to the world,” Ms. Carter said.

“It is our opinion that the World Health Organization should immediately send a team with Russian and Ukraine cooperation to destroy all biowarfare-like pathogens in the country, safely and expeditiously,” she added.

“Women and children in Eastern Europe have been endangered by the acts and words of evil men like Joseph Biden, Vladimir Putin, and Jens Stoltenberg plus supercilious administrations like the one in the White House administration. Destroy the biological warfare pathogens and end this stupid war that has only to do with patriarchal contests,” Ms. Carter added.

Credibility of the Biden Administration is at Zero

“This is no laughing matter,” says global women’s rights group.

The American narrative saying such labs do not exist is a disconnected lie based on semantics used by different departments, some saying they exist and others saying they do not exist.

“There are no U.S.-run biological weapons labs operating in Ukraine. These are public health laboratories to prevent the threat of outbreaks of infectious diseases (Like COVID-19?) part of the Cooperative Threat Reduction Program, which began in 1991 to reduce the threat of existing weapons of mass destruction programs in former Soviet Republics.”

America’s modern funding into research involving some of the pathogens used in experiments conducted by the USA for the 1943-to-1969 American Bio-Warfare Program terminated by Richard Nixon, has raised enormous controversy and the suspicion of repetitious lies.

The US State department has admitted the existence of the labs in Ukraine and claims they are part of the “US Department of Defense’s Biological Threat Reduction Program.”

“Obviously that story is full of holes, and very troublesome for humanitarians. The USA is a foremost ex-participant in biological warfare research. Since its government in 1969 allegedly withdrew from the BioWarfare Regime, it is still ‘messing around’ with biological pathogens for research purposes, all over the world,” says Kathy Poon, an infectious disease researcher in Singapore.

“If there is so much ‘prevention‘ investment and expensive research in so many countries, why is America the worst country on Earth in mitigating the COVID-19 Pandemic?,” the researcher asked rhetorically.

Here are the reported and estimated United States data for 2022-09-23 EST.

Source CSPaC.
According to the US Embassy in Ukraine which is now based in Poland:

“The US Department of Defense’s Biological Threat Reduction Program works with partner countries to counter the threat of outbreaks (intentional, accidental or natural) of the world’s most dangerous infectious diseases. The program fulfills its mission to reduce biological threats by developing a culture of biorisk management; international research projects; and enhancing the capacity of partners to strengthen biosecurity, biosafety and epidemiological surveillance. Consolidation and protection of pathogens and toxins that pose a danger are priority areas of the Biological Threat Reduction Program in Ukraine. Continue to assist Ukraine in strengthening and reporting Ukraine’s capacity to detect and report outbreaks of dangerous pathogens before they pose a threat to security or stability.

“The current executive agents of the Biological Threat Reduction Program in Ukraine are the Ministry of Health, the State Service of Ukraine for Food Safety and Consumer Protection, the National Academy of Agrarian Sciences and the Ministry of Defense.”

Using the World Health Organization definition, “biological weapons are microorganisms like virus, bacteria, fungi, or other toxins that are produced and released deliberately to cause disease and death in humans, animals or plants.”

“In order to study these pathogens, samples of the pathogens are needed. Such pathogens are stored in a number of different ways but also they may be in use at any given time in a lab that specializes in evaluating detection methods; prevention protocols; and eradication prospects to name only a few types of studies,” explains Dr. Harris, a biostatistician and infectious disease researcher with the Civil Society Partners against COVID-19,

“My preference is to be as far away from weaponized pathogens as I can get hence this is not my specialty, but I can help you with the basics. From what I know from peers who I have studied with, the development of bioweapons by the United States ceased before I was born,” he added.

“Then US President Richard Nixon, in 1969, pulled America out of the biological weapons regime. Some time later, in 1975 America signed two protocols the 1925 Geneva Protocol and the 1972 Biological Weapons Convention (BWC)—international treaties outlawing biological warfare. Recent U.S. biodefense programs, however, have raised concerns that the U.S. may be pursuing research that is outlawed by the United Nations.”

“WHO must send a team with Russian and Ukraine cooperation to destroy all biowarfare-like pathogens in the country, safely and expeditiously,” says global humanitarian feminist group.