The devastation in Mariupol has no excuse. The city is not recoverable any longer, say NGO female-health workers in Mariupol. Women and kids must get out.

“If ANY soldier tries to enter one’s home, get the shotgun and reject them, no matter what side they say they are on. Armed soldiers uninvited in a house are there for no good purpose and must be evicted using all available and reasonable force. If he or she needs a drink of water, they can drink outside. No excuses. Rape as a weapon of war is so common in this Ukraine war, more assaults on women and girls take place than bullets are fired into men according to our past experiences. The Ukraine War in 2022 is no exception. Welcome no soldiers to your home. They will rape women and girls,” says the leader of a security contractor now guarding Women NGO members and their local partners in Ukraine who stubbornly remain to assist the estimated 55,000 women and kids remaining in that city. (And because it is very difficult to get them out at the current time.)

Rape is a Russian and Ukrainian Weapon of War

Warning: Rape is a war crime in the context of this article. If you have been raped or feel triggered by this article, counselling is available here. If you are a person who has any information about such war crime, you could become a RINJ investigator with complete anonymity. To report your information visit “Investigators in the field identify persons accused of sexual violence in a war zone or trading in child sex slaves – (rinj.org)”

“An argument that sprang from dealing with the sex crimes of ISIS in Syria, Iraq, Afghanistan and worldwide to a lesser degree has come up again. Capture or kill rapists/murderers? Because bringing their case to any jurisprudence is a frustrating and dangerous exercise in futility. In war zones, our security people who are mostly experienced soldiers, or moonlighting cops, are accused occasionally of taking the short cuts,” explains Geraldine Frisque, official spokesperson for RINJ Women.

“Our security people say in response that when women investigators approach rapists in an act that is not contiguous to the events of the crime, like pursuit for example, the subject invariably responds with lethal force—because it’s a woman guard/investigator—and because of that, the rapist(s) ends up dead in the middle of a war to which he is a combatant and certainly a person who is using rape as a weapon of war. Hence some men have repeatedly accused our security contractor with ‘antagonizing perpetrators in order to kill the rapist(s) in self defence’,” she explained.

So what is the problem?

“Well, in areas where UN Peacekeepers are involved, it’s them who are the rapists. So our methodology only works in some areas and we are expected to allow for impunity in UN Cases. That sucks.”

Does the ‘methodology’ work in the Ukraine War to deter sex-offender criminals?

“Yes. Once combatants get the message that the female population is not present for their ‘R&R’ or for reprisals.” 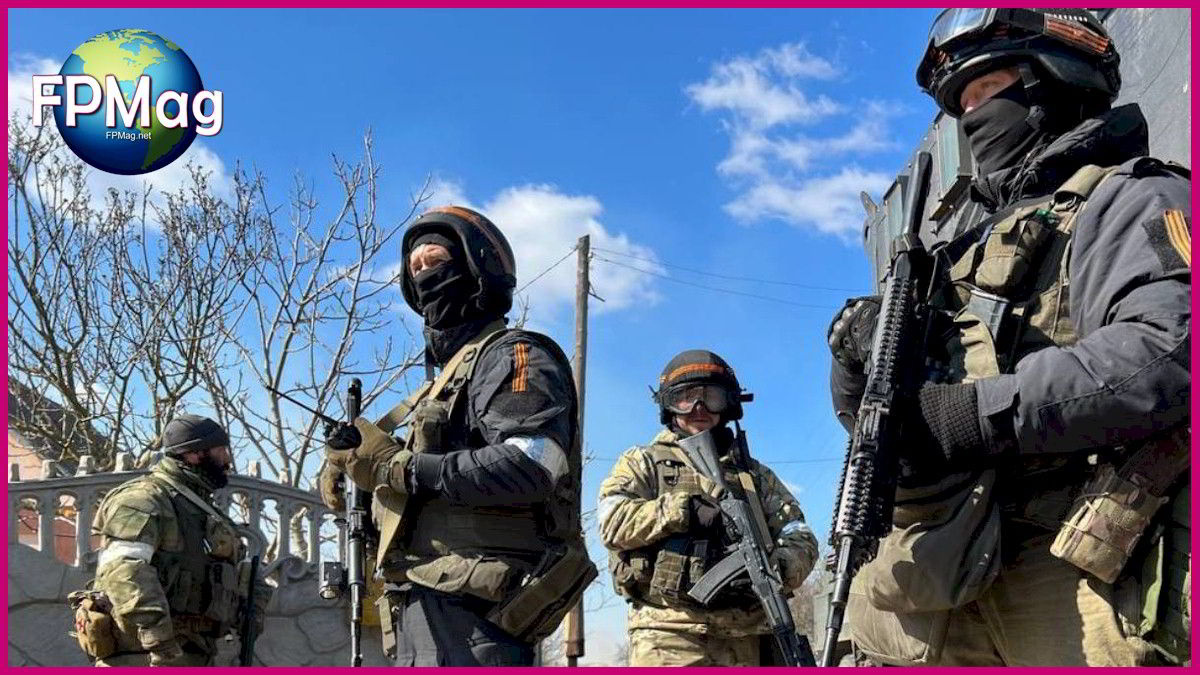 Armed soldier uninvited in a house are there for no good purpose and must be evicted using reasonable force. Rape as a weapon of war. Ukraine War 2022. Photo Credit: Source Supplied. Photo is cropped. Art/Cropping/Enhancement: Rosa Yamamoto FPMag

“In the East Slavic region which includes Russia, Belarus, and Ukraine, the men believe in the arcane macho-edict that “force rules”.

“Hence when one of our units in Mariupol was attacked on the weekend, it looked like a search and destroy mission involving seven Russians. In the block there were two birthing clinics because when the homeowners who opened their basement to us made it known to a family about 800 meters away, they invited us to use the whole house of the grandparents next door, down there. The grandparents, our workers had already evacuated. Because of all this, we had two security teams within one kilometer. The Russians were spread out a bit. The Russian troops entered three homes and raped the youngest girl in a family of four females in the first house. She was 12. That got the word spreading there was trouble. Using our peer-to-peer Blackberries to ‘security‘ we said what we knew and they connected all the dots and wiped out the Russian patrol in I think three houses. See. I am shaking to the bone by this,” Geraldine confessed.

“Three Russians were shot in a firefight with security outside that house where the 12-year-old-was raped. Four more were dragged out of homes, two were in their underpants. The security team leader arrived in an armoured vehicle and despite her being a fairly small Asian woman, she beat the hell out of the last Russian rapist to be dragged from a house, a really big guy, taking hit after hit from her feet—she was kicking the rapist repeatedly while he tried to out-muscled her, she was dancing on his head. The other three Russian rapists became unruly. They apparently tried to escape and were shot, I heard with a single round each from a female sniper on top of the 12-year-old’s home as they tried to flee down the street a few centimeters from where they were caught. I think we want to make that very clear, these Russian rapists died while escaping captivity and eventual prosecution, by a single shot from an over-watch Ukrainian Army guard. We apologize to the Attorney General of Ukraine that we could not bring these men the 960 kilometers to prison in Kiev,” she said with finality.

“The 12-yer-old is being treated for severe shock. We have everything we need to take care of her but a prayer would not hurt. This is a bad case.”

“Within hours, our security people had a different team go find where this Russian  patrol had come from. They blew up two tanks killing three attackers in each one and then ‘security’ had to flee because the Russian response was enormous, overwhelming, even, they said,” explained Ms. Frisque.

“Male fighters and general criminals in the 2022 Ukraine war, on both sides, are reputedly among the worst rapists in the world. Rape as a weapon of war is a common practice by all sides and has been for the past eight years in the Donbass region and nearby Crimea. Today, rape is an epidemic in Ukraine,” Ms. Dale Carter confirmed from the Eastern Ukraine region in a Signal text message. 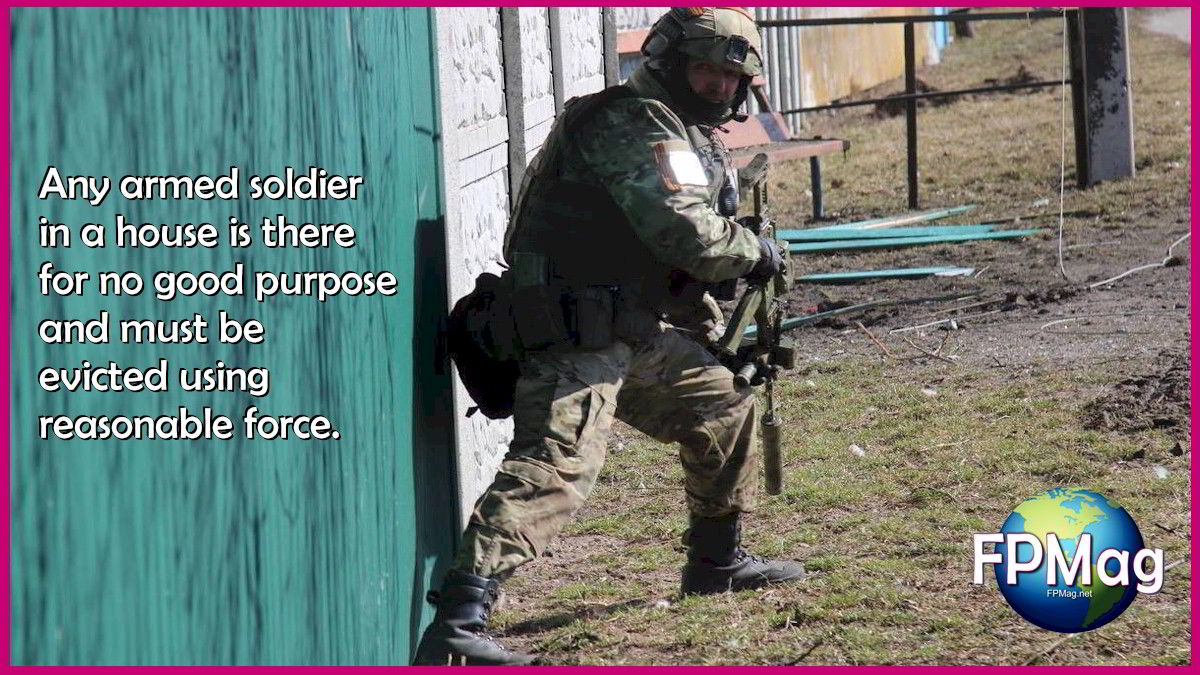 Armed soldier uninvited in a house are there for no good purpose and must be evicted using all available force. Rape as a weapon of war. Ukraine War 2022. Photo Credit: Source Supplied. Photo is cropped. Art/Cropping/Enhancement: Rosa Yamamoto FPMag

The numbers of reported rape cases in Ukraine is a false indicator even  though it is very high. Generally rape goes unreported in Ukraine.  Supporting the assertion is 1% HIV infection rate of the population of Ukraine in an environment where people generally refuse to get tested,” explains Geraldine Frisque, official spokesperson for RINJ Women.

Remember Oksana Makar, RINJ Member since 2010, raped and murdered in 2012.

Alona Adamovich who operates the RINJ birthing clinics and women’s shelters in Mariupol for The RINJ Foundation  is demanding that a complaint be made to the United Nations about the occurrence of rape of women and children in the Mariupol region of under-siege-Ukraine.

“The Commander in Chief of the Russian Federation has all but invited Russian troops to rape women and girls in Ukraine by citing Punk-Rock era band ‘Red Mold‘ song ‘Sleeping Beauty in a Coffin’ with the lyrics he quoted, ‘I crept up and f****d her. Like it, or dislike it, sleep my beauty‘. No wonder that sh** is blaring from their armoured troop vehicles,” Alona Adamovich said according to the information Ms. Carter reported from the area when she was able. Communications there are disastrously bad.

“Alona is a holdout, a regional director who when Mariupol’s society collapsed, still refused to leave when many of her coworkers were evacuated. She is operating with 12 local workers, nurses trained at a medical school in what was once known as the Luhansk Oblast and now part of the new (since 2014) Luhansk Republic,” explains Ms. Frisque. 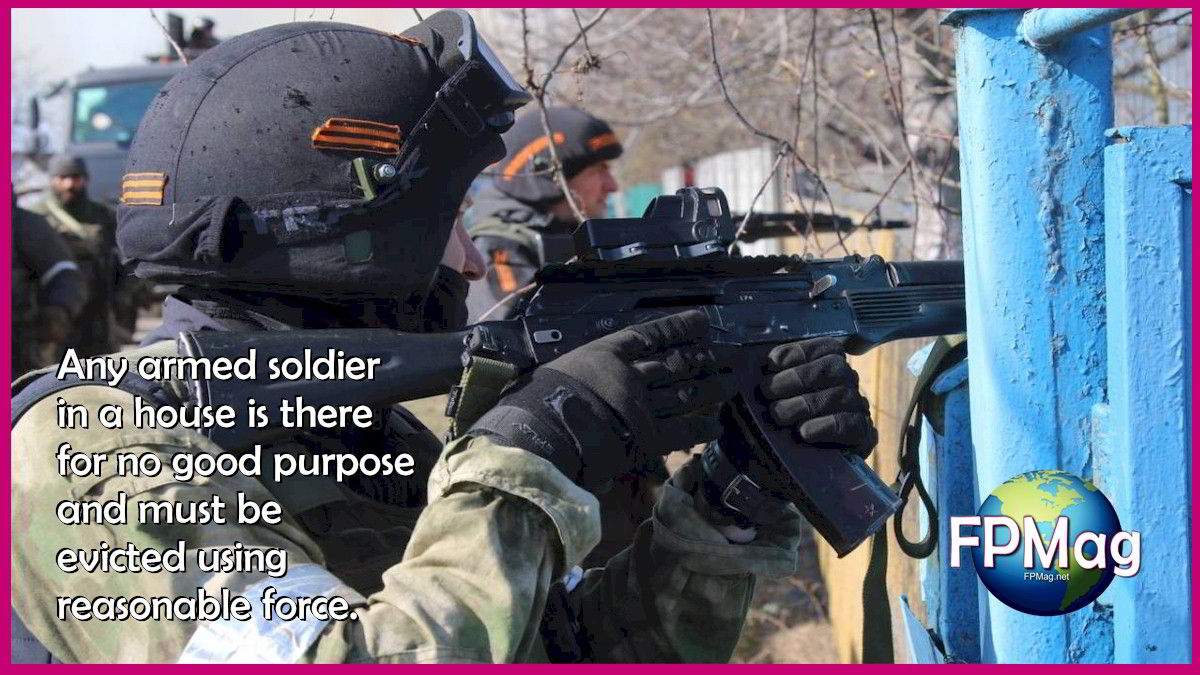 Soldiers invading homes: Get the shotgun or they rape the women. Armed soldier uninvited in a house are there for no good purpose and must be evicted using all available force. Rape as a weapon of war. Ukraine War 2022. Photo Credit: Source Supplied. Photo is cropped. Art/Cropping/Enhancement: Rosa Yamamoto FPMag

Regional Director Adamovich is taking care of patients escalated to specialized women’s care by local doctors. The numbers of patients in need are not dropping, according to Dr. Nassima al Amouri  who is now in Kiev by special request of the regional director of the East Slavic region to come and write some new and region-specific medical directives and also to train some nurses in Gender Based Violence response and certification, explained Ms. Frisque.

“Our Security People now admit to 58 kills in Mariupol, all but a few of which were casualties when they attacked women’s shelters and birthing clinics or stalked women and girls seeking medical assistance. The exception is the reprisals against a military convoy that sent troops to have some leave in a residential neighbourhood by raping women and stealing their food. A few of the 58 casualties were extremist militia members who sprang up when the government gave away free guns and grenades to everyone, including looters, rapists and street gangs,” explains Ms. Frisque.

“The combatants learn about our clinics’ whereabouts in Mariupol from girls they beat up—girls who have received birth control procedures or prescriptions. Every clinic location has three guards to allow for shifts and breaks 24/7. The guards are highly skilled women and have years of experience. They sleep and live on premise in these basement GBV medical support units and screen all patient intakes,” said Ms. Frisque.

“The guards also bond very naturally to the female-only medical practitioners they support and yeah, they would take a bullet for any of our workers. It’s a two-way street. Our medical workers provide ongoing care for all our security contractors and that is what we call a ‘fist-to-heart-engagement‘.”