ASEAN shuns American abuse like it is mycobacterium leprae. But no Z.

As roughly 20% of the brutal Russian troops nearby Kiev, Ukraine head back to Belarus in the past 24 hours since the Istanbul talks, the US Pentagon is panicking, saying that Russia is not really withdrawing from the area but “repositioning” despite satellite images showing Russian troops returning to Belarus and news stories about the troops being welcomed back to Belarus.

In that light, US President Joe Biden has failed to woo ASEAN leaders, most of whom are astonished by what is in a de facto sense the America-vs-Russian war the USA is fighting on Ukraine soil since 2014, as at least the Philippines has acknowledged, slaughtering Ukrainians and Russians in the process. 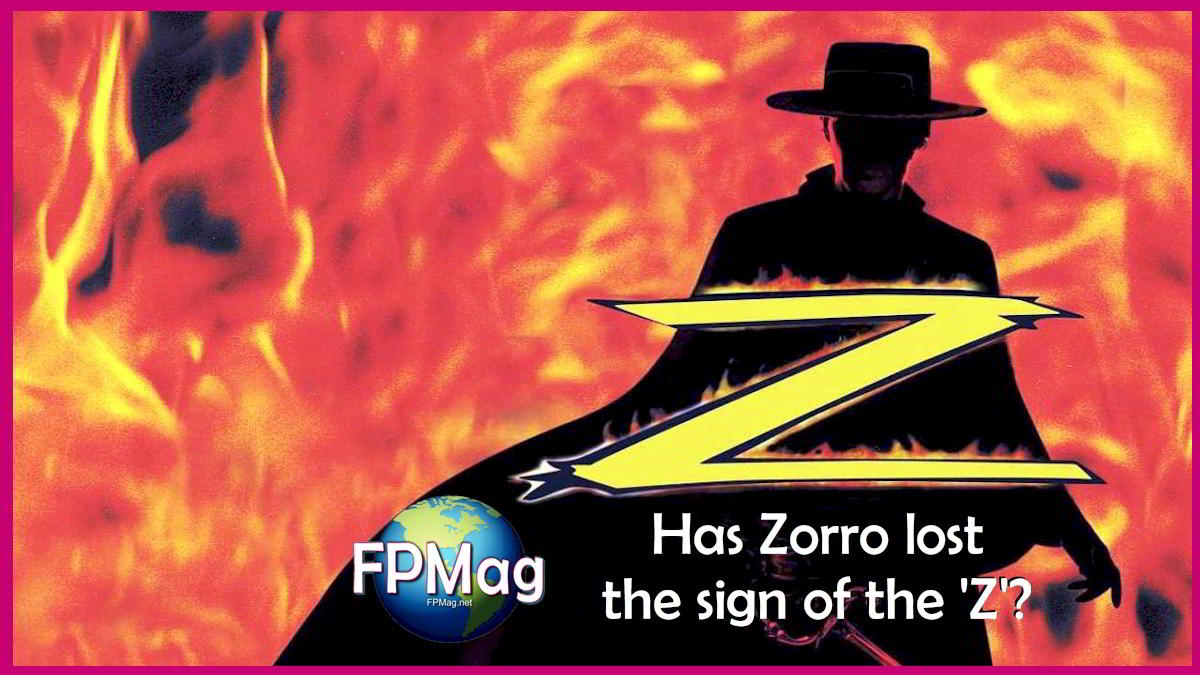 The return to Nazism in Germany is evidenced in the criminalizing the use of the letter Z as a signal of vague support for anything Russia. Does that include support for Don Diego de la Veg (Zorro)?  Art/Cropping/Enhancement: Rosa Yamamoto FPMag

“Americans do not see the both sides of the story, only American propaganda driven by the heavily political Democrat Party-sponsored news media,” says Karina Angeles in Manila who has been heading up a brief poll across ASEAN nations.

Russia’s staged withdrawal from Kiev, according to William Taylor (74), a former US Ambassador to Ukraine who helped Democrats impeach Donald Trump, who in his usual interview on CNN was calling “Russian misinformation.” His segment started around 3:00pm Wednesday, Eastern time in the USA. That broadcast was not available on CNN International in ASEAN nations, just America. Meanwhile more Russian troops have entered Belarus from the Kiev area according to eyewitnesses and newscasts in the ASEAN region.

Ukraine has drawn attention to American-built biolabs in the Philippines

“The US [in addition to P4 labs] also has 1,495 P3 labs, not including many other labs it built in territories of the former Soviet Union, like in Ukraine and Kazakhstan, and in many other places around the world like the Philippines. The US has been the only country that has blocked the resumption of negotiations on a verification protocol to the Biological Weapons Convention,” remarked Chinese Foreign Ministry spokesperson Hua Chunying, in May 2020.

Sharon Santiago reports that Filipino women say they are angry at America in the Philippines because Americans have deadly infectious pathogens a.k.a. “biological weapons” under study at Black and Veatch-built biolabs run in conjunction with the Pentagon in the Philippines, according to news coverage by China media outlets and documents emerging in the discussion about controversial American pathogen studies in Ukraine.

“Because of doubts raised over the Ukraine situation women are planning to bring this matter up with presidential candidates in the Philippines election,” reports Sharon Santiago.

Some Filipinos have urged President Duterte in mid-2021 to stop the American Biolabs. “The funding agency for the PH DA agricultural labs have clear overt and covert military objectives in the Philippines which may not necessarily align with the civilian, even military objectives of Manila,” says a public policy think-tank focusing on major public infrastructure and development projects in the Philippines. ” Does the US have covert objectives in undertaking these projects in the Philippines, especially since the Tarlac biolab is just the first in a series of integrated laboratories planned by the DTRA.”

Despite the malleability for censorship  of Google, YouTube, Bing, Twitter and Facebook in the realm of politically inspired censorship (Facebook even approves hate and death threats toward Russians), the United States has been unable to completely restrict media coverage for 680 million Southeast Asians—the news coverage of the Ukraine War since it began in 2014.

“It’s part of our territorial defence,”  Colonel Ramon Zagala, spokesman for the Armed Forces of the Philippines told Aljazeera in January 2022. For many years,  the Philippines has accused China of violating its exclusive economic zone (EEZ) by sending hundreds of militia boats into Philippines’ territorial and EEZ  waters.

Philippines has wavered on Ukraine Issues

Philippines President Duterte has wandered around on the issue at one point saying he wanted the Philippines to stay neutral. But the Philippines foreign office released a statement that contradicts the outgoing President.

“President Duterte himself is accused before the International Criminal Court of ordering extrajudicial killings that may have allegedly amounted to over 27,000 or more deaths according to substantial reportage on the matter. Reports from Ukraine do not [at the time of publication] suggest war deaths anywhere near the number of people [Duterte is accused of allegedly killing] in his so-called drug war against his people, so perhaps Mr. Duterte may not be impressed,” Karina Angeles commented cynically.

“The Philippines votes ‘Yes’ to the UNGA resolution and expresses explicit condemnation of the invasion of Ukraine. No one can trust news reports of casualties on either side but 14,000 have been killed since 2014,” the statement read, implying that the Russian “military operation” is part of an ongoing conflict since 2014, which is how most Filipinos, particularly the many who have worked in Russia and Ukraine, see the conflict.

ASEAN Nations do plenty of business with Russia finding the country to be a reliable trading partner.

According to Minh Son writing for The Diplomat, “For Vietnam, the timing of the conflict could not be more awkward: it comes three months after Hanoi and Moscow celebrated the 20th anniversary of their comprehensive strategic partnership and barely two weeks after the 30th anniversary of Vietnam’s relations with Ukraine. Caught off guard by Russia’s sudden aggression against one of its comprehensive partners, Vietnam finds itself in a diplomatic bind.”

Joe Biden‘s bullying demands of other nations to hate Russians are not welcome say numerous diplomatic and political sources within the ASEAN group of nations including Singapore despite Lee Hsien Loong’s lonely but enthusiastic embrace of Biden‘s Russophobia which is not universal in the tiny nation of Singapore.

That is not to say that anyone agrees with the Russian Army’s brutality according to an FPMag straw poll. “But you need to be a total ‘a$$w*pe’ to bring your people to war against the rough Russian army like that Ukraine guy did when the Russian Army was lined up for nearly 10 months saying stop bombing Donbass or we will kick your a$$,” explained a Colonel military attaché in the Philippines AFP who does not obviously wish to be identified due to his frankness and lack of permission to speak on behalf of the Duterte government but it is also likely he knew what Duterte would agree to and would not agree with unofficially.

The March 28-29 US-ASEAN meeting “has been officially delayed indefinitely due to scheduling clashes with some Southeast Asian governments” say ASEAN officials.

Individuals who display the letter “Z” in Germany to symbolize support for the America vs Russia war in Ukraine could be liable to prosecution, an Interior Ministry spokesperson has said two days ago.
Southeast Asia is not Z-ing says a poll of medical workers in the ASEAN nations. Photo Credit: Courtesy RINJ Foundation/Germany.  Art/Cropping/Enhancement: Rosa Yamamoto FPMag

Unlike Americans, Asia sees two sides to the story.

680 Million ASEAN Nation civilians are able to easily see in the media that Ukraine has been bombing and shelling residential buildings of ethnic-Russians in the Donbass region including the Luhansk People’s Republic and the Donetsk PR since May 2014.

Donetsk City in the Donetsk People’s Republic Ethnic Russians Shelled by Ukraine Forces 30 March 2022 in a war on Donbass that has continued since 2014. Photo Credit:

“What this information says is that both sides behave ruthlessly toward each other and that the America vs Russia war on Ukraine soil is killing an enormous number of ordinary people who have no stake in the matter. It’s disgusting, agree most people, across ASEAN,” says nurse Karina Angeles in Manila who agreed to conduct a straw poll among her OFW worker colleagues in the ASEAN countries.

Welcome to Mariupol where fighting has been building to building urban warfare between Russian regular forces and the neo-Nazi Azov Brigade of the Ukraine Armed Forces.

“Asians are seeing full reporting from the American side and the Russian side in the America vs Russian war in Ukraine. The Americans are looking like the deadly bullies we have come to know them to be,” says Karina Angeles from Manila after conducting a survey among nurses across the nations of ASEAN.