Some parents are furious, saying many of their children’s lives could have been saved. “Gunshot wounds in children must be treated immediately. Wait-and-watch won’t work,” says investigating war zone surgeon.

Ten days ago, on 24 May 2022, a lone, troubled teen named Salvador Rolando Ramos fatally shot nineteen young children and two of their teachers, also wounding seventeen other persons at the mostly Hispanic Robb Elementary School in Uvalde, Texas, United States, some 65 miles west of the Mexican border and an hour’s drive from San Antonio.

But an eighteen-year-old teen killer entered an unlocked side door by which he bypassed all security ID checks, which were in place and functional at the time.

Some two dozen local police officers milled around in a crowd of worried parents, some of whom had been texted by their children about the horror unfolding.  Cops were using force on some nearly hysterical mothers urging for police to help save their children. 911 Calls from children inside the school urgently requested police support, saying “there are only 8-9 children left alive” in one case, and “please send police” in at least six instances, according to Steven McCraw, director and colonel (?) of the Texas Department of Public Safety.

“Between 11:31 a.m. and 12:58 p.m. on 24 May at the Robb Elementary school in Uvalde, children with bullet wounds were beginning to accumulate on the floors of their classrooms as best as we can tell from the information from numerous sources,” said Dr. Nassima al Amouri, a medical Director for The RINJ Foundation, which operates women and children shelters and clinics in war zones.

Dr. Nassima al Amouri is a war zone trauma surgeon. She was asked last Tuesday by FPMag to research the Uvalde, Texas matter and answer the question, “could children’s lives have been saved if first responders were able to stabilize and transport patients to the hospital more quickly?”

Monique Deslauriers, a nurse practitioner and executive director of The RINJ Foundation in the United States went from Calais, Maine to San Antonio Texas to begin an investigation, before going on to Uvalde, working with Dr. al Amouri and her staff.

“Of the 38 persons suffering gunshot wounds by Mr. Ramos, 21 are deceased,” said Ms. Deslauriers in a preliminary update report.

“In my years of medical and surgical experience in Syria and Iraq wars, I have learned that right-angled, high-powered military rifle gunshot wounds on small children enter and exit the child’s body can cause potentially massive internal bleeding. Angular entry wounds are unpredictable, but often leave the bullet inside the body which may add complications,” added Dr. al Amouri in a preliminary response.

“With urgent care, death from many types of gunshot wounds in children can be prevented,” she added.

The picture and its story. Jacklyn Cazares is deceased along with her cousin Annabelle Rodriguez. Could surgeons have saved these children if these patients were transported an hour earlier? The first 911 call came in at 11:32. The shooter was dead at 1:00pm.  “If the gunshot patient is alive in my O/R after 20 minutes since injury, I have a likely chance at preventing death,” says highly experienced trauma surgeon experienced with gunshot injuries. 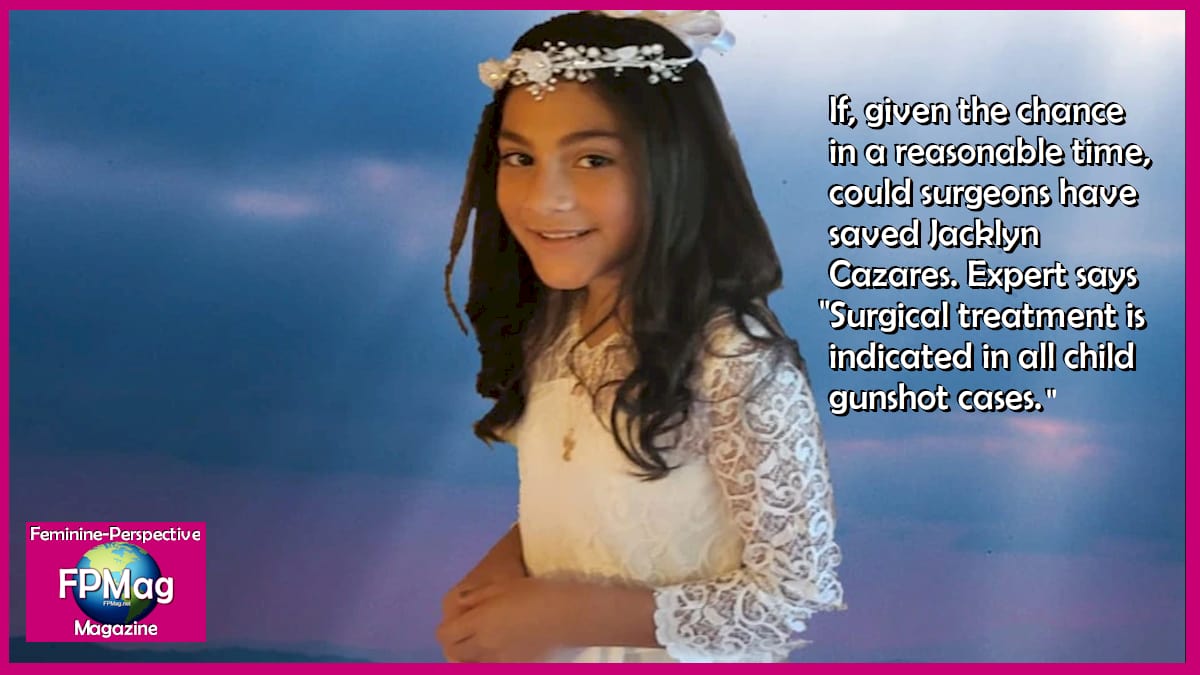 If, given the chance in a reasonable time, could surgeons have saved Jacklyn Cazares, a gunshot victim at the Robb Elementary School on 24 May, 2022? The father of Jacklyn Cazares, 10, murdered in the mass shooting at Robb Elementary School in Uvalde, Texas on Tuesday, May 24, has demanded a justification as to why the gunman was able to make it through the school for 90 minutes until he was shot dead even though the first 911 call came at 11:32 am, and yet Ramos was not shot until 1 pm Expert says “Immediate surgical treatment is indicated in all child gunshot cases.” Photo Credit: Facebook. Photo is cropped. Art/Cropping/Enhancement: Rosa Yamamoto FPMag

“Both trauma and loss of blood can lead to life-threatening shock in children, therefore the risk of rapid death is two-fold in general terms and the urgency for immediate stabilization and surgical intervention can be extreme. We have saved the lives of children under the most daunting of circumstances by sticking to the proper protocols and medical directives for fracture stabilization, vascular surgery, osteosyntheses, laparotomies, thoracotomies, etc. as they apply. I have even begun wound irrigation and surgical prep procedures in the back of an ambulance as we headed for my O/R. That’s the kind of urgency I am expressing. We had a day once when ISIS shot up a classroom of children not far from one of our small hospitals. I had some of the best surgical women doctors and nurses on my team and out of nine gunshot wounds we did not lose one child. And that includes fragmented round injuries and even deep wounds where debridement, fasciotomy, and constant post-surgery drainage are indicated. Not one death, thanks to God and my team. Gunshot wounds to children must be treated with nearly insane urgency. There is no cause for wait-and-see practice. Some of those kids required multiple surgeries, and some were on operating tables with a blood donor hooked up in a cot right beside them. That’s the kind of URGENCY these bully cops in Texas using force on scared parents need to learn [translated],” said Dr. al Amouri in a phone call.

“Which lives could have been saved? At least we could have a chance with those children who were still breathing after twenty minutes. This I know from many hundreds of case experiences. This is why I am so adamant on the urgency and universal protocol of ending conflict and transporting the gunshot cases and other injuries forthwith.”

“Looking specifically at likely cases laying on the floor of class 111 and 112, complications caused by trauma to an internal organ exacerbate the victim’s condition in varying degrees. I still insist that a live patient after being transported in 8 to 25 minutes
c a n    b e    s a v e d,” the surgeon emphasized.

“Immediate surgery is indicated in all gunshot cases particularly deep, center body gunshot wounds. Seconds, minutes, make a difference. I want the patient ready for total life support in an instant and then get to work on surgically resolving the traumas and then closing and administering ultra-critical care.

“At the scene, the bleeding must be stopped with intense pressure and the patient transported in an ambulance within five to eight minutes at the scene. If the patient is not attended by trained EMS crews, a gauze or cloth compress under heavy pressure on the wound, sufficient to stop the bleeding, is better than an improvised tourniquet. Transport the patient to a ready surgical resource.

“From the outset I must say that if this turns out to be unmitigated fact, police allowing the wounded child-victims to lay around for an hour or more, bleeding out, is reckless, irresponsible, negligent—a mass homicide by cops and other authorities.

“The closer I look,” said the doctor, “the closer anyone looks, a horrific mass murder is revealed, with law enforcement complicit in many needless deaths of small children.”

Twenty seven of the 228 mass shootings in the USA in 2022 have been at schools.

Since the Uvalde mass shootings, there have been 18 new mass shootings to date, according to Chris Murphy, a USA Senator from Connecticut and a report in Newsweek.

“Six of the nine deadliest mass shootings in the United States since 2018 were by people who were 21 or younger, a shift from earlier decades,” according to a New York Times report.

“We see two clusters when it comes to mass shooters, people in their 40s who commit workplace type shootings, and a very big cluster of young people — 18, 19, 20, 21 — who seem to get caught up in the social contagion of killing,” said Jillian Peterson, a criminal justice professor who helped found the Violence Project, which maintains a comprehensive national database of mass shootings.” (Citing New York Times report.)