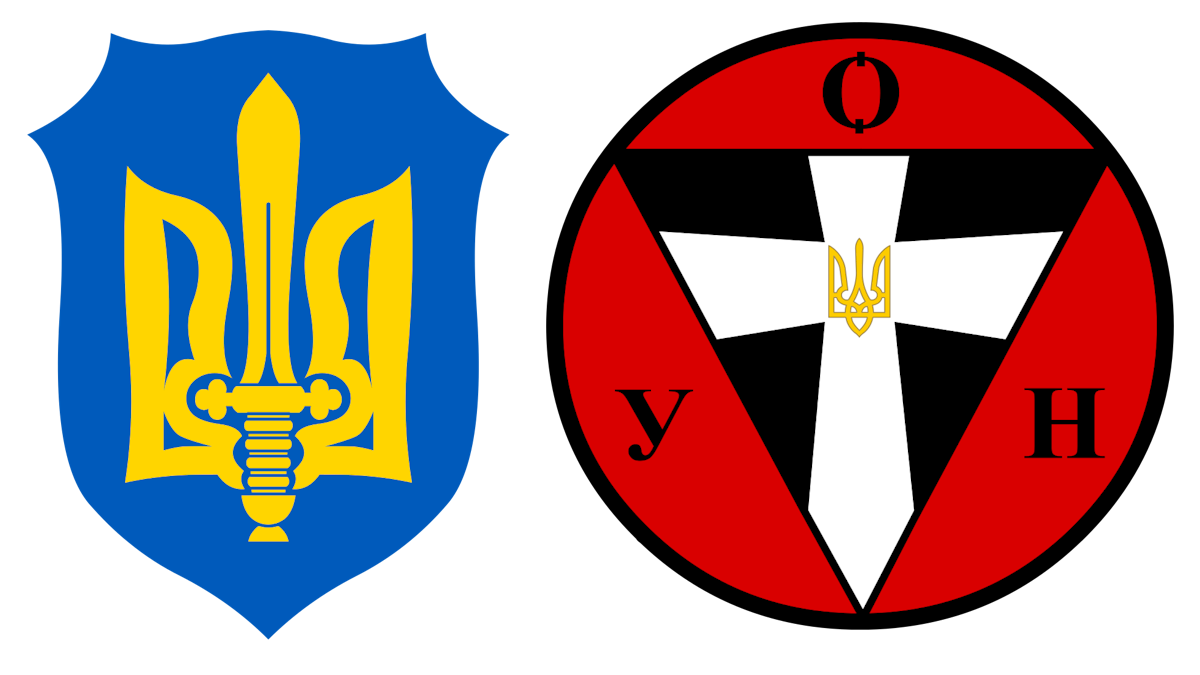 Ukrainian neo-Nazi nationalists fought side by side with Hitler’s Nazis in WWII, killing 25 million Russians. Russians now believe that their soldiers are fighting against most things that violate their principals and their cultural heritage and against the West’s absurd narrative that there are no Nazis in Ukraine.

Above image: Insignia of Ukraine Nationalist neo-Nazi organizations since 1929.

Biden’s America and Europe under American influence, by agreement, have worked hard in 2022 to obfuscate and even eliminate the history of the Ukrainian neo-nazi sector, once operating under Adolf Hitler, now perhaps operating in his memory—their many shrines to Hitler, according to insider accounts, video and photographs, make that sound correct.

Following the 2014 revolution in Ukraine the veneration of Nazi collaborators, including the murderers of Jews and Polish people, is a growing phenomenon in Ukraine and in Europe, where many consider such individuals as heroes because they also resisted the Soviet Union and massacred millions of Russians.

That explains why in January of this year the streets of Kiev were filled with people carrying torches and portraits of Stepan Bandera, who led the Ukrainian ultra-fascist army, whose members killed thousands of Jews and Polish persons, including non-combatant women and children. Stepan Bandera fought side-by-side with Hitler’s Nazis of Germany against the Russians of whom with the Nazi Third Reich, killed 25 million or more.

Nazi War Criminals including Bandera, responsible for ethnic cleansings and also implicated in collaboration with Nazi Germany as leader of the Organization of Ukrainian Nationalists within which was a Bandera-led battalion created by the German Nazis around 1940. 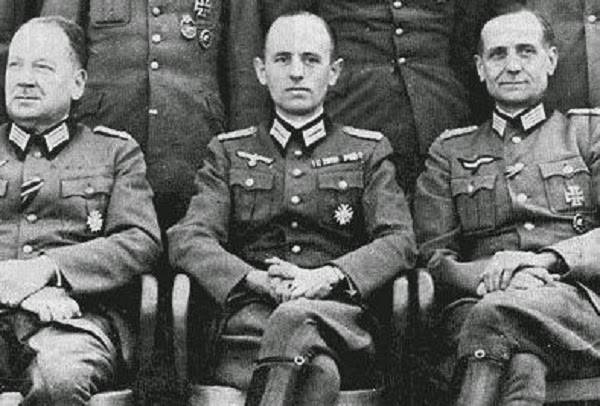 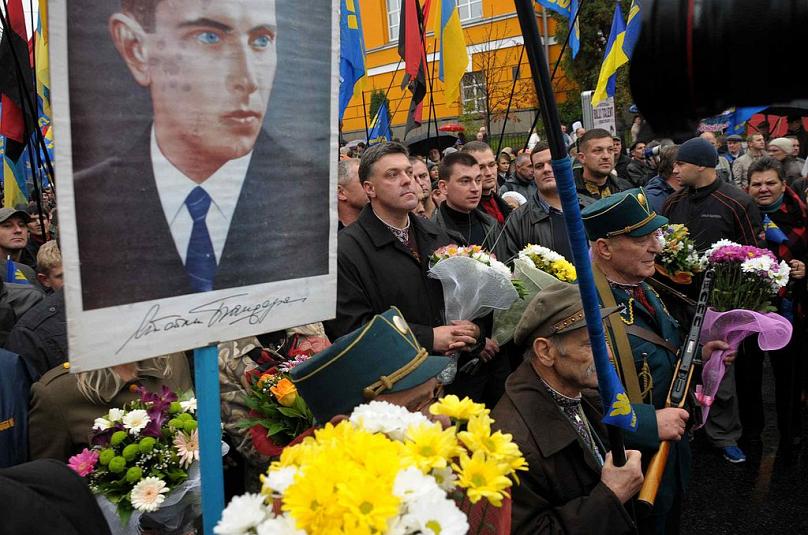 Ukraine hero, Stepan Bandera is a Nazi war Criminal (but a Hero in Ukraine). Archived photographs in the public domain. Bandera led a battalion created by the German Nazis.

By Melissa Hemingway in Ukraine and Micheal John in Toronto

Forward by Melissa from Ukraine:
Following FPMag interviews last week with private armed-guards and republic military officials in Donbass, law-enforcement people who cooperated on the arrest of a group of criminals FPMag can share context but not the Court’s evidence. These male criminals were raping orphan girls and other children and young women, putting girls up for sale on the Ukraine black market as part of a structured human slavery ring.

There is not likely one single Russian person who would condone the sale for sex of children these neo-Nazi mercenaries with the help of America, Canada, Britain and Europe have orphaned by shelling and killing their parents in Luhansk and Donetsk Oblasts, now Luhansk and Donetsk Republics following nearing a decade of separation from Ukraine.

Human trafficking is defined by The RINJ Foundation as “the illegal trade in human beings for the purposes of commercial sexual exploitation or forced labour (coercion): a modern-day form of slavery and the fastest growing criminal industry in the world.”

“These clean-sounding conventional terms set the standard and the framework for what qualifies as human trafficking on a societal and legal level. Add the word “rape” because sexing any child below the age of consent is rape. Add the word “rape” because sex with any person coerced into the act is rape. And rape as a weapon of war is a violation of UN Security Council Resolution 1820,” said RINJ Executive Director, Katie Alsop when asked.

FPMag was given access but not possession to huge amounts of evidence but banned from publishing specifics of the material by agreement not to risk corrupting the evidence of the case.

At this point the FPMag editorial board decided to present readers with a background context on the culture that to some extent, while confirmed elsewhere, is evident in the material captured from neo-Nazis and their money-making sex-slave trade organization which also involves Ukrainian municipal and state officials under investigation or already deceased or jailed.

This culture is why criminal groups claim to be and are therefore alleged to be operating with the full knowledge and approval of the government of Ukraine to rape, capture, sell or kill the children of the ethnic-Russians in Donbass. The Russian population is likely to passively overlook many atrocities done as revenge, somewhere around 95% of the Russian population approving.

This article will explain how the Biden Administration has made it impossible to stop Vladimir Putin’s drive across Eastern Europe. 14 October 2017. The streets of Kiev were filled with neo Nazi supporters  carrying torches and portraits of Stepan Bandera, the man who led the Ukrainian ultra-fascist army, whose members killed thousands of Jews and Polish persons, including non-combatant women and children, alongside Hitler’s Nazis in the war against Russia killing 25 million. Photo Credit: Gleb Garanich/Reuters

Historians explain that the Organization of Ukrainian Nationalists (OUN) and its many subsidiaries had an explicit role in the Holocaust and their mass ethnic cleansing of the Polish peoples during WWII, all on their own initiatives. OUN members were deeply devoted to the ideology of Adolf Hitler and devoted to the man himself, as they are today.

“Today, when there is a war with the occupier at the front, and the struggle against the ‘fifth column’ continues in the rear, we remember and honor the memory of Stepan Bandera,” said Andriy Tarasenko, leader of the nationalist party Right Sector.

Historical accounts indicate that during World War II, Bandera led the Ukrainian neo-Nazi nationalists, whose men killed tens of thousands of Jews and Poles. The Holocaust in Ukraine represents the beginning of the overall 6-million-Holocaust in which an estimated “1.5 million Jews in Ukraine were shot to death at close range in ravines, open fields, and forests including women and children”. Stepan Bandera led the Ukraine nationalists while fighting alongside Nazi Germany against the Russians all the way to Moscow.

This historical context makes it easier to understand why some 90% of Russians support the Kremlin’s military operation in Ukraine.


Similar music video is a tribute to the overthrow of the Third Reich by Russia and can be found here.

Why is this article in the category of “News”?
Because it is context otherwise stifled.

“Demonizing not just Vladimir Putin, but Russians in general, is ridding media in the United States of context that is pertinent to the coverage of Ukraine. Not only is the context missing, but it is being stifled in some cases of American coverage.” Citing —The war in Ukraine, according to the US media | Russia-Ukraine war | Al Jazeera

The government of Joe Biden spends many millions of dollars on the mainstream American media pushing for content that follows its narratives. Control the money to control their content is the mantra. CNN is a key target, sliding backwards on its own revenues, jam packed with commercial content others refuse to air,  propped up by the American taxpayer via Joe Biden’s administration, by obscure arrangements say media watchers like Jeff Jarvis of The City University of New York.

For example, according to a US Federal Report, the government “paid $1 billion to American media including CNN to promote COVID-19 vaccines“.

“Government funded journalism? How government uses funding, directly and indirectly, to capture the media. This research describes trends in how governments use funding to control media by not financing independent journalism, but choosing to fund instead media outlets that advance the government agenda and the interests of its allies and supporters, either political groups or businesses. Read: Control-The-Funding

“I see danger everywhere if government funds in any way approves or interferes with journalism and speech,” Jeff Jarvis of The City University of New York  said in 2020.

“To accept funding from government, no matter the alleged safeguards, puts us at risk of mortal conflict of interest. Whom do we serve then? Need I say it? Follow the money,” said Mr. Jarvis.

Biden narrative is propaganda about Ukraine ranging from him not being part of the Hunter Biden dealings with corrupted Ukraine fossil fuel companies to there being no Nazis in Ukraine.

Neo-Nazi nationalist groups of white supremacists in Ukraine, part of what was the Organization of Ukrainian Nationalists  (OUN) formed around 1929, killed tens of thousands of Jews during WWII and carried out a brutal campaign of ethnic cleansing that killed as many as 100,000 Polish persons in the west of Ukraine. Created as a fascist militia force and ideology cult (similar to Italian fascism) to free Ukraine from Soviet control, the OUN embraced the notion of an ethnically pure Ukrainian nation and continues that ideology, today. Neo-Nazis are today exploiting Russia’s war in Ukraine for their own purposes.

“There are very many other smaller local neo-Nazi detachments on their own, claiming various affiliations, but not publicly supported by any group,” explains Lana, a humanitarian worker with The RINJ Foundation‘s women’s shelters in the Donbass.  When it is time to canvass for fighters to go to other wars like the First Nagorno-Karabakh War, the Transnistria War, the War in Abkhazia, the First Chechen War, and the Yugoslav Wars the contribution of fighters from 100s of regional local neo-nazi groups are welcomed, as are the insignias, fighting skills and support of those local nationalists,” explains Ukrainian nurse Lana who following her 2012 graduation and her internship joined the RINJ Foundation setting up a chapter of RINJ Women in the Donbass. Lana had played a large role in protesting the rape and burning of Oksana Makar.

“Over the years I have been in the Nazi homes with police to identify rape suspects and have seen the evidence of their Nazi ideology, their shrines to Hitler, and their frantic search and acquisition of their Nazism to support their misconduct,” says Lana. “Even before the Maidan revolution the Nazis were raping ethnic Russian, Filipino, African, and Japanese students. They are rapists and murderers. They use ideology to support their crimes. They screamed that logic in horrid terms describing the women and girls they kidnapped, raped and sold as non-human, at local police terrifying officers when it was a time for an arrest for the rape of students and other women and girls. Photo credit: source supplied derived from a phone belonging to a neo-Nazi brigade member.

“Neo-Nazis Criminals and other Criminals want children for:

“Only the ethnic Russian police officers ever helped us get these rapists and murderers arrested,” explained Lana.

“The world ignored the terrible time we had getting Black African students out of Ukraine in February because they were not White. This white supremacy fits the American ideology perfectly. Do you want to know how we got so many non-whites out? Through Russia, not Ukraine or Poland. In Ukraine they were arrested. In Poland non-whites were blocked from coming in to Poland,” said Lana with a shrug. “As a Jew I am not happy with the vast number of Holocaust deniers and horrible racist Nazis in Ukraine, but other than that I have no sides, just the side of my women and girl patients and charges.” 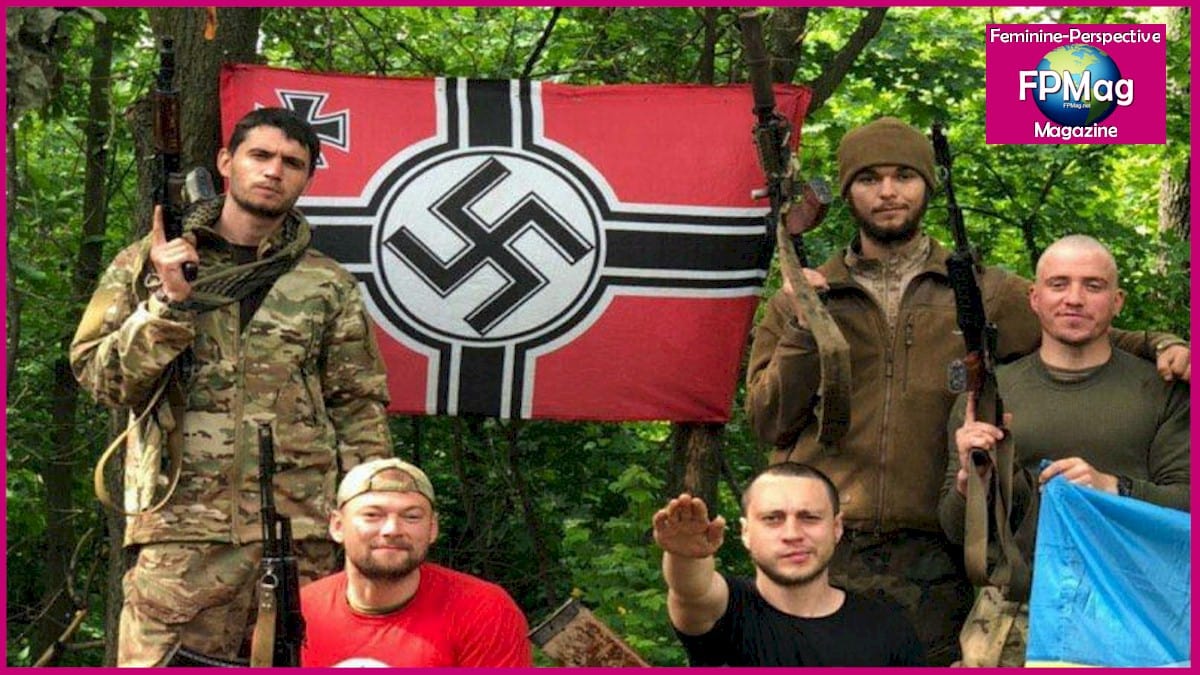