Can China prevent the USA from creating another lasting human catastrophe as it has created elsewhere on Earth, like Ukraine, North Korea, Libya, Afghanistan, Iraq, Syria, Yemen and more.

The ten nations of ASEAN agree to much of this goal.

That would mean that America and its NATO FVEY Anglosphere allies must remove their warfare trappings from South Asia and the Asia Seas. America is 10,000 kilometers away and has no rights to militarizing the Asia Seas.

This is no longer a contest between Asia and the Five Eyes (FVEY) racist patriarchal Anglosphere, it’s a battle between warring patriarchs and global peace-minded feminists.

Is Chinese foreign policy in South Asia in the best interest of its neighbours?

Pushing America’s warships, warplanes, missiles and troops out of the Asia Seas regions may prevent the USA from creating another lasting human catastrophe as it has created elsewhere on Earth, like Ukraine, North Korea, Libya, Afghanistan, Iran, Iraq, Syria, Yemen and more.

Listening to Joseph Biden swearing he will bring the USA to war against China over Taiwan reminds of the American slaughter of 3 millions of Koreans in the early 1950s without any good outcome whatsoever, only 7 decades of strife, sanctions, blockades and mass deaths due to hunger and disease. Another 3,500,000 North Koreans died in the aftermath from starvation or hunger-related illnesses due to America’s hybrid warfare following the 1952 slaughter of roughly 3 million. North Korea was utterly ruined. “Everything is destroyed,” said US bomber commander General Emmett O’Donnell. “There is nothing standing worthy of the name.” Then there was the Vietnam war through the 50s, 60s and 70s. American involvement in that war brought another 3 million deaths. That is nearly the sum of everything America has brought to Asia except repeatedly colonizing the Philippines and leaving Filipino 12-year-olds pregnant, inspiring sex tourism in the Philippines and mainland ASEAN, then there’s Hiroshima and Nagasaki. Killing Asians.

The US President firmly says America will defend Taiwan militarily or in other words go to war with China if Beijing attacks Taiwan in order to end Taiwan’s attempts at alleged secession.

Most experts do not believe America would succeed in saving Taiwan from a Chinese takeover and in fact that it would be very costly.

Because of Taiwan, America is loading weapons into the region and increasing its flotilla patrols.

America offers an opposing fanatical view to that of Xi Jinping, which boils down to: “We can go and do whatever we want wherever we want because we have more conventional and nuclear weapons.”

That also may not be true. Asia includes Russia. Russia and China are tight.

“American tactical nuclear missiles are all over Asia in mobile and stationary settings according to the former US Secretary of Defence. US nuclear weapons are constantly sailed through ASEAN waters despite being totally unwanted, in fact in the Southeast Asian nations a declared nuclear weapons free zone exists which America violates continually if the truth be known,” says a US State Department official who does not wish to be identified. Mr. Baldock and one other source confirm the likely truth of this statement.

America surrounds China with up to 800 military bases and continues to intimidate China with massive warship fleets sailing through the congested waters of the Asia Seas. At times the US fleet has mishaps like dropping its F-35C warplane deep into  the sea and its nuke submarines smashing into underwater masses scaring millions of Asian families who wonder ‘what else is in that water we work in, now’?

The ‘nearly fatal grounding of USS Connecticut’  was no small matter and could have been catastrophic.

The question that women in Asia have, is will Beijing be equally fanatical about the American hegemony in Asia as it has been with other significant threats to its peoples.

Fanaticism in Beijing is a new norm, but as crazy as that sounds, it seems to be a worthy policy in some of five examples. 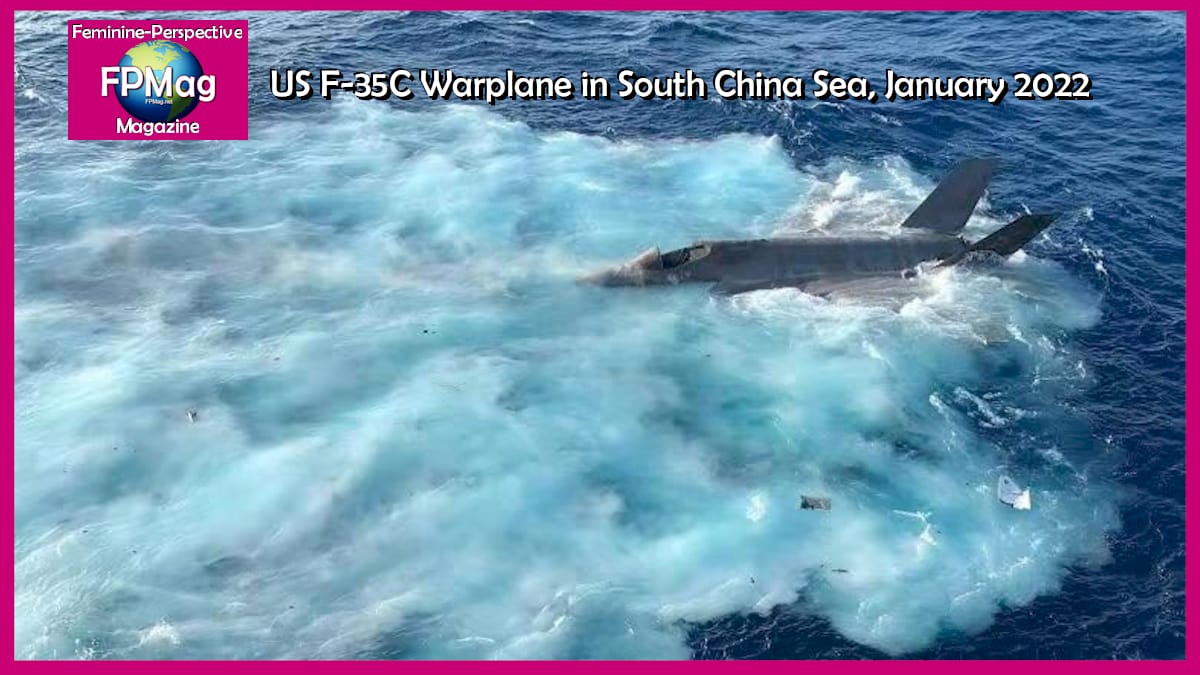 In heavily researched reports from all over Asia, FPMag authors have been unable to find legitimacy for China’s historical claims to Taiwan and its claim to owning 90% of the South China Sea including those parts inside other nation’s territorial waters.

Everything points to Beijing’s fanatical approach to problem solving. Probably the same is exactly true about most other claimants to various contested islands or small outcrops of tidal rocks, with the exception of the Philippines.

Manila at this moment suffers the presence of hundreds of Chinese fishing and military vessels stealing fish and violating Philippines Sovereignty inside its Extended Economic Zone (EEZ). A certain fanaticism of China?

China’s claim to Taiwan is explicit and unequivocal. Reuters Video/YouTube

1) Islam is assumed to be only Radical Islam in Beijing

China saw the world go to war against bloodthirsty Daesh Salafist Jihadists who brutally murdered and looted wherever they went. That caused Beijing to look worriedly at its Muslim population of Uyghurs, native to the Xinjiang Uyghur Autonomous Region of China. That group now legitimately claims to be under a valid threat of cultural erasure. China is forcing a re-education program for many of the 12 million population of the Xinjiang Uyghur region; banning religious practices in the region; as well as destroying mosques and tombs. Every act against China’s Islamics points to fanaticism.

“It worked for China. There is strong biostatistical evidence to suggest Beijing likely saved millions of its people’s lives with a zero-tolerance policy for the SARS-CoV-2. Most experts I speak with agree that no other country in the world could have done what China did, but it worked very well, and lives were saved on a massive scale,” says Dr. Fred Harris, team lead for the Civil Society Partners against COVID-19 tracking team in Singapore.

“China’s approach to this issue flies off the fanaticism graph and trashes the Law of the Sea conventions. Worse than that, the South China Sea claims of Beijing seem completely absurd according to a dozen nations in the region,” suggests Mr. Baldock.

Read: China Nine-Dash-Line is not malice but likely is hysterical fanaticism

4) The Taiwan claim would not be so absurd if this was 1950. But China is far too late to lay total claim to Taiwan.

If Beijing had a significant objection to Taiwan going its own way, it should have brought that up with Chiang Kai-Shek’s  Nationalist Kuomintang Party in or around1949-1950.

In the case of Taiwan, Mao Zedong seemingly did not care about Taiwan according to many historians. He wanted to rule mainland China from Beijing and while he apparently hated Chiang Kai-shek.

By 1949 Taiwan President Chiang completely took over the little island after his years of fighting with Mao in mainland China.

“Chiang Kai-shek took Taiwan on a completely independent path toward full democracy, strongly allied with the United States and even on the other side of the Korean war from China,” suggests Sara Qin, a nurse practitioner currently studying in Taipei doing post graduate work. “Mr. Chiang’s rational thinking is more pronounced and evident today than are his occasional bouts of fanaticism,” she added.

Robert Kaplan wrote, “Asia’s Cauldron: The South China Sea and the End of a Stable Pacific”. Kaplan is on Foreign Policy Magazine’s list of the Top 100 Global Thinkers

“But in all of China’s history, Chairman XI appears to be one of the best leaders the country has ever had. That’s not saying too much, but in all honesty, Chairman Xi is doing a good job for his country with some exceptions. China has a long history of crackpots,” notes Simon Baldock, an Israeli security analyst based in Tel Aviv.

Item 5 of Beijing’s Persisting Fanaticisms is about a country that cannot exactly feed itself.

“While not just ASEAN members clamour about China’s overfishing and a string of convoluted Chinese edicts about conservation in the South China Sea 1.4 billion mouths to feed is no small matter and everyone’s responsibility according to ideal global values once held dear by the United Nations’ members. China has a need for wheat, soybeans, corn, and pork and both Europe and the Americas have the ability to meet all of the demand under peaceful circumstances with a reliable supply chain,” notes PhD Candidate Sara Qin.

“Until the 1.4 billion people of China are confident that their food security is assured, and the supply chain is healthy and enduring, the people will forgive their government in Beijing, anything that achieves these ends or interim solutions until the goals are achieved, so [the] world needs to watch out for that and stop being a bully on China,” she added.

Remember Mao Zedong. Just the thought of Mao helps one appreciate the stability of Xi Jinping.

Chairman Mao Zedong has been accused of being the most murderous scoundrel of the 20th century who killed well over 80 million Chinese in a bid to ‘rescue’ China’s peasantry from the warlord fiefdoms of the past and from alleged-dictator Chiang Kai-shek’s so-called “brutality and corruption”.

Chairman Mao, according to research by Valerie Strauss and Daniel Southerl for a Washington Post article published on July 17, 1994, the data obtained from archives indicates that, “the two people most associated with mass deaths in this bloodiest of human centuries—Adolf Hitler and Joseph Stalin—were likely surpassed by a third, China’s Mao Zedong”. 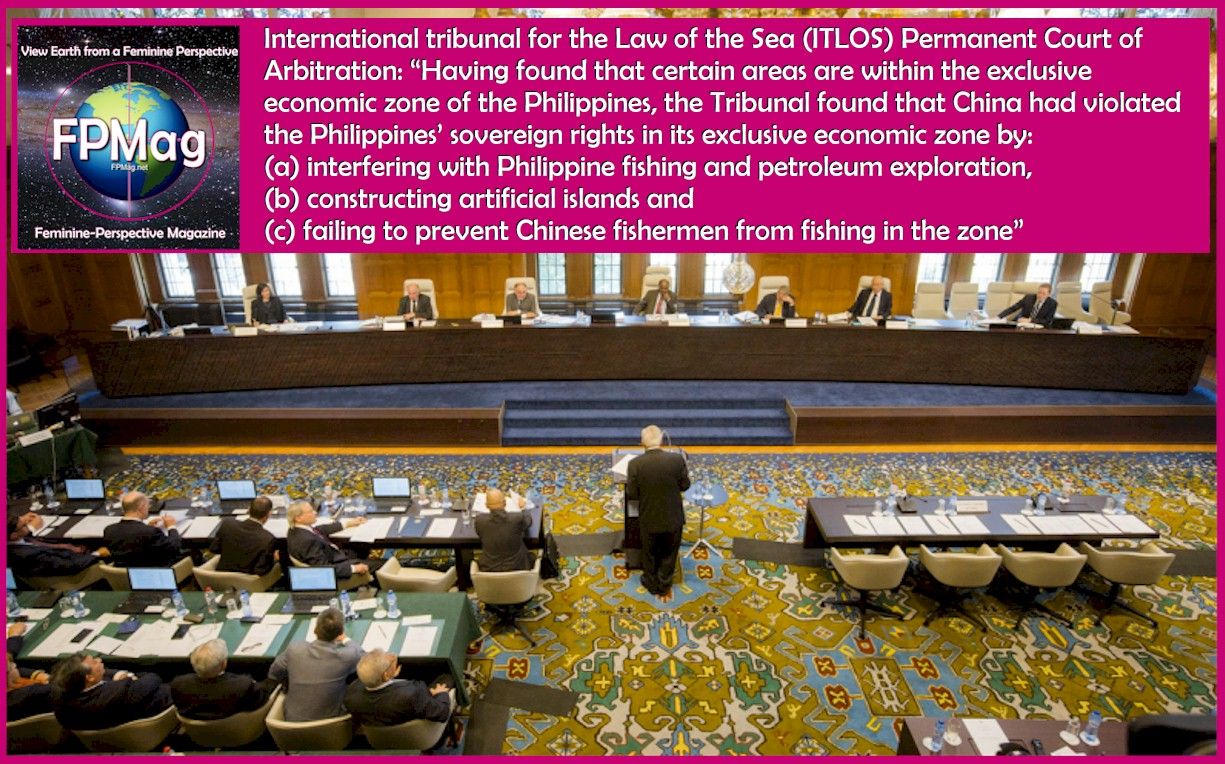 The photo and its story: International tribunal for the Law of the Sea (ITLOS) Permanent Court of Arbitration announced in 2016 that, “having found that certain areas are within the exclusive economic zone of the Philippines, the Tribunal found that China had violated the Philippines’ sovereign rights in its exclusive economic zone by:
(a) “interfering with Philippine fishing and petroleum exploration”,
(b) “constructing artificial islands” and
(c) “failing to prevent Chinese fishermen from fishing in the zone””

“I totally agree with the response of our (Beijing) government,” (which was to deny the authority of any and all courts in the matter of the South China Sea) said Wang Ying, a Chinese marine geographer and member of the prestigious Chinese Academy of Sciences. She is a devoted intellectual understudy of Yang Huairen.

Then she said that, “the matter is one of pure science”. 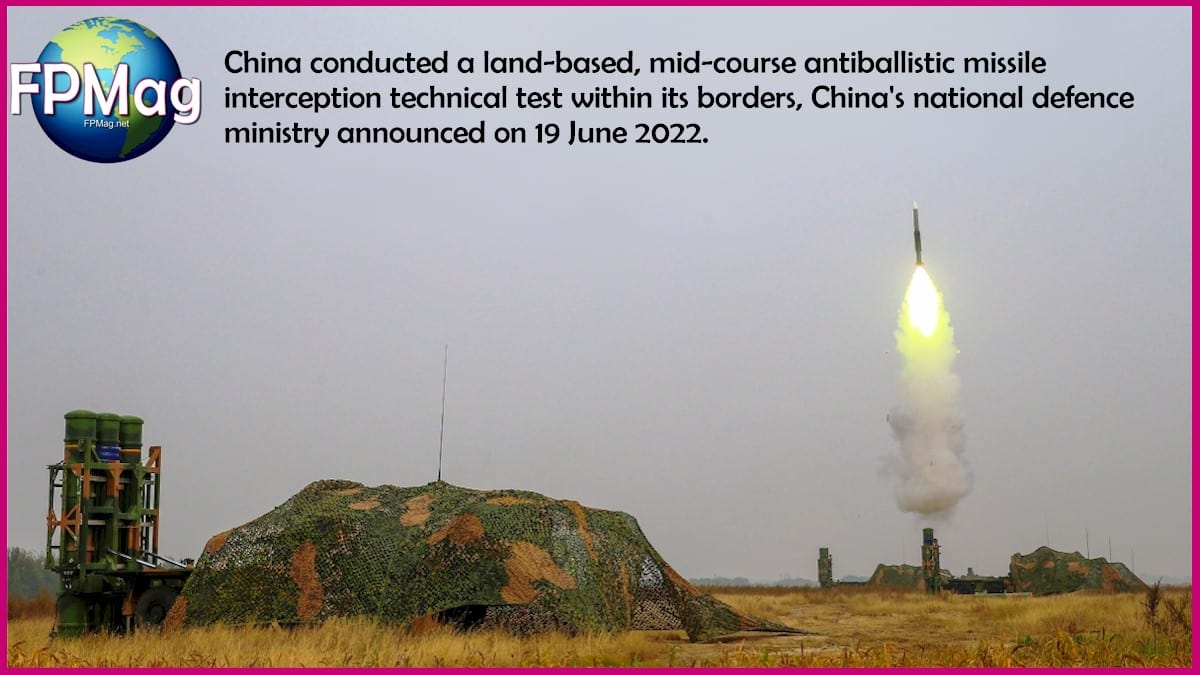 Taiwan will need to decide that its best interest is served by becoming an autonomous province of China in a peaceful coexistence that continues to exploit the positive things the two have in common.

To this day, Robert Kaplan‘s predictions of 12 years ago seem to be correct. ‘China will not militarily attack Taiwan.’ (Watch the video above.)

Both China and Taiwan have too much of a dependency to destroy relations with war. Such a war would be devastating for Taiwan. It would end Taiwan. Mr. Kaplan believes what makes sense, China is not a warring nation. Eventually China and Taiwan will agree to the Taiwanese autonomous region or province of China with many special status agreements for the island. Both will benefit enormously, especially if Taiwan no longer needs to waste chunks of its domestic product on American weapons and if China no longer needs to aim a couple thousand missiles and whatever else at the island.

“The South China Sea and the End of a Stable Pacific“ Robert Kaplan’s book, offered sage advice. It is worth the time to read from cover to cover.