Sending billions upon billions of dollars worth of weapons to Ukraine to kill the ethnic-Russians in the breakaway Donbass republics of Donetsk PR and Luhansk PR ‘until every last Ukrainian is no longer standing’, while impoverished American children live hungry in tents on inner city sidewalks and under highway bridges across the USA is a crime against humanity that defies everything Biden ever stood for.

America needs better Executive Branch leadership and cabinet officials with the guts to tell the solely political White House, “This is wrong”.

Among the catastrophically incompetent cabinet secretaries appointed by those who tell forlorn babble-mouth USA President Joe Biden what to say, the appointment of Lloyd Austin and Antony Blinken have ruined the USA global image and wrecked the Biden presidency.

Antony Blinken will go down in history’s annals as the most dangerous, arrogant flake of a foreign secretary in all of America’s history.

This supercilious personality-runt Antony Blinken has brought the entire world to the brink of Armageddon with his prick-ish misogynistic approach to diplomacy with everyone he meets, backed by thousands of missiles and some 850 military bases in over 90 countries around the world.

In a back-handed comment a senior diplomat we recently dined with, a very smart woman said, “you smile, bright-faced and nod politely at even the court jester’s idiot nephew when you have that many missiles and guns pointed at your head,” answering ‘why officials around the world tolerate Blinken’.

Blinken’s outright lies about the murder of Shireen Abu Akleh

FPMag and its publisher have extensive close and trusted sources in Israel regarding this and other matters and while currently guarding source identifications for reasons of their safety, have no equivocation from any source: “this was a targeted killing of Shireen Abu Akleh” say at least three sources plus a number of ‘dark’ residents of the global intelligence and diplomatic communities with their own sources.

Furthermore, witnesses at the scene and the forensic data indicate a targeted killing of a person who identifies herself unequivocally as a “Press” person. Shireen Abu Akleh was murdered with a single sniper shot aimed through an advanced scope capable of displaying the identification features of Shireen as if the shooter was centimeters away from their assigned target, to her head near the point of the word “Press” on her protective helmet.

In the course of a story’s follow up there is almost always a naysayer emerging against the original data, witness statements and interpretation. Today the witnesses to the 11 May 2022 murder of Shireen have this firm steadfast look in the eyes as they not only remember the event more but feel it more. In the matter of Shireen Abu Akleh the data moves toward confirmation of a targeted murder without a doubt. Anyone who has ever looked down the scope of a sniper gun knows this feeling. This could be tried in any real court.

“Since the US has promised that it has no intention of conflict with China, it should respect China’s sovereignty and territorial integrity—stop interfering in China’s internal affairs,” said Chinese Foreign Minister Wang Yi who met briefly with US Secretary of State Antony Blinken on Saturday. 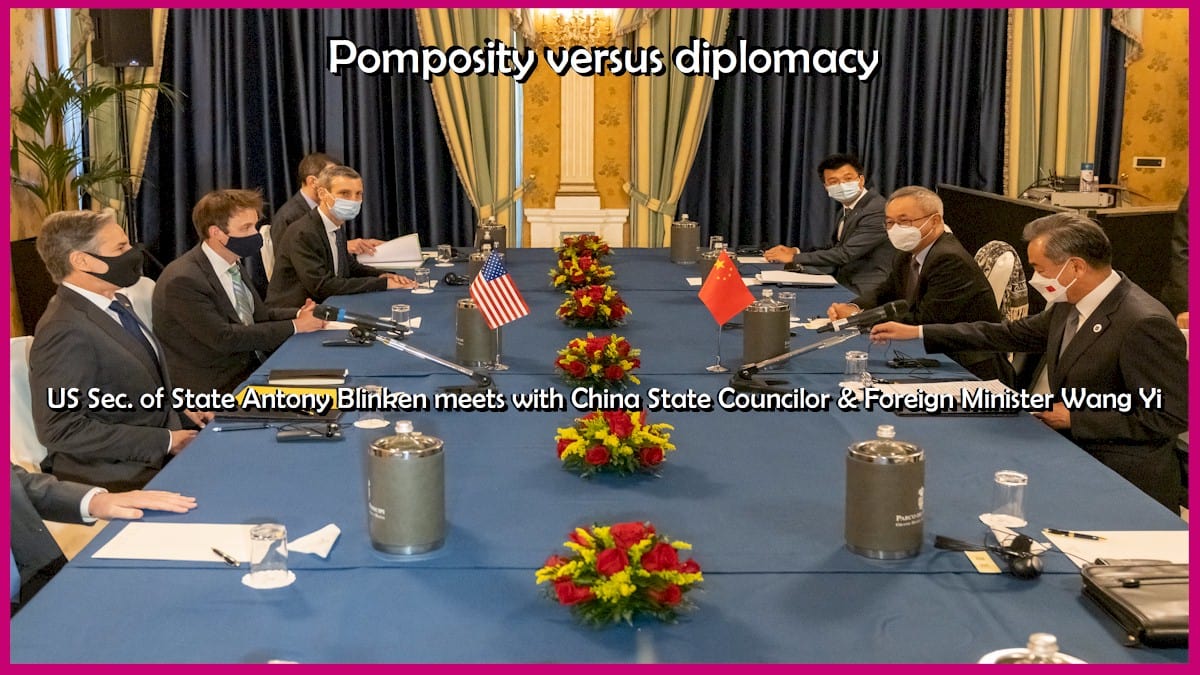 On the evidence, China’s leadership is a stable, amicable, intelligent, peace-loving structure, committed to an extreme extent to public policy that ensures safety and well being of its constituency, the Chinese people. Blinken attacked those virtues from the first day of the Biden administration as if he were the idiot nephew of the court jester.

In a published statement by the Ambassador of the People’s Republic of China to the United States of America, China set out a definitive position summary that is worth reading in its entirety.

“US Secretary of State Antony Blinken has recently delivered a speech at Asia Society outlining the US administration’s approach to China. With carefully calibrated language, he sought to promote the “China threat” narrative, interfere in China’s internal affairs, and smear China’s domestic and foreign policy, all in an attempt at full-blown containment and suppression of China,” opens the extensive policy paper.

China is responding to Blinken’s persistent belligerence and dishonesty saying the two sides “must respect each other, coexist peacefully and avoid confrontation.”