Sum of complexities of the unvaccinated is danger to society

Emmanuel Macron and Justin Trudeau are both under fire for slamming down on AntiVaxxers.

Following numerous critiques of Emmanuel Macron’s jab at antivaxxers, somebody had to resurrect  Justin Trudeau’s 2021 election campaign speech slamming the same conspirators against doctors and scientists.

Rex Murphy wrote on 5 January, in an over-the-top opinion piece in the National Post (Canada), effectively rabble rousing the antivaxxer community, “It is never right for the leader of a country to launch a furious invective against an entire subset of citizens [antivaxxers]. It is certainly never right to do so with the full force and blatant contempt that Prime Minister Justin Trudeau put on display during last fall’s election.”

About antivaxxers, Emmanuel Macron had said, “I really want to piss them off, and we’ll carry on doing this, to the end,”  to Le Parisien newspaper.

All patients are equal but doctors are wary of sociopathic antivaxxers, not to be confused with patients with a legitimate anxiety disorder: fear of needles.

“All patients are equal in the eyes of medical practitioners,” says beloved doc.

FPMag asked an elderly physician and surgeon with many decades of public health care experience, for his thoughts. Dr. Anderson of The RINJ Foundation suggested that all patients are equal in the eyes of medical practitioners, even suicide or other mental health cases, and “their care must be commensurate with their indications,” he said.

“The unvaccinated have become the primary owners of this pandemic,” Dr. Anderson said.

“Sadly, millions of people wish to be vaccinated but do not have access to vaccines. Regardless of the fact that vaccine nationalism and vaccine hording has inflicted unfairness, these people who seek vaccines which are unavailable to them are still a threat to the human race. That’s because they will get sick and perpetuate the spread of disease,” said the doctor.

“On the other hand, people who have access to vaccines but encourage communities with plentiful vaccine access, to refuse vaccination for bizarre reasons explained with conspiracy theories, have malice and forethought driving a worse threat to the human race,” the doctor added. “Because there will be worse pandemics.”

“But politicians have a different job. Politicians who really care about their constituents, I can imagine becoming passionate against anyone, any phenomena, that threatens the lives of their people. Actually I am very glad to hear this news. Mr. Macron and Mr. Trudeau are obviously very passionate about their constituents’ safety and antivaxxers are a dreaded danger to those communities,” he said. 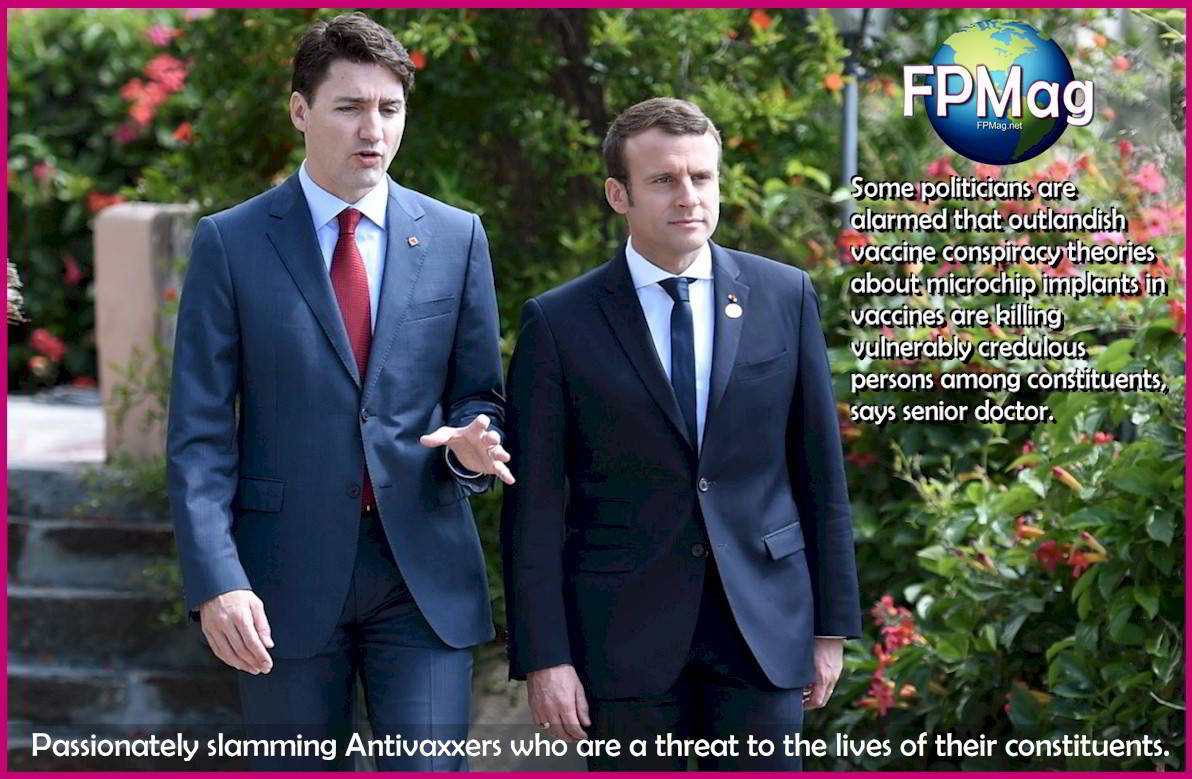 “Some politicians are alarmed that outlandish vaccine conspiracy theories about microchip implants in vaccines are killing vulnerably credulous persons among constituents,” says senior doctor.
Canadian Prime Minister, Justin Trudeau, and France President Emmanuel Macron passionately slamming Antivaxxers who are a threat to the lives of their constituents.
File Media Pool Photo: Canadian Prime Minister Justin Trudeau (L) and French President Emmanuel Macron talk as they attend the Summit of the Heads of State and of Government of the G7, the group of most industrialized economies, plus the European Union, on May 26, 2017 in Taormina, Sicily. Photo Credit: Media Pool/AFP/Stephane de Sakutin. This photo is cropped. Art/Cropping/Enhancement: Rosa Yamamoto / FPMag

“People who fear needles (trypanophobia),” continued Dr. Anderson, “need our compassion and our help. People who spread lies about microchip implants and vaccine conspiracies are psychopaths and we in the medical profession have been unable to cure those personality disorders. We must keep them in therapy to prevent lawlessness, or keep them in prison if they offend, for their own safety, and for public safety, respectively,” he said.

“People with trypanophobia must not be mistreated. But both these politicians have referred to ‘antivaxxers‘ which is a term that refers to individuals who deliberately sew misinformation as a mischief to harm members of their communities,” he said.

“Maybe, Melissa, you should tell people with trypanophobia,” said the kindly doctor, “that these politicians are not talking about them, and that we in the medical profession have solutions for their problems, and in severe cases, it is called a ‘pill’,” he said with a smile.

“Trypanophobia (fear of needles) is no joke,” say doctors. Medical professionals say they can treat or accommodate this anxiety disorder and mitigate bad health outcomes.

According to Harvard University’s Dr. Shmerling, “People with trypanophobia who are contemplating a jab may experience the following:”

Study under way to determine who is at greatest risk from Omicron in developing nations, points to unvaccinated groups with chronic vulnerabilities, children and elderly, especially.

Over Christmas and New Years, in one family, in the Philippines, where a whopping (for ASEAN) 46.6% of the population is vaccinated, a four-year-old unvaccinated child suffered 6 days with Omicron; his 11-year-old sister suffered 9 days with Omicron; the mother, who is vaccinated with two doses of the Sinovac vaccine, and who  had brought the virus home from a shopping trip, likely in a hand or grocery contact because she was wearing a full-face medical shield over a high-quality certified N95. She experienced ultra-mild symptoms for two days while wearing a procedure mask at all times, even during sleep. The husband, who has two well-managed comorbid chronic diseases, was vaccinated with AstraZeneca, second dose in July 2021, and a 50 microgram booster of Moderna on 22 December, and was not infected.

“Conclude that Vaccination for the woman prevented serious illness (“It was less than a cold,” she said.) And her husband, with a recent booster, was not infected at all, despite being the caregiver for the infected small children,” said Dr. Nassima al Amouri, one of the doctors overseeing the study.

“This family experienced what we are seeing as typical with the Omicron,” say the medical experts overseeing the study. “Despite vaccine breakthroughs, we are becoming increasingly more worried about unvaccinated children and their unvaccinated elderly family relatives.”

The RSAC Nurses Without Borders, had initiated the survey from 29 November 2021 until March 2022, which is still ongoing, and is discovering some interesting results to date in 109 specific families, as medical officials explain that “treatment protocols and directives are being evaluated to learn if modification is indicated by learning experiences dealing with new SARS-CoV-2 variant.”

“The first thing we do with adult patients with ‘stuffy’ breathing passages is isolate and then treat. We can test [Omicron] with a throat swab, but that comes later as a low priority. Following diagnostics, the first treatment is for their underlying chronic illnesses that they have let go because of lack of doctor visits and medication updates. Some of these issues diminish their immunity and cause an otherwise unlikely morbidity to Omicron,” explained Nurse Practitioner Grace Edwards in Afghanistan on 3 January.

“We had a family with a more difficult set of outcomes, matching the study criteria,” explains Michele Francis working at facilities managed by NWOB.org and a faith-based NGO in the Amazon Basin.

“About a six hour walk from our nearest clinic, an outpost of our hospital, is where this family lives. Their village is in an outbreak status so we are moving one staffer and two local volunteers into a quasi-community-sports-center to vaccinate more people. The anecdotal case we picked is typical of many, as you asked. This family was infected with COVID-19 although we had no genomic sequencing data on the variant but based on symptoms and test indicators, it was likely Omicron. None of the family was vaccinated because they had refused back in July when a vaccination team came to their village,” she said.

“An elderly family member was admitted to hospital on Christmas day and has been fighting for his life. He is on a high-flow oxygen canula and an IV which, now with oral medications, we use to manage his diabetes, hypertension, prevent cytokine storms, and fight pneumonia. His status is ‘improved’, but he is an urgent-care patient who occasionally scares us. He will soon be a centenarian. The rest of the family of nine is in the clear and nearly all recovered. The gentleman patient has been fighting for his life for 13 days and is coming out of the woods now, but it was a close one. We let the now-vaccinated adults in the family have designated volunteers rotating into his isolated room, where they pray and offer kindness-warmth and comfort, which has been helping the recovery. I know that is controversial allowing a home attendee but that is the spirit of our faith-based partners, and I agree under the isolation and PPE rules we employ,” she added.

“The consensus for a group of 109 families across seven countries is that the unvaccinated population with comorbid chronic disease, regardless of age, including children, are at risk of death from Omicron, much like, but much worse than influenza,” explains Dr. Nassima al Amouri who has been overseeing the internal study.

“A second conclusion is that a full vaccination in early 2022 comprises at least three doses of an approved vaccine, at the regulators’ prescribed intervals” said Dr. al Amouri.

“A third preliminary conclusion is that all chronic illness therapies must be maintained and that routine vaccinations of children and adults for as many as 20 life-threatening diseases, must be maintained,” she said.

Science in 5 Min. Video: Vaccinating for Influenza and COVID-19 by World Health Organization

The article " Sum of complexities of the unvaccinated is danger to society " was written by Author: Melissa Hemingway (Biography, Email) Senior Staff Writer and Associate Editor at Large
Contact Melissa Hemingway on Twitter ~ Facebook ~ Find on YouTube