SARS2 Vaccines prevent death but not infection. Can we do better? A universal COVID vaccine? Wear an N95?

“What we are doing is not working. But there are some promising developments,” say doctors.

“Until the human race gets its act together, the pandemic will rage and new viruses  will come along. And its not about antivaxxers. Antivaxxers are like the criminals among us. They are part of the two percent of the population who are criminals/sociopaths. They spread vaccination misinformation as a mischief targeting the ten to twenty-five per cent of the population suffering anxiety disorders related to needles, doctors and vaccines. Ironically, antivaxxers are themselves, vaccinated. They are not the ones dying in hospitals. Those unvaccinated COVID-19 patients are people who suffer anxiety neurosis so badly they make many life-endangering decisions using any crazy excuse to dodge their phobias,” said Dr. Nassima al Amouri on Saturday. She is a medical director in the Middle East for The RINJ Foundation‘s medical sub units.

Dr. al Amouri is one of many specialists urging for a new direction in vaccine technology.

A group of 50+ scientists recently proposed, “The recent success in the rapid development of safe and efficacious SARS-CoV-2 vaccines has been tempered by the emergence of virus variants to which vaccine-induced immunity has shown diminished potency or efficacy. Thus, there remains a need for next-generation vaccines that target the broadening antigenic diversity of SARS-CoV-2 and related coronaviruses.”

The World Health Organization (WHO) is looking for universal COVID vaccine and has appointed a team of boffins to get going and find some next generations solutions for today’s pandemic problems.

“This will not happen overnight, so with Omicron causing infection explosions because it is so very different to what the vaccines were designed to deal with, people need to start wearing N95 masks as quickly as they can learn how,” said the doctor. There are a number of quiet hopefuls in vaccine development.

Thus far it has been learned that a SARS-CoV-2 ferritin nanoparticle vaccine elicits protective immune responses in nonhuman primates. Phase two and phase three human testing are next at the Walter Reed Army Institute of Research (WRAIR) in Bethesda Maryland, USA.

The goal in this USA military research is to produce a forward looking vaccine against most viruses, but for now, an omnipotent vaccine that addresses all posible variants of the SARS-CoV-2 coronavirus.

Some 50 scientists are working on this project.

“These potent humoral and cell-mediated immune responses translated into rapid elimination of replicating virus in the upper and lower airways and lung parenchyma of nonhuman primates following high-dose SARS-CoV-2 respiratory challenge. The immune response elicited by SpFN vaccination and resulting efficacy in nonhuman primates supports the utility of SpFN as a vaccine candidate for SARS-causing betacoronaviruses.”

Results of SpFN testing are promising:

Histopathology and virus detection in the lungs of SpFN vaccinated and unvaccinated control rhesus macaques following SARS-CoV-2 respiratory challenge.
(A to D) Paraffin-embedded lung parenchymal tissue sections collected at 7 days post-challenge were stained with hematoxylin and eosin (H&E). (E to H) samples were also used for IHC to measure viral antigen (brown). Representative images at two different magnifications, one for H&E and the other for IHC, are presented. The symbols (A) show pulmonary macrophages infiltrate. Viral antigen is seen as brown aggregates with an inset at higher magnification (20μm) showing peribronchiolar virus identified with arrows and arrowheads (E). Source: Science.org

Once again, this approach looks at the the spike protein of the ncov-2019 virus as an identification feature. Their spike protein sequence was derived from the Wuhan-Hu-1 genome sequence (GenBank accession number: MN908947.3) with several significant modifications.

Some doctors have been suggesting that the next generation of vaccines not look at the spike protein for a messenger to the human body’s immune system but instead, pick something else, that is unchanging in the virus particles.

According to Gavi, the Vaccine Alliance, “On 4 November 2021, the US biotech company Novavax submitted an emergency use application for its NVX-CoV2373 vaccine candidate to WHO. If approved, this would be the first protein-based vaccine to be recommended, although others may not be far behind: China-based Clover Biopharmaceuticals and India-based Biological E expected to file emergency use applications for their own protein-based vaccines to various countries in early 2022.”

WHO is going to focus on vaccine development with its new Technical Advisory Group on COVID-19 Vaccine Composition.

WHO has tasked a special advisory team of medical professionals and scientists to advice the WHO on vaccines with a view to looking at options such as:

A repetitious series of boosters is not the way ahead when most of the human race has none.

Basic infectious disease measures must be used to prevent infection by the public.

Vaccines prevent death but not infection. “We must do better to end the pandemic,” think many doctors. The existing SARS-CoV-2 vaccines do not prevent COVID-19 infections by SARS2 mutations beyond the ancestral virus. These vaccines and their booster shots have saved lives by preventing severe illness in most patients. That seems to be a general consensus based on hard statistical data.

It is not true that humans should accept vaccines intended to only prevent serious infections and death or the world would still be facing widespread infections of smallpox, polio and the like.

Vaccines should help the body become immune to infection in order to prevent what is being faced today from the SARS-CoV-2.

Can mankind develop better vaccines apolitically and without hording and profiteering?

The World Health Organization’s Dr. Tedros seems to be trying to refocus the world’s attention on ending the pandemic with more sensible and ethical means.

That would mean a vaccine that is based not so much on the ever-changing spike protein of the virus but on the parts of the virus that remain constant through all its known mutations.

According to a recent statement of the World Health Organization” COVID-19 vaccines need to: 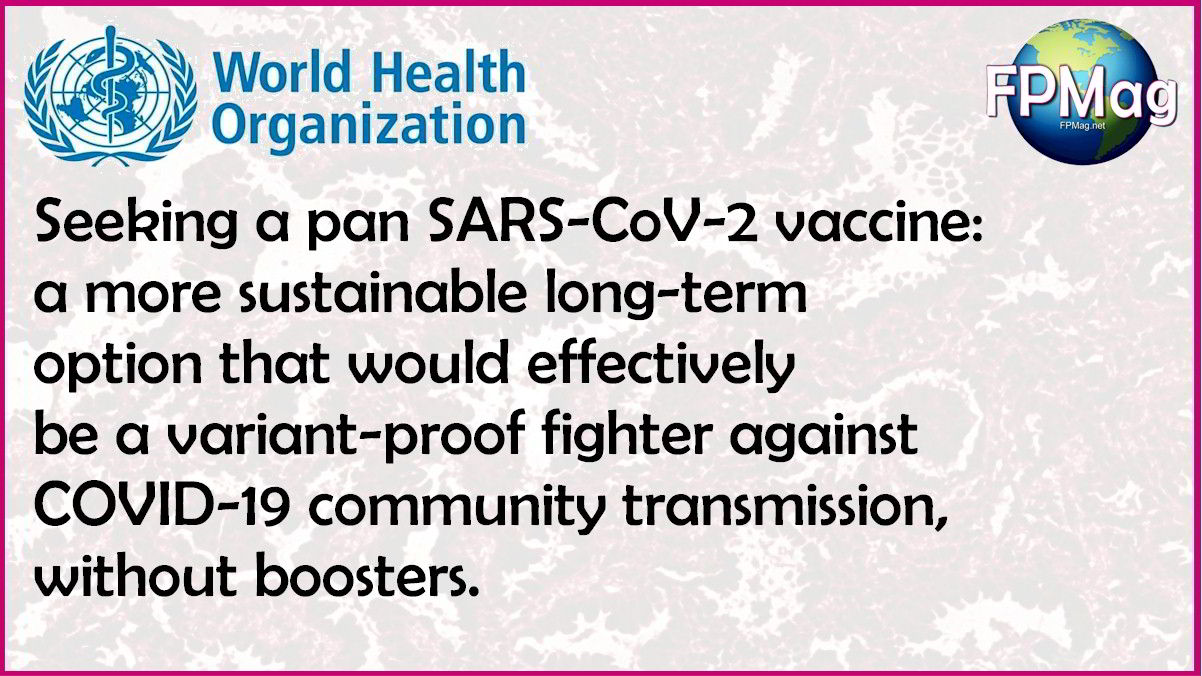 As one of its options, the World Health Organizations is Seeking a pan SARS-CoV-2 vaccine:
a more sustainable long-term
option that would effectively
be a variant-proof fighter against
COVID-19 community transmission,
without boosters.

What happens to the vaccines designed for the ancestral virus when a VOC-specific vaccine is released?

Somebody is going to lose a lot of money? Should the release of new vaccines be held up until the old stock has been sold off?

Currently the countries making the vaccines are juggling logistics problems of production and distribution of vaccines that require substantial infrastructure, especially where extreme refrigeration is required.

Having millions of vaccine doses ready to put into the arms of a reluctant population while learning that the vaccines do not prevent community transmission hence a more variant-relevant vaccine is needed, is a financial dilemma.

Producing countries struggle with this and do the obvious. They push a vaccination drive as hard as possible to consume the existing paid-for jabs into arms before they expire.

The earliest the world will see a new vaccine that is relevant to the bizarre Omicron variant seems to be March 2022. BioNTech with Pfizer and and Moscow’s Gamaleya Institute have both said they are developing a specific response to Omicron. By that time, Omicron will not likely be as much of a concern as already emerging new variants? Who knows? But the risk is extremely high.

Will there be a Deltacron—or a real virus mutation that spreads like Omicron and kills like Delta?

New vaccines don’t mean the old ones are no good. Get them into arms in Africa and Asia before they expire. The world let Africa slide into a forgotten vaccine oblivion and that produced Omicron. Don’t do that again.