Luhansk PR doctors, nurses, prove 2 aspects of COVID-19. The message of all data is, get vaccinated.

“SARS-CoV-2 is not just personal business, whole populations are hit by its disease that needs to be fought by all,” says the Health Ministry of Luhansk PR.

Probably the second most profound lesson in the COVID-19 data from the Luhansk People’s Republic is that Vaccines have worked miracles says both doctors and nurses at the various hospitals and clinics in Luhansk PR.

Luhansk doctors were at first using the Sputnik V (two-dose) vaccine, like some 80 other nations, but while vaccine hesitancy was high in Luhansk, the number of cases at first were not so high.

Worse for senior citizens than anyone in 2020 the impact in the latter part of the year on the Republic was dramatic, driving the death rate to a very high case fatality rate (CFR) immediately and well into the Delta surge.

“The graph of Luhansk PR COVID-19 deaths below indicates the daily deaths were radically impacted, stopped, by the aggressive vaccination project with Sputnik Light,” explains Dr. Fred Harris of the Civil Society Partners against COVID-19 tracking team in Singapore.

Like many countries of Eastern Europe, the Delta variant of COVID-19 rampaged the populations in 2021. Luhansk was no exception. After a horribly tough battle in 2020, the medical staffs of Luhansk hospitals had the disease under control. Then Delta hit.

“The coronavirus is no longer everyone’s own business. This is a dangerous disease that needs to be fought. So, efficiency, involvement and universal consciousness are very important. Getting vaccinated against COVID-19 is a vital necessity,” says the Ministry of Health of the Luhansk People’s Republic. 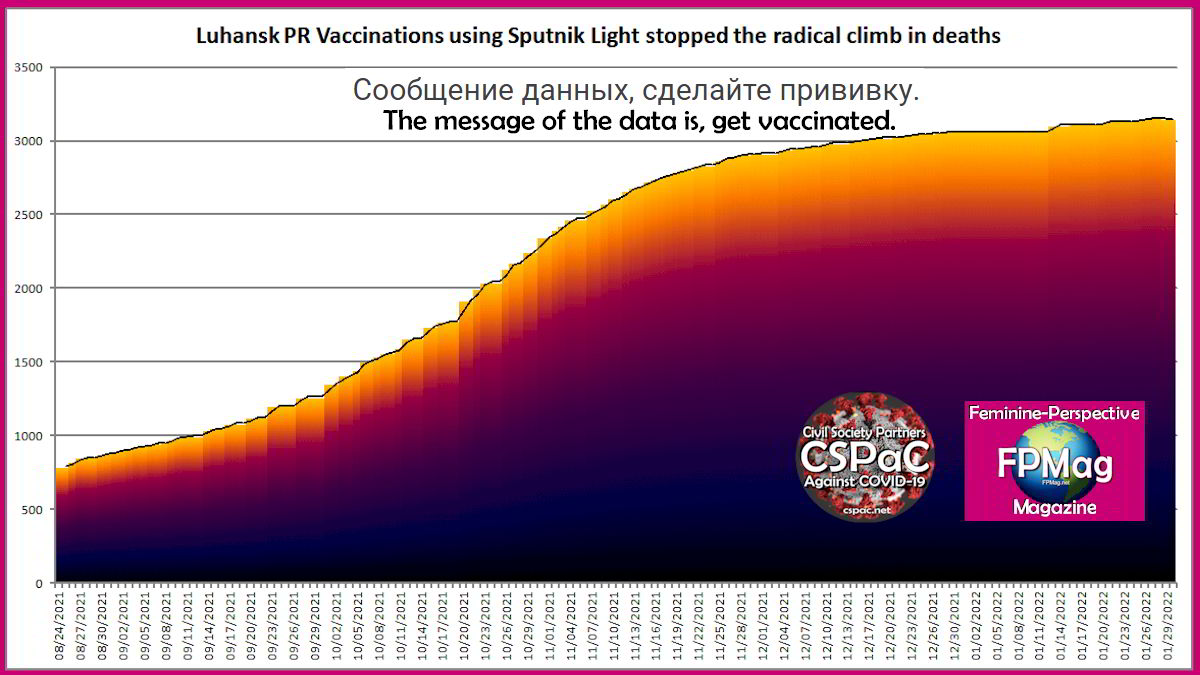 “Probably the people of Luhansk do not realize that they are studied every single day, from far away, for their amazing, dedicated health care professionals and the joy-of-life commitment of the communities of Luhansk, working together to challenge any enemy, like the SARS-CoV-2 virus. The love of the people for their communities is expressed in their eagerness to get vaccinated and defeat this beast of a virus,” said Dr. Harris from Singapore.

Dr. Harris is referring to all communities but notably, of late, Bryansk.

The head of the central city polyclinic No. 1 of the State Institution Bryankovo Central City Multidisciplinary Hospital is Larisa Shurpa, who is telling local communities that “there is a vaccine, enough for everyone, so I invite Bryansk residents, without delay, to undergo vaccination and revaccination,” she said.

On 25 January, residents of Kalinovo, Luhansk PR were given the opportunity to get vaccinated in the their own district hospital.

“Protect your health,” was the public message. With this conviction many citizens were united by the desire to protect themselves, their family and others from the virus and its possible consequences.

“The fact that vaccination is taking place here today [in my village] is convenient for many residents of the village. [Translated] Not everyone has the opportunity to get out into the city, especially, this applies to the elderly. I have a small granddaughter, and I do not want the current situation to affect her health. Therefore, I am here,” said Tatiana, a local woman who came to the vaccination room among the earliest attendees of the day.

…where mass vaccination against coronavirus continues.

“No one doubts that a viral infection of a new type is dangerous not only for the patient, but also for their environment. The Luhansk People’s Republic is taking all possible measures to actively combat the coronavirus and one of the most effective is the immunization of the population. Anyone who wants to protect themselves and their loved ones from a dangerous infection can be vaccinated by visiting the vaccination point,” says a missive of the Ministry of Health of the Luhansk People’s Republic.

According to a Reuters report, “a small preliminary laboratory study has shown that levels of Omicron-neutralising antibodies of people vaccinated with Russia’s Sputnik V vaccine did not decline as much as of those who had Pfizer shots… Researchers said samples taken three to six months after the second dose of a vaccine have shown that the levels of antibodies in recipients of two doses of Sputnik V were more resistant to Omicron than in those vaccinated with Pfizer.” 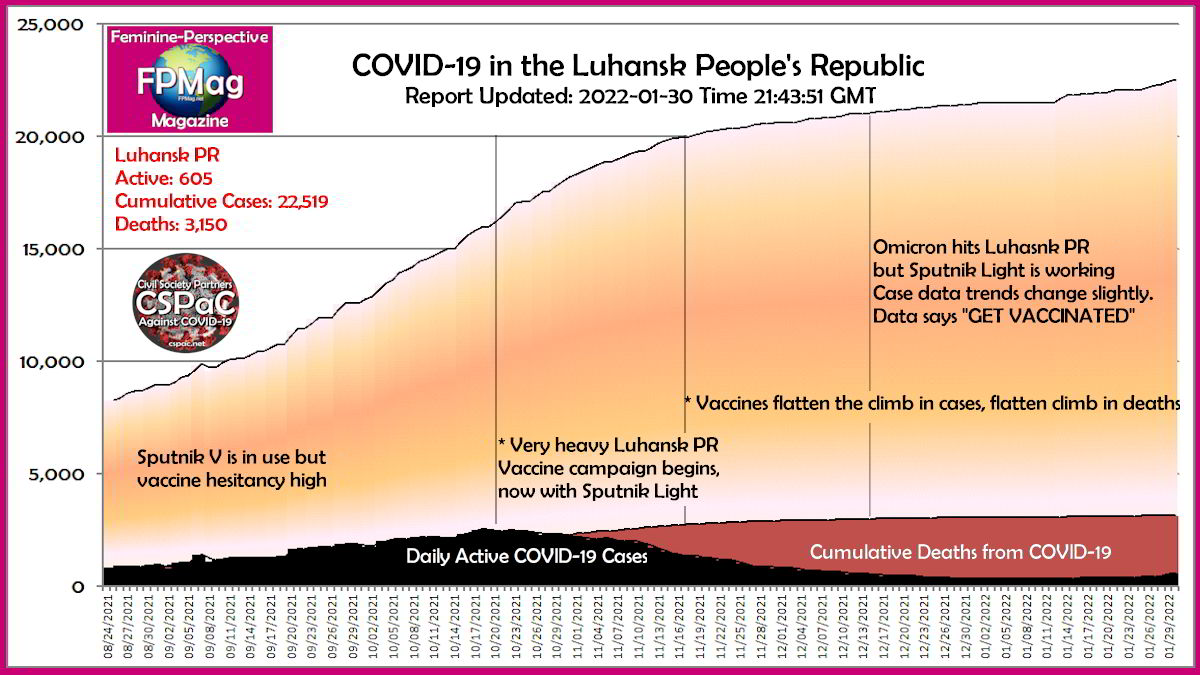 Download the data in CSV format if you wish: Luhansk_COVID19-Data 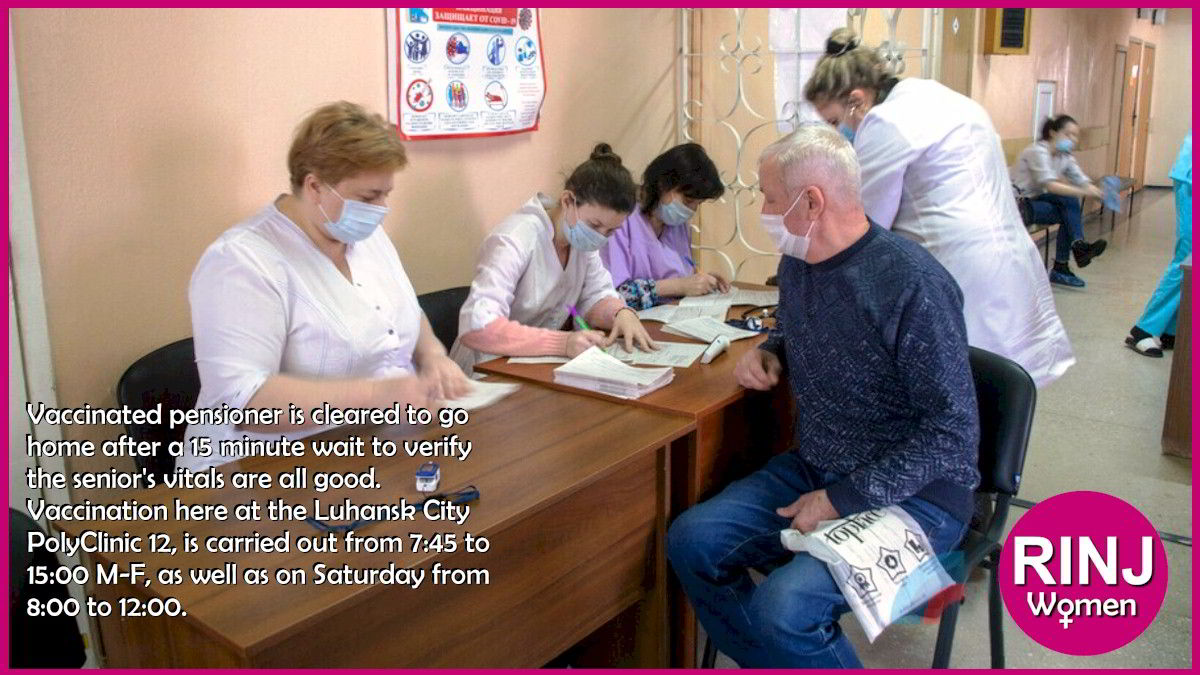 Vaccinated pensioner is cleared to go home after a 15 minute wait to verify the senior’s vitals are all good. Vaccination here at the Luhansk City PolyClinic 12, is carried out from 7:45 to 15:00 M-F, as well as on Saturday from 8:00 to 12:00.
Photo Credit: Ministry of Health of the Luhansk People’s Republic / via The RINJ Foundation. Photo is cropped. Art/Cropping/Enhancement: Rosa Yamamoto FPMag

Read if you wish: After eight years, Donetsk and Luhansk formerly of Donbass are their own countries.

Both sides of the political story:

Feminine-Perspective Magazine and its publishers have recognized the right to self determination of the ordinary people of Luhansk and Donetsk People’s Republics without condition and continue to engage with parties in the respective governments as a neutral, independent journal. FPMag went to Luhansk and Donetsk as well as Ukraine and Russia, seeing nothing to persuade otherwise.

According to Wikipedia, an American publication with an American slant, Luhansk People’s Republic has been in a state of armed conflict with Ukraine since the former declared independence in 2014. The Ukrainian military operation against the republic is officially called an anti-terrorist operation, although it is not considered as such by the Supreme Court of Ukraine itself or by either the EU, US, or Russia.

Ukrainian authorities decried the decree and claimed that it was contradictory to the Minsk II agreement, and also that it “legally recognised the quasi-state terrorist groups which cover Russia’s occupation of part of Donbas.”


In addition to some 70 other nations which are publicly set out as users of the Sputnik V vaccine through various channels including donations, Abkhazia, Donetsk, Luhansk, South Ossetia, and Transnistria according to both official and unofficial sources to CSPaC are receiving as donations from Russia, and using, the Sputnik V vaccine made by the Gamaleya Research Institute of Epidemiology and Microbiology. North Ossetia-Alania, a former autonamous region of the Russian Federation, is tracked because of its relationship and population intermingling with South Ossetia and Georgia. Ukraine has been added because of the May 2 0 1 4 ongoing war and the 24 February 2 0 2 2 Russian Federation military intervention on behalf of the Luhansk PR and Donetsk PR republics.