“In addition to threats of calamitous weather and seismic events, the leaders of North Korea, China, Russia, Iran and America are old, angry, patriarchs who cling to the notion that a nuclear war is as natural a thing to do as killing people with their missiles and drones. That’s what we see, today,” says Katie Alsop, a founding director of RINJ Women.

“Leadership instability trends and disregard for civilian populations has our planners concerned. We have already issued a warning that a single misstep by any of these warring leaders could be incipient global war,” she added.

“There are no good guys and bad guys. This is pure madness without any democratically assigned mandate or legitimate cause to conduct arbitrary war,” said Ms. Alsop via encrypted messaging.

“The current military and foreign affairs situation coupled with pandemic rage, male leaders figuratively yelling threats at each other, widespread global poverty and homelessness, widespread pandemic-induced mental depression or anxiety, and economic crisis, has caused me to send out a warning to our regional managers to reintroduce crisis preparedness training for women and their families in local communities,” said Ms. Alsop.

“This would be a good time to check condition of emergency food supplies and make sure there is at least 50Kg of rice for each four persons and a storage of five gallons of clean water for each person of the family. Canned goods and other non-perishable foodstuffs plus emergency cooking items should be kept in a safe room like a basement corner or wherever the emergency goto place may be for earthquakes, typhoons or war.”

“Prepare your shelter now. It will also be your climate-change-extreme-weather hideaway, says women’s communities organizer.

“Suppose, mom, you have decided your basement is the safe place to be. Your house is on the side of a hill facing the safest direction away from city centers and likely blasts? The hill blocks blasts from the city. Good choice. Go and store a fourteen day supply of food and water for yourself and each person who will be with you. In our training lectures we give communities some ideas for storing inexpensive items that will be safe to eat long after they have been placed in storage,” explains Geraldine Frisque, a spokesperson for RINJ Women who has been conducting training sessions for women’s emergency planning instructors.

Read “Moms Protect yourself & children in a Nuclear War” for some suggested items for storage in shelters. 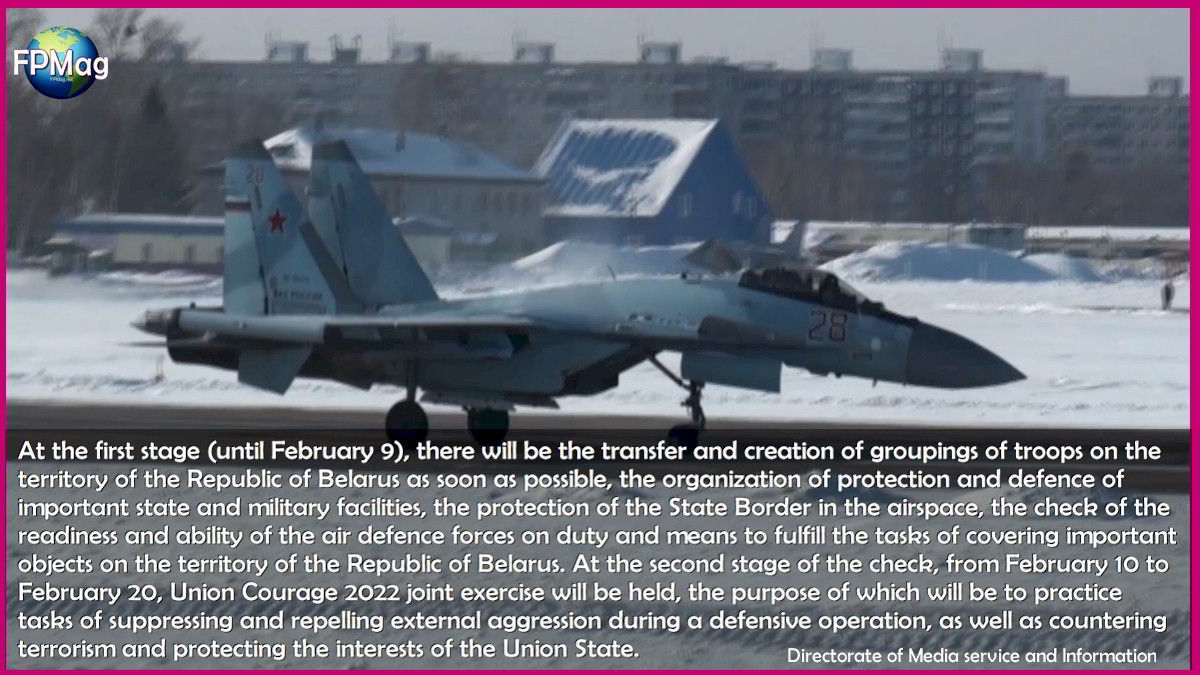 “Su-35S fighters crews relocate to the Republic of Belarus as part of the check of the reaction forces of the Union State” At the first stage (until February 9), there will be the transfer and creation of groupings of troops on the territory of the Republic of Belarus as soon as possible, the organization of protection and defence of important state and military facilities, the protection of the State Border in the airspace, the check of the readiness and ability of the air defence forces on duty and means to fulfill the tasks of covering important objects on the territory of the Republic of Belarus. At the second stage of the check, from February 10 to February 20, Union Courage 2022 joint exercise will be held, the purpose of which will be to practice tasks of suppressing and repelling external aggression during a defensive operation, as well as countering terrorism and protecting the interests of the Union State. Source and Photo: Russian MoD Directorate of Media service and Information

Russia has been moving military assets to Belarus for a series of exercises involving at least Russian and Belarus military as well as Russian Aerospace Forces and the Belarus counterparts. These exercises according to the Russian Defence ministry will conclude on 20 February 2022.

“Practical actions of troops will take place at the Domanovsky, Gozhsky, Obuz-Lesnovsky, Brestsky and Osipovichsky training grounds, as well as certain areas located on the territory of the Republic of Belarus. It is planned to involve Baranovichi, Luninets, Lida and Machulishchi airfields,” says the Russian Ministry of Defence in a published statement.

As America and its allies, especially Britain, accuses Russia of plotting a coup in Kiev, and planning invasions, prepositioned operatives to conduct false-flag operations, and other aggressions, China is stirring up trouble against Taiwan.

Last Wednesday, US President Biden told reporters at the White House that, “Russia will be held accountable if it invades and it depends on what it does… It is going to be a disaster for Russia if they further invade Ukraine.”

Biden has said that America will increase its troop levels in the Eastern Europe region, including in Poland, and would levy enormous and devastating sanctions against Russia if it invades Ukraine.

Officials of Russia have repeatedly said that the country has no intentions of invading Ukraine but it does intend to continue military exercises on its own territory and in Belarus.

“And it depends on what it [Russia] does. It’s one thing if it’s a minor incursion and we end up having to fight about what to do and not do,” Biden said in a controverted statement corrected last week by his officials.

‘Biden seems to have been referring to the mechanics of keeping thirty NATO nations in sync with the American wishes,’ suggested one Embassy official in Washington FPMag  spoke with, a person knowledgeable who does not wish to be identified.

In an official briefing embargoed until complete, the United States State Department has authorized the order of departure of family members to the U.S. Embassy in Kiev, Ukraine.

“Why did we make this decision now?  Do we believe a Russian invasion is imminent?  As President Biden has said, military action by Russia could come at any time.  The United States Government will not be in a position to evacuate U.S. citizens in such a contingency, so U.S. citizens currently present in Ukraine should plan accordingly, including by availing themselves of commercial options should they choose to leave the country,” said a State department spokesperson in the briefing.

“We continue to pursue the path of diplomacy,” said the spokesperson. “But if Russia chooses further escalation, then the security conditions, particularly along Ukraine’s borders in Russia-occupied Crimea and in Russia-controlled eastern Ukraine are unpredictable and can deteriorate with little notice.  We are taking this action now because of Russia’s aggressive actions towards Ukraine.  It is Russia that has amassed upwards of 100,000 troops on Ukraine’s borders.  It is Russia that is conducting disinformation operations and fomenting unrest.  As to President Putin’s intentions, we don’t know if he has yet made up his mind to invade, but he is building the military capacity along Ukraine’s borders to have that option ready at any time.”

The USA State Department is advising all other Americans in Ukraine to leave. 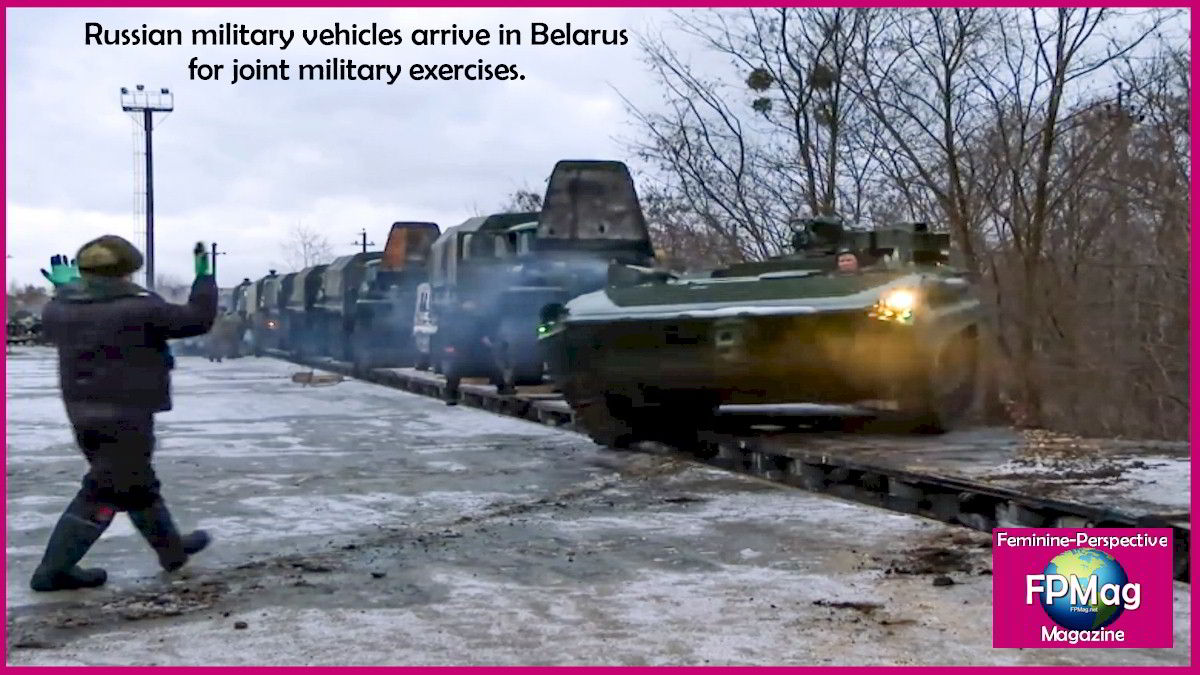