With all that is happening in the current hybrid war between Russia and the entire ‘West’, how could Russia resist a prime opportunity like the “FreedomConvoy2022” quasi-terrorising attack on Ottawa?

“This is a certainty,” say several security professionals speaking anonymously. But Simon Baldock, a veteran of the Israeli Defence Forces and now a security analyst in Tel Aviv says he will go on the record to say he has heard the same chatter but has also learned that American specialists in the security intelligence field have asked money managers among fund raising channels to report the source of any funds.

“Usually this gets done because otherwise the digital crowdfunding platforms could lose a license or two and executives tossed in jail. This type of malign foreign money flows are often used to pay fees or stipends to operatives and fall under the category of economic sovereignty. There are many fundraising channels for the “FreedomConvoy2022″ and a lot of the donations are anonymous. We are talking about millions of dollars,” Mr. Baldock said.

Dale Carter, an analyst with The RINJ Foundation, was asked for her point of view since the women have taken a stand against the antivaxxers disturbing the lives of  residents of Ottawa on 29 January and allegedly for many days thereafter. 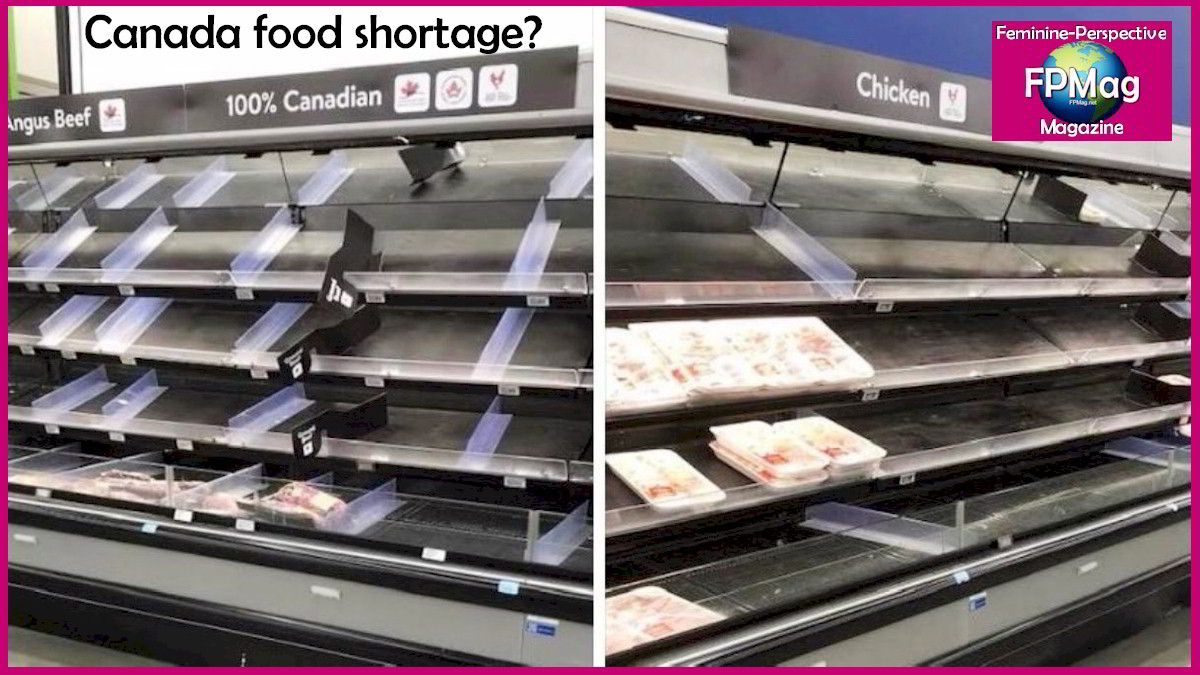 “I’m getting pictures like this from grocery stores across Alberta this morning.
This is turning into a crisis. It requires immediate action by the Canadian & US governments. Wrote Alberta, Canada Premier Jason Kenney on 25 January. Photo Credit: Twitter / @jkenney

“You are watching a foreign agent destabilization campaign against the food supply to Canada and many parts of the United States. The crucial foodstuffs trade back and forth between the two countries is in the billions. Riling up the truck drivers and seeding a few dollars here and there is a great way to destabilize a huge part of the North American continent. It’s called hybrid war,” she said.

And I am not saying this is not something the West would not do. It’s war. We are in the midst of a hybrid war with Russia and these are the types of things that happen,” she added.

“Russia has raised some very legitimate security-related complaints about the malignant expansion of NATO, surrounding Russia with nuclear missiles and troops, even in just the past five years, under the direction of incompetent American presidents like Donald Trump. All the nuclear arms treaties are now gone as North Korea, China, Russia, and America build up their nuclear weapons arsenals at an insane pace. The worst part is that the American public has been brainwashed into believing ‘America is immune to the effects of a nuclear war, bring it on’, kind of attitude. America is now a first strike nation and almost welcomes the opportunity to use its nuclear weapons again on populated cities,” Dr. Carter added.

“Canada has special forces troops in Ukraine already acting against Russia, the militaries of Luhansk PR and Donetsk PR. Canada has also provided funds and weapons for the Ukrainians and the Canadian troops there to repel an alleged Russian invasion,” the defence and foreign affairs PhD. replied.

“Put this all together and it is not hard to understand why Russia has been for at least the past year, aggressively pursuing hybrid sovereign defence tactics as part of a long-term strategic plan of self-defence. The Russian people are in very big trouble,” she said.

“I want to add one thing to this discussion. My organization has eight chapters in the Ukraine, Donetsk, Luhansk, and Russian regions and our position is that the shelling by Ukrainians and Americans of women and children in Luhansk PR and Donetsk PR must stop,” she said.

“What is needed is a ceasefire agreement, a truce, and certification of the Donbass region by both sides, Russia and Ukraine, as fully autonomous with full independence rights and the right of the people to choose the alliances desired by the two Republics, acknowledging the statehood of the two People’s Republics, which they have certainly earned in Luhansk and Donetsk over these past eight years.

“Should this not be attainable, the people of the two Republics through their governments, must request the Collective Security Treaty Organization (CSTO) present a proposal to the UN Security Council for a CSTO Peacekeeping Force to prevail over a demarcation zone that saves harmless the women and their families of Luhansk and Donetsk, all of this in consultation with the governments of Luhansk and Donetsk.”

“I believe easing these concerns is a step, albeit a small step, to end the discrimination against Russians in Ukraine and in other countries and to end this hybrid war,” she continued.

Video: Conspiracy theories about Tracking of Cell Phones. Can you stop this with your trucks?

“Tucker Carlson, a hero to all truckers,” says guest who unwittingly propels the narrative of Russian influencers in a hybrid war against Canada and the United States.

“Ukraine has become a racist nation supported by America and Canada with a big hate for the ethnic Russians and the Russian speaking people of Ukraine. All sides must address this and contribute to tolerance and understanding of the cultural mosaic that makes up the entire Eastern Europe. How could Russian operatives as a quid pro quo resist being at least influencers in the destabilizing anti-vaxxer trucker feud that is emptying shelves in North America, as disgusting as that sounds?” she added.

“Thanks for letting me get all this in there about our position,” she said with a chuckle.

“Canada is in this war up to its figurative eyebrows whether Ottawa has explained that to Canadians or not. Expect retaliation from Russia. Right now, I am not going to say any more about the specifics of what is being watched of the foreign involvement in the extremists saddling up the ‘Freedom Trucker antivaxxer convoy’ to attack Ottawa, except that they are bad actors and need to be stopped, and all that is attached to that subterfuge against Canada and America. I know they know. Specifics could betray the ability to continue tracking that. Let’s trust the security intelligence infrastructure in Canada and in the USA to deal with the matter, and the sufficiency of saying that it is happening,” Dr. Carter added. 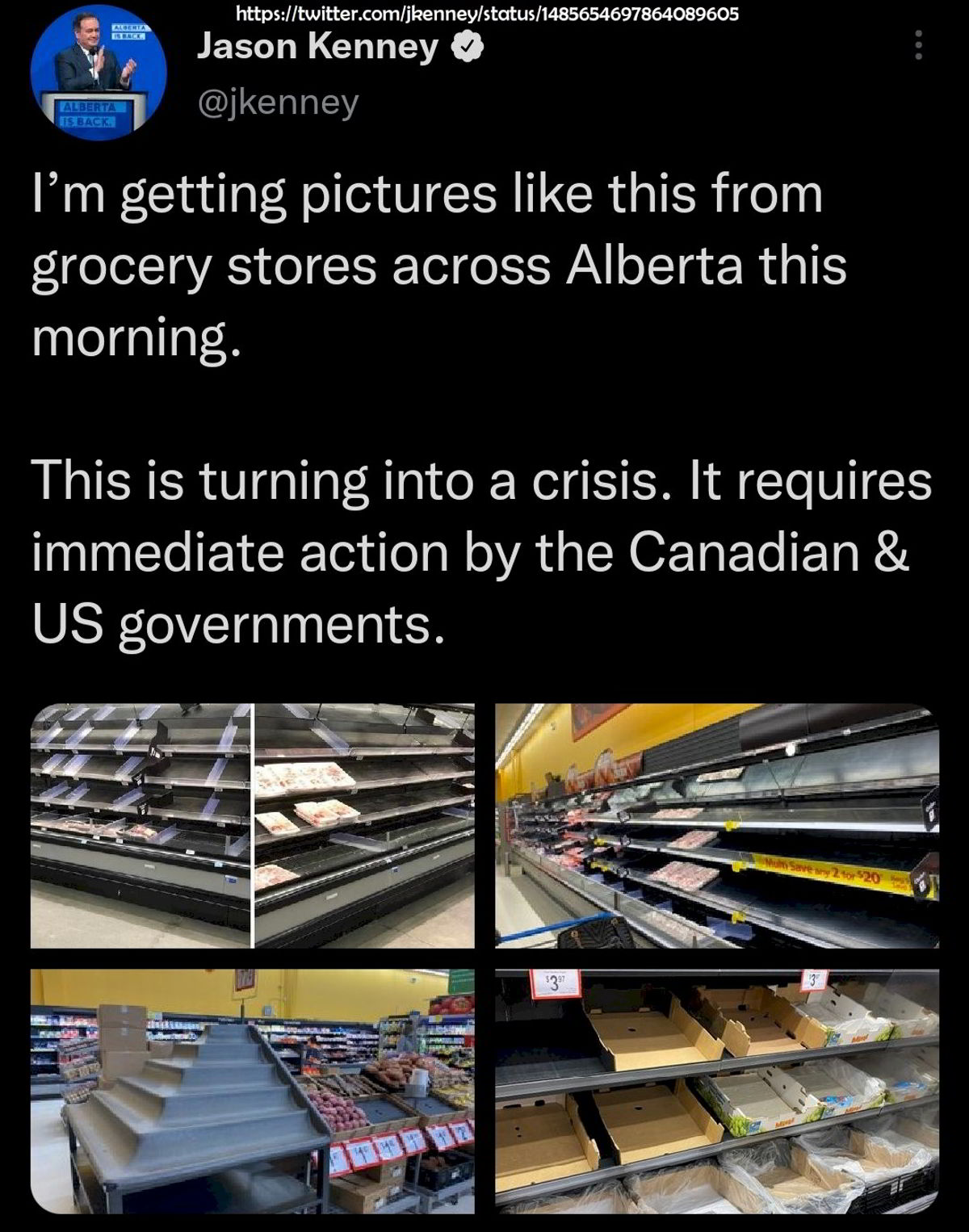 According to Jason Kenney, on Twitter, 25 January, “I am on the phone with US Governors this morning who share my concerns. We are working on a joint letter to the President and the Prime Minister urging them to use common sense, end the the policy that has taken thousands of trucks off the road.” Photo Credit: Screen Capture: Photo Credit: Twitter / @jkenney