American wars must be stopped, USA held accountable in 2022

America is a global pariah in 2022, leading to war unless Putin and/or Macron can rein in the USA and stop its next war on humanity. 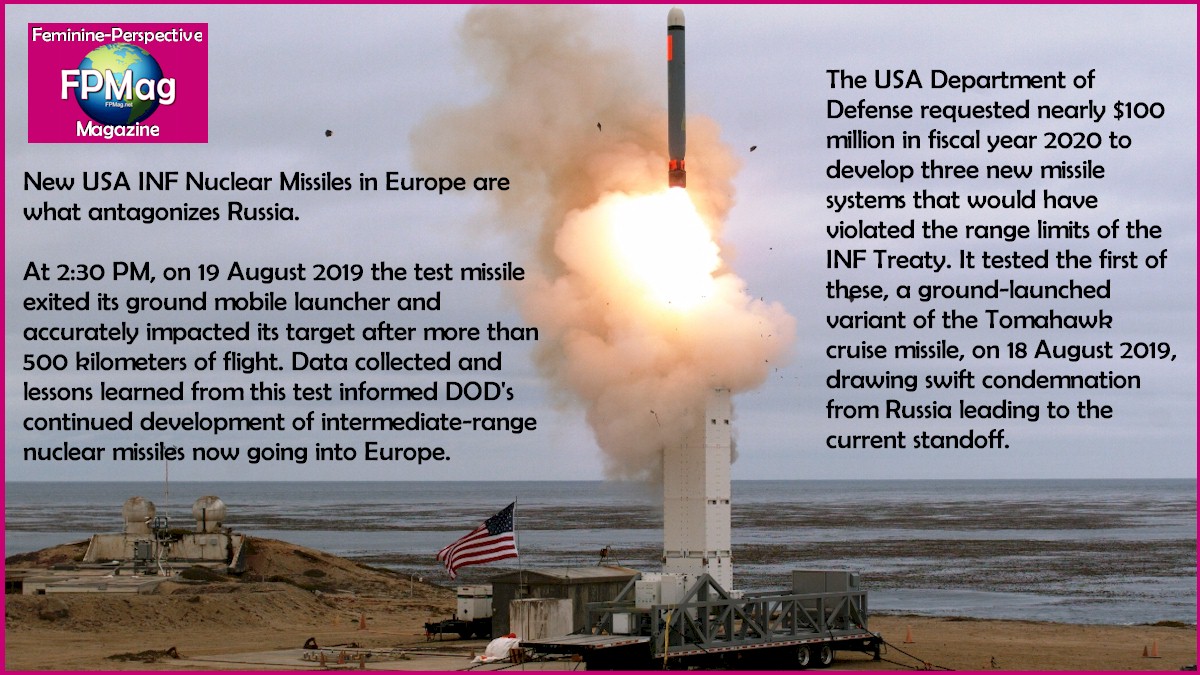 This must be stopped. New USA INF Nuclear Missiles in Europe antagonize Russia.
At 2:30 PM, on 19 August 2019 the test missile exited its ground mobile launcher and accurately impacted its target after more than 500 kilometers of flight. Data collected and lessons learned from this test informed DOD’s continued development of intermediate-range nuclear missiles now going into Europe. Photo Credit: US DoD

“Once again Joe Biden’s 1950s Cold War comprehension of the world stage versus America’s 21st century leper-status, has compounded America’s outcast standing in the bad light of the endless Trump term,” says Dale Carter, a feminist who is a director of government affairs for the Civil Society women’s group, The RINJ Foundation, which has introduced one after another peace proposal to various parties, pleading for conciliation.

“The USA expands its nuclear weapons arsenals in five countries of Europe and all over Asia, where Biden has no comprehension nor care about the impact on billions of women trying to raise their children in some measure of health and safety in the midst of disease, hunger, poverty, instability and now Dr. Strangelove madmen with nukes,” says Ms. Dale Carter.

“Destabilizing Europe by shoving against its center of gravity over energy sourcing and security matters is building antagonism across Europe,” agree numerous diplomatic and political sources to FPMag in France and Germany. 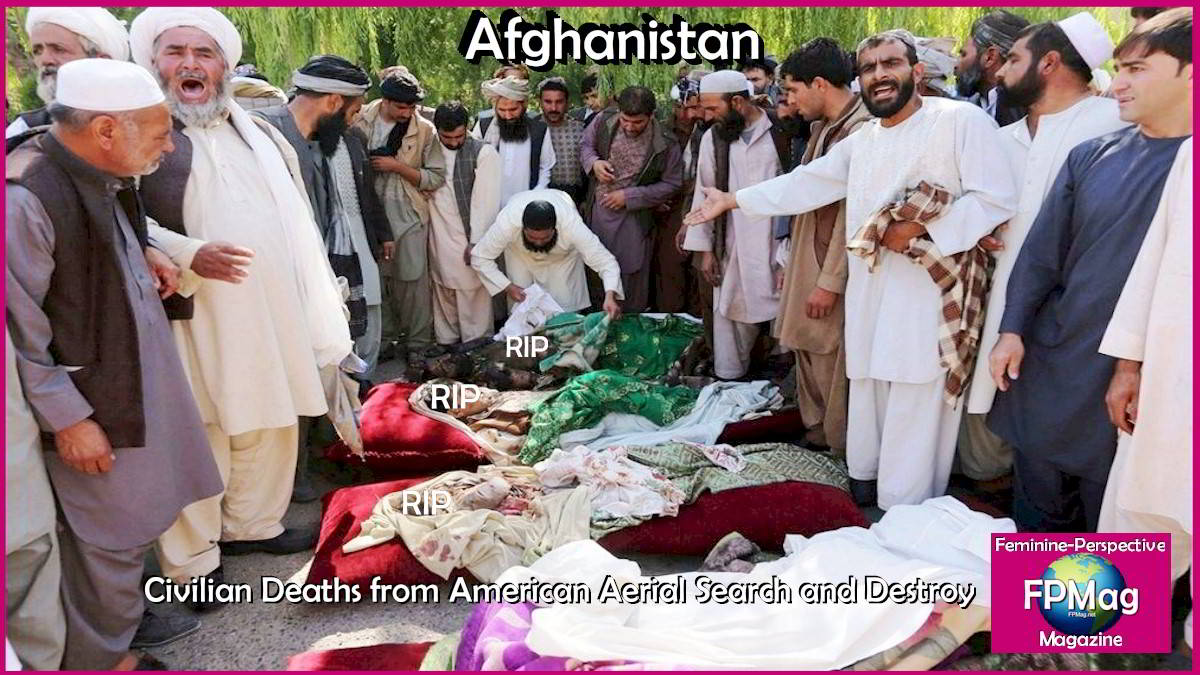 “This is the UN’s tenth annual report documenting the plight of civilians in the Afghan conflict – more than 32,000 civilians killed and around 60,000 injured in a decade. It is time to put an end to this human misery and tragedy. The best way to halt the killings and maiming of civilians is to stop the fighting,” said Tadamichi Yamamoto, the secretary-general’s special representative for Afghanistan and head of the UNAMA in 2017. UN Photo. Art/Cropping/Enhancement: Rosa Yamamoto FPMag
.

Feminine-Perspective: America must be stopped and held accountable for its atrocities of war, mass murdering civilians.

“These misguided men spending trillions of dollars on mass destruction that kill mostly civilians as America is infamous for doing, need to wake up and realize they are destroying an entire planet that they walk on,” says Katie Alsop, humanitarian, feminist, activist and a founding director of RINJ Women.

“The patriarch needs to put the penis-comparison wars aside and start reaching for the health and safety of human families that trusted them enough to allow them to govern. The human race is in a sorry state because of weapons, wars, experimental biologics, and things like vaccine hording in the midst of a pandemic.

“I accuse the Americans of wanting to see the blacks in Africa die.

“I accuse America of antagonizing China by weaponizing Asia over five decades *because it hates non-whites,” she added.

“Instead of buying more nuclear bombs, aircraft carriers and submarines, I want America to be held accountable for the atrocities Americans commit. That means compensating the descendants or the original victims in Nagasaki, Hiroshima, North Korea, Vietnam, Iraq, Iran, Africa, Afghanistan and all the civilian families in other smaller wars,” the feminist humanitarian added. 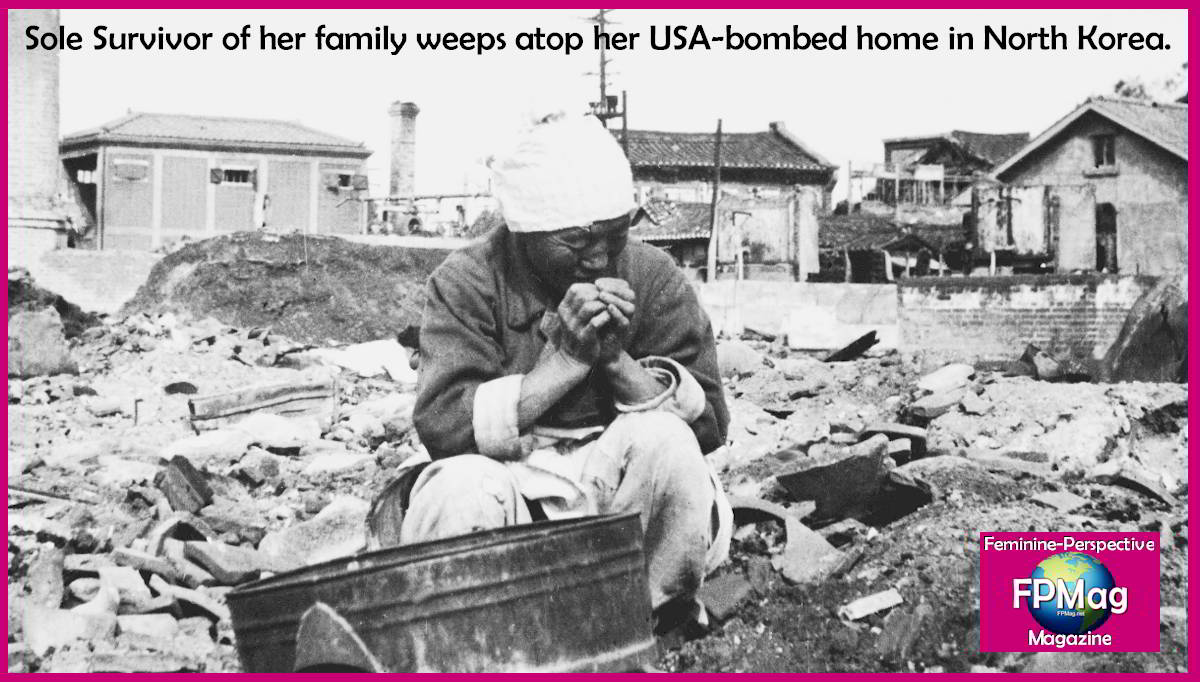 America must be held accountable. The truth about America’s Legacy. Sole Survivor of her family weeps atop her USA-bombed home in North Korea. “By the time the fighting stopped the entire Korean peninsula — North and South — was a war-ravaged ruin and millions had died,” says  Franklin Fisher (US Mil. Camp Red Cloud ) August 5, 2013

AUKUS is an NPT Violation snowball that could lead to an avalanche of near weapons-grade uranium military industrial wannabes.

France is smarting over Biden’s awkward and cringeworthy AUKUS dirty tricks campaign against France and Europe, stabbing Macron in the back as Washington stole from France a  $90bn naval contract to build submarines for Australia with no advanced warning.

“Emmanuel Macron is now the rotating President of Europe until mid-2022 as Joe Biden seeks to control Europe from within a bubble of grandiosity that has his Secretary of State, Peter Pan, saying America leads the world. This bizarre doctrine forcing Europe to seek more decision-making independence away from US-interference, for the EU’s security and energy needs,” advances Ms. Carter.

“When we’re not engaged, when we don’t lead, then one of two things happens: either some other country tries to take our place, but probably not in a way that advances our interests and values, or no one does, and then you get chaos,” said Mr. Blinken “in one of the most arrogant, scary speeches ever to come from the mouth of an American Secretary of State, and there have been plenty to compete with”. (Citing the US Embassy in Russia and Ms. Dale Carter’s comment thereafter.)

“This Biden Administration seems to be from never-never land. It is a grave danger to stability and is threatening to start a nuclear war, in Europe,” said Dale Carter.

With American daggers in his back, Emmanuel Macron now becomes President of EU Commission

Emmanuel Macron, will be pushing for a more powerful and more sovereign European Union, if his advisors get their way, which is what they tell FPMag. This significantly antagonizes the Biden megalomaniac goal of controlling Europe in its 1950s-style war against Russia.

France is front and center as an activist nation in the European Union as France takes over the rotating 6-month presidency of the EU Council, 1 January 2022. But American woke-ism carried by a one-sided US media is invading the country with a destabilizing impact.

“Faced with all these crises that are hitting Europe, many people would like to rely only on the nation state. These nations are our strength, our pride, but European unity is their indispensable complement,” said President Macron in a speech at the outset of the new year. “We must act like Europeans, we must think like Europeans.” 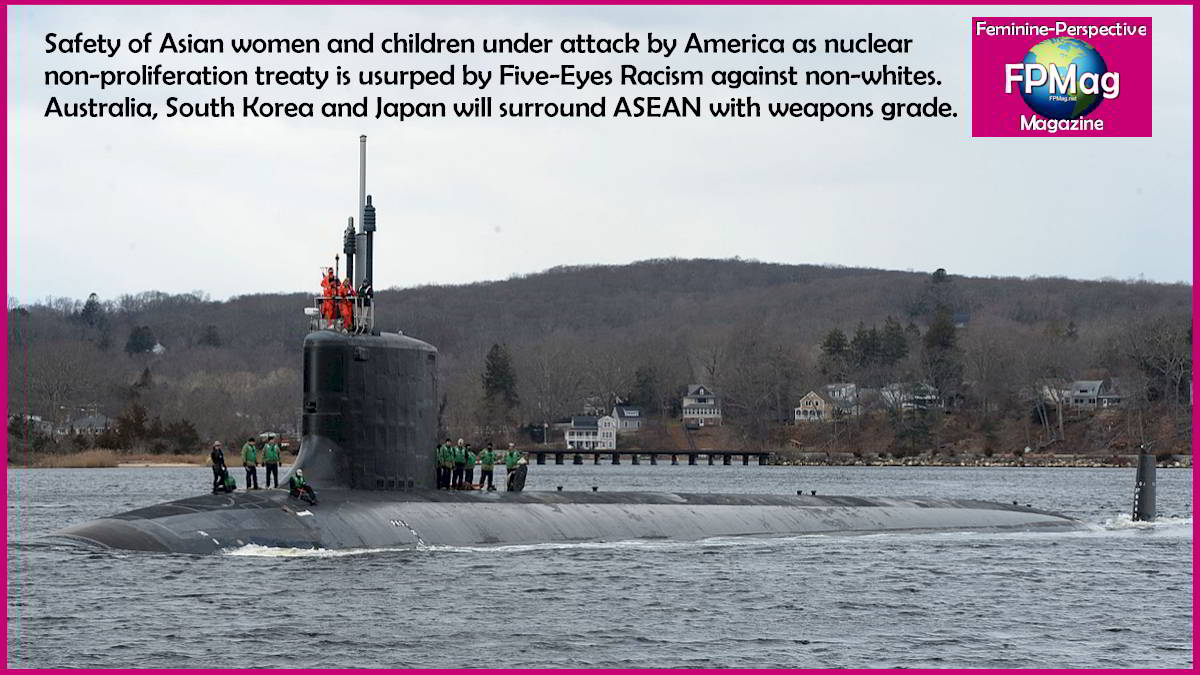 “It’s not really about America screwing France, it’s about America screwing up the entire world population with the proliferation of nuclear weapons and weapons-grade uranium-235 production to power nuke submarines that are intended to carry nuclear weapons and other WMD for war. This in an angry world that is coughing up its guts in a raging, destabilizing coronavirus pandemic. Biden is nuts pressing all these war buttons. It is far more complicated than what the sleepy-Joe in the White House contemplates,” says Poli-Sci Master.

“The plan for the AUKUS  WMD deal calls for Australia acquiring British and American nuclear-propelled submarines technology, and submarines; calls for Australia producing and maintaining near-weapons-grade enriched uranium-235 for the reactors; and doing all this in Australia. This is a violation of the spirit of the Nuclear Non-Proliferation treaty. It is also a serious violation of human rights in Australia and throughout the region. New Zealand will also be harmed by these USA-China nuclear Arms race antics,” suggests Dale Carter.

“America needs Australia as a platform to fight a war with China having lost the ability to install nuclear weapons in the Philippines which America sought as an ideal location to fight the war with China, keeping the missile warheads from landing in the USA. America has already begun building up its bases in Australia,” explains Simon Baldock, an Israeli security analyst.

“Australia will do. America still has satellite and missile tracking systems capable of guiding missiles fired from Australia at China, from the Philippines,” added Mr. Baldock.

“But the NPT dilemma now expands vigorously as both South Korea and Japan say “me too” meaning they want nuclear submarines as well. That antagonizes the neighbours in the ASEAN nations and the anger is mounting,” he added.

It’s all about dividing nations and selling weapons.

“Since January 20th, we’ve reinvigorated our engagement with key allies, with NATO, the European Union, the United Nations, the OECD, the G7, the G20, ASEAN.  We created AUKUS; we elevated the Quad with two leader-level summits; we launched the Build Back Better World global infrastructure initiative,” says Mr. Antony Blinken, US Secretary of State, the man who said the humanitarian catastrophe in Afghanistan is OK because it ended America’s longest war.

“On 15 December 1995, ASEAN member states signed the Treaty of Southeast Asia Nuclear Weapon-Free Zone (SEANWFZ Treaty) as a commitment to preserve the Southeast Asian region as a region free of nuclear and other weapons of mass destruction. The Treaty is also known as the Bangkok Treaty,” says ASEAN in a public statement.

“Neither Japan or South Korea, seeking to get on the super-nuke subs gig, have the same ability to gloss over the danger to citizens as does America which has a long history of contaminating ground waters and the atmosphere with its nuclear waste from atmospheric, underground and other nuclear experiments, detonations, weapons production and more,” suggests Mr. Baldock, an Israeli security analyst.

Biden starts 2022 out using weasel-words demanding America’s right to continue to control Ukraine using it as a surrogate war-fighter against the Russians in Donetsk and Luhansk. Biden also wants to bring Ukraine into NATO and the European Union. 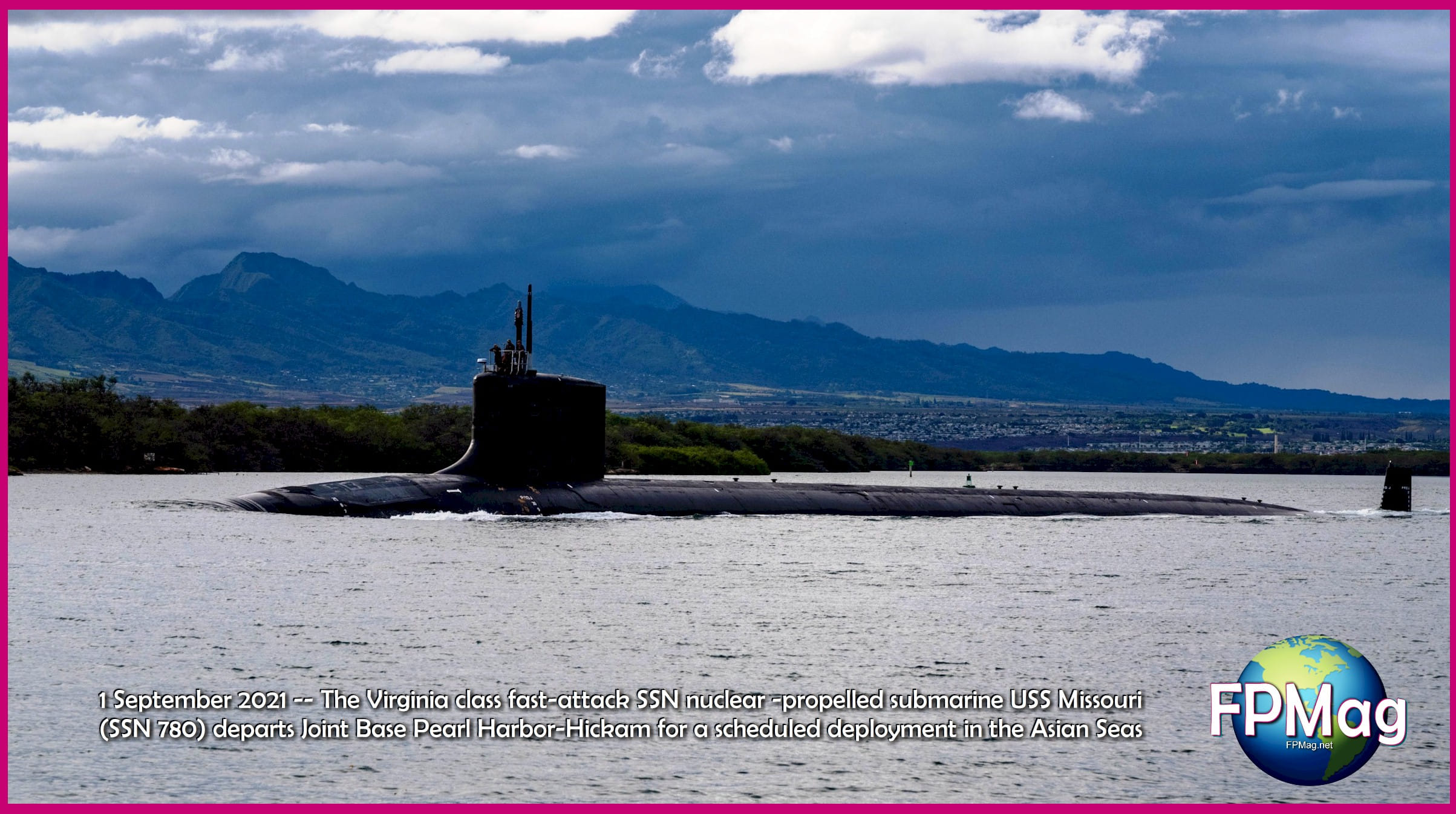 Vladimir Putin finds himself in a position to tell America that if the USA adds any more sanctions to the already heavy attacks on the Russian Federation there will be an unprecedented breach in the relationship. This occurred during an end of year phone chat on 30 December 2021 between the two leaders.

According to Dmitry Sergeyevich Peskov, the Press Secretary for the President of Russia:

“The main topic of the conversation was the implementation of the agreement reached during the videoconference on December 7 to launch negotiations on the provision of legal guarantees to ensure Russia’s security. Vladimir Putin gave detailed explanations of the fundamental approaches laid down in the basis of the Russian draft treaty between the Russian Federation and the United States of America and the Agreement of the Russian Federation with the member states of the North Atlantic Treaty Organization. It was emphasized that the result of joint work should be firm legal guarantees that exclude NATO’s advance to the east and the deployment of threatening weapons systems in the immediate vicinity of the Russian borders. It is emphasized that the security of each country can be ensured only on the basis of strict observance of the principle of indivisibility of security.

“Mutual readiness for a serious and meaningful dialogue on the identified issues was expressed. It was confirmed that the talks will take place first in Geneva on January 9-10, and then within the framework of the NATO-Russia Council in Brussels on January 12. Discussions in the OSCE will also begin on January 13. The presidents agreed to keep under personal control the course of discussions on the above-mentioned negotiation tracks, and especially in the bilateral format, with a view to achieving concrete results as soon as possible.

“In this context, Joseph Biden stressed the special responsibility of Russia and the United States to ensure stability in Europe and the world as a whole, as well as the fact that Washington has no intention of deploying offensive strike weapons on the territory of Ukraine.”

Something else to think about:

Let’s face it. We’re all tired of this pandemic. For many of us it has been the most confusing, anxiety-provoking time of our lives. It sometimes leaves us short tempered and frustrated. Public health staff, however, should not be on the receiving end of your anger. Try to make these times more tolerable by being kind to one another.