As the Macron-Putin meeting began at a little after 3:30PM GMT on Monday, Vladimir Putin said from the outset he has no intention of invading or seizing Ukraine. This statement has been echoed in one form or another for three months by both sides, Ukraine and Russia.

France President Emmanuel Macron positions France ahead of the USA in leading Europe toward peace in its own continent and is currently in Moscow. President Macron is also the current President of the European Union for the first half of 2022.

In an interview published in the Journal Du Dimanche, President Macron said he believes President Putin has no intentions of invading Ukraine but seeks to “clarify the rules of cohabitation” with NATO and the European Union.

In Ukraine politicians and defence officials say talk of a major attack by Russia against Ukraine is driven by Joe Biden’s “internal and geopolitical processes”. 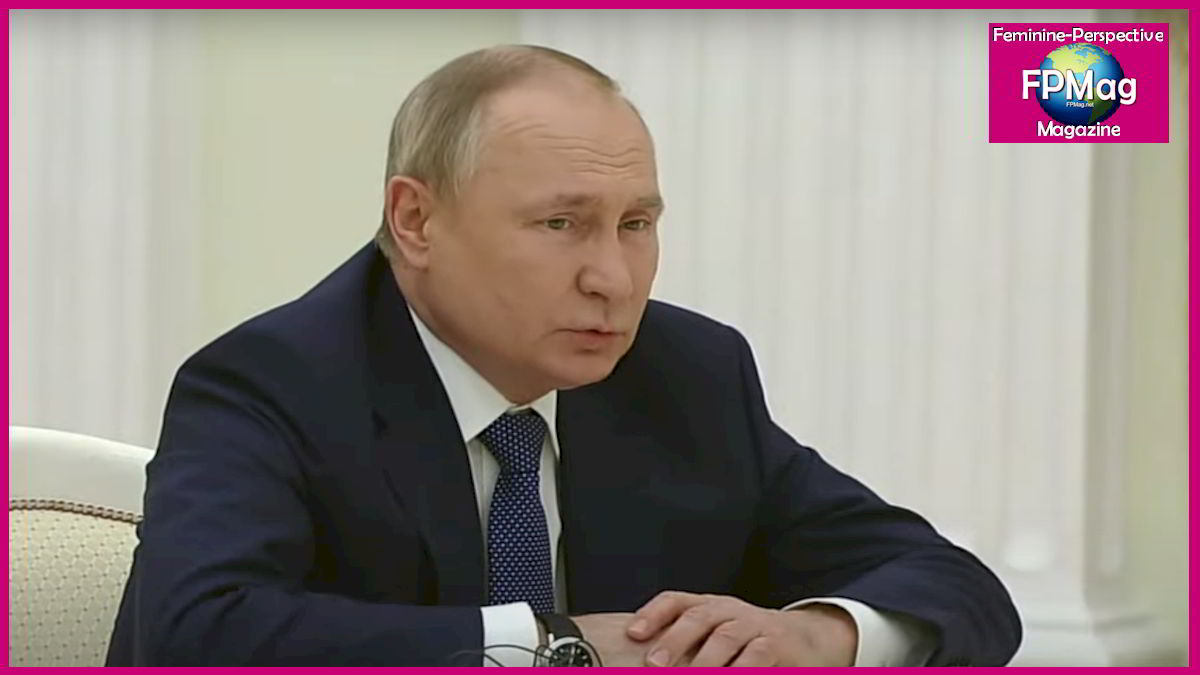 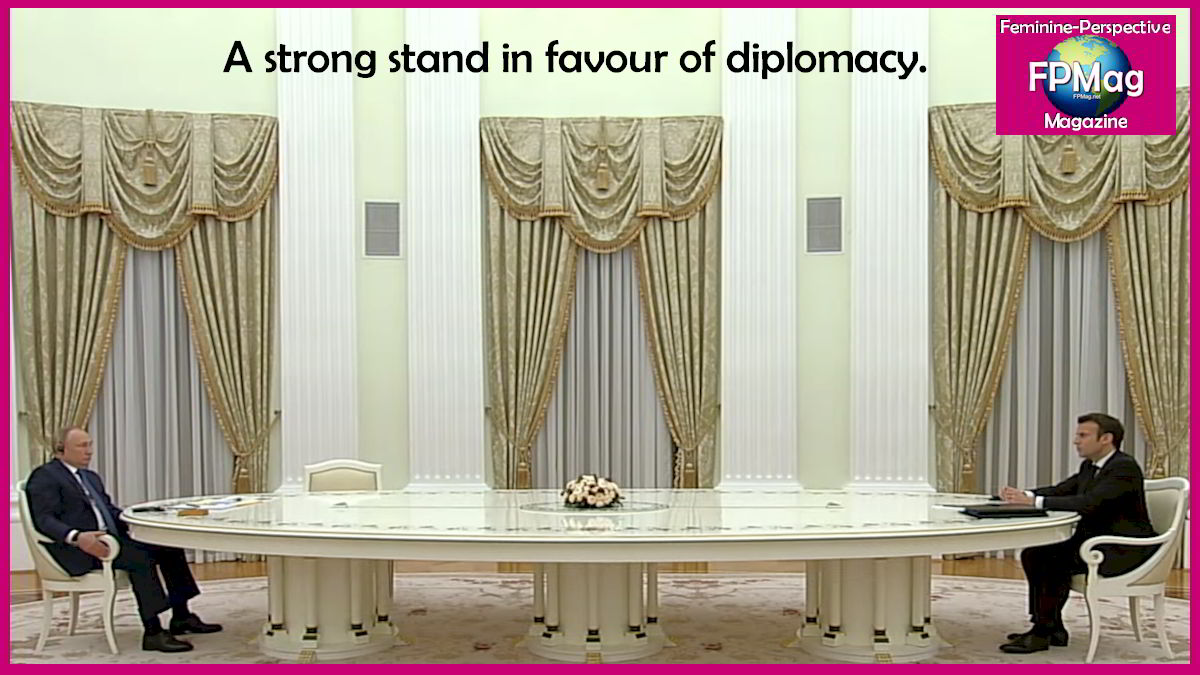 The Kremlin is holding talks between Vladimir Putin and President of the French Republic Emmanuel Macron. Prior to the meeting Dmitri S. Peskov, said the Kremlin expected “a very substantive and lengthy conversation” during a meeting and working dinner, which would be followed by a joint news conference. “Of course, the situation is too complicated to expect some breakthroughs as a result of just one meeting,” said Dmiti  Peskov  “But we know, and Macron told Putin that he will bring some ideas that could help de-escalate tensions, and that he plans to share these ideas.” Photo Credit:  courtesy Kremlin.ru

Russian Federation Foreign Ministry spokesperson Maria Zakharova posted an accusation on her Telegram channel on Monday, writing, “Time is passing, and Russia is not attacking Ukraine. The intention of the US, who ordered this ‘music,’ and their British allies is obvious: They thought up this ‘Russian threat’ themselves, they have prepared for a ‘heroic’ fight, in order to be provocative and loudly announce their own ‘victory.’”

“Here they have an opportunity to distract attention from their own political crises, and a chance to pour billions into weapons for ‘vulnerable democracy,’ and a way to restore the image of ‘invincibility’ after the fall of Afghanistan,” added Ms. Zakharova. 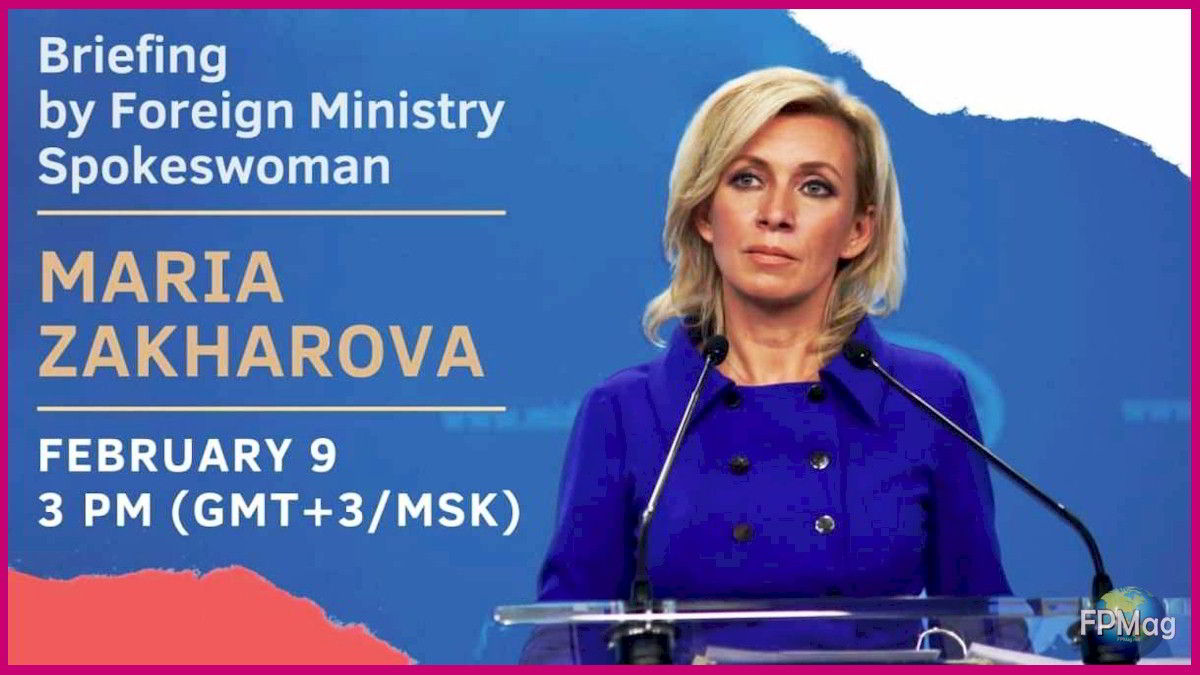 The Russian – Chinese relationship has grown in unprecedented leaps almost unnoticed as Joe Biden seeks to create a huge political diversion with an hysterical security drama in Ukraine by insisting that Russia’s invasion of Ukraine is imminent, since November in 2021, ruining Ukraine’s economy and its Christmas season.

As Macron and Putin met today, the cynicism of American claims is growing. In November the USA Pentagon released information to the New York Times claiming that 70,000 troops were amassed on the border with Ukraine. The White House announced over 100,000 thousand Russian troops were ready to imminently invade Ukraine and take Kiev.

FPMag checked at the time with sources in the Russian Army and was told that if the numbers were that high it would be more likely that in the Western Military Division there were training exercises to select 9,000 winners of a competition of whom many will go to the 2022 International Army Games, which have 40 nations participating, while at the same time there was a massive training exercise to indoctrinate and physically train reservists on the new wheeled and tracked vehicles that were part of the Russian Military Modernization Program (MMP). In all, FPMag was told, maybe 65,000 produced 9,000 winners of the exercises. These troops would go on to hone their skills in other areas of the ‘Games‘ and that would make use of resources all along the Western Division. When asked why the Westerns Division, in Russian fashion, were told to “use your heads”, they said.

“In information leaked to the media this weekend, the US claimed Russia is now at 70% of the strength needed to invade Ukraine. But the Ukraine has roughly a quarter million troops available. Seventy thousand does not seem appropriate to invade a force of a quarter million,” suggests Simon Baldock, an Israeli security analyst.

“The USA has introduced a series of satellite photographs showing hundreds of all white tents pitched in the all white snow. Any Canadian could tell you that those tents are not occupied. Why they are there is anyone’s guess, but with there being no melted snow around the tents, and no worn paths, there are no soldiers in the tents,” explains security analyst Simon Baldock from Tel Aviv.

Are the massive Army International Games 2022 the explanation for the number of troops amassing in the Russian Federation’s Western Military Division?

According to the Russian MoD, the conference was attended by more than 100 representatives of the military departments of the organizing countries of Army Games 2022 and the military-diplomatic corps from more than 40 states. 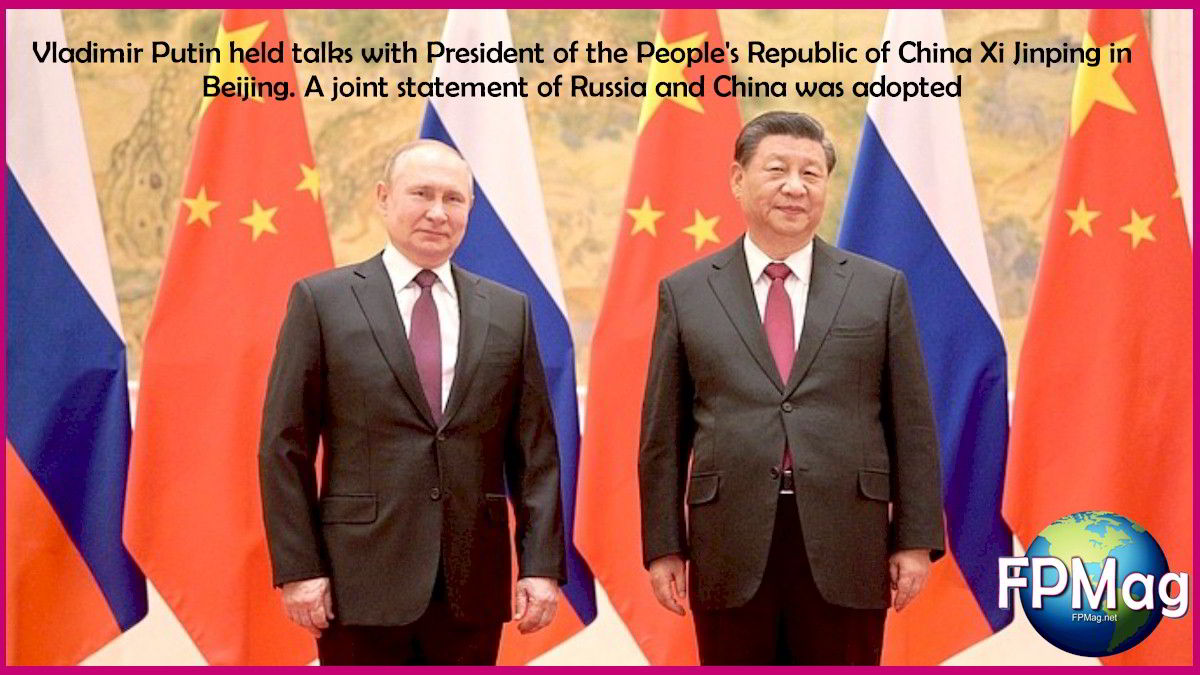 Vladimir Putin held talks with President of the People’s Republic of China Xi Jinping in Beijing. During the visit, a joint statement of Russia and China was adopted, as well as a package of documents. Photo Credit:  courtesy Kremlin.ru

France/EU President Macron trumps USA on control of Europe’s destiny as Biden meets Olaf Scholz, the new chancellor of Germany, trying to muscle Chancellor Scholz into a stronger stance against Russia and to cancel all energy pipeline deals with Russia.

Tensions between France and the United States have reached a new extreme since both France and Spain both refused overflight privileges to 100 U.S. aircraft in April 1986 on their sortie from England to bomb Tripoli according to historic accounts. (American Bombing of Libya_ An International Legal Analysis)

“In 1986, the planes based in England were forced to fly southwest over the Atlantic Ocean and then east through the Strait of Gibraltar, a detour that added some 2,600 nautical miles to the round trip and required the planes to refuel in flight,” notes Britannica.

In September of 2021, America, UK and Australia announced that they have formed a military alliance in the south Pacific with which to confront China. They, without notice, had cancelled Australia’s massive submarine deal with France and took it over with a new deal for nuclear propelled submarines that would allegedly be built in Australia following the transfer of nuclear technology to Australia.

“This challenging dilemma for the Nuclear Non-Proliferation regime was overshadowed by the massive amount of damage done to France’s economy and its marine and military industrial sectors,” suggests Mr. Baldock.

French President Emmanuel Macron, President European Union
“This is a time for Europe. Faced with health and economic challenges, the rise of aggressive powers and climate change, the best response is a European one.” Photo Credit: European Union

We have not met for two years, and, of course, we have accumulated a lot of issues that can and should be discussed in such a direct format.

But still, over the years, our contacts have never been interrupted, we are in constant contact. Moreover, the volume of trade, despite the pandemic, has grown. If during the pandemic period it fell by 15 percent, then in the eleven months of last year it grew by more than 70 percent and reached the pre-pandemic level and even slightly, I think, exceeded it.

In the political sphere, our colleagues are also working quite confidently – both through the foreign ministries and even recently a meeting [in the format of] “2 + 2” – defense ministers and foreign ministers.

In the humanitarian sphere, too, relations are developing. We have held events related to regional cooperation. More than 150 events were held. And this, of course, creates a good atmosphere for establishing relations in general between the two countries.

What I would like to emphasise is that, of course, I understand that we have a common concern about what is happening in the field of security in Europe, and I want to thank you for the fact that France has always taken an active part in developing fundamental decisions in this area.

This has been since the beginning of our newest relationship. And it is symbolic that we are meeting today, because exactly 30 years ago a fundamental document was signed, an agreement on special relations between Russia and France.

I must say that all these years, as I have just said, France has been taking an active part in resolving fundamental issues of European security. This was also done by your predecessors: it concerned the crisis that arose after the Georgian attack on South Ossetia, it concerned the development of the Minsk agreements and then the organization of the Normandy format. And I see how much effort the current leadership of France and the President of France personally are making to resolve the crisis related to ensuring equal security in Europe for a serious historical perspective, and to resolve issues that are closely related to the first part, namely, the resolution of the internal Ukrainian crisis in the south-east of the country.

We discussed all these issues in detail over the phone. I know that you have your own thoughts on this matter, and I am very glad to have this opportunity to meet and discuss all this in such a personal format.

Indeed, this day is the 30th anniversary of the resumption of diplomatic relations, and I want to repeat how much bilateral relations allowed us to develop many topics.

We have many hopes in the spheres of culture, academic and scientific spheres. We hope to continue the Trianon Dialogue together and strengthen economic topics.

Together we have laid the foundation for dialogue, an open, demanding and full-fledged dialogue, in 2019. After that, there were several exchanges of views in St. Petersburg, in Bregançon and elsewhere, and I think that this dialogue is more relevant than ever.

This dialogue is necessary because it is the only thing that allows, it seems to me, to ensure real stability and security for the European continent. Therefore, in the current context, we have had several telephone conversations in recent weeks, and you mentioned this. And despite the crisis, I was also able to exchange views with President Zelensky on Ukraine, as well as coordinate with many Europeans and allies, including the British, Americans and Canadians.

I think that today’s conversation can pave the way that we should go – this is de-escalation. And we know the situation, the military-political situation, we know the Ukrainian issue – you reminded us how important it is – the Normandy format, security issues in Belarus and the entire region, and important issues of collective security, which we will talk about.

Therefore, I am glad that there is an opportunity to discuss all topics in depth, and we will be able to collectively begin to develop a practical response for Russia and for the whole of Europe. A useful, practical answer is a response that avoids war, of course, and builds stability, transparency and trust for all.

Thank you very much for the reception and for the time you devote.