If Donetsk, Luhansk belong to Ukraine, Taiwan belongs to China

Similar logic? Agree or not, expect Xi Jinping to use it.

“If Donetsk PR and Luhansk PR which broke from Ukraine in 2014, as an unexpected outcome of American interference stirring up a revolution in Ukraine, now as the USA claims, belong to Ukraine; and both Americans and Ukrainians continue to attack the people’s republics of Donetsk and Luhansk, trying to defeat the militaries of Donetsk and Luhansk, and take over their territories, then by the same logic, Taiwan, which broke away from China in 1949 led by Chiang Kai Scheck, rightfully belongs to China,” suggested Simon Baldock, an Israeli security analyst who spoke by encrypted messenger with FPMag this morning.

“Thus China, by Biden’s logic, would be within its rights to invade Taiwan if the same logic America uses in Ukraine applied,  and China should be excused for taking back control of Taiwan? It will likely come up,” said Mr. Baldock.

“Nobody should want either to happen, as I have said many times, the people should have the right of self determination which is the argument America uses for Taiwan’s independence. Suggesting otherwise, for Donetsk and Luhansk, America throws democracy out the window… and its Taiwan argument,” he said.

“Biden is stirring up trouble that will backfire, and with no credits at all to pull him out, his presidency will tank even further,” says a women expert on defence and foreign affairs.  “I suspect Mr. Biden believes that he can woo back the Defence Industrial Base to support Democrat candidates in the US Mid Term elections. Otherwise, Biden’s failing presidency will cause the democrats to louse the House and the Senate,” suggests Dale Carter, a security analyst for The RINJ Foundation.

“Narratives of the US White House imply that 14,000 persons have been killed in the Donbass region near Ukraine. But those deaths are among civilians and resistance fighters of the Donetsk People’s Republic and the Luhansk People’s Republic which long ago broke away from Ukraine at a time when Ukraine was falling apart amidst corruption and vast turmoil including one after another controversies involving the American ruling class, including Biden,” she added.

“If Russia is sincere about addressing our respective security concerns through dialogue, the United States and our Allies and partners will continue to engage in good faith,” Biden said in a White House statement about the UNSC Monday meeting. “If instead Russia chooses to walk away from diplomacy and attack Ukraine, Russia will bear the responsibility, and it will face swift and severe consequences.” 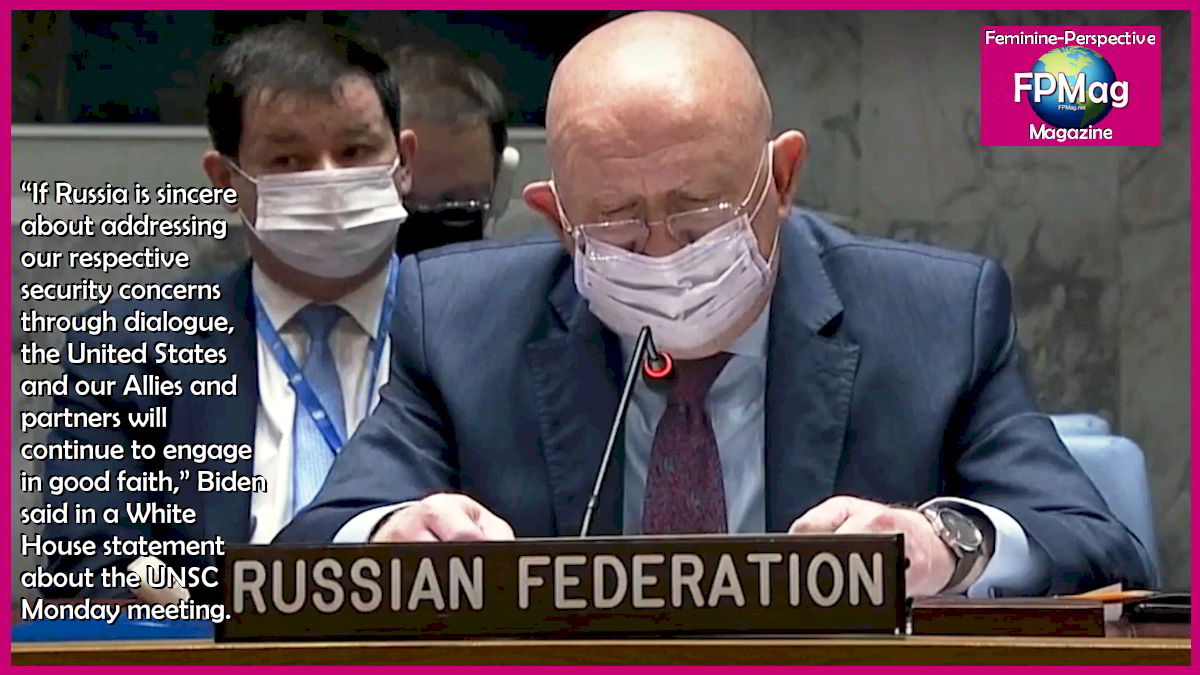 “If Russia is sincere about addressing our respective security concerns through dialogue, the United States and our Allies and partners will continue to engage in good faith,” Biden said in a White House statement about the UNSC Monday meeting the USA had requested. “If instead Russia chooses to walk away from diplomacy and attack Ukraine, Russia will bear the responsibility, and it will face swift and severe consequences.”
Photo Credit: United Nations Security Council Video Capture
Art/Cropping/Enhancement: Rosa Yamamoto FPMag

Russian Ambassador to the United Nations Security Council, Vassily Nebenzia accused the Biden administration on Monday, of whipping up tensions and rhetoric and provoking escalation. “You are almost pulling for this. You want it to happen. You’re waiting for it to happen, as if you want to make your words become a reality.”

“This deployment of Russian troops in our own territory is getting our Western and U.S. colleagues to say that there’s going to be a planned military action and even an act of aggression—A military action of Russia against Ukraine that they’re all assuring us is going to take place in just a few weeks, if not a few days,” Ambassador Nebenzia told the Security Council.

“There, however, is no proof confirming such a serious accusation whatsoever being put forward. However, it is not preventing people from whipping up hysteria to such an extent that an actual economic impact is already being felt by our Ukrainian neighbors.”

“Our Western colleagues are talking about the need for de-escalation. However, first and foremost, they themselves are whipping up tensions and rhetoric and provoking escalation,” Mr. Nebenzia said.

“This is despite the fact that we are constantly rejecting these allegations, and this is despite the fact that no threat of a planned invasion into Ukraine from the lips of any Russian politician or public figure over all of this period — no such threat has been made. Rather, at all levels, we’ve been categorically rejecting such plans.” (See complete session video at the bottom of this article.)

Nebenzia recited a long established Russian accusation that the 2014 ouster of a Ukraine president in order to install a US-friendly puppet caused “nationalists, radicals, Russophobes and pure Nazis, to take control” which created the hostilities  between Ukraine and Russia in 2022.

“If [America] hadn’t done this, then we to date would be living in a spirit of good neighborly relations and mutual cooperation. However, some in the West just don’t clearly like this positive scenario. What’s happening today is yet another attempt to drive a wedge between Russia and Ukraine.” 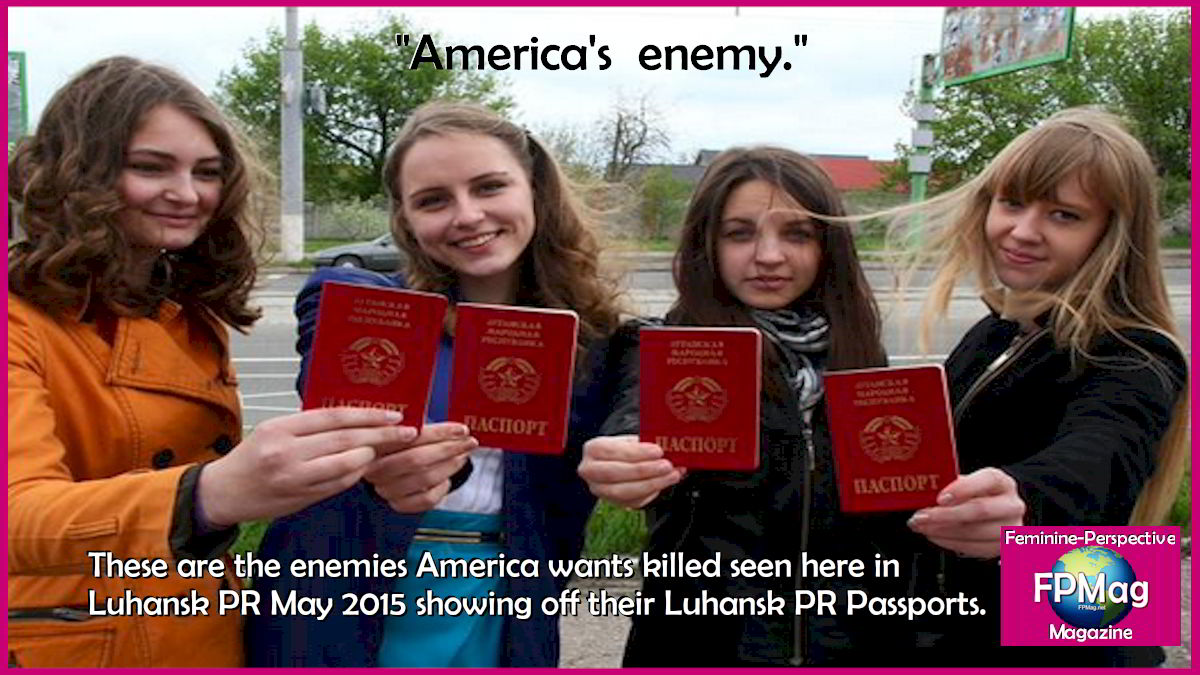 They call themselves citizens of Luhansk because they have their own Luhansk passports. File Photo Credit: Source supplied

If Donetsk PR and Luhansk PR rightfully belong to Ukraine, despite their eight years of nation statehood, Taiwan belongs to China by the same logic.

Ukraine lost the Oblasts of Donetsk and Luhansk to self declared statehood in 2014 following the American instigated Maidan revolution at the end of the Euromaidan protests, when a series of events led to the ousting of elected president Viktor Yanukovych, and the overthrow of the Ukrainian government in favour of a pro-USA government.

The two republics broke away from Ukraine, exercising their right of self determination. They have existed as independent countries for eight years, constantly under armed attack by Americans and Ukrainians.

Taiwan, in the eyes of Chiang Kai-shek, was his seat of government in 1949. He claimed to rule all of mainland China from Taipei.

Beijing has never seen things that way and continues to rule China from the mainland, completely disengaged from Taiwan and Taiwan’s own governed islands. Now China wants Taiwan back. Will it use the Ukraine example of American behaviour to thwart arguments against aggressive action?

In 1949, all of China was failing in civil war and revolution. Taiwan left.

In 2014, Ukraine was failing in civil war and revolution. Donetsk & Luhansk left.

Donetsk and Luhansk left of their own free will too. It was an unforeseen outcome from America’s meddling in Ukraine. The only encouragement from the outside was America which was stirring up the revolution in Ukraine.

Ukraine President Victor Yanukovych had been duly elected in 25 February balloting in 2010, an election scrutinized by international observers who considered the election reasonably free and fair,  Yanukovych ought to have been able to serve out his lawful term as president, which would  have ended in 2016. But the Obama administration had him ousted in 2014 in a resolution the US initiated. To return the country from the Chaos America brought, Yanukovych had actually been charged with asking Vladimir Putin to send Russian troops to invade Ukraine and return him to his elected seat of government. The evidence in that matter proves beyond a doubt that Yanukovych was unseated by America, not Ukraine or Russia. Russian sources released a transcript to the BBC of American diplomats who had been party to the coup plot.

“The extent of the Obama administration’s meddling in Ukraine’s politics was breathtaking,” writes Ted Galen Carpenter in the CATO Institute’s “America’s Ukraine Hypocrisy” 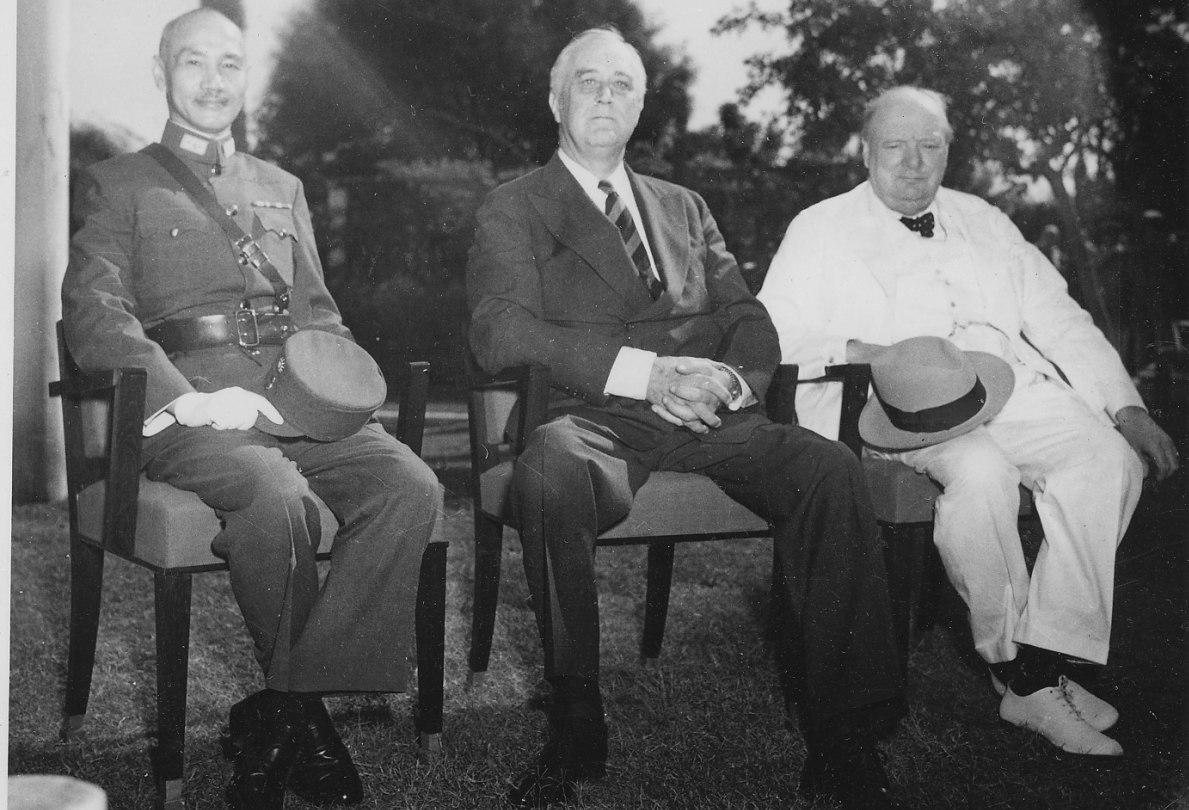 If Donetsk PR and Luhansk PR which broke from Ukraine in 2014, now as the USA claims, belong to Ukraine; and both Americans and Ukrainians continue to attack the people’s republics of Donetsk and Luhansk, trying to defeat their militaries, then by the same logic, Taiwan, which broke away from China in 1949 under Chiang Kai Scheck, rightfully belongs to China then China would be within its rights to invade Taiwan and take back control of Taiwan. Photo: Chiang Kai Scheck with Franklin D. Roosevelt and Winston Churchill in Cairo, Egypt, November 1943. Photo Courtesy U.S. National Archives and Records Administration. Photo is cropped. Cropping/Enhancement: Rosa Yamamoto FPMag

The military of the Donetsk People’s Republic during independence celebrations in May 2018 A referendum was held on 11 May 2014 and the organisers claimed that 89% voted in favor of self-rule, with 10% against, on a turnout of nearly 75%. The results of the referendums were not officially recognised by any government, including those of Ukraine, the United States, the European Union, and Russia.
Photo Credit:  Andrew Butko, CC BY-SA 3.0. Art/Cropping/Enhancement: Rosa Yamamoto FPMag