Donetsk, Luhansk Republics are now recognized as nations by Russia

Over 70,000 women, children and elderly citizens from Luhansk PR and Donetsk PR have been evacuated and more are on their way.

Civilians are being taken from Donetsk PR and Luhansk PR by bus, car and train to the Rostov region of Russia, which has been decklared to be in a state of emergency.

An estimated 60,000 Ukraine troops plus an unknown number of American mercenaries—which troops have been present for a long time—and some 400 tanks, all attack the Donbass region. People in the region report sporadic attacks followed by incessant artillery then another lull.

This is happening at a time when Volodymyr Zelenskyy, the president of Ukraine has said that he expects Ukraine will resume building nuclear weapons. At the break up of the Soviet Union, Ukraine had a significant nuclear weapons manufacturing capability.

In sharing his decision, President Putin talked about the history of Ukraine.

Late on Monday, Vladimir Putin, after being emphatically urged by the Russian Parliament and the Russian Federation Security Council, to recognize the Donetsk People’s Republic and the Luhansk People’s  Republic, said, “Yes”. 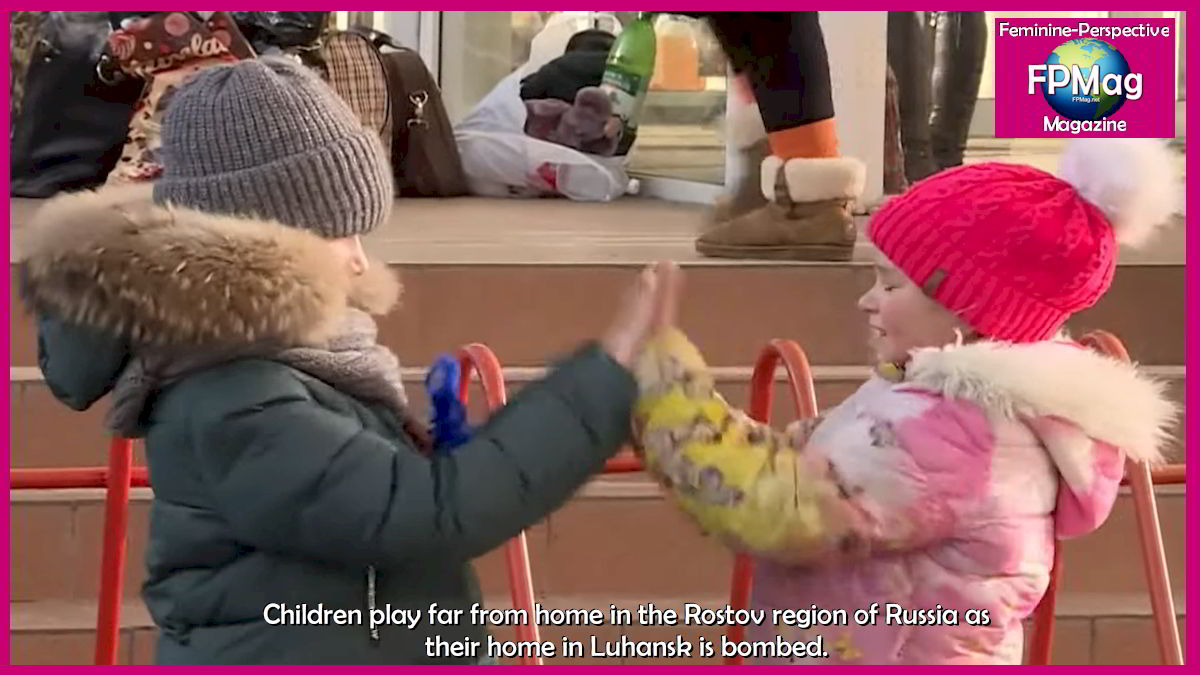 Children play far from home in the Rostov region of Russia as
their home in Luhansk is bombed. Photo Courtesy The RINJ Foundation. Art/Cropping/Enhancement: Rosa Yamamoto FPMag

While considering his decision, President Putin had telephone conversations with President of France Emmanuel Macron and Federal Chancellor of Germany Olaf Scholz.

President Putin informed about the results of the expanded meeting of the Security Council of the Russian Federation, which considered the current situation around Donbass in the context of the State Duma resolution on the recognition of the Donetsk and Lugansk people’s republics. Today, the leadership of the DPR and LPR received appeals to recognize their sovereignty in connection with the military aggression of the Ukrainian authorities, massive shelling of the territory of Donbass, as a result of which the civilian population suffers, according to the Kremlin in a statement.

Taking into account all this, the President of Russia said that in the near future he intends to sign a corresponding executive order.

The President of France and the Federal Chancellor of Germany expressed disappointment with this development. At the same time, they indicated their readiness to continue contacts, according to the Kremlin spokesperson.

While speaking to the security council members, earlier, at times individually, Vladimir Putin said, “Threats to Russia’s security will increase significantly in the event of Ukraine’s admission to NATO,” Russian President Vladimir Putin said on Monday.

“If Russia faces such a threat as Ukraine’s admission to the North Atlantic Alliance, to NATO, then the threats to our country will increase many times,” President Putin said and drew attention to Article 5 of the North Atlantic Treaty “from which it is clear that all the countries of the alliance must fight on the side of one of their members if one Ally is considered as under attack.” 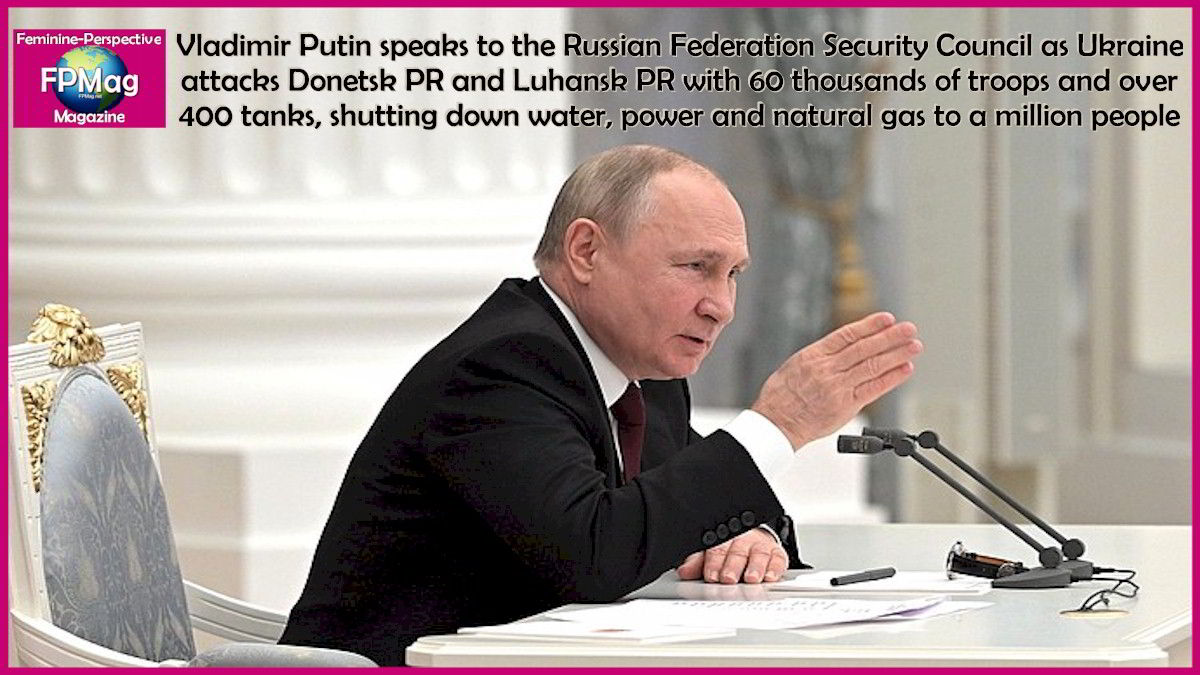 We have gathered with you to discuss the situation that is developing today in Donbass.

In a nutshell, I would like to remind you of what was happening there in the first place, how the situation developed, although you already know all this very well, and nevertheless so that there is a general picture that would help us make the relevant decisions.

So, after the coup d’état in Ukraine in 2014, part of the population of this country did not accept this coup. Let me remind you that it was unconstitutional and bloody, because many innocent people died during these events. This is indeed an armed coup – no one disputes this.

People have declared that they are forming two independent republics – the Donetsk People’s Republic and the Lugansk People’s Republic. From that moment on, the confrontation between the Kiev authorities and people living in this territory began.

In this regard, I would like to draw your attention to the fact that Russia initially did everything to resolve all the contradictions that have arisen by peaceful means and peaceful means. Nevertheless, the Kiev authorities have twice carried out military punitive operations in these territories, and, apparently, we are witnessing an aggravation of the situation for the third time.

All these years – I want to emphasise this – all these years the people who live in these territories have been mocked. Constant shelling, blockade. As you know, people living in areas close to the so-called front line were forced to move to basements – they live there with their children.

During the negotiation process, a peace settlement plan emerged, which is called the Minsk Package of Measures, because, as you remember, we met in the city of Minsk. But the whole course of subsequent events shows that the current Kiev authorities are not going to fulfill it. Moreover, they have repeatedly stated this publicly at the highest state level, at the level of the Minister of Foreign Affairs, at the level of Secretary of the Security Council. In general, it is clear for everyone: nothing is really going to be done on this Minsk Package of Measures.

Nevertheless, Russia has made and is still making efforts to resolve all the difficult moments and tragic moments of the development of events peacefully, but today we have what we have.

At the same time, I would like to note that these are different issues, but they are nevertheless very closely related to the global problems of ensuring security in the world in general and on the European continent in particular, because the use of Ukraine as an instrument of confrontation with our country, with Russia, is, of course, a serious, very big threat to us.

That is why in recent months, at the end of last year, we have intensified our work with our main partners in Washington and NATO in order to finally agree on these security measures and ensure the calm, prosperous development of the country in peaceful conditions. For us, this is the number one task, this is a priority for our country: not confrontation, but ensuring security and conditions for development.

But of course, we must understand the realities in which we live. And, as I have repeatedly said, if Russia faces such a threat as the admission of Ukraine to the North Atlantic Alliance, to NATO, the threats to our country will increase many times over. Because there is Article 5 of the treaty on the creation of NATO , from which it is clear that all the countries of the alliance must fight on the side of one of their members if he is subjected to any aggression. But since no one recognizes the will of the Crimeans and Sevastopol residents, and Ukraine insists that this is its territory, we have a real threat that they will begin to win back this, as they believe, their territory by military means, and they talk about it in their documents, write, this is obvious, and then the entire North Atlantic bloc will be obliged to join these events.

We are told, and you know this, that some NATO countries are against Ukraine becoming a member of the alliance, nevertheless, despite the fact that they are against it, in 2008 in Bucharest they signed a memorandum that opens the door to NATO for Ukraine and Georgia. To my question, why did you do this, there is no answer. Under pressure from the United States, that’s the answer. But if they took one step under pressure from the United States, where are the guarantees that they won’t take a second step under pressure? There are no such guarantees.

There are no such guarantees at all, because the United States easily refuses any agreements, any documents that it signs. Nevertheless, at least something should be put on paper and recorded as an international legal act. To date, we cannot agree on this either.

Therefore, I propose the following procedure for our work: first, I would like to give the floor to Sergei Lavrov, who works in the field of attempts to reach an agreement with Washington and Brussels, with NATO on security guarantees, and then I will ask Dmitry Kozak to make a report on his assessments of what is happening on the negotiation track on the implementation of the Minsk agreements, then I will give the floor to each of you. But in the end, we must decide what we will do next and how we should act, based on the current situation and based on our assessments of its development.

What followed were each member of the security council and one after another emphatically and sometimes emotionally urging the recognition and support of the two Republics as sovereign nations.