“It is truly great that the Ottawa Police Service is making peace with the right wing lunatic racist fringe invading Ottawa, I guess, to avoid a riot,” says Kathy, a RINJ Women member who lives in the Vanier suburb of Ottawa.

“But I remember trying that with the extremists who came into Mosul, Iraq in August 2014 with their trucks and hard talk. That did not work out either. The congeniality lasted a day or two,” says Katie Alsop, a founding director of the global women’s rights group.

“When  at least some Freedom Convoy protestors in Ottawa sees an Ambulance, they throw rocks,”  says Stephanie from Glebe along the Rideau. “The EMS workers and the nurses did not cause COVID-19, but they are being blamed by this mob,” she added.

“When many protestors notice a nurse, trying to get to work, who wears her scrubs under her coat, showing below the knee, they yell about masks and other issues using profanities and generally harass the woman,” says Marilyn who lives in Rideau, and in fact is a nurse herself. She said that she has received drive-by slurs and catcalls even just running out to help a patient to a waiting ride.

Respect, love, honour and dignity are due the Tomb of the Unknown Soldier, say readers in Ottawa. “The Tomb of the Unknown Soldier and National War Memorial are sacred sites for our country. I urge all Canadians to treat them with solemnity, out of respect for those who have fought and died for Canada,” Defence Minister Anita Anand tweeted. “The behaviour we’re seeing today is beyond reprehensible.”
File Photo, Confederation Square, Ottawa, Canada. Photo Credit: Melissa Hemingway.

Canadian Prime Minister Justin Trudeau said on Monday, “I want to be very clear: We are not intimidated by those who hurl insults and abuse at small-business workers and steal food from the homeless,” Trudeau said. “We won’t give in to those who fly racist flags. We won’t cave to those who engage in vandalism or dishonor the memory of our veterans.”

FPMag asked Marylin what she thought of those words.

“Heh heh. I cheered, woke the baby up. My husband came into the living room and I flipped the channels and got the same segment from CTV. My husband was cheering too, but more like it was his favourite footballer getting a goal, and he is not even a Liberal,” she laughed.

Video: CTV News Crew which has delivered “both-sides-of-the-story” reportage according to FPMag journos and their editorial board, is under merciless attack in this video, prevented from doing their job

Hundreds of thousands of women in Ottawa are trying to fetch groceries to feed the kids; feed themselves; get the kids to school (but mostly there are no school busses); get to their own jobs, those that have them; get the kids to their dental or doctor appointments; buy the birthday cake; or save their family business from another financial hit, shut down by clogged streets  for five days or more now because of the massive disturbance of the Ottawa peace by protestors with noisy transport trucks, and drunks all night long, women are saying.

A million people live in Ottawa and most of them are vaccinated according to Health Canada statistics.

Several mothers FPMag interviewed, members of RINJ Women who live in Canada, were “angry at the entire drama”.

“Sure I am angry with the truckers who if they are not required to get vaccinated by the Canadians they are certainly required to get vaccinated by the USA authorities if they are crossing into the United States. This is plain stupidity. The government should have arrested them, taken their trucks away and cancelled their licenses. The noise is deafening and the kids are terrified,” says Marla who lives in the city in a condominium with her children. They are barricaded inside their home, she says.

“When some Canadians decided to amass thousand ton [actually 15 ton to 40 ton]  machines in our home city like its a terrorist army, a line has been crossed and the rule of law needs to be applied,” said Marla, starting to get a little angry.

“What is happening in Ottawa is an unacceptable breach of the peace and the organizers need to be arrested and charged. I am furious. They have no right to attack the people of Ottawa. We didn’t do this COVID thing but we all got vaccinated. Why are these bullies so special?” she added.

Stephanie from Glebe, a suburb of Ottawa explained that her husband is in the Canadian Army; that she also had served in peacekeeping missions, but was now raising her children; that her dad and her grandad had served and both had active combat service in Canada’s military. Getting somewhat emotional, she said more than a few words. These are some of the words of this extraordinary Canadian veteran.

“I want to use the example of how Kevin Bacon portrayed Lt. Col. Michael Stroble, performing an escorted trip home for a KIA soldier,” she explained.  It’s a movie called Taking Chance. Phelps is his last name, a real soldier who was killed in Iraq as the convoy he was escorting came under heavy fire. I thank Kevin Bacon for the portrayal of our code of honour in respecting the fallen.”

“For the MIA and the unknown soldiers, there is only a monument because we never get them to their home, the way it should and did happen normally, as with the case of Chance Phelps and many soldiers with great honour, dignity and respect, for our people like Chance Russell Phelps.

“We never got them home, the MIA and the unknown soldiers. So we gave them a monument and these [words of an angry soldier] invaders, desecrated that monument, they desecrated my dad’s friends and my grandad’s buddies and all our fallen loved ones. I am even disgusted that they drive down the Canadian Highway of Heroes, the Macdonald–Cartier Freeway,” she said, the tears beginning to roll down her cheeks.

“I want these truckers to lose their licenses plus their right to be on our roads, and I want the Royal Canadian Armoured Corps, even if they must come from Gagetown, to bring armoured recovery vehicles and haul those crappy trucks away so we can have our home back,” she said.

“I want justice,” she added. 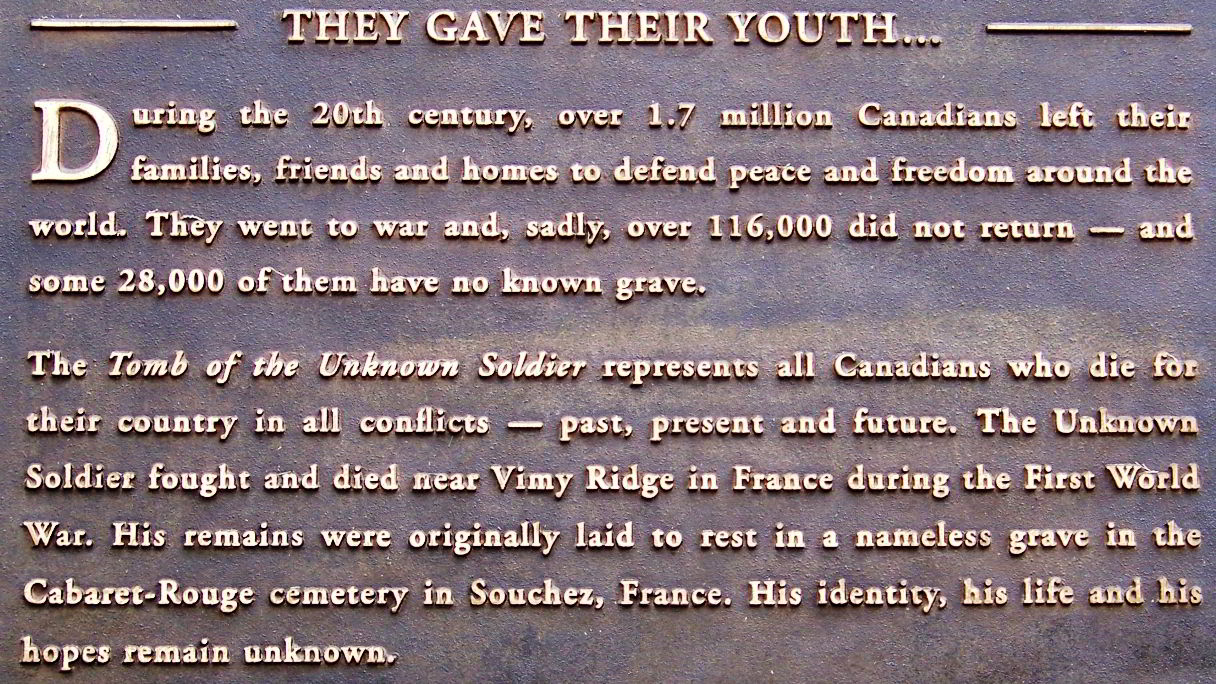 Tomb of the Unknown Soldier, Confederation Square; Ottawa, Ontario Canada deserves dignity, honour and respect, say FPMag readers in Ottawa. “I am sickened to see protesters dance on the Tomb of the Unknown Soldier and desecrate the National War Memorial. Generations of Canadians have fought and died for our rights, including free speech, but not this. Those involved should hang their heads in shame,” said Gen. Wayne Eyre, Canada’s Chief Of The Defence Staff (CDS). Photo Credit: Melissa Hemingway

Schools in Ottawa are Open but School Bus schedules were mostly cancelled Tuesday. The schedule is here.