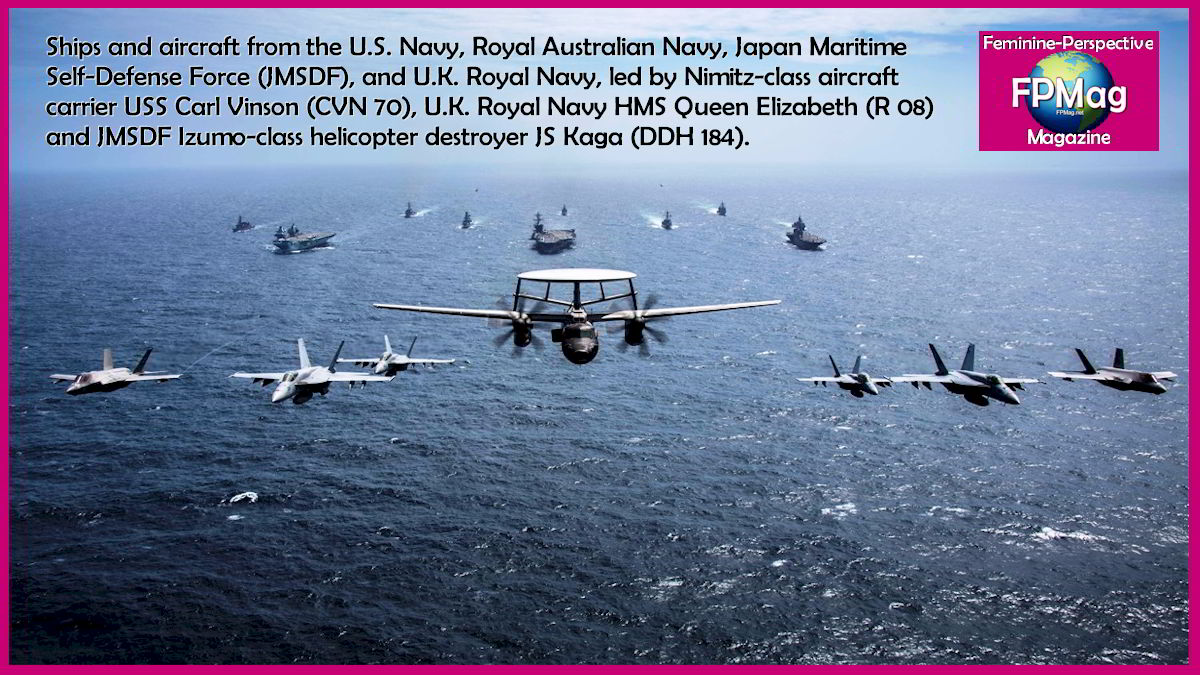 In 1992, then Russian foreign minister, “Andrei Kozyrev, warned that if the West continued to attack vital Russian interests and ignore Russian protests, there would one day be a dangerous backlash”. (Citing Anatol Lieven a senior fellow of the Quincy Institute for Responsible Statecraft in Time Magazine )

Joe Biden’s frenzied claims that Russia is about to start a war these past four months may well be emerged from a guilty conscience, but for sure it is a desperate bid to save his presidency with a scurrilous endangering human life all around the world.

At the start of his week, Russia, Belarus, Cuba, Venezuela, Nicaragua, South Ossetia, and Syria officially recognized sovereignty of the 2014-self-declared independent states of Donetsk PR and Luhansk PR. They are recognized by each other. More nations are saying they will follow.

For months, the White House has been telling Americans to get out of Ukraine causing a national scare in that country. Now in concert with the United States, Ukraine is telling its citizens to leave Russia as over 100,000 refugees flee from Donetsk and Luhansk Republics into Russia according to RINJ Foundation humanitarian volunteers helping the elderly and children with the structuring of their evacuation.

According to the International Committee of the Red Cross, “In the last two days, at least two major pumping stations in the Donetsk region were rendered inoperable by the hostilities. The two stations, the 1st Lift Pumping Station and Karlivska Filtration Station, serve more than 1 million people on either side of the line of contact with potable water, including hospitals and other crucial services.

“What has happened on the Ukraine issue has much to do with the long delay in the effective implementation of the Minsk II agreement, China’s foreign affairs ministry said around 9:00pm on 22 February.

Essentially, after eight years of independence, acting as sovereign states in all that time, while being shelled by Americans and Ukrainians, at least seven countries have finally said, “OK, they are states”.

This followed 8 years of apparent pussyfooting around on the Minsk II Accord of 2015 in which the parties had agreed to resolve the complaints of the two Republics and re-integrate them back into the Ukraine.  Based on persistent reports of Americans and Ukrainians shelling the separated regions, Minsk II was never implemented. The US-controlled Kiev government didn’t follow through on two separate agreements to reintegrate all of the Donbass region. Instead they passed laws to suppress the use of the Russian language. 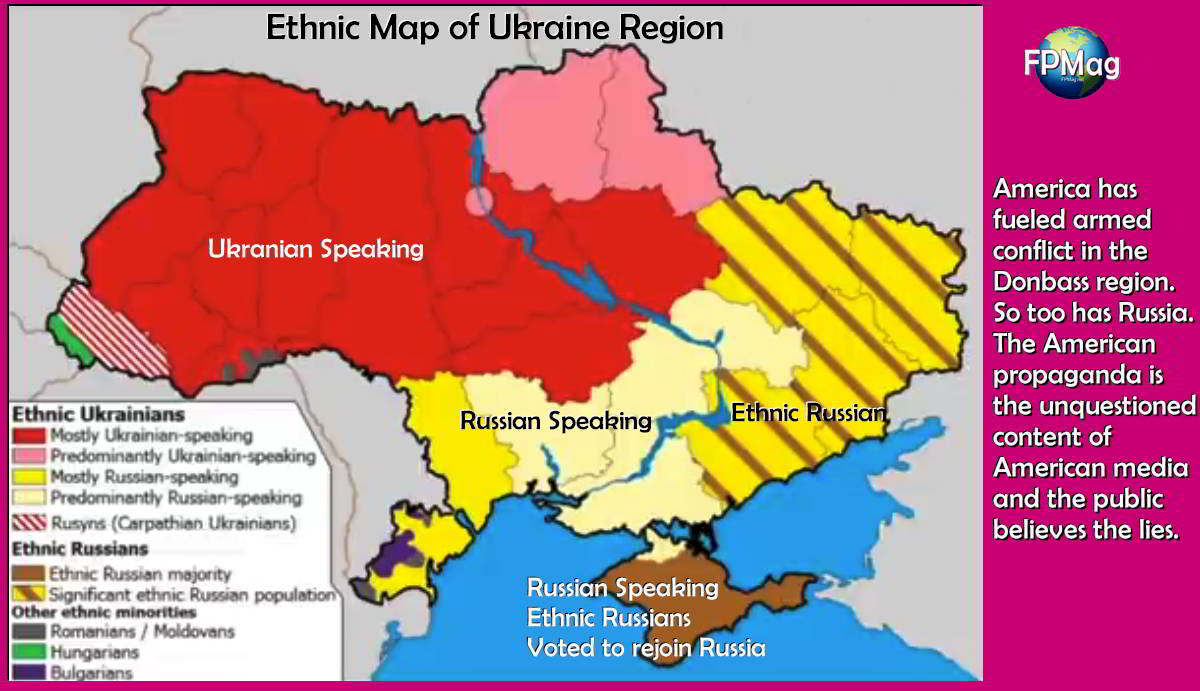 Latest Ukraine crisis of many, managed in the USA by Joe Biden as former VP and now as POTUS, has arisen from a failure to implement the Minsk Agreement. American propaganda is the unquestioned content of American media and the public believes the lies. Photo Credit: John J. Mearsheimer University of Chicago. Art/Cropping/Enhancement: Rosa Yamamoto FPMag

Why is the Ukraine Crisis the West’s fault? An historical perspective by Professor John Mearsheimer.

Following the decision of ethnic Russians in Crimea to separate from Ukraine and rejoin the Russian Federation, John J. Mearsheimer, the R. Wendell Harrison Distinguished Service Professor in Political Science and Co-director of the Program on International Security Policy at the University of Chicago, assesses the causes of the present Ukraine crisis, the best way to end it, and its consequences for all of the main actors. “Why is the Ukraine Crisis the West’s fault? An historical perspective by Professor John Mearsheimer.”

“Whatever one believes about the prospect of such a confrontation, the reality is that the current situation is extremely dangerous,” said Rosemary DiCarlo, Under-Secretary-General for Political and Peacebuilding Affairs about the current crisis in Ukraine.

One impeachment of a US President and one to come, says GOP

Interference in Ukraine by America has already caused the impeachment of one US President and GOP sources to FPMag in large numbers, are saying another President will be impeached for his malfeasance in Ukraine after the November 2022 mid-term elections when the GOP takes over both the Congress and the Senate. GOP Senators Ted Cruz said this week that he is “very optimistic” about 2022. He “put the odds of the Republicans winning the House at 90/10,” but, “may even be higher than that.”

(The U.S. sent more than $400 million in military aid to Ukraine last year and has invested about $2.5 billion in assistance to the country since 2014. ) 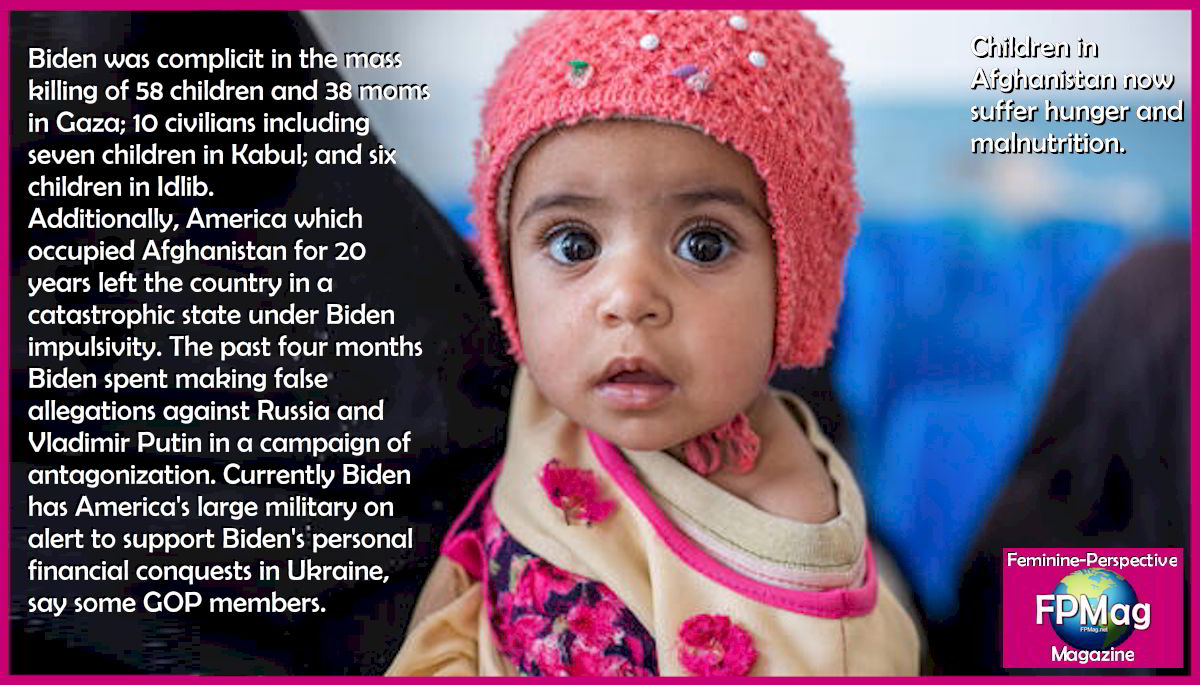 In less than a year, Biden crimes are reprehensible.
Biden was complicit in the mass killing of 58 children and 38 moms in Gaza; opposed the International Criminal Court investigating those crimes; mass murdered 10 civilians including seven children in Kabul; and six children in Idlib.
Additionally, America which occupied Afghanistan for 20 years left the country in a catastrophic state under Biden impulsivity. The past four months Biden spent making false allegations against Russia and Vladimir Putin in a campaign of antagonization. Currently Biden has America’s large military on alert to support Biden’s personal financial conquests in Ukraine, say some GOP members. UNICEF Photograph, Afghanistan 12/2021. Photo is cropped. Art/Cropping/Enhancement: Rosa Yamamoto FPMag

Biden’s crimes against humanity are becoming catastrophic in Afghanistan, Syria, Turkey, France, Ukraine and now across the world.

“It’s bad enough that the Americans have occupied the Asian Seas so extensively with war machinery that it recently lost an F-35 fighter/bomber with all its weapons in the sea, and before that smashed up a nuclear submarine, USS Connecticut (SSN-22) on one of the reefs while recklessly speeding through an uncharted region. The USS Connecticut will be out of service for years. It was a miracle there was not a nuclear disaster impacting the millions of Asians living around the sea,” explained RINJ Women‘s Indo-Pacific director, Sharon Santiago. 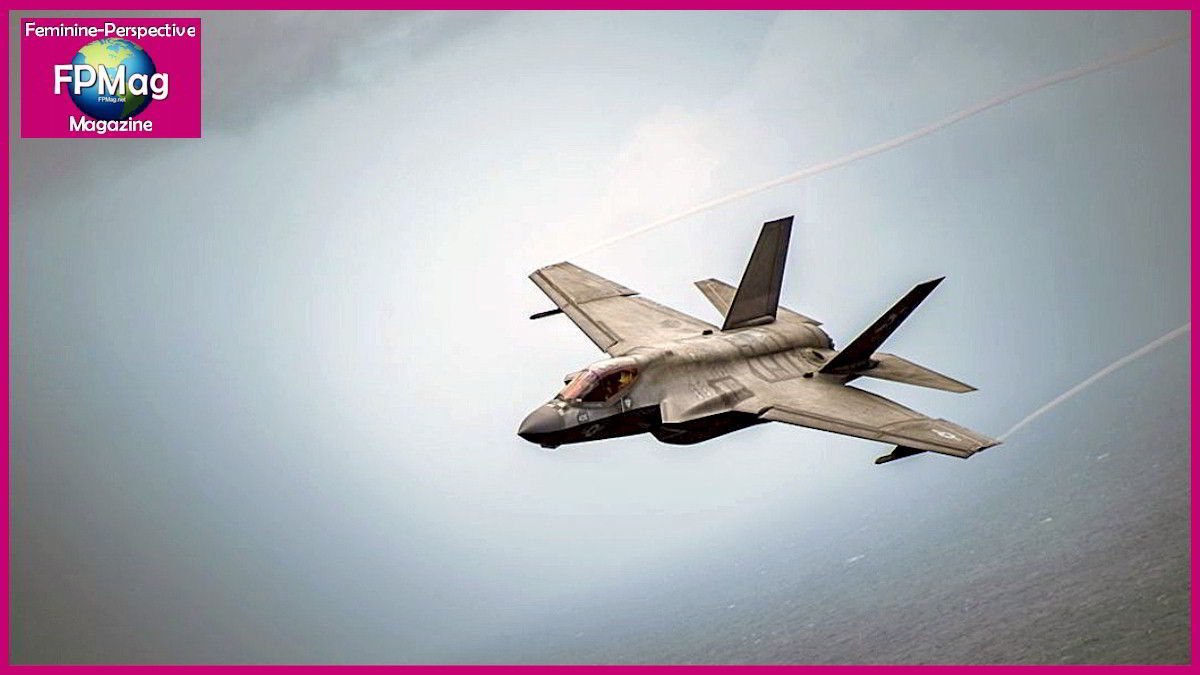 US Navy and allies protected by F-35C as they prepare for war against Russia
An F-35C Lightning II, assigned to the “Argonauts” of Strike Fighter Squadron (VFA) 147, flies over the Bay of Bengal. U.S. Navy photo by Mass Communication Specialist 2nd Class Haydn N. Smith
Art/Cropping/Enhancement: Rosa Yamamoto FPMag

“Biden needs better minders who can save the world from his screwups,” she added.

Joseph Biden needs better minders. He says that Russia declared two new nations on its neighbours territory. That has not happened.

“Who in the Lord’s name does Putin think gives him the right to declare new so-called countries on territory [sic] that belonged to his neighbors?  This is a flagrant violation of international law, and it demands a firm response from the international community,” said Joseph Biden on 22 February at 2:22 local time (02/22/22/02:22).

The current crisis in Ukraine which has been managed in the United States by Joseph Biden as former vice president and recently as president, has arisen from a failure to implement the Minsk Agreement plan for peaceful reintegration of the Donbass regions back into Ukraine following their declaration of independence in early 2014 according to Russian Foreign Minister Lavrov and numerous other official commenters.

“We thoroughly explained the situation around Kiev’s reluctance to implement the Minsk Agreements as the Ukrainian regime is not only unwilling to fulfill them but openly rejects them,” Lavrov pointed out on 10 February 2022.

“What has happened on the Ukraine issue has much to do with the long delay in the effective implementation of the Minsk II agreement, China’s foreign affairs ministry said around 9:00pm on 22 February 2022.

After eight years of reunification failure under Minsk II, Moscow officially recognized the Lugansk PR and Donetsk PR on Monday while explaining  Kiev’s refusal to fulfil its side of the obligations set out in Minsk II or seek a negotiated alternative in the past eight years..

China has spoken out on the solution of the Ukraine crisis and maintains that “disputes should be peacefully resolved in accordance with the principles of the UN Charter. We call on relevant parties to exercise restraint, resolve differences through negotiation and avoid further escalation of tension.”

But the United States has cancelled a high-level meeting this week of the American and Russian Foreign Ministers saying there is no point in continuing negotiations because Russia has recognized the states of Luhansk PR and Donetsk PR.

Despite only peacekeeping Russian troops entering the region, Russia has taken seriously its Monday agreement to protect the ethnic Russians under a new siege in the Donbass region.

The outcome is that Russia has enabled the Russian people to host nearly a million endangered persons in the Donbass region and to permit the pending help of sending Peacekeepers Into the Region.

People of the Russian Federation have provided food, money and safe-haven to over 100,000 ethnic Russians from the regions of the Donetsk PR and the Luhansk PR.

The Chinese Foreign Minister’s spokesperson Wang Yi answered a New York Times reporter’s question about a comparison of the Donbass region to Taiwan.

“Since you mentioned the Taiwan question, I would like to stress that there is but one China, and Taiwan is an inalienable part of China’s territory. This is an indisputable historical and legal fact. The one-China principle is a universally-recognized norm governing international relations. The Chinese people have the strong resolve, determination and capability to safeguard national sovereignty and territorial integrity.”

The Red Cross is warning of a pending humanitarian catastrophe in the Donbass region.

“We are very concerned about the developments in eastern Ukraine over the past few days. Civilian infrastructure providing essential services, and civilian personnel who operate, maintain and repair that infrastructure are protected under International Humanitarian Law,” says Florence Gillette, the ICRC’s head of delegation in Ukraine.

“We remind all sides that, in the conduct of military operations, constant care must be taken to spare the civilian population, civilians, and civilian objects. The ICRC calls on all the sides to spare infrastructure that is essential for the survival of the population and to respect principles of distinction, proportionality and precaution,” she said.