Ukraine claims to have killed 5,300 Russians and adds that nearly 352 Ukrainians have died, according to the Ukraine Health Department. Russia officially denies these numbers. Today the UN said 102 civilians, including seven children, were killed in Ukraine. Seven is the number of Afghan children killed by the USA Biden administration, one of the participants in the current war,  in Kabul, Afghanistan, with a drone attack on 29 August 2021. Six Syrian children were killed in Idlib province of Syria at the start of this month, by the Biden Administration.

There has been no reportage on the latter and the families of the seven children in Kabul will get some money from the US if they stop talking to media, they say. They continue to wait.

“This isn’t Iraq or Afghanistan. This is a relatively civilized, relatively European city,” CBS foreign correspondent Charlie D’Agata said about the 102 tragic civilian deaths in Ukraine which Russia says it has been trying to avoid. Europe is a white supremacist union?

A second truce/ceasefire meeting of Ukraine and Russia is planned for Tuesday or Wednesday after five hours of talks that covered many common positions of consensus and agreed to continue the talks, say official releases.

Russia’s Ambassador Vasily Nebenzya again said today at a General Session of the United Nations that it “does not intend to occupy Ukraine”.

Massive Shipments of American Weapons bought by the EU and Canada flood into Ukraine as the government pours these weapons into the streets for citizens to have. Those now-combatants continue to use the weapons for gang warfare; to rob stores; and to rape women according to health care workers in the city.

On 24 February 2022, Russia invaded Ukraine in what Turkey’s president Recep Tayyip Erdogan describes as an unacceptable act to support ethnic Russians in the country who formed two distinct functional Republics in the Donbass region which have been shelled for eight years by Americans and Ukrainians according to local humanitarian medical workers in the region who FPMag has been talking to during the entire COVID-19 pandemic.

How many died when Ukraine turned citizens into “armed combatants, no longer protected by the rules of war”?

“Since before 24 February, The United States, and the European Union have been pouring billions of dollars worth of weapons into Ukraine to allegedly find peace, but more like adding fuel to a fire by turning citizens into armed combatants no longer protected by the rules of war, ” said Simon Baldock, an Israeli security analyst who spent a week in the Donbass region and in Ukraine to learn firsthand the local reaction to events.

Listen to what women are saying. Tulsi Gabbard says Ukraine should be a neutral country.

Much has been said about the mental capacity of the two leaders embroiled in this war, Joseph Biden in the USA White House and Vladimir Putin in the Kremlin.

Putin said, technically, Ukraine doesn’t really exist in a lengthy lecture on Ukraine history which foretold what we are seeing unfold in the country. This thesis is highly contested but does have some merit say some of the debaters.

“This process began practically immediately after the 1917 revolution, and moreover Lenin and his associates did it in the sloppiest way in relation to Russia — by dividing, tearing from her pieces of her own historical territory,” said Mr. Putin a week ago.

The standoff ran for months over putting NATO troops in Ukraine on Russia’s border.

Tulsi Gabbard, an American politician and Army Reserve officer who served as the U.S. representative for Hawaii’s 2nd congressional district from 2013 to 2021 very succinctly said:

“Dear Presidents Putin, Zelensky, and Biden. It’s time to put geopolitics aside and embrace the spirit of aloha, respect and love, for the Ukrainian people by coming to an agreement that Ukraine will be a neutral country—i.e. no military alliance with NATO or Russia.

“It came down to a standoff  before Putin took the decision to begin a ‘military operation’ after failing to have its legitimate security concerns responded to.

The unelected head of NATO, Jens Stoltenberg, who on behalf of the White House is directing this war,  said, “So if Kremlin’s aim is to have less NATO on Russia’s borders, it will only get more NATO.”

Once Putin is gone and Russia has died, what purpose does NATO serve?

“The famine that could be the outcome of blockading wheat and other food grains from Russia might exacerbate the famine that is already spreading in some undeveloped nations, because of the pandemic” said Mr. Baldock.

“We now await for hopefully good results from coming talks between the World versus Russia, diplomats,” Mr. Baldock added. 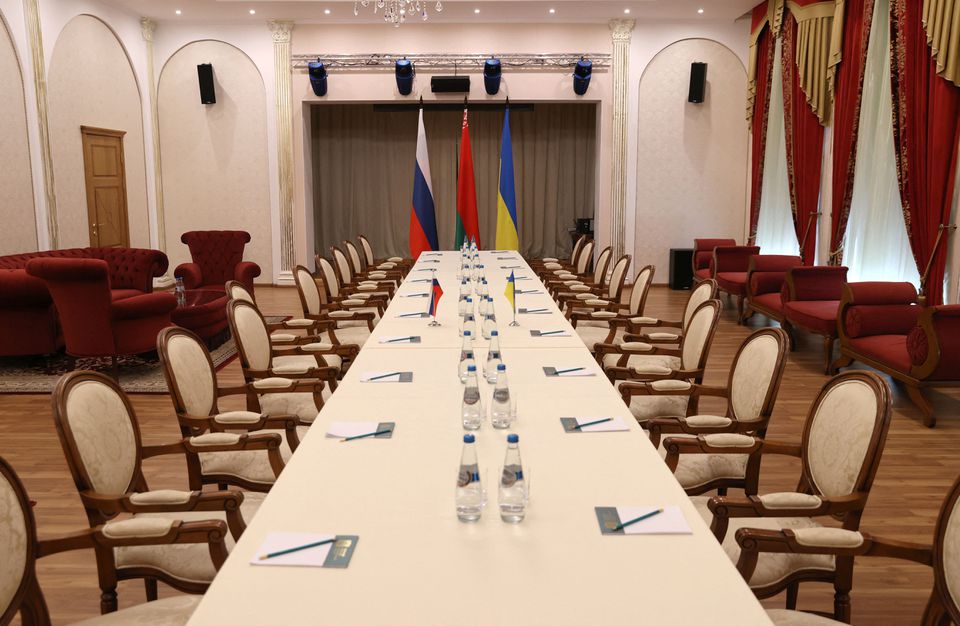 Handout from Talks in Belarus