The true Zaporizhzhia story as told by local apolitical officials

Ukrainian President Volodymyr Zelenskyy insisted after talks on Thursday with visiting UN Secretary-General Antonio Guterres who has taken the side of the United States in the US proxy war against Russia in Ukraine, that the UN organization must ensure the security of the Zaporizhzhia nuclear power plant occupied by Russian forces for many months.

By Melissa Hemingway in Ukraine and Micheal John in Toronto

Ukraine has accused Russian troops, which occupy the entire region, of firing artillery shells at themselves in the 105 hectare Zaporizhzhia site putting the six nuclear reactor units at risk.

Russia claims that not its own soldiers but Ukraine soldiers have been firing artillery shells and rockets at the Russian troops surrounding the facility.

Local witnesses claim the latter is true and the Russians have not been targeting themselves at the Nuclear Power Plant.

Antonio Guterres, meeting Zelenskyy far from the front lines, in Lviv, had, on Thursday, discussed grain shipments and the alleged crisis at the Zaporizhzhya nuclear power facility which has been occupied by Russia since 28 February 2022.

According to his actions and speeches, Mr. Guterres has taken the side of the USA in the US proxy war against Russia in Ukraine, since before the Russian military operation began.

Russia plans to ensure power for Donetsk region including Mariupol and Luhansk.

Russia has controlled the Energodar power plant, its local officials claim, to prevent Ukraine from cutting power to the Donetsk People’s Republic including Mariupol, and the Luhansk People’s Republic. “It’s a natural order of events in our military operation,” said a Donetsk official.

But recently, according to sources with the Donetsk PR government, Russia has decided, in concert with regional officials, to turn off the power from most of Ukraine which is not much since the units only provides 20% as one of four operating power units. Russia is focused on the reconstruction of Mariupol and other parts of the Donetsk region which with the rest of the occupied territory comprises over 20% of the former Ukraine.

Currently Russia controls more than 21% of Ukraine. Zaporizhzhya is one of the four operating NPPs in the country and generates up to 42 billion kWh of electricity,  according to its operator. Accounting for about 40% of the total electricity generated by all the Ukrainian NPPs and one-fifth (20%) of Ukraine’s annual electricity production, the Zaporizhzhya operation is in some units approaching its life expectancy.

Russia intends to keep the plant running for the occupied regions, say local officials but has also suggested shutting the plant down if the Ukrainian artillery attacks continue.

“Obviously Russian soldiers are not firing artillery rockets and shells at themselves as Ukraine’s propaganda machine and actor Volodymyr Oleksandrovych Zelenskyy have claimed,” notes a medical worker at the facility who does not wish to be identified for security obvious reasons.

Details on the Zaporizhzhya nuclear power plant (NPP) operated by EnergoAtom and overseen by the Russian Scientists who initially designed the Soviet reactors. 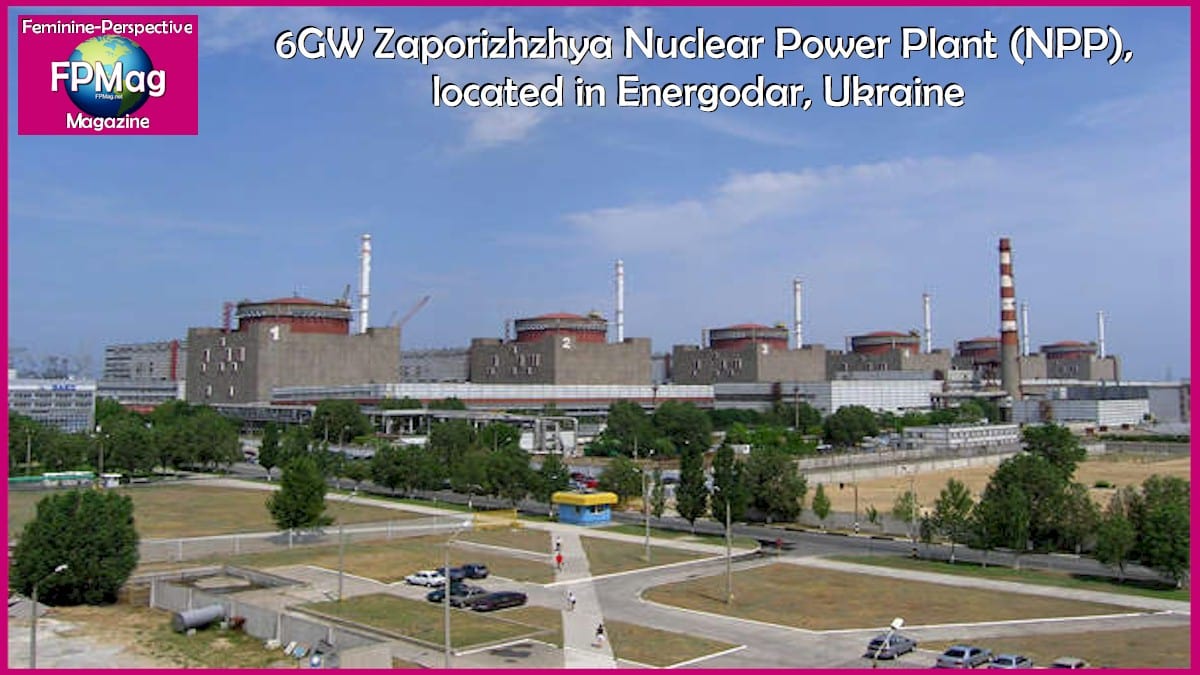 The Zaporizhzhya nuclear power plant (NPP) operated by Energoatom is situated on a 104.7 hectare site on the banks of the Kakhovka reservoir. The area, now controlled by Russia  was selected because of available infrastructure at the nearby Zaporozhe Thermal Power Plant, land unsuitable for agriculture and its distance from foreign territories.

This is not a site like Chernobyl and a nuclear disaster is extremely unlikely but Russia is providing access to atomic Energy Inspectors.

According to atomic energy experts, Zaporozhe is unlike Chernobyl which was a much older design.

While the outer enclosures of the reactors are heavy and resistant to even air attack,  spent fuel cooling pools outside the reactors have highly radioactive spent nuclear fuel stored under water. A direct bombardment on any of these could lead to a release of radioactive material into the atmosphere, as the fuel is relatively unprotected against strikes from the air.

Zaporozhe Energoatom officials claim the site is safe and that Zelenskyy is breeding hysteria for no good purpose.

Alexander Ostapovets, general director of the Zaporozhe plant in 2017 at the time of the modernization start, noted in a company statement that three of the units were then operating under extended licenses. He described the plant as “pioneering” in prolonging the operation of a V-320 reactor, and added that the restart of unit 3 meant half of the plant’s reactors were now in service beyond their original license period.

“We have crossed the halfway point and are only going to increase the pace, using this accumulated experience, because the extension will safely produce several tens of billions of kilowatt-hours of electricity, thereby ensuring the energy stability of the country,” said Alexander Ostapovets at the time of modernization.

Zaporozhye unit 5 received a licence from the State Nuclear Regulatory Inspectorate of Ukraine (SNRIU) on 5 January 2021 and the unit was reconnected to the grid on 15 January 2021 and celebrated on 29 January at a ceremony attended by Energoatom acting President Peter Kotin and the mayor of plant operator town Energodar Dmitry Orlov.

“The relaunch of the unit 5 of the Zaporozhye NPP was difficult,” said Kotin at the ceremony on 29 January. “There were objective reasons and, unfortunately, resistance from opponents. There was also the coronavirus. But we were able to overcome all obstacles and complete all the necessary measures.” 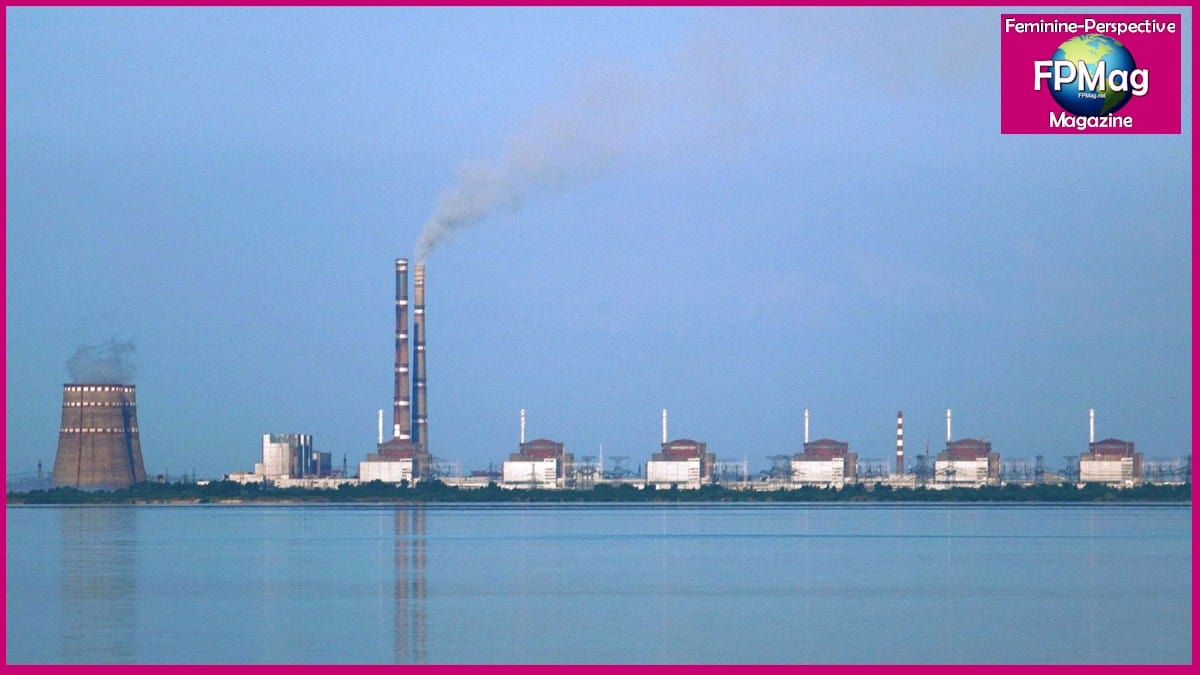 10 July 2009  File Photo. Enerhodar, about 50 km from Zaporozhye in Ukraine, viewed from across the Kakhovka Reservoir on the river Dnieper. Photo taken from the “Nikopol” shore. The nearer power station is Zaporizhzhia Nuclear Power Plant, the biggest nuclear power station in Europe, consisting of two cooling towers (one largely obscured by the other) at the left and 6 VVER reactor buildings. The large building between the cooling towers and the reactors, and the two tall smokestacks, are at the Zaporizhzhia thermal power station about 3 km beyond the nuclear plant. Photo credit: Raif1969/ License.