“End the war,” say RINJ Women humanitarian workers and the women and girls they support in Ukraine. “Unfettered Talks are needed,” they say, “as fears grow about Zaporizhzhya nuclear power plant.“

As Melissa Hemingway suggests from Ukraine, Doug Bandow of the American Conservative spelled it out exactly: ‘Both Russia and Ukraine have lied and will continue to lie in search of future advantage’.

Meanwhile a growing consensus in the embattled Donbass is “that this must end immediately”, says a local official. But the USA is now pouring additional mega billons worth of weapons into Ukraine as part of 24 August Independence Day celebrations to keep the war going, challenging Russia’s warning against further American participation in the war. 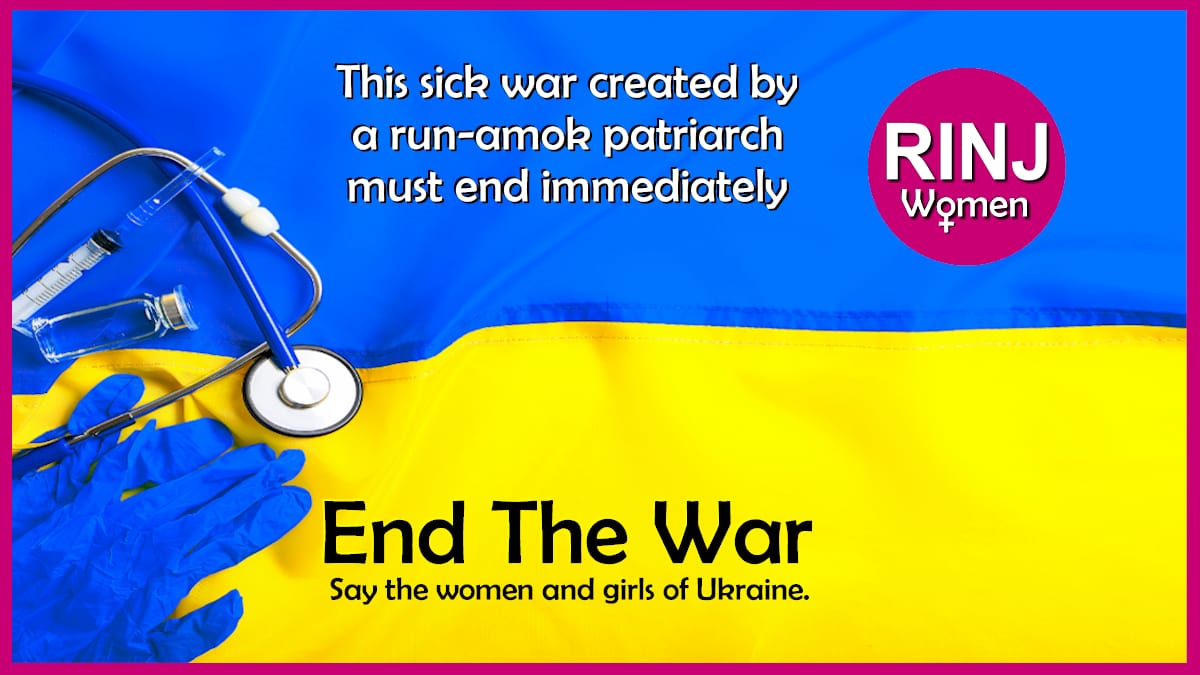 “Russians here are going to vote overwhelmingly—I know my constituents—in favour of living as Russians, because they are Russians, and the other’s, those who object, have left years ago,” says a town mayor in Luhansk PR region who does not want to be identified for fear of the risk of being targeted and even killed by AFU.

“The Ukrainian control of parts of Donbass is opposed by civilians. Ukrainian Armed Forces are even attacking foreign humanitarian workers claiming that, for example, in some cities of Donbass where Ukraine is retaliating against an August 2022  Amnesty International report, civilians are being forced to evacuate their homes. Soldiers, Mayors and civilian municipal workers trying to force reluctant people out of their homes claim absurdly that humanitarian workers are enemies for supplying foodstuffs, water, medical care, some medicines, and women’s shelters, for the local civilians,” says Dale Carter from Kiev. She is director of security for the RINJ Foundation.

“Crimes of this nature are war crimes without statutes of limitations as per UN Resolution 1820,” she added. “Once the survivor has given certified approval to proceed with a criminal prosecution and the inclusion of her testimony, a decision must be taken about, but usually against, revealing the person’s identity to the public. In the case of minor children as are too many of the cases in Donbass, privacy (secrecy) will be absolute and unequivocal.”

“Some of these men are just looking for women they have attacked and seek to silence,” says Alona Adamovich, a regional medical director of the global RINJ Foundation.

“Many times it is demanded of us to provide the location of Women’s Shelters or Rape Clinics. I have confirmed that RINJ will not do this anywhere in the world and that its first priority is the safety of the women and children to whom its women workers provide services,” she added.

According to official reports in Ukraine, the parliament has taken strident steps to prevent the violation of survivors’ rights to personal privacy and security.

“Ukrainian media outlets in May 2022 expressed concern and even outrage over the sensitive information about victims contained in reports by the official commission for Human Rights and its ‘Ombudsperson’ Liudmila Denisova. This related to explicit details on the survivors of sexual crimes committed by the Russian and Ukrainian male soldiers against women and girls during the war. Journalists had signed an open appeal to the ombudsperson to adjust communication in accordance with the ethics of dissemination of such sensitive information about the rape survivors who were subsequently endangered by their detailed information including whereabouts were reported. The Ukraine Parliament fired the offending officials which should indicate to officials in Donbass that they may not have access to rape survivors who do not wish to be interrogated by soldiers or other men and do not want to be exploited for propaganda purposes. All security violations of the person’s rights result in grave dangers, is our experience world-wide over a great many years,” explained Ms. Carter.

“The Ukrainian military firing NATO  artillery shells last week  (they turned out to be NATO standard caliber) at the center of Donetsk City, is hardly a denial of Amnesty International’s claim that Ukraine persistently commits war crimes against civilians,” said Lana, a humanitarian worker for The RINJ Foundation.

“Mayor Alexey Kulemzin, of Donetsk City, said in Russian that a direct hit on an apartment building in the Voroshilovsky district of Donetsk has caused considerable damage and injuries. I know this building and have picked up workers many times. The building is occupied by new doctors, interns, nurses, paramedics, clerical workers and other civilians. It is not a military target,” reported Lana, who has been a humanitarian worker for The RINJ Foundation since 2013.

Amnesty International Criticized the Ukrainian Military for endangering Civilians, Yes, but it condemned all sides for crimes against Civilians in a totally balanced report.

“In certain other locations in which Amnesty International concluded that Russia had committed war crimes, including in some areas of the city of Kharkiv, the organization did not find evidence of Ukrainian forces located in the civilian areas unlawfully targeted by the Russian military.

“We have documented a pattern of Ukrainian forces putting civilians at risk and violating the laws of war when they operate in populated areas,” said Agnès Callamard, Amnesty International’s Secretary General about a controversial Amnesty International report on war crimes Ukraine is alleged to have commit.

The USA which initially provoked and now controls the US proxy war in Ukraine has protested the Amnesty report through its officials in Kiev including Volodymyr Zelenskyy who is the USA-backed leader of Kiev.

Ai’s report said, “Amnesty International researchers witnessed Ukrainian forces using hospitals as de facto military bases in five locations. In two towns, dozens of soldiers were resting, milling about, and eating meals in hospitals. In another town, soldiers were firing from near the hospital.”

“Using civilians as human shields is not a unique situation as the Amnesty International report seems to indicate, it was standard Ukrainian and American operatizing procedure in Mariupol plus all across Donbass now and since summer 2014. I know this because I have been on hand here at home in Donbass working as a humanitarian medical worker, both as a Nurse and a Paramedical professional for that entire period,” explains Alona Adamovich, a director of the global RINJ Foundation.

“Included in the Ukrainian war crimes is the Ukrainians’ rape of girls and young women which has spread HIV and caused many unwanted pregnancies in dank basements where infants now struggle to survive as the fathers vanish, killed or just fled,” she added. 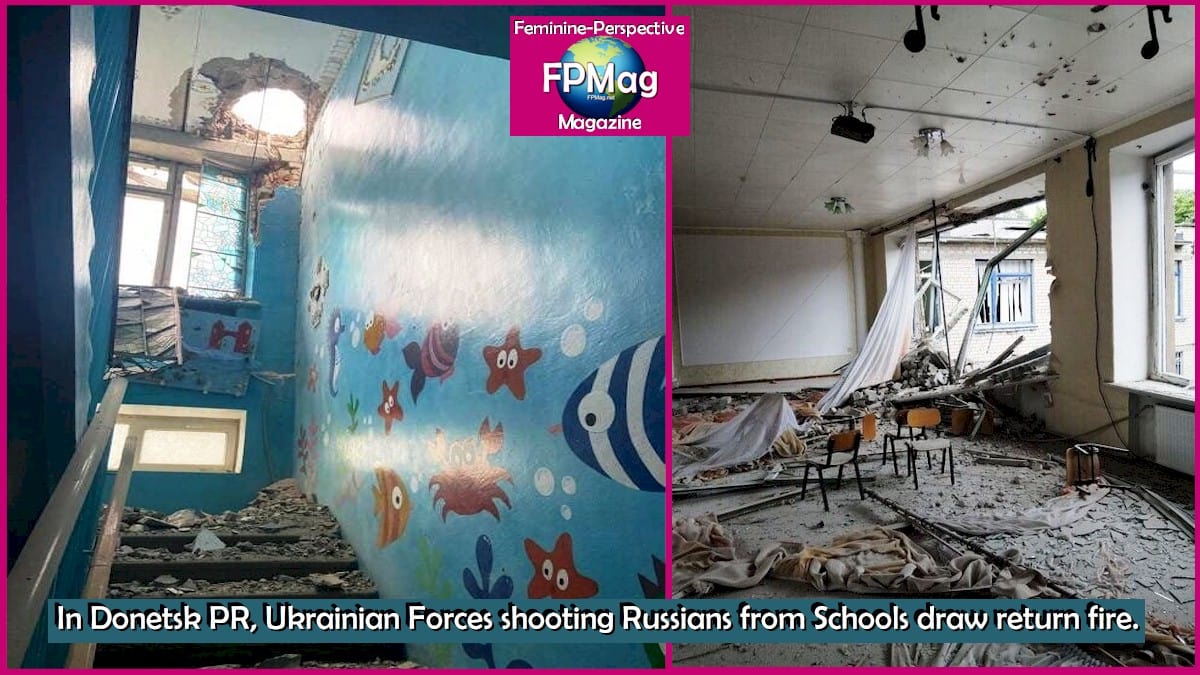 “The Ukrainian military has routinely set up bases in schools in towns and villages in Donbas and in the Mykolaiv area. Schools have been temporarily closed to students since the conflict  began, but in most cases the buildings were located close to populated civilian neighbourhoods,” reports Amnesty International.

“Russian forces struck back at many of the source schools used by Ukrainian forces to attack the Russian forces. In at least three towns, after Russian bombardment of the schools, Ukrainian soldiers moved to other schools nearby, putting the surrounding neighbourhoods at risk of similar attacks,” reports Amnesty International.

“Being in a defensive position does not exempt the Ukrainian military from respecting international humanitarian law,” the AI Secretary General said.

“For eight years, the Kiev regime has committed egregious crimes against citizens of DPR and LPR. Thousands of innocent people died, including children. At the same time, the military development of Ukrainian territory by the North Atlantic Alliance has begun. Kiev is on course to join NATO. All this has created unacceptable threats to Russia’s security,” said Russian Defence Minister General of the Army Sergei Shoigu, speaking at a plenary session of the First International Anti-Fascist Congress.

▫️Against this backdrop, he said, the Supreme Commander-in-Chief took the only correct decision to conduct the special military operation in February.

▫️Its main purpose was to protect the inhabitants of Donbass from genocide by the Kiev regime. Shoigu said that during the first days of the special operation, the Russian Armed Forces “encountered inhuman tactics of the Ukrainian formations.

▫️”Soldiers of AFU and the Nationalist Battalions are hiding in city blocks, using civilians as human shields, using both residential buildings and social and energy infrastructure as strongholds and firing points. Having been defeated on the “ground” and retreating, they deliberately destroy everything around them so that nothing is left for civilians. The same tactics were used by the German Nazis during the Great Patriotic War,” said the Russian Defence Minister.

Many thousands of foreign humanitarian workers are in Ukraine

According to lagging data available from UN Members’ overseas foreign workers records, more than 27,000 people from 52 countries have volunteered to work in Ukraine.  Alongside them are foreign medical professionals volunteering in both combat and humanitarian-focused medical roles to help alleviate the growing humanitarian crisis.

“Many foreign humanitarian workers have been killed by all sides in the combat areas,” notes Dale Carter of The RINJ Foundation.

A sampling of US population opinion was conducted, (Ukraine-War-Polling) in August by the Quincy Institute.

● 89% of voters are concerned about the loss of lives and livelihoods of Ukrainians as a result of the war in eastern Europe.

● 68% of voters believe that their personal finances are being directly impacted by the ongoing war.

● 78% of voters are concerned about the conflict turning nuclear.

● 82% of voters report being concerned that the war will cause long-term global economic hardship, including here in America.

Residents of Donbass are saying their best and safest option is to stay at home and wait for the Russians to take control of their area.

Sources in Kiev are saying the government of Ukraine does not have the funds to pay pensions and other amounts due.

Several media outlets are reporting the Foreign Minister of Turkey claiming NATO is trying to prevent the success of the Turkey-negotiated accord between Ukraine and Russia. FPMag has confirmed with Ankara that the Minister said only some European members of NATO have impeded the accord and that the United States has taken steps to facilitate the desperately needed flow of Russian fertilizers and both Ukrainian and Russian food grains.

“There are countries within NATO that want the Ukraine war to continue. They see the continuation of the war as weakening Russia. They don’t care much about the situation in Ukraine,”  Turkish Foreign Minister Mevlut Cavusoglu has complained since spring of 2022.

Profoundly,  Mr. Bandow in the American Conservative concluded in a manner that should appply to all nations, on Aug 18, 2022.

“It is difficult to assess the charges and counterclaims made in any conflict. The energy of Ukraine’s propaganda operation, determined to eradicate any questions about Kiev’s behavior, is no surprise. However, US and allied policymakers must resist Ukraine’s attempt to replace unpleasant facts with comfortable fantasies. Washington needs the best information possible to protect the American people. They, not the Zelensky government, should be the Biden administration’s top priority.”

Video: Another dose of Reality in Kherson