The CIA Murder of Alexander Dugin daughter in Moscow puts the USA over the line.

American media justifies the CIA/DRG murder of Daria Dugina as being the murder of a woman, daughter of a person who supported the invasion of Ukraine. “Nobody in Russia knows Alexander Dugin as an advisor to Putin,” says Svetlana, an organizer of the RINJ Women’s rights group, in Russia, already angered by the American ‘discarding of Afghan women a year ago‘.

“Russia, like America, has a horrible record on gender equality and misogyny but this idea of murdering daughters as a way of retaliating against the men they don’t like is putrid male misogyny that cannot stand,” said Svetlana in a phone conversation with FPMag‘s Melissa Hemingway.

The murder comes at the same time that the USA is targeting Russian Naval yards in Crimea and Washington’s continued support for Kiev during Moscow’s military operation is putting ‘America on the verge of becoming a party to the conflict’, Russia’s deputy Foreign Minister, Sergey Ryabkov said Friday, perhaps putting it mildly as a quintessential diplomat.

“We don’t want escalation. We’d like to avoid a situation, in which the US becomes a party to the conflict, but so far, we don’t see any readiness of the other side to take these warnings seriously,” Deputy Foreign Minister Ryabkov told Rossiya-1 TV this week.

“Excuse me, what kind of self-defense [is this for America] is it, if they [USA] are already openly talking about the possibility of attacking targets deep in the Russian territory, in Crimea?” the Deputy Foreign Minister speculated. 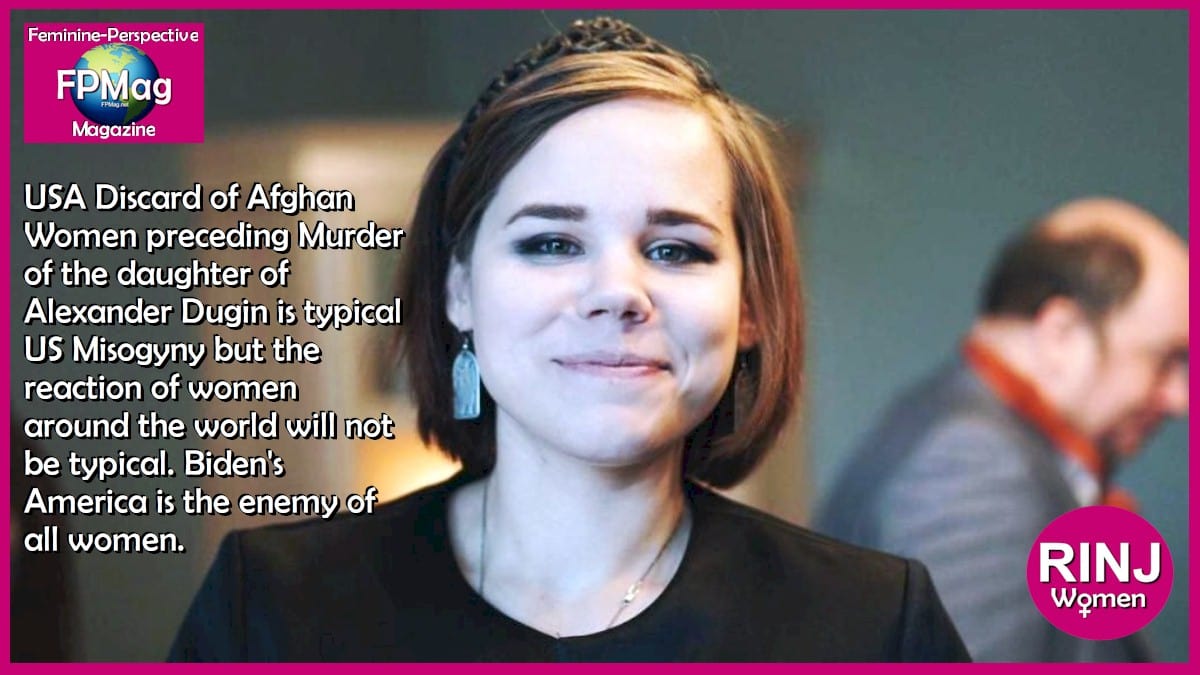 “USA Discard of Afghan Women preceding Murder of the daughter of Alexander Dugin is typical US Misogyny but the reaction of women around the world will not be typical. Biden’s America is the enemy of all women,” says an emailed letter to thousands of RINJ Foundation American workers. Photo Credit: The RINJ Foundation.

Dale Carter, security director of The RINJ Foundation claims that women sources and eyewitnesses in Moscow are blaming the CIA for the murder of Daria Dugina (29), the adult daughter of Philosopher  Alexander Dugin.

“Presumably the Ukrainian DRG was involved which is part of the Ukrainian spin—the same members seen at the USA Embassy in Moscow by women employees at the consular section. The West is spinning the story as ‘Ukrainian DRG blows up the car of an intellectual close to Putin in the Russian capital‘, but the truth is they killed the daughter of Alexander Dugin, her dad a philosopher close to much of the world but truly not connected to Putin as is claimed by Kiev and Washington. Mr. Dugin’s daughter was in what would have been the lead vehicle had it got rolling. The car belonged to her father. He was waiting to follow her in another vehicle, possibly hers. The targeted vehicle had been parked for a period of time and apparently had undergone recent repairs. The people involved in the murder include CIA operatives with witnessed connections to the same DRG operators seen at the car, according to women close to the information,” commented Ms. carter. 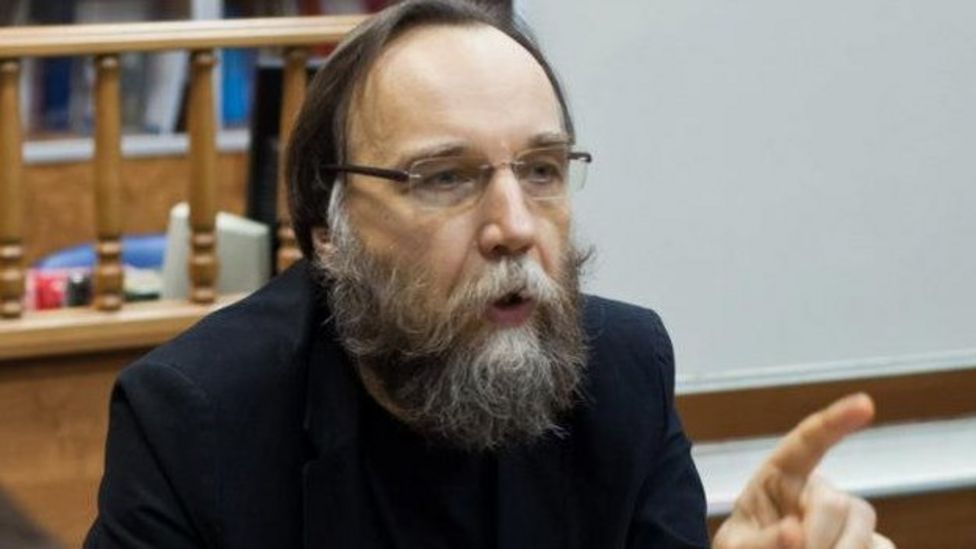 Police continue their investigation of the CIA murder of Alexander Dugin’s daughter,  in Moscow. 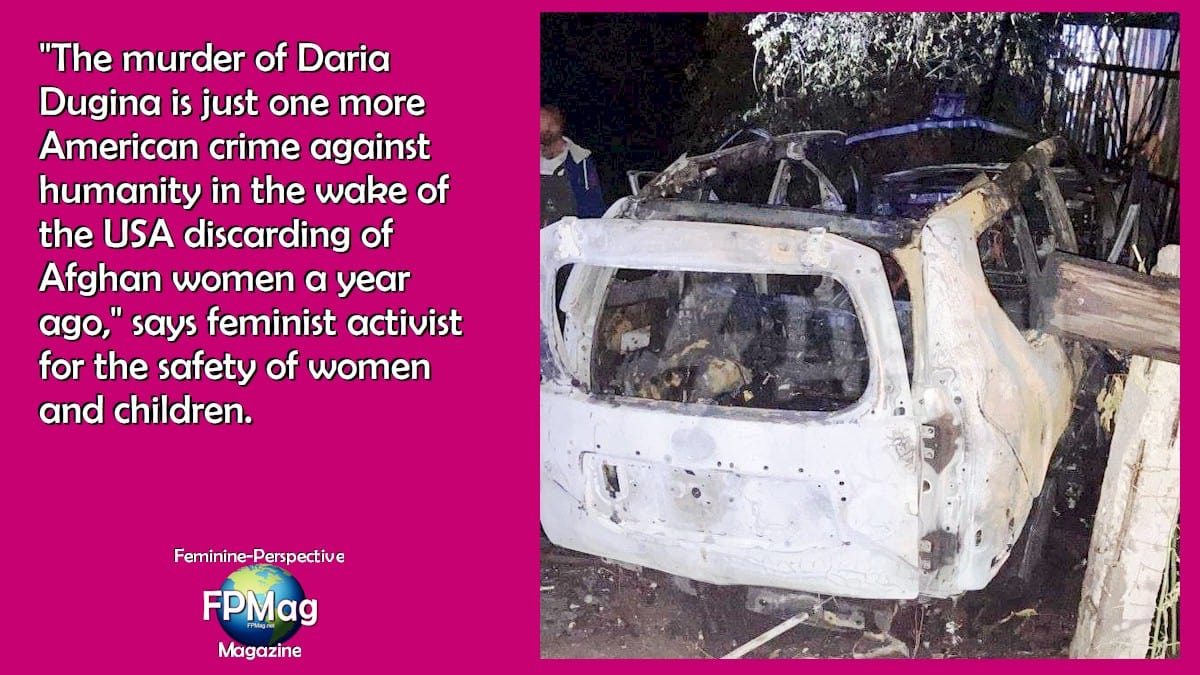 “The murder of Daria Dugina is just one more American crime against humanity in the wake of the USA discarding of Afghan women a year ago,” says feminist activist for the safety of women and children. Photo credit: source supplied.
Art/Cropping/Enhancement: Rosa Yamamoto FPMag