Women and children in the millions will be slaughtered if the Pentagon gets its way using the Pentagon-stuffed Biden suit. The Pentagon is planning war with China and Russia with 100% confidence.

It will be sooner than later before the ‘mid-terms’ because the Pentagon fears losing control of public policy if Biden loses the Congress and the Senate.

Deobfuscating the threat to women and children in the current multipolar human security condition was the theme of a planning session of The RINJ Foundation global operations people meeting in Delhi, India. A summary of a discussion has emerged on the safety of women and children around the world in the context of a Hybrid WWIII. An agreement summary for future operations will be sent to the Board of Directors for consideration. Here is the scoop. 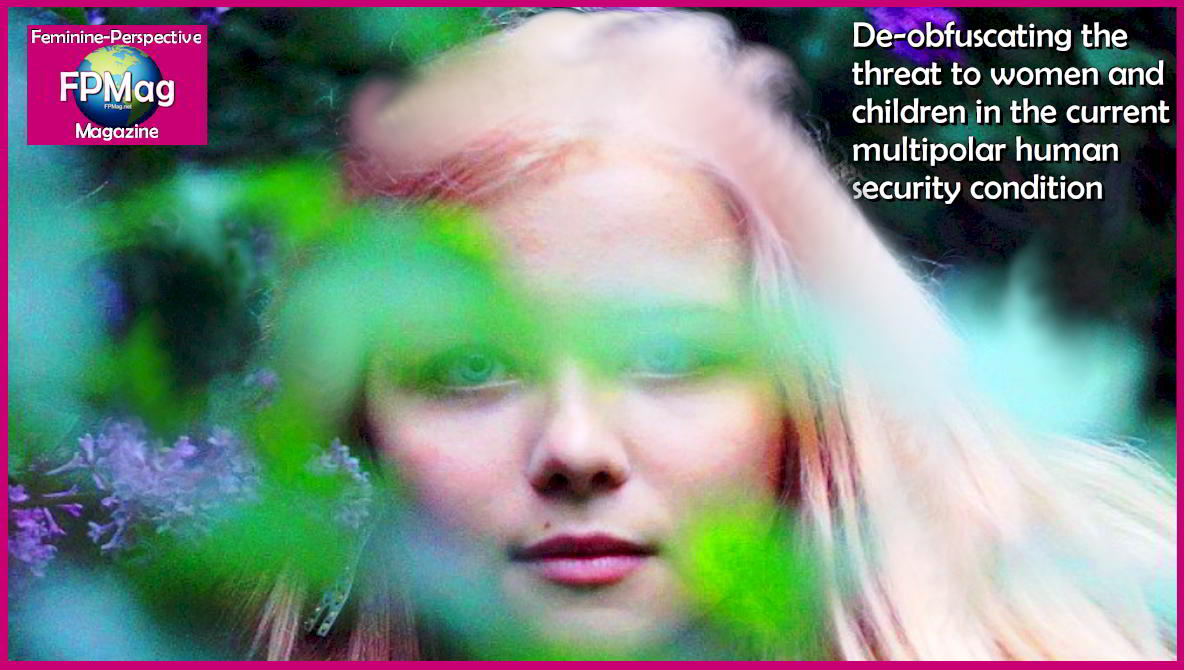 De-obfuscating the threat to women in the toxic multipolar security condition
Art Based on submissions by Nundry. Art/Cropping/Enhancement: Rosa Yamamoto FPMag

“The reason why thousands of tons of illegal weaponry are pouring daily into Ukraine to keep a war going is that the USA is seeking to destroy and subjugate Russia by dragging out the conflict and achieving the ouster of the Vladimir Putin government in Russia,” is the leading paragraph in a document the parties received in their welcoming kit.

“The Pentagon, which owns empty-suit Biden for nearly three more years, will, on Russia’s collapse, then reposition and rename its misaligned NATO conglomerate to include Japan, South Korea, Australia, likely not New Zealand, Philippines, and reluctants Vietnam, Malaysia and Indonesia to fight China and control India,” suggested Katie Alsop, executive director,  in a welcoming letter to attendees.

In an appendix letter from the RINJ security contractors, the commanding officer, a woman in an all-women guard force,  wrote, “the Ukraine proxy war is America’s practice for war against an emerging multipolar world in which India, Europe, China and Russia challenge America’s singular but rapidly declining super-military power and financial dominance.”

“Thus far, America has succeeded in diminishing the European Union (EU), controlling EU leaders and diluting EU with Ukraine which it entirely controls and by removing Britain which is part of the Anglosphere. (The UK typically despises the ‘Wog immigrants’ that the EU is willing to accept and disliked being scolded for selling armaments into conflicts like Yemen, Iraq, Afghanistan and all over Africa.),” noted the security report.

“American and Brit military teams, out of uniform, are in Ukraine, in Kiev, in Mariupol, and all across the country, running the war in every aspect of controlling the Ukrainian armed services, recruitment, weapons distribution, government public policy, government foreign policy, intelligence and targeting. It was under American direction and satellite tracking systems that Ukrainians sunk the Moskva using the new Neptune anti-shipping missile,” the security contractor submitted.

The R-360 Neptune is a Ukrainian anti-ship cruise missile developed by the Luch Design Bureau based on the Soviet Kh-35 anti-ship missile.

Sevastopol, 16 April 2022—Russian Federation Navy Commander-in-Chief Admiral Nikolai Yevmenov met with the crew of the sunken Moskva missile cruiser in Sevastopol on Saturday. On Thursday, the Russian Defence Ministry said the flagship Moskva sank after ‘an ammunition explosion’, however, ‘all the 500 crew were rescued’.  Note: This statement conflicts significantly with multiple sources. Pentagon Spox John Kirby had said on Thursday that the US believes the Moskva was making its own way east. The Russian Federation reported that the vessel had been evacuated and was making way for Sevastopol.   Video courtesy Ruptly

The USA military describes the Neptune as an anti-shipping cruise missile with firing range of 280 kilometers and probably more. The Russian warship Moskva, a cruiser class, is roughly 186 meters from bow to stern. Moskva was located some 60 kilometers south of Odesa when it was hit by two of the new Neptune missiles, with the help of American tracking and guidance, according to two US sources, one in Ukraine and one in Poland, who do not wish to be named.

Sources who monitored communications at the time suggest information that conflicts with Russian Federation statements. Sources say some 40 crew members aboard the Moskva were killed or injured in the attack. This has not been deciphered exactly or firmly confirmed. Russia has not mentioned casualties but has kept two ceremonies involving the surviving crew members, ‘close to the vest’.

The cost of America’s and its Anglosphere allies’ highly illegal activities in Ukraine is over 40,000 Ukrainian lives so far, tens of thousands of Russian lives including those in the Donbass, and over 7 million displaced Ukrainians,” writes the CO.

“Human lives are irrelevant to these absolutely corrupt leaders of the Anglosphere and their nearly perfect puppet, Volodymyr Zelenskyy,” notes the security report.

The Russian ‘military operation’ in Ukraine, which began on 24 February 2022, can be better understood in the context of an eight year war of relentless military assaults by Kiev on the ethnic Russians of Donbass, using Nazi regiments financially supported and trained by the Anglosphere members of NATO, against the Russian population of Donetsk and Luhansk republics in the Donbass region.

Some 14,000 ethnic-Russians were killed by the Anglosphere portion of  NATO backing the Kiev regime and their traditionally Russian-hating Nazi regiments. (Nazis killed 25 million Russians in WWII.)

“Complicit in this strategic criminality is António Guterres of the United Nations, Jens Stoltenberg of NATO, Boris Johnson of the United Kingdom, Scott Morrison of Australia, Justin Trudeau of Canada, and Joseph Biden who leads the thick-as-thieves patriarchy of Anglophone nations, Canada being the poor and stupid cousin because it bilingually speaks French, another reason why Quebec should seek independence and get away from this deadly game of old fools destroying human development and preventing advancement of developed and developing nations all for their own personal benefit and the benefit of their corporate benefactors,” advances Katie Alsop.

The enemies of the Anglosphere are those nations like India, China and Russia whose capabilities in some ways now exceed those of the FVEY gang of racist male pricks running the world into one disaster after another. 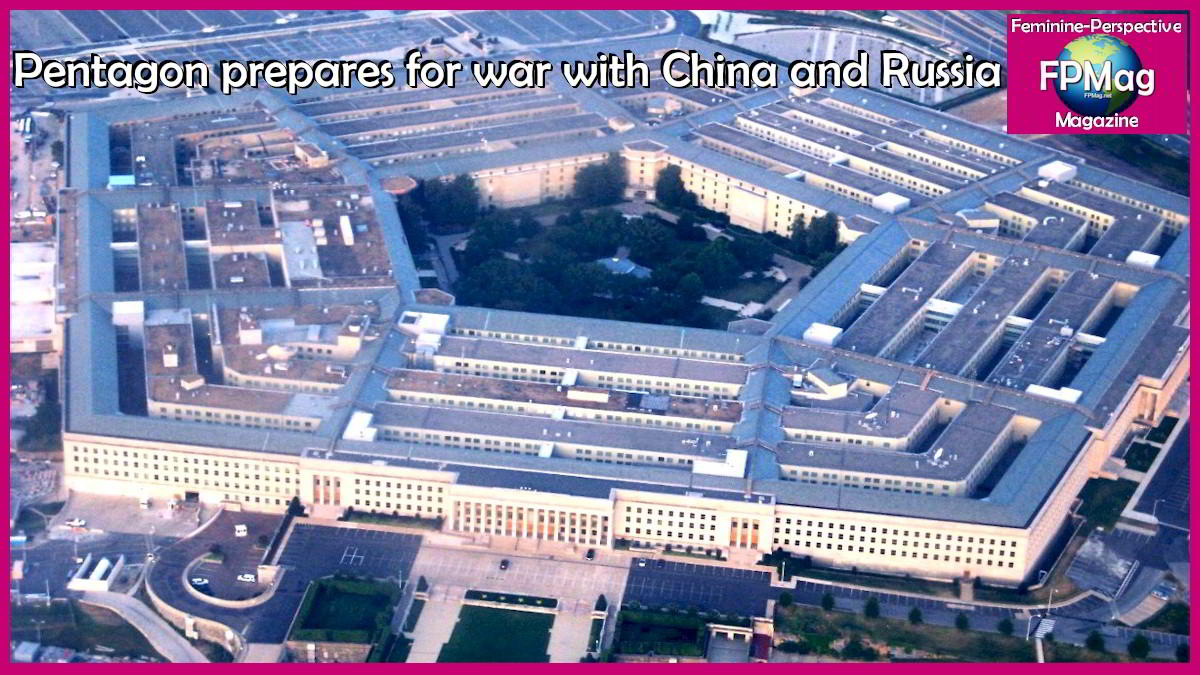 Pentagon: we are preparing for a possible war with Russia and China.
Photo Credit: Greg West. Photo is cropped. Art/Cropping/Enhancement: Rosa Yamamoto FPMag

The Anglosphere is responsible for a horrid series of disasters killing millions.

“Each of these countries’ leaders, Canada, Britain, Australia and America, with their poor or even irrational mitigation measures, including the suggestion of drinking Lysol or irradiating oneself with deadly UVC ozone lamps in America, and in Canada, denying the necessity of respirator or any type of masks, and in Britain, partying like it’s 1999 at 10 Downing,  killed more of their populations during the COVID-19 pandemic, per 100,000 population (136,287,800 Cases and 1,334,588 Deaths), than did the rest of the world,” reported Dr. Fred Harris in a brief. Dr. Harris is head of the Civil Society Partners against COVID-19 tracking team in Singapore.

“Leadership teams of Morrison, Johnson, Trudeau, and Biden do not appear to care about the wellbeing of their constituents and would rather fight with their constituents in a ‘my way or the highway‘ paradigm using unconstitutional human rights violating edicts against personal freedoms. These leaders only seemed to care about their own personal interests and the welfare of their corporate supporters as is indicated by the evidence of their dying, poor and ethnic populations, versus the massive pandemic enrichment and advancement of their billionaires and corporate leaders,” writes Dr. Harris.

“The assumption of these leaders is that their enemies are the same way, incapable of caring about their own people. That could not be further from the truth in both China and Russia. The northern Pradesh’s of India make me wonder about the government here in India but otherwise the same can be said of India. That then suggests that all military actions of the USA for large populations will be like what they were in North Korea in the 1950s when America deliberately carpet bombed the country with more tonnage than was used in all of WWII thus killing at least three million North Koreans in the worst single war crime since WWII. While the West’s leaders languish in ultra comfortable underground bunkers, the rest of the world will be in a state of nuclear winter,” said Dr. Harris.

“One can say what they like about the brutality of Russian soldiers but in fact the death statistics related to military violence in Ukraine seems to be the same on both sides, around 40,000 each, by 17 April 2022, but including the deaths since 2014 in Donbass, the American side in Ukraine has killed about 14,000 more people than the Russian side has killed,” added Dr. Harris.

“Each of Canada, Britain, Australia and America were involved in the eventual massacre of up to one million Iraqi people from 2003 to 2011 and then 2013 through to the present time in Iraq initially under the phony ruse of there being weapons of mass destruction in the Saddam Hussein arsenals in 2003 through 2011. And then following 2013, ISIS uprisings began. Dealing with their problem of the Islamic State uprising was bloody. ISIS is a thug organization the Anglosphere had created in far Northern Iraq to help fight the Iraqis in the south,” submitted Dale Carter, Director of Security for the RINJ Foundation.

“Each of Canada, Britain, Australia and America are complicit in the fiasco in Yemen partnered with criminals like Omar al-Bashir formerly of Sudan, who killed some 300,000, mostly women and children, in Darfur, and partnered with Mohammed bin Salman Al Saud (MBS) who murdered Washington Post columnist Jamal Ahmad Khashoggi and imprisons women for speaking out against human rights violations or for driving cars before the law changed,” wrote Ms. Carter later in her brief.

Today, Yemen’s humanitarian crisis impacting women and children is according to UN statements, the worst in the world, due to widespread hunger, disease, and attacks on civilians.

But Afghanistan is quickly overtaking Yemen in the violence and hunger threat to the lives of women and girls according to RINJ Women operational management of women’s birthing clinics and shelter units in that country.

From Afghanistan, Gracie Edwards who is the regional medical director from Kandahar, reports that “pre-teen and teen girls are out of school for over 7 months, now. Children past grade six do not continue their education. Girls in grades 1-6 returned to school in 2021 but their older sisters have zero access to education,” she wrote in a brief for the welcome kit, but was unable to attend the Delhi conference.

Afghanistan could see near universal poverty by mid-2022, with 97% of Afghans impoverished, according to the United Nations.

Dr. Tedros of the World Health Organization has repeatedly drawn attention to the Yemen crisis saying that until all nations have ended COVID-19, the pandemic will not end. Women, being the primary care givers at all levels of society, are  the most impacted by the drawn-out SARS-CoV-2 pandemic.

“Yemen remains one of the largest humanitarian crises in the world, with around 23.7 million people in need of assistance, including almost 13 million children. 400,000 Children are acutely malnourished and fighting for their lives in Yemen,” says UNICEF.

The women’s group closed their meeting saying that the changes to operational procedures will be what the Board of Directors approves out of a list of suggestions, all within the realm of financial feasibility. “But nothing of our current operations will stop, only enhanced. Additional operational elements will be introduced,” said Ms. Alsop.