The facts about Mariupol are obscured

The flag of the Donetsk People’s Republic (DPR) now flies high over Mariupol which is unequivocally under the leadership of Denis Pushilin, DPR leader, who has a full complement of DPR city workers and DPR EMS services on the job in Mariupol.

Volodymyr Zelenskyy recently threatened that peace talks would end if Russia was ‘too hard’ on the neo-Nazi brigades in Mariupol.

Putin has said that he called off a mission to roust the hiding masses down as deep as 300 meters below the Azovstal steel works on the coast of the Sea of Azov. Experts FPMag spoke with say the only way to get the people out is with a chemical attack of chlorine derivitives,  chloroacetophenone (CN) and chlorobenzylidenemalononitrile (CS), also known as riot control agents.

All further peace negotiations are canned, according to US State Department officials (2) who do not wish to be identified. The ongoing peace talks have been fully cancelled between Ukraine and Russia by the USA/Ukraine side under orders from Washington DC according to a State department official. But Joe Biden may have contradicted that edict when he said that Mariupol is still in Ukraine hands or words to that effect.

Russian Foreign Minister Sergei Lavrov claimed as the week ended that the updated proposal from Moscow had gone unanswered. “We were negotiating. Now they have stopped because five days ago, the next proposal we passed to the Ukrainian negotiators, one that was formulated based on their comments at that time, remains unanswered,” he said in a televised press conference.

One of the Washington sources, commented on the massive increases in US heavy weapons and training going into Ukraine against the Russians noting that “As the crazy man in the White House continues to scream for more Russian blood, people better become accustomed to more panic evacuations around Washington DC as was the case on Friday when the Capitol building was evacuated.”

Joe Biden says he is adding another 1.3 billion dollars worth of heavy weapons donations to Ukraine and will continue to do that for a very long time, Mr. Biden said to press at a media briefing.

Joe Biden who is directing the war in Ukraine as if it is between himself and Russian Federation President Vladimir Putin, also says that, “It’s questionable whether he [President Vladimir Putin] does control Mariupol,” Biden said in response to a question from reporters, adding that Putin should allow at least civilians to flee the besieged area. “That’s what any head of state would do in such a circumstance,” despite his press office already stating that the Russians had made several attempts to invite soldiers and civilians to leave unscathed.

“There is no evidence yet that Mariupol has completely fallen,” Joe Biden insists.

But capable medical workers are complaining that this Hybrid WWIII  is between two males, “Biden and Putin, neither with a credible claim to being able to grip reality; or any significant cognition of the global catastrophe they are causing with their exploitations of their nations’ massive weapons inventories for their own ill-advised warmongering games.”

This comment is embedded in a lengthy interview and debriefing with Dr. Nassima al Amouri who is the Medical Director for The RINJ Foundation  after she returned to her regional command in Syria following weeks spent in all parts of Ukraine.

“Mental health is not my major specialty, but surgery including neurological and brain surgery are part of the work I do. I think about patients who have recovered from head trauma in war zones, and how they progress post-surgery. I also think about their slow return to full or nearly full cognitive function and all the tests we conduct to measure our therapy outcomes. To put this in the simplest terms, I have a good sense for decline or improvement. I am emphatically saying that in this day and age, none of Messrs Biden, Trump, Putin, or those smooth-talking sociopaths Zelenskyy, Bashar al-Assad and Boris Johnson, should be in charge of a garbage truck, let alone a whole country,” said Dr. Nassima al Amouri when asked about her initial remark.

“The obviously deteriorating and dangerous US President Joe Biden says he is trying to ‘keep Putin from overrunning the country [assume Ukraine].” But Putin has clearly—and history says it clearly—that Russia’s interest is the ethnic-Russians in the Donbass regions of Luhansk and Donetsk over these past eight years that the USA/Ukraine blitz has been shelling the crap out of those people whittling the population down by a million who fled; and killing about 14,000 now dead. And that is continuing today, probably past 20,000 Russian civilians killed,” explained Israeli security analyst Simon Baldock from Tel Aviv,” who added, angrily, “I don’t want to be talking about that dangerous nitwit Biden who along with Putin are both bragging about their wins in Ukraine. He needs to be put out to pasture before he kills the planet.”

Included in the latest gift to Ukraine, are Lockheed/Martin FGM 148 Javelin equipped drones and also heavy artillery that the US will train Ukraine soldiers to use.

According to local sources, there is an estimated 650 civilians and 1100 neo-Nazi Azov and other Nationalist brigade soldiers plus a few Ukraine regulars hiding underground the Metinvest B.V. factories of the Azovstal brand iron and steel works.

“Occasionally, but not as often lately, Ukrainians of the Azov regiment storm residential homes in Mariupol apartment buildings, eject the residents, and steal their food and water of which they are in short supply. On their way through the streets and damaged buildings it is easy for them to pick up unused Javelin shoulder launched anti-tank weapons or either American or European anti helicopter missiles. They are left in piles everywhere,” writes Alona Adamovich, Regional Director, RINJ.org/nurses Eastern Ukraine.

“The Javelins are the weapons the Ukrainian Azov Nazi units want the most because they can attack buildings, armoured personnel carriers and tanks with those. 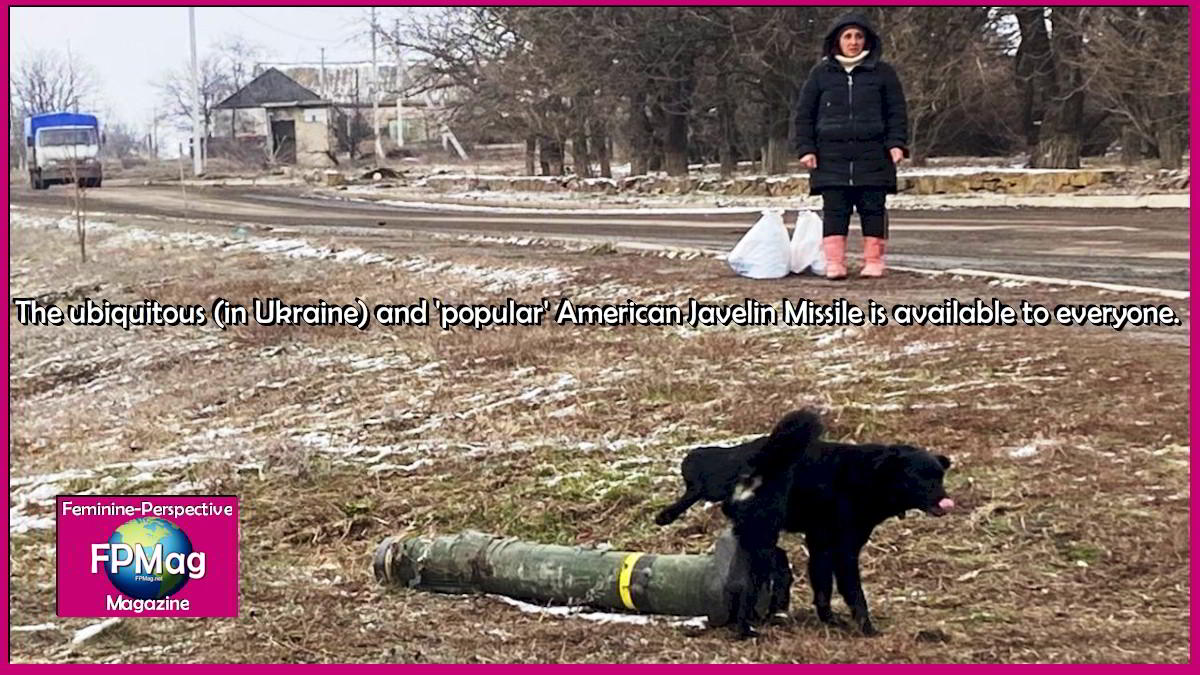 Message of team lead in Mariupol: “NGO medical workers assist and respect the Ukrainian, Russian and Chechen military medics in Mariupol. For a Ukrainian doctor who is currently in the underground of the Azovstal steel works, we gave pharmaceuticals to our courier to get to him for a civilian patient. We disagree on how the Azov Brigade corralled civilians from the school and the streets to bring inside the steel factories. Civilians should not be in the same locale as fighters, even if they are armed. Doc knew the woman I have replaced here in Mariupol and said she was a Godsend, an angel. She is gone with our love. That’s how we care. Sadly when we learn of the trauma hospital shelled in Donetsk we all feel the ache of how much we love each other and help each other to save lives. We see no sides, only patients, people who need our help. If only the world saw things our way.” Alona Adamovich RINJ.org/nurses Regional Director, Eastern Ukraine

Capable medical workers are complaining that this Hybrid WWIII  is between two males, “Biden and Putin, who are neither with a credible claim to being able to grip reality; or any significant cognition of the global catastrophe they are causing with their exploitations of their nations’ massive weapons inventories, all for their own ill-advised warmongering games.” 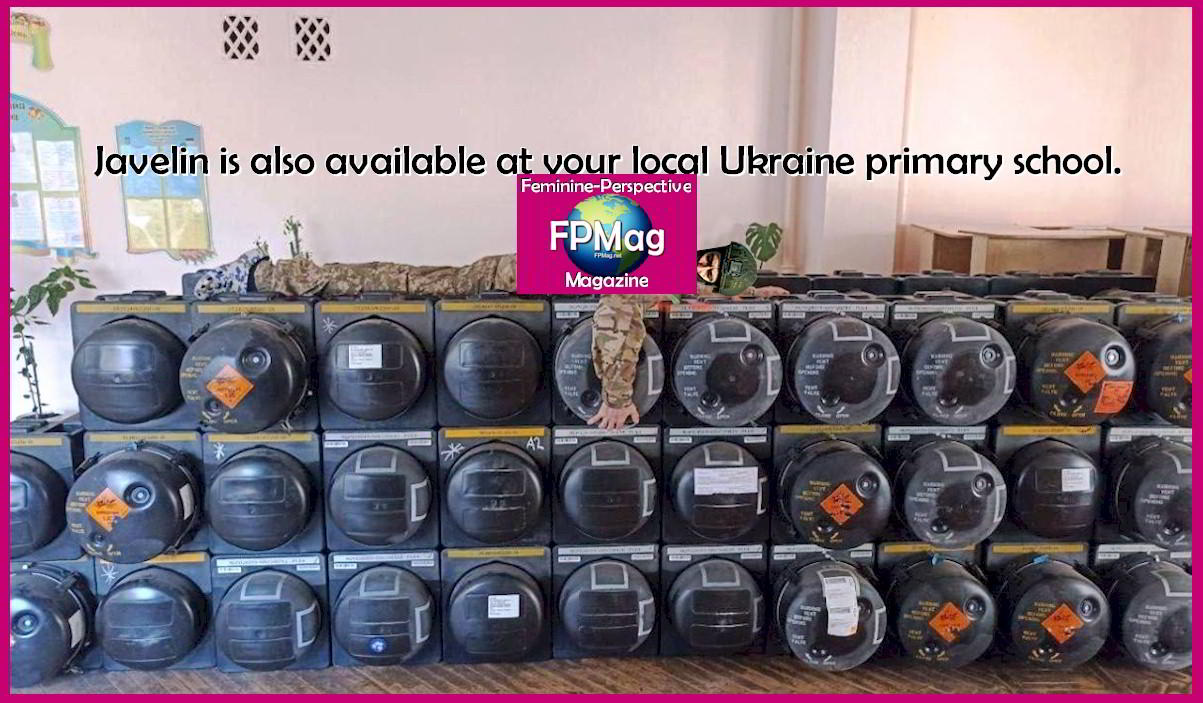 The USA has been curious about the “Black Hole” in Ukraine through which American supplied military Arms have been vanishing. According to a nurse in Mariupol, “One needs to be careful not to bump into them when walking down the street.” Photo Credit: Members of the Armed Forces of the Chechen Republic. Photo is cropped and enhanced for clarity. Art/Cropping/Enhancement: Rosa Yamamoto FPMag 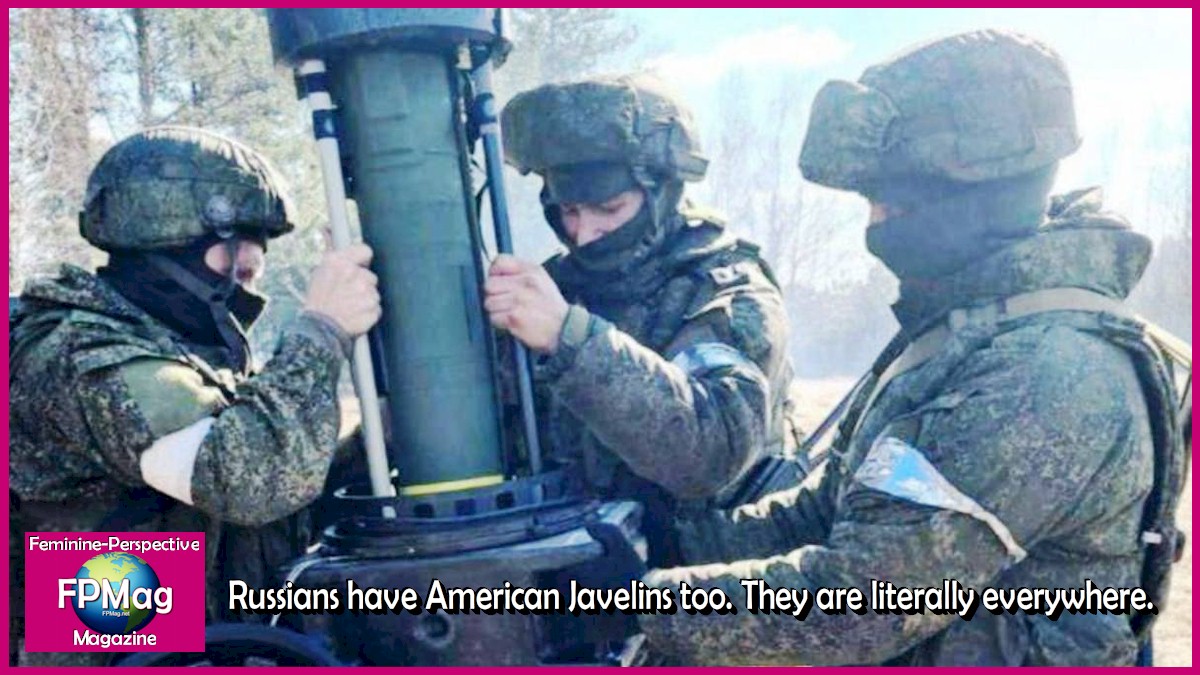 American Lockheed Martin Javelins strewn all over Ukraine. Here they are used by Russian Soldiers. Photo Credit: Members of the Armed Forces of the Chechen Republic. Photo is cropped and enhanced for clarity. Art/Cropping/Enhancement: Rosa Yamamoto FPMag

“When the Javelin hits an apartment wall or a school wall they make a round hole on one side and then blow up in the middle of the building killing everyone inside and nearby and destroying everything. All sides have figured out this trick and when they come across a pile of those weapons they grab them and use them against each other. All the fighters are inside people’s residential buildings.

“Any buildings which showed no tactical advantage and are not overlooking a street big enough for a tank to drive down, are unscathed.

“All buildings that provide an elevated snipper nest or antiwar machine lookout are destroyed in the same way with shoulder launched missiles or big tank bullets, [translated]” explained Alona in her written report.

“I hope I have the terminology correct. One of our couriers is a former Ukrainian soldier who just took his uniform off and is now an EMS courier running meds and supplies between places. He explained some of the weapons to me,” she added later in her report.

According to NGO workers managing the staccato schedule of medical evacuations, particularly the elderly and infirmed, there is sporadic fighting across the south and east of the city of Mariupol. The Chechens have been doing a roving patrol, trying to clean up the snipers who are literally killing anyone who walks by including seniors and children according to video footage submitted to FPMag.

“Communications are next to hopeless in Mariupol except via Starlink and short wave radio which lately has been blocked with interference. There are some minor exceptions including encrypted VHF/UHF which is likely all military. RINJ workers are using peer-to-peer Blackberry communication devices and most reports are passed via shared text messages and images to people leaving the area in medivac buses. That traffic appears now to have ceased. There are still two buses hidden in the city,” reports Dale Carter of The RINJ Foundation.

Video: Chechen Commandeer sits in on interrogation of a captured militant of the National Azov Battalion in Mariupol. English below.

According to Chechen fighters in Mariupol, Prisoners of War (PoW) say that the militants stationed in the Azovstal Steelworks have been suppressed by their superiors who benefit from available food and water plus better quarters. Many of their peers, they say, want to surrender, but are afraid of being shot by their Azov neo-Nazi commanders. It’s a legitimate complaint, say most other sources, on all sides, in Mariupol, available for comment.