Russian Foreign Minister Sergey Lavrov has confirmed what dozens of sources to FPMag have been saying all along, that the war in Ukraine is a proxy war.

Minister Lavrov said NATO weapons supplied to Ukraine essentially create a proxy war and that Russian troops will consider the Ukrainian warehouses storing the weapons “to be a legitimate target for the Russian armed forces, which operate as part of a special military operation. And warehouses, including in western Ukraine, have become such targets more than once,” Lavrov said Monday. “If NATO, in fact, goes to war with Russia, through a proxy, and arms this proxy, then in war as in war.”

Minister Lavrov also warned that the nuclear precipice is close but that Russia has ruled out the use of nuclear weapons.

Sergey Lavrov has said previously that the Russian Federation military must finish Washington’s ‘dominance’ on the world stage.

The Russian Federation Foreign Minister also responded to recent calls by EU policy chief Josep Borrell for a ‘military’ resolution to the conflict involving the sending of tens of thousands of American and European troops into Ukraine. According to Lavrov, Borrell’s position  further proves the West’s intent to use Ukraine as a launch pad for anti-Russian activities. Lavrov has often reiterated that “Moscow will not succumb to outside pressure, and will carry on with its stated goals”.

In consultation with thousands of members in Ukraine, the Board of Directors of The RINJ Foundation, a global women’s rights NGO which has flagged 6.5 million women displaced from their homes with their children in Ukraine since 24 February, has issued a statement to be published shortly on this site. Publication is pending confirmation of evidence of nuclear initiatives recently uncovered in the United States.

“Women are talking to each other across all spheres,” the statement reads.

The essence of the statement is a call for the end of combat activities in Ukraine, an absolute ceasefire in Ukraine at noon local time, 29 April 2022.

“Think of this as an order from your mothers, wives, sisters.”

All warring parties in Ukraine, Donetsk PR, Luhansk PR, and Russia must lay down their weapons on 29 April and return to their own countries, their own homes.

The missive further sets out that the military activities in Ukraine are illegitimate by all sides; there is no color of right; and that the only fault or blame lies on an unrestrained misogynistic NATO-member leadership that cares not for the lives of women and children, which two universes are diminishing within the human race.

Furthermore, a huge portion of the human race is in morbid jeopardy caused by food-and energy related sanctions that “threaten the lives of 20%  of the Human Race. These and all sanctions must end forthwith.”

“This type of attempted mass murder is unacceptable.”

Italy and OSCE have been waging war on Donbass until 1 April. Four OSCE officials are now detained with cause and face serious criminal charges.

Since that time, OSCE (Organization for the Security and Cooperation in Europe) Chairman-in-Office and Polish Minister of Foreign Affairs, Zbigniew Rau, and OSCE Secretary General Helga Maria Schmid have reacted to the heaps of evidence found against the OSCE by calling for the release of four members of the OSCE Special Monitoring Mission to Ukraine, lawfully detained as alleged criminals, say officials.

What the OSCE does not say is that it has been delivering munitions to Azov neo-Nazi Brigade members in Mariupol, which activity has been witnessed by three sources, one of which claims to have taken video and supplied same to Leonid Pasechnik, head of the Luhansk People’s Republic whose officers have been investigating the activities of the OSCE and now possess many years of proof of criminal activities, during the 2014-current Donbass conflict, the officers say.

25 Primorsky Boulevard, Mariupol: OSCE monitoring organization has been supplying arms to three of the several Ukrainian neo-Nazis battalions in Mariupol, who during the conflict have been seen coming and going by humanitarian workers, Chechen fighters, and local civilian workers in Mariupol.

“All OSCE field reports since 2014 have been discovered, thousands of Ukrainian war crimes have been documented, which the OSCE later hid in the official reports of the mission in Ukraine,” say Luhansk People’ Republic officials when confronted with the findings of an investigation prompted by the discovery in the now vacated OSCE office—now marked as a crime scene—in Mariupol and the discovery of tons of yet undelivered explosives stored there.

These two images below tell the story. Click to enlarge. 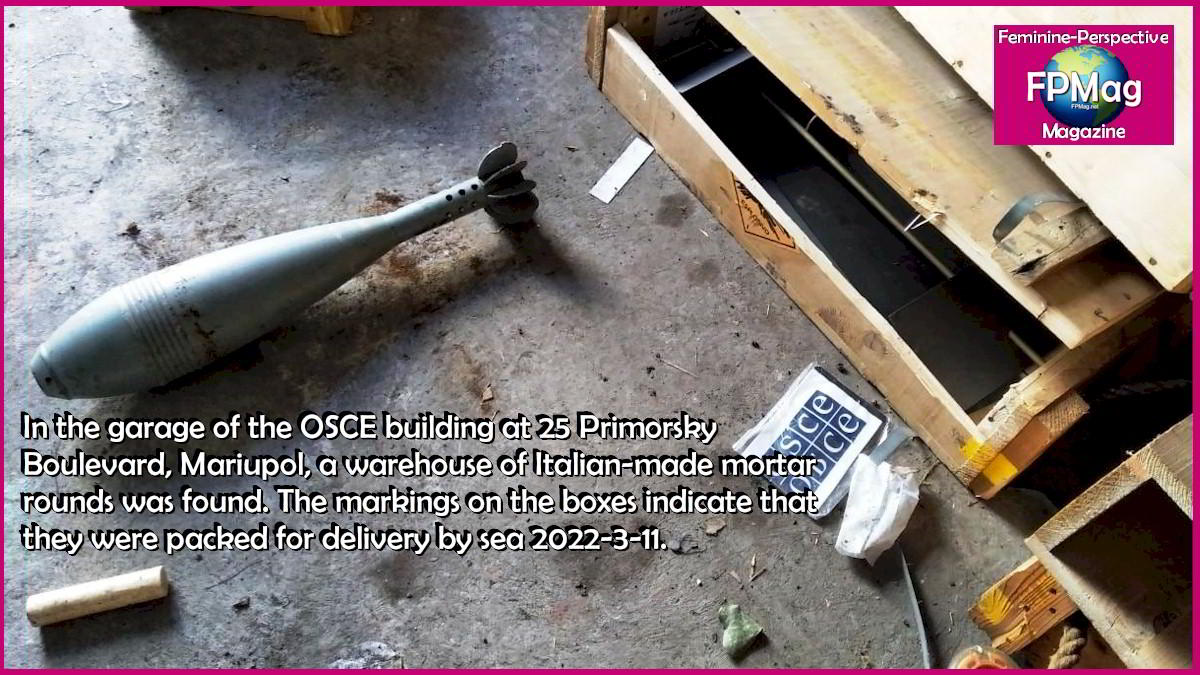 In the garage of the OSCE building at 25 Primorsky Boulevard, Mariupol, a warehouse of Italian-made mortar rounds was found. The markings on the boxes indicate that they were packed for delivery by sea 2022-3-11. Photo Art/Cropping/Enhancement: Melissa Hemingway /  Rosa Yamamoto FPMag 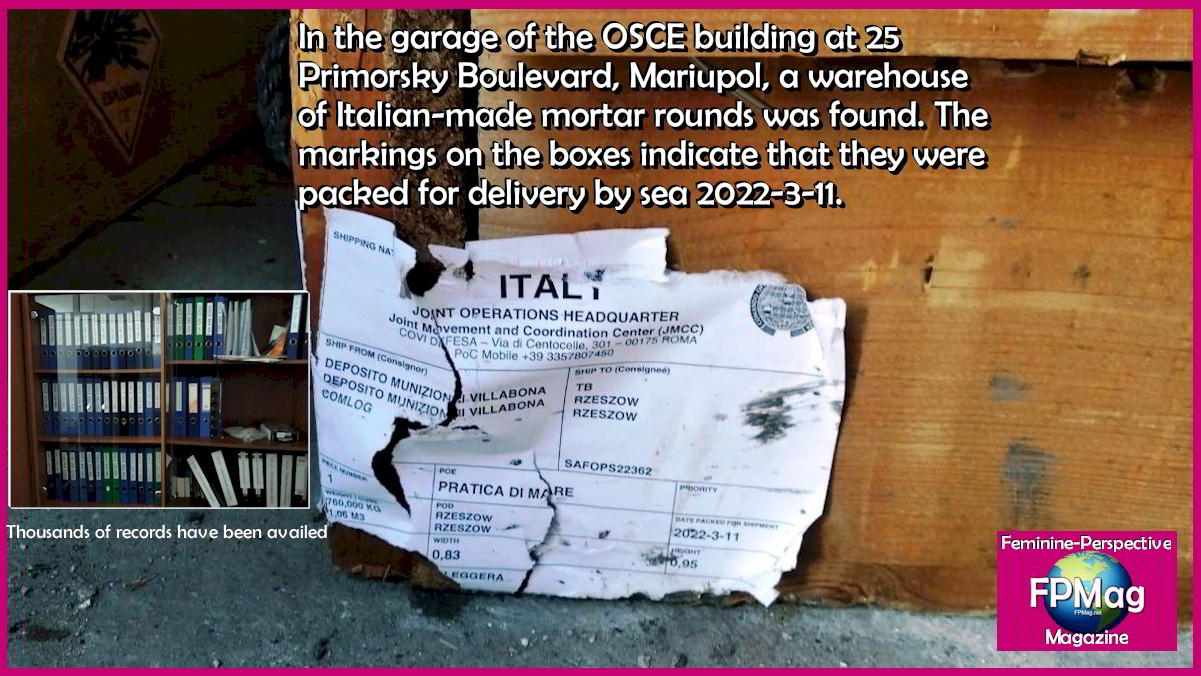 In the garage of the OSCE building at 25 Primorsky Boulevard, Mariupol, a warehouse of Italian-made mortar rounds was found. The markings on the boxes indicate that they were packed for delivery by sea 2022-3-11. 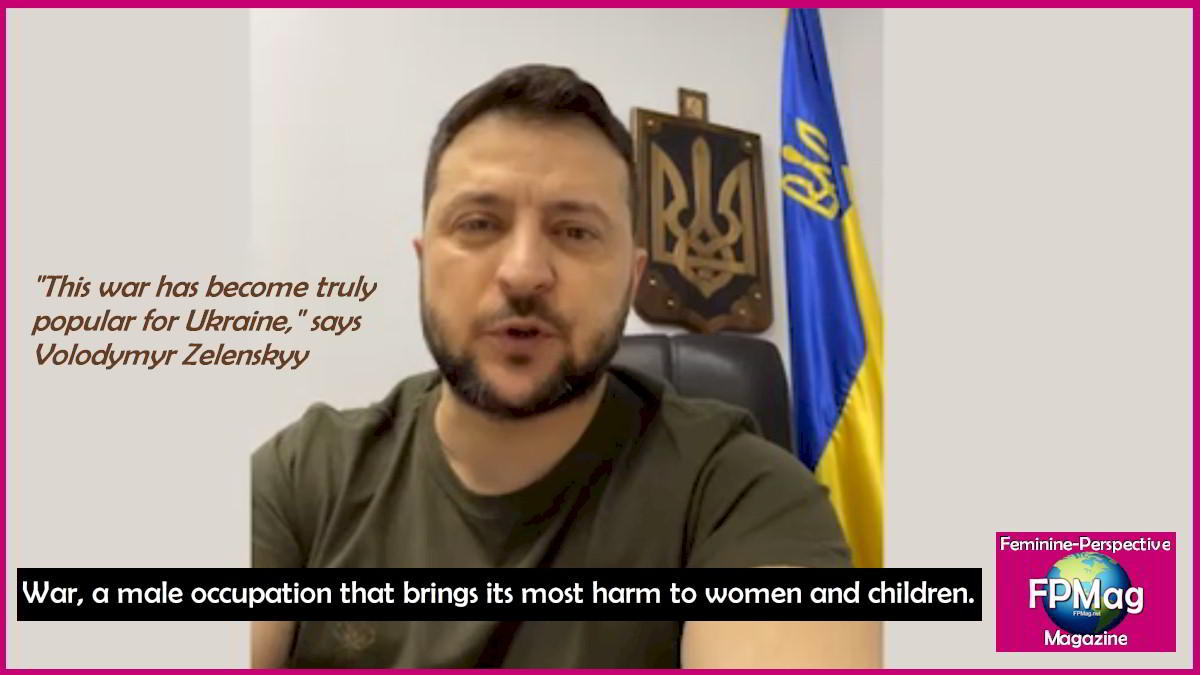 Volodymyr Zelenskyy: “For 2 months of hostilities 9 thousand 781 defenders of Ukraine were awarded state awards. The title of Hero of Ukraine was awarded to 142 of our defenders… This war has become truly popular for Ukraine. And it showed that throughout our territory – from east to west, from north to south – the Ukrainian idea is equally strong, equally national.” Photo credit: screen Capture of Ukrainian President speech 25 April 2022. Art/Cropping/Enhancement: Rosa Yamamoto FPMag

Massive amounts of heavy weapons systems have been delivered to Ukraine because, as USA Secretary of Defence says, “We want to see Russia weakened”

“Lloyd Austin supports Lavrov’s proxy war thesis but ignores the fact that the USA, Britain and Canada have been waging war against Russia in the Donbass region, shelling ethnic-Russian civilians since 2014, in Luhansk and Donetsk republics, killing some 14,000 according to UN accounts,” suggests Dale Carter, the security director of the RINJ Foundation, currently in Kiev waiting to move busloads of Mariupol evacuees out of Ukraine but running into bureaucratic obstacles, that may stem from there being a procession of weapons and NATO proxy managers to and fro Poland-Lviv-Kiev, she said via landline.

“We want to see Russia weakened to the degree that it can’t do the kinds of things that it has done in invading Ukraine,” added Austin.

“America under Joseph Biden sounds as stupid as is Joseph Biden alleged to be by his Republican detractors, because Russia is the only reason for the North Atlantic Treaty Organization to exist. Without a strong Russia, there is no reason for NATO members to even buy a pea-shooter,” added Ms. Carter. 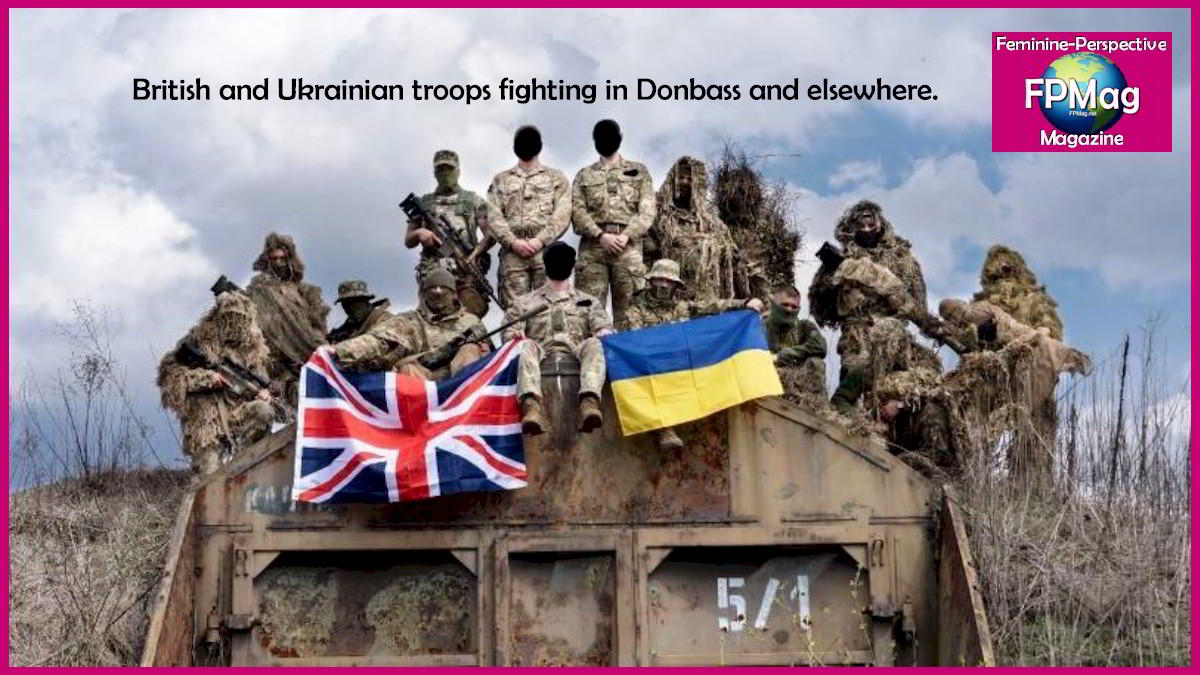 America in Ukraine: Where does one start. American troops are everywhere, mostly out of uniform, directing the Ukraine Ministry of Defence says American advisor in Kiev. 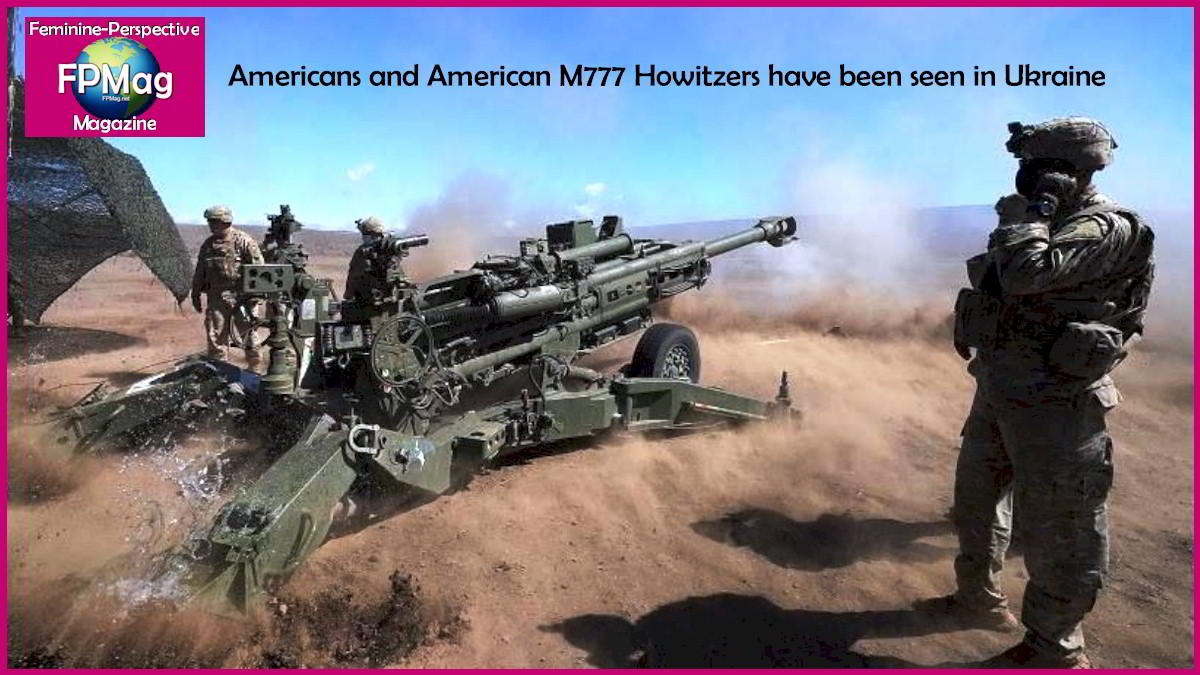