Biden proxy war in Ukraine infuriating Rights of Women Advocates. This was preventable

Joseph Biden and Jens Stoltenberg pushed NATO to the Russian border, something they were told repeatedly would bring a global war. Today in Ukraine,  two thirds of all Ukrainian children have been displaced and 7.1 million women, children and seniors were out of their homes by 1 April. That number today is estimated to be approaching the 10 million mark. The number of deaths is estimated to exceed 22,000 including those who died from COVID-19 for lack of treatment because of the American proxy-war. (IOM Ukraine Displacement Report Round 2)

Video: Which is the smart one running the country? The judge is the smart one but she is not running anything. None of the above. US President Biden explains how he defines America while he suffers the worst approval rating, hovering around 42%, in a mid-term election year—the worst standing in all American history for a war-time president.

Video: Thousands of tons of heavy war machinery loading into Biden’s Ukraine Proxy war with Russia, daily. This will continue until there are no Ukrainians left unless Russia leaves.

Vladimir Putin says he hopes to finish “liberating” the constitutionally defined Donetsk and Luhansk Republics some time in May.

“In the case of this proxy war in Ukraine, Putin had a legitimate complaint. NATO  had gone too far. There were 60,000 Ukrainian and other troops preparing to invade Donetsk and Luhansk in March, to kill or drive out the 6 million ethnic Russians living there; and the American/Ukraine war against those ethnic Russians had gone on too long, since 2014. That was no excuse to use weapons against Ukrainians. America broke the Minsk2 agreement and continued to push NATO to Russian borders. This is reprehensible conduct of a run-amok patriarch which believes it has impunity for any improper act. That impunity is going to end,” advances Ms. Carter.

“Any American leader who kills thousands of White women and White children and causes over five million White women and White kids to lose their homes and need to flee their country is not only a criminal but a stupid criminal deserving the death penalty according to American law, if convicted as a party to these mass murders of women and children, before he kills us all, White or not,” explains RINJ Foundation security director, who is non-White.

“America, leading the Anglosphere (UK, Australia, the USA, Canada and New Zealand), which is all that it leads, has made an issue of which racial slaughters it will support. Thus far it has supported slaughters all over Africa and the Middle East. It wants to kill off the Chinese and is building up nuclear arsenals in Southeast Asia and Oceania to do that. Then it pushed Russia into a proxy war in Ukraine in order to kill Russians leaving the Nazi militia units America armed to attack Donbass this past eight years, to kill everyone. Can this truthfully be said in any other way?”

“The men of the warring patriarch which has been slaughtering women and children in Eastern Europe for the past eight years, must be held to account,” said Dale Carter, security director for The RINJ Foundation, speaking from Ukraine after going missing along with 12 other humanitarian workers over the past four days.

“Emanuel Macron must be voted out of office as the first member of the Warmongering European Patriarch to go. Conveniently, the only choice is a woman, Marine Le Pen.”

“That is why Emmanuel Macron must be voted out and we must be rid of the leaders of NATO, the UN, and each of the countries like Canada, Australia, Britain, France, Germany, America, and more,” says Ms. Carter. 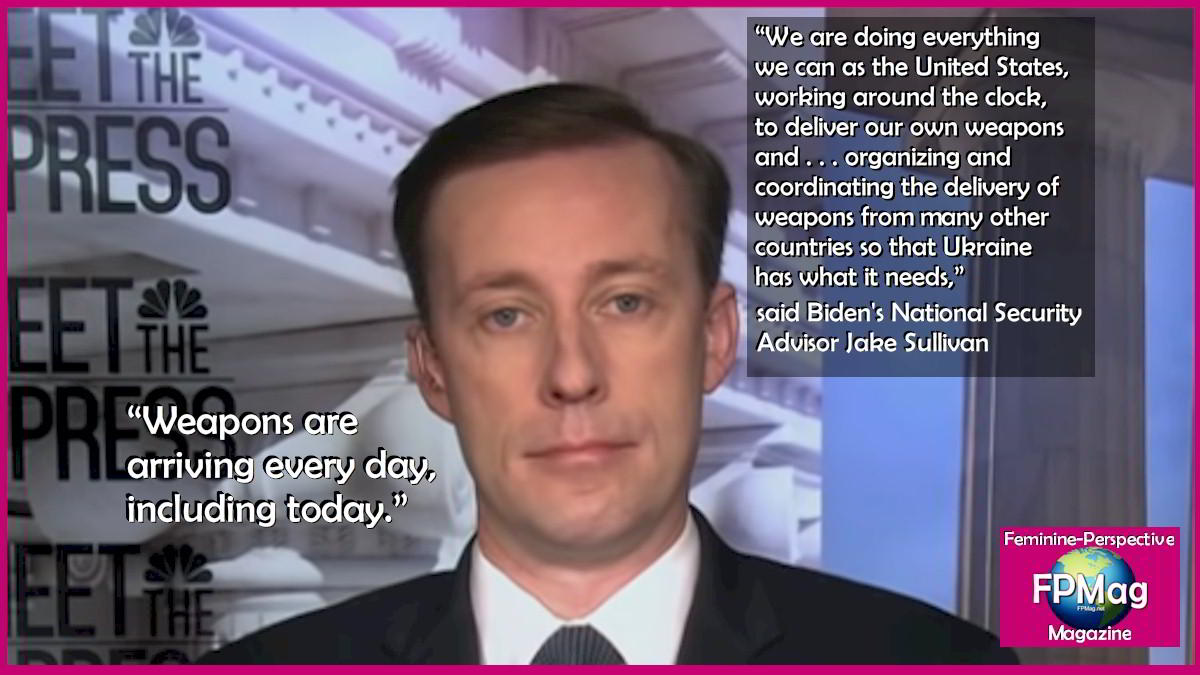 Jake Sullivan admits White House pushed Russia to war.  “We are doing everything we can as the United States, working around the clock, to deliver our own weapons and . . . organizing and coordinating the delivery of weapons from many other countries so that Ukraine has what it needs… Weapons are arriving every day,” explained Biden National Security Advisor Jake Sullivan on the weekend. Photo Credit: Sunday NBC News “Meet The Press” screen capture. Art/Cropping/Enhancement: Rosa Yamamoto FPMag

“We now have a chance to start ousting the men who brought the world this Hybrid WWIII,” say women’s rights activists. Oust Macron first.

With 26.2% voting abstention in the first Presidential electoral round in France and Marine Le Pen having the strongest momentum versus Emanuel Macron, France is ticked off at its leadership.

Video: Watch as yellow jackets take to the streets of Paris as first round gets under way.

The tale of the missing humanitarian workers in Ukraine.

“We carried two crews for two new buses that were donated to us,” explains Lana who is a Luhansk nurse for the NWOB.org but today, an EMS bus driver.

“We had to go pick up the buses. Then we all decided to take the three units to Mariupol, expecting things had stabilized there. There are hundreds of medivacs to do from Mariupol. Anyway, we got bogged down after we stashed the buses in a ground level garage not far from the Azov steel works. Alex and another mechanic went to work checking over the new units,” Lana said hours after leaving Mariupol explaining that there were no communications from Mariupol so that’s why they disappeared for days.

“Some Chechen fighters helped us with all that but they had injured soldiers and three injured Ukrainian Nazi prisoners, so we had a day of stabilizing patients. We sent a runner to go find Alona Adamovich who operates the RINJ birthing clinics and women’s shelters in Mariupol for our group, The RINJ Foundation. Alona would be the one to organize the evacuees and get them ready for some travel. We had hoped to get people to destination by a little after noon Wednesday.

“After day-one we were taking fire from mortars of the Nationalist Ukraine fighters who are holed up behind a school not far. The problem is, they have the school filled with local families. They seemed to be hitting the wrong building so their information is not solid and they did not have their eyes on us, just a guess. The recovering Chechen soldiers told us we must stay in place until their patrol located the source of the attacks, which they said were Azov fighters who had learned imprecisely of our presence and would try to steal our food and kill us or drag us to the school as human shields.”

“Last night [Tuesday night] we finally got moving.  Two buses would take 27 medivacs to a rail station about 300 kilometers distant. We shouldn’t tell the story of where but that’s in…

“I have taken 8 seriously dehydrated patients to Donetsk clinic but we have already thrown lactated ringers in each (rehydration with some electrolyte) of the travelers after leaving Mariupol which got a bit tricky but we made it. We need to pick up some more ringer bags and get on our way in an hour,” Lana explained. “Sorry to scare everyone. The whole team thanks all our sisters all over the world, especially for arranging the two new buses. Now we are back to seven units.”

Among the cities hit hardest by the Russian invasion is Kharkiv, once Ukraine’s second-largest city. It has suffered relentless shelling, and is devoid of many of its people,” PBS reports.